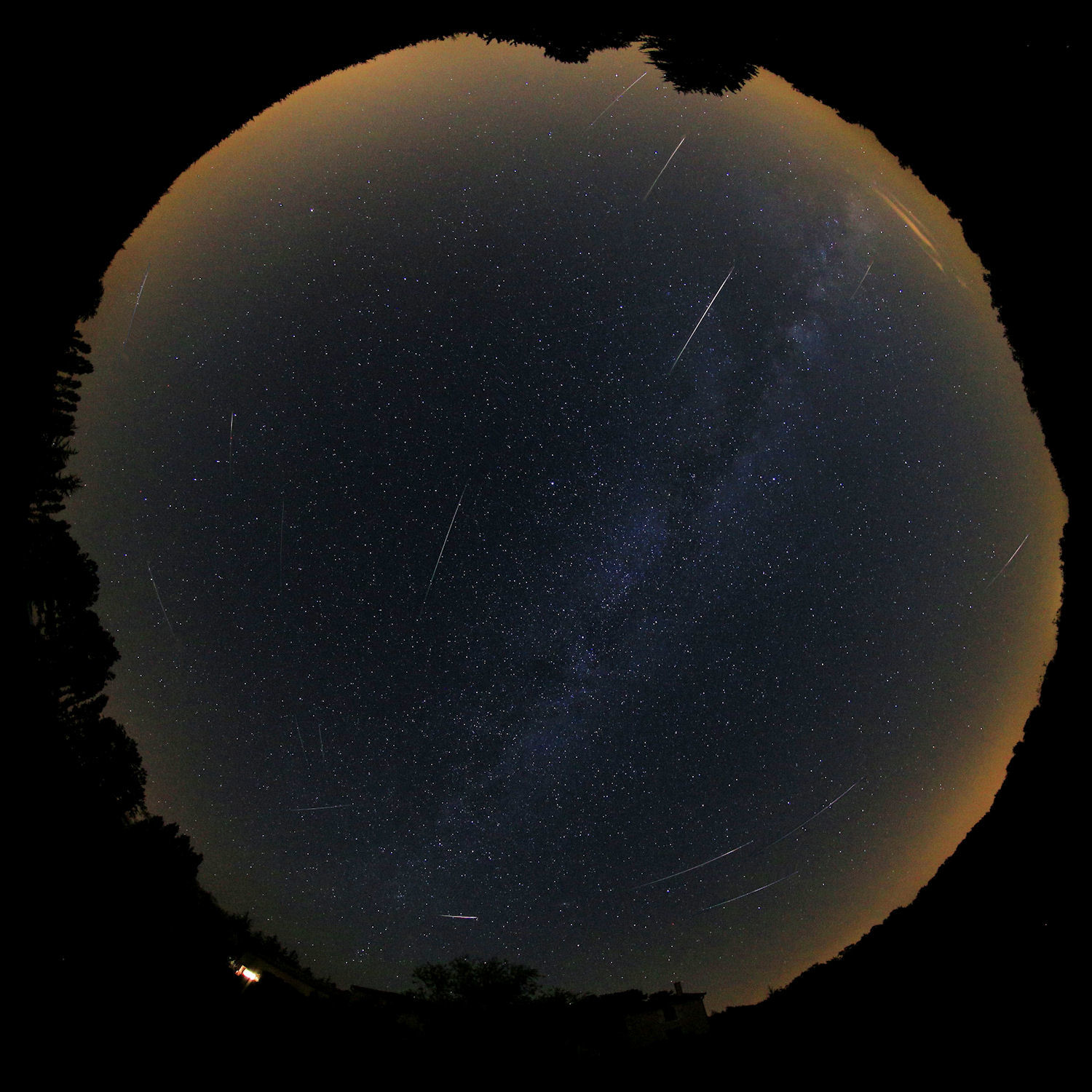 2015 turned out to be a successful year after a few less lucky years and this with CAMS, the all-sky camera as well as with the visual observations. This report covers mainly the visual work.

The year had a good start with some clear skies during the Quadrantids night of January 3-4 illuminated by the Moon. During 2.23 hours of effective observing time (limiting magnitude between 5.2 and 5.5, I counted 45 Quadrantids, 1 Anthelion and 5 sporadic meteors. Some ZHR calculations based on my own observations are listed in Table 1.

A nice period with many clear nights occurred during the second half of April. Unfortunately the night of the maximum of the Lyrids remained completely overcast. During 20.75 hours of effective observing time I saw 187 meteors of which 49 were Lyrids. I made my first global analyzes on the 2015 Lyrids, based on the data collected by IMO as well as the data of observers who do not report to the IMO. The results have been published in eRadiant 2015-3 (Miskotte, 2015).

Together with Michel Vandeputte, Inneke Vanderkerken, Laurien and Casper ter Kuile, I enjoyed two weeks of meteor observing from Revest du Bion (Alpes de Haute Provence – Southern France). We used a Canon EOS 6D with a Canon EF 8-15 mm F 4.0 “type L” zoom fish eye lens as an all sky camera. Michel had a so called SQM meter for the determination of the brightness of the night sky.

Revest du Bion is a small village at 900m altitude settled on ‘the plateau of Albion’ between the mountain chains of the famous Mont Ventoux and Montagne de Lure. Light pollution is very minor. The first two nights were totally clouded out (August 8–9 and 9–10) by a small depression with lots of rain showers and thunderstorms. On August 10, high pressure determined the weather, creating a new series of clear skies and hot temperatures during daylight. August 10–11 and 11–12 were totally clear. The Perseids shower was getting stronger, with some beautiful fireballs especially during August 11–12. Rates got over 50 Perseids an hour.

During August 10–11 the sky cleared out in the evening and I counted 211 meteors with 35 Perseids as highest hourly count. I observed two fireballs, both Perseids of magnitude -4.

The next night (August 11–12) was totally clear. Hourly counts got up to 60 Perseids in the early morning hours. In total I observed 329 meteors, amongst them 211 Perseids. Some beautiful Perseids were seen.

Let’s focus on the main maximum night! It was a bit tricky with a new frontal system moving in from the west but it was all about the timing of this system. The night started clear, but it became a bit hazy after midnight, still with a SQM over 21, we should not complain. The night started with a bunch of bright Perseids before midnight followed by a small lull in activity. Then the shower regained its forces and peaked over 100 meteors an hour, again some nice fireballs up to magnitude -6! At 23:55 UT the first real fireball was seen, a Perseid of magnitude -6 from Perseus towards Camelopardalis. The persistent train was visible for one minute. Just two minutes later a magnitude -4 Perseid appeared near Polaris! At 00:18 UT a blueish Perseid of magnitude -4 flashed through the Big Dipper, at 00:35 UT a blue-white Perseid of magnitude -3 was seen in Pisces Austrinus and at last a Perseid of magnitude -4 in Perseus. The all sky camera captured all these fireballs, but also two more: at 21:58 UT a magnitude -4 Perseid low in the south and at 22:49 UT a -6 Perseid also in southern direction. We were facing northeast and this way we missed these fireballs.

At 02:30 UT the first traces of high clouds moved in rapidly from the west. This was not critical but the limited magnitude decreased a bit. Anyway the morning twilight occurred pretty fast after 03h UT, as usual. This was a great night! I observed 426 meteors (including 345 Perseids) in 6.85 hours effective observing time.

From my point of view, this seemed to be a normal Perseids maximum, perhaps a bit stronger than usual thanks to the upcoming Jovian perturbation on the stream for the period 2015–2017, a minor effect in 2015? Hopefully this will be a lot stronger next year.

Some frontal rain showers moved in on August 13 with quite heavy thunderstorms during the evening hours and the first part of the night. No Perseids but an impressive electrical storm during a large part of August 13–14. Anyway; we stayed alert for possible clear skies after the bad weather front, and yes, in no time we faced crystal clear skies after 01:30 UT in the morning of August 14. Michel measured SQM higher than 21.50, a personal record value for us from the French Provence! The Zodiacal light conus was unusually bright and reached as far as Pisces! Unfortunately, our observing window was short (1.5 hours till morning twilight) but the meteor activity was very impressive with high Perseids rates!

Also August 14–15 and 15–16 were influenced by a French low pressure system. Still, we were able to observe some hours under good observing conditions, but no complete nights. On August 16, the weather became calm and the Mistral winds stabilized the local climate. Nights became pretty cold for the time of season but it stayed totally clear. We had good observing sessions for August 16–17, 17–18, 18–19, 19–20, 21–22. Only during 20–21, there were more clouds. The Perseids decreased in activity after August 17. The Kappa Cygnids displayed low activity this year and were disappointing. Another highlight was a -10 sporadic fireball on August 16, 23:20 UT with multiple fragmentations seen through the trees in northern direction. It was seen by few people in France, Belgium and Germany. 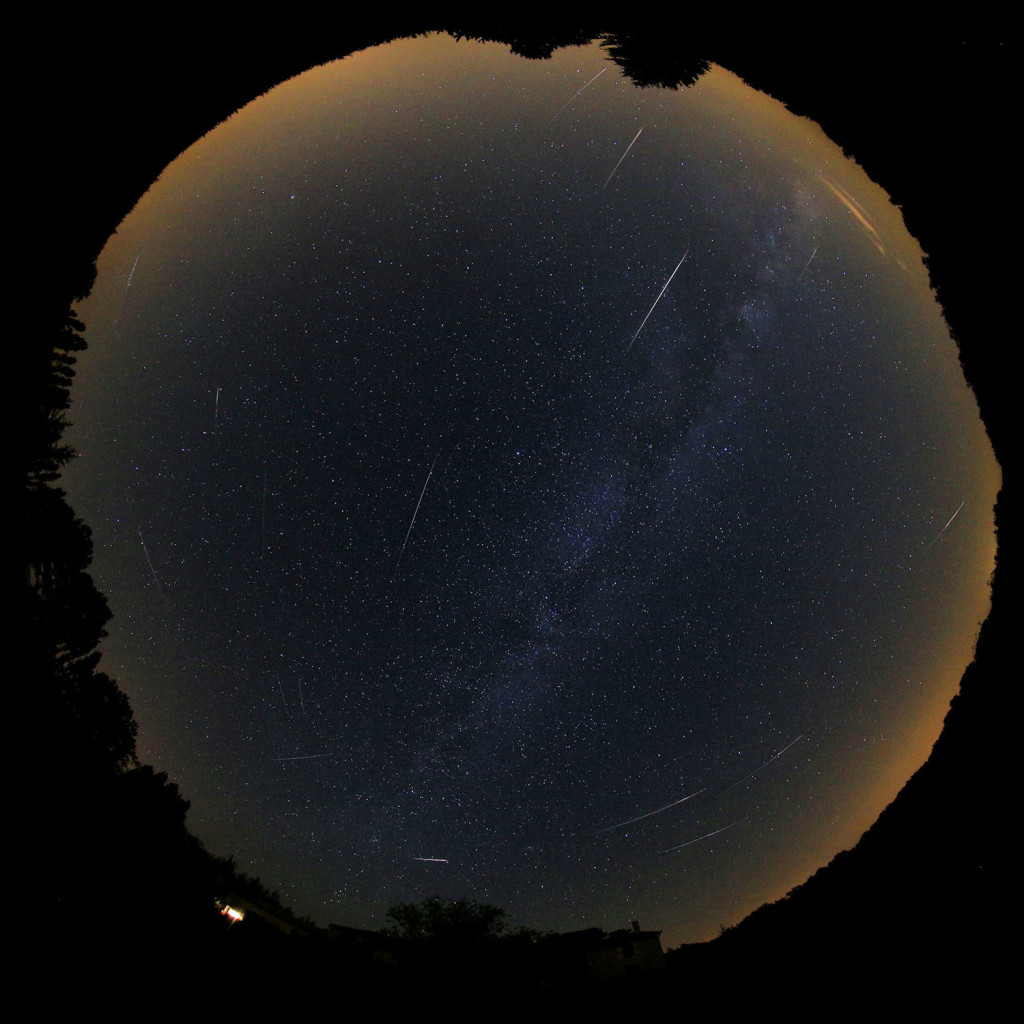 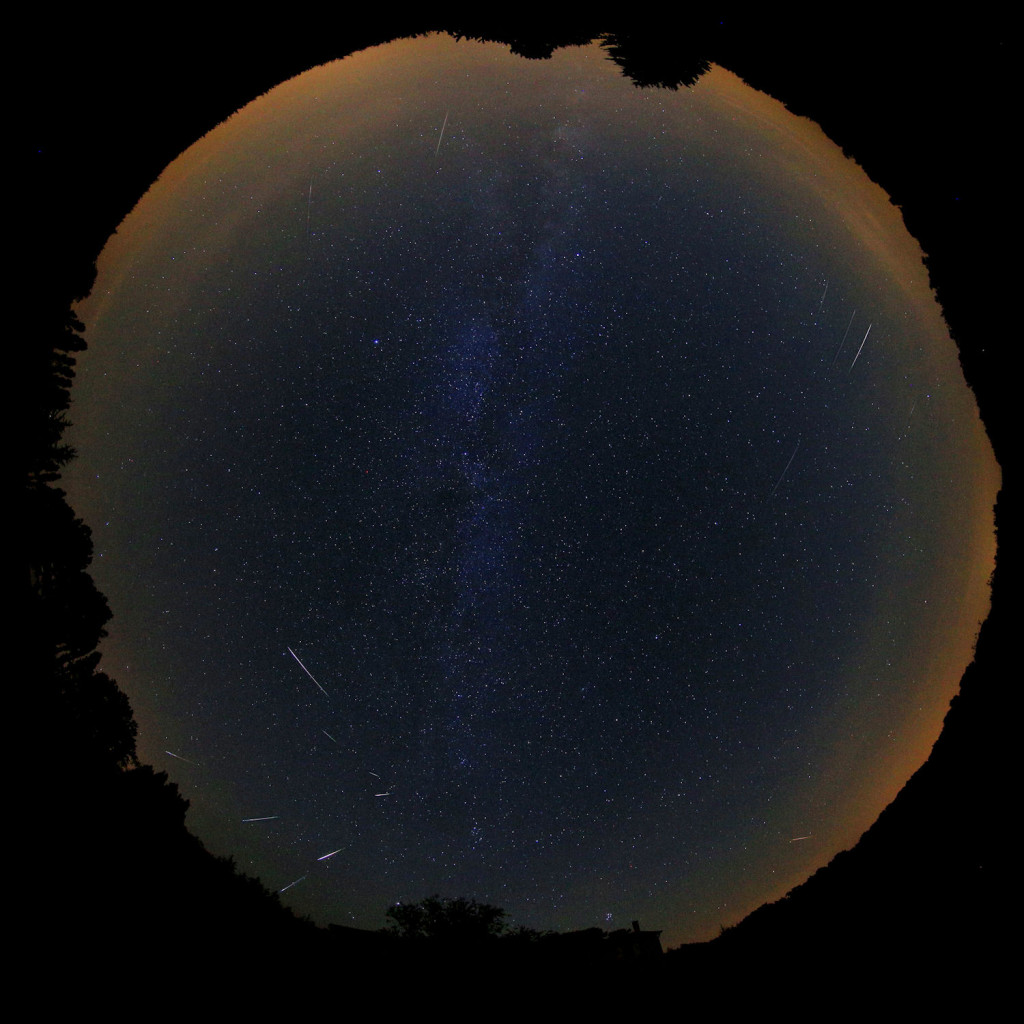 The next meteor stream was the Orionids, but not a single cloudless night occurred, only some rare clear sky in between clouds. The nights 10-11 and 11-12 October had clear sky and during the first night I witnessed a bright fireball low in the Western sky which reached a brightness of magnitude -8 up to -10.

According to astronomer David Asher (Asher and Izumi, 1993; Asher and Clube, 1993) 2015 should be a rich “Taurid swarm” year. Indeed during 5 nights and 12.2 hour of effective observing time an enhanced Taurid activity has been observed. No bright fireballs were seen such as was the case in 2005 when I saw some of magnitude -6, one of -8 and one of -10, but it was very obvious that the ZHR was higher than usual with many bright meteors in the range of +1 till -2. ZHR calculations based on my own observational data resulted often in values between 10 and 15. In 2016 I intend to make an analysis about the 2015 Taurids and I will publish the results in eRadiant and in eMeteorNews.

The traditional Leonids maximum was clouded out, but the night 22-23 November had clear sky and allowed to observe for any Leonid activity. A dust trail of comet 55P/Tempel-Tuttle released in the year 636 could produce some activity. A number of Leonids were effectively observed visually and two were photographed by my all-sky camera (Figure 3).

The weather forecasts for the Geminids in the Netherlands were very bad. Therefore, the author, Carl Johannink and Sietse Dijkstra decided to travel to the Black Forest in Southern Germany. Here we could observe during a clear night 13-14 December but unfortunately 14-15 December was cloudy. At this moment we are still working on a detailed analysis of the 2015 Geminids and these results will be published in eRadiant and eMeteorNews. 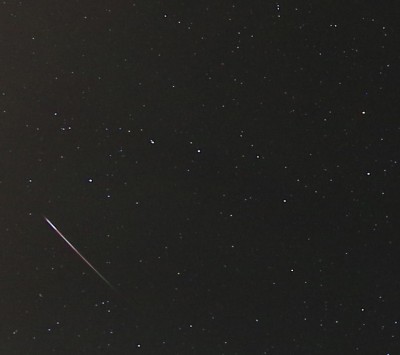 Since I started on 15 March 2012 with the all-sky work, a work year always runs from 16 March till 15 March of the next year. The system consists of a Canon 40D equipped with a Sigma 4.5 mm F2.8 EX DC Circular fish eye. There is a rotating shutter in front of the lens with 8.333 interruptions per second. The period from 16 March 2014 until 15 March 2015 collected 43 fireballs. The most beautiful fireball was a -8 sporadic meteor captured on 11 March 2015 at ~0h00m UT (Figure 4). Calculations by Felix Bettonvil and Marco Langbroek do not exclude a possible dropping of some meteorites in the Gaasterland, close to the coast of the Ijsselmeer. 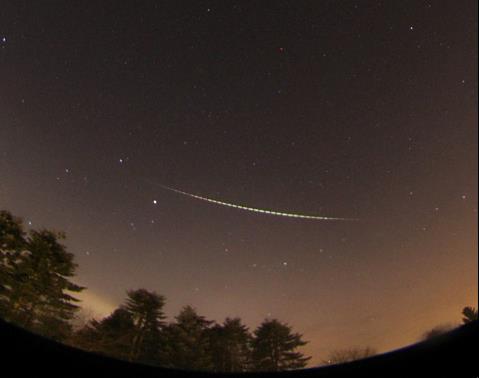 The all-sky camera could photograph on 234 nights during which the camera made 97177 exposures during 1929.11 hours.

The author wishes to thank Paul Roggemans and Michel Vandeputte for translating this article.