Greetings again all,
My Cinco de Mayo celebration started early in the pre-dawn this morning as I managed to get out on the “meteor roof” in St. Augustine, Florida again for 1.5 hours and the ETAs responded very well indeed. There was a noticeable uptick in their rates this morning and they might have approached 20 an hour from my location had twilight not interfered. All told, I had 23 ETAs and 17 others for 40 total meteors during the session. Here’s my data:

17 of the 23 ETAs left visible trains, predominate colors were yellow and orange tints.

Once again, the watch got off to a fast start as less than five minutes into it, I saw two perfectly simultaneous meteors – one little sporadic and one majestic +2 ETA hit at exactly the same instant not too far apart from each other on the sky. Love it when that happens…;o).

Besides that cool coincidence, ETA activity was pretty much evenly spread out through the watch, with just one spurt of 5 ETAs all hitting within about ten minutes of each other midway through the first hour. A majority of the ETAs left long trains along their paths, even some of the fainter ones, with an average meteor path length of easily 20 to 30 degrees in many cases.

The increase in ETA rates seemed very gradual and was no doubt caused soley by the radiant getting higher in the sky and not by any ramp up within the stream. After not seeing any ELYs in the first hour, two within a few minutes of each other happened in the second period.

I was aided this morning by the cool, clear, crisp air that flowed in quickly after the front passage. The timing was perfect as it had been pouring rain last night at 10:00 p.m. Local Time! The temperature for the watch was about 55 degrees Fahrenheit or 12.77 degrees Celsius. That’s mighty chilly for Florida on a May morning, but I was not complaining! The good weather should continue for us for at least a couple more morning, so I’ll be back out tomorrow. 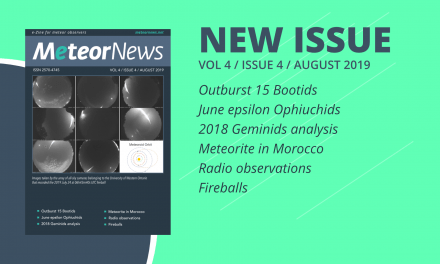