After October 2015 the typical poor weather season of autumn and winter months limited the monthly number of orbits collected by CAMS@Benelux. The first months the weather was definitely less cooperative compared to one year before and it got worse until mid-May to July when CAMS Benelux faced its worst time weather wise. August 2016 compensated the bad results for previous months with a record number of clear nights and orbits collected. The maximum night of the Perseids, 12-13 August, will remain a legendary night for years to come with as many as 830 orbits collected in a single night. End 2015 the global CAMS database contained over 340000 orbits and will grow with over 100000 orbits per year from 2016 onwards.

End 2015 CAMS@Benelux had collected a grand total of 35310 orbits, a much better result than what any participant had ever expected. The unstable climate of the West European Low Lands isn’t favorable for amateur astronomy and that also applies to CAMS. The CAMS network exceeds all expectations in the number of nights that the network can collect orbital data as well as by the number of simultaneous meteors captured in a single clear night without any significant shower activity.

The Watec cameras prove to be exceptionally suitable to deal with light pollution, even a Full Moon barely hampers to capture large numbers of meteors. Almost completely overcast nights with just some small periods of clear sky prove sufficient to still capture few simultaneous meteors. The use of AUTO-CAMS which operates the cameras all nights regardless the weather as well as the perseverance of the CAMS operators explain why during so many nights meteors can be recorded.

From mid-May 2016 it were the pluviometers that broke all records, overcast, grey weather with mainly completely cloudy nights kept the number of orbits for June 2016 very low with as little as 345 orbits in 18 nights (779 orbits in 20 nights in 2015). In general the weather wasn’t favorable for CAMS@Benelux in the first 6 months of 2016. In this 6-month period 5087 orbits were collected, a bit less than the 5165 orbits for the same period in 2015, obtained in 2015 with fewer cameras and less stations. In Figure 2 you can see how the number of available cameras continues to increase (the green line) while the average number of cameras that manage to collect orbits remains stable at the same level for many months with the weather being responsible for the less favorable circumstances. 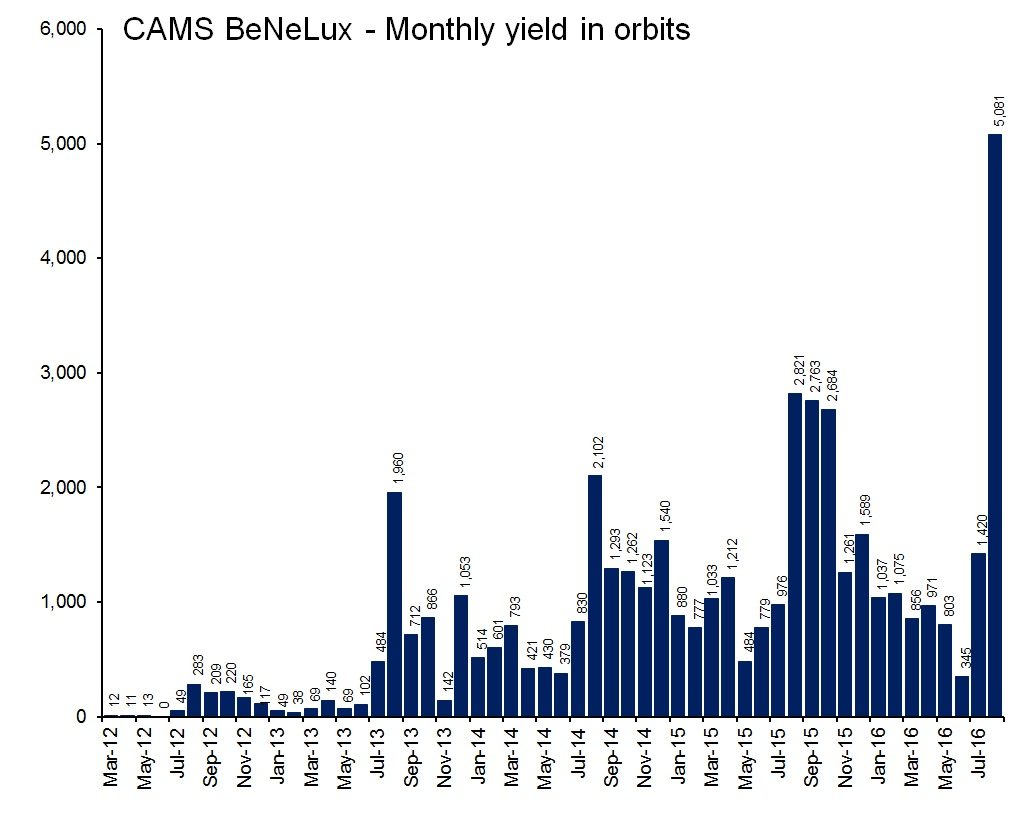 Figure 1, the monthly number of orbits collected by CAMS@Benelux. 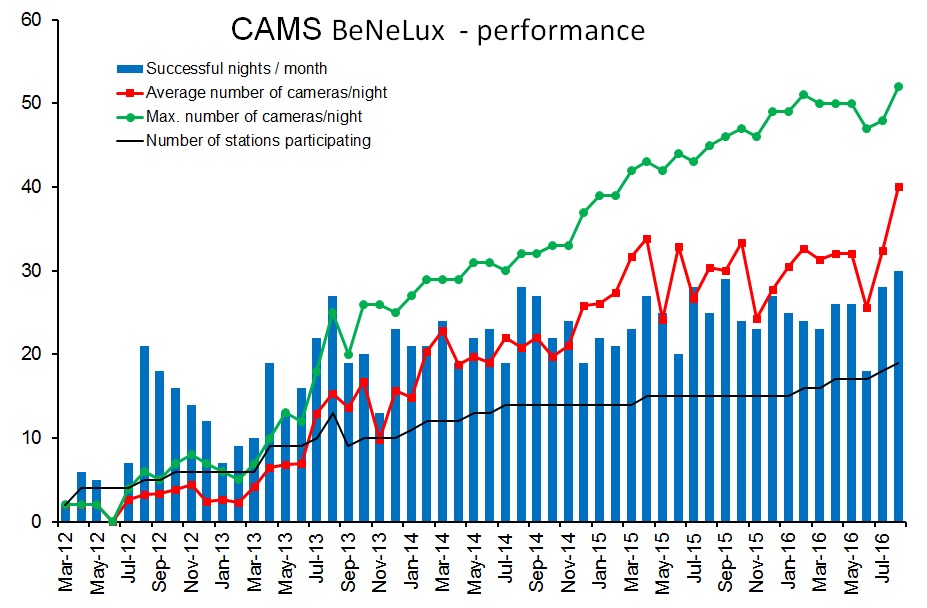 July and August 2016: back from hell to heaven

The period with exceptional bad weather that started about mid-May and ruined most of June also continued into July 2016, clear nights remained rare, but 28 of the July nights allowed some parts of the CAMS network to function and to sample orbits. Stable good weather arrived on time for the Perseids 2016 with from 3-4 August onwards all nights clear sky except for a few partly clouded nights. Unfortunately 11-12 August was mostly cloudy so that CAMS@Benelux missed most of the predicted Perseid outburst that night. This was compensated by a perfect clear sky for the traditional Perseid maximum 12-13 August. Being for more than 40 years involved with meteor observing I can remember only very few years that allowed observing 12-13 August. The exceptional good circumstances of 2016 are something of a once in a lifetime in our climate. An absolute record of 830 orbits was collected in a single night. Several other August nights produced over 200 orbits per night making a grand total for August 2016 of 5081 orbits collected in a single month. Figure 1 illustrates well how August 2016 outnumbers all previous months. August 2016 will remain for long a legendary month and its results will be very difficult to beat, even with a significant increase in the number of cameras.

23-24 August 2016 had the 10000nd orbit of 2016 registered. With this most successful month ever following immediately after the worst period with bad weather, the contrast could not be bigger.

Meanwhile the grand totals for the CAMS networks worldwide are available for 2015:

End of 2015 the CAMS database contained 340000 meteor orbits. Figure 3 illustrates the performance of CAMS in past years. In 2016 new CAMS networks are being set up like CAMS@United Arab Emirates and CAMS@Arizona.

CAMS@Benelux continues to expand and has now reached a capacity comparable to the Japanese network Sonotaco. As for the global CAMS database from 2016 onwards over 100000 orbits are expected to be added to the CAMS database. This should not only allow to increase the resolution in orbit associations over a long term, but this will also improve the chances to detect short lived periodic activity of minor showers that escaped detection so far. 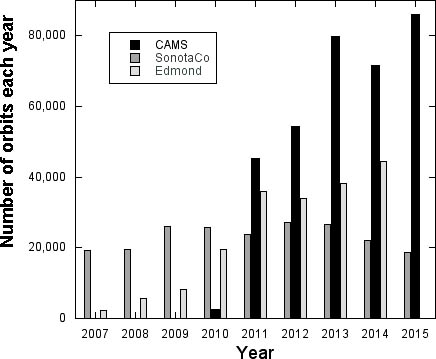 CAMS@Benelux is a video camera network and its success depends completely on the teamwork of many volunteers involved. For CAMS@Benelux until August 2016 the volunteers were:

Peter Jenniskens coordinates the global CAMS project and Pete Gural is the man behind the CAMS software and technology.