The minor shower 66 Draconid (541 SDD) which was discovered by the Croatian Meteor Network (Šegon et al., 2014) has a mean orbit based on 43 meteors, similar to the orbit of 2001 XD. The asteroid 2001 XD has an orbit typical for Jupiter family comets and therefore may be a dormant comet. The shower activity ranges from November 23 until December 21.

According to Jérémie Vaubaillon there is a reasonable good encounter factor (0.67, see for more information the recent paper Vaubaillon, 2016) indicating a possible enhanced activity on December 2 (~21h30m UT) and December 3 (~7h UT), from a radiant at RA = 310° and decl. = +64°. These meteors are very slow moving with an entrance velocity of 21 km/s.

All meteor observers are encouraged to pay attention to any possible meteors from this source, although no outburst or any anything spectacular has to be expected.

The orbital data are:

Vaubaillon J. (2016). “A (revised) confidence index for the forecasting of meteor showers”. In Roggemans A. and Roggemans P., editors, Proceedings of the International Meteor Conference, Egmond, the Netherlands, 2-5 June 2016. Pages 302–303. 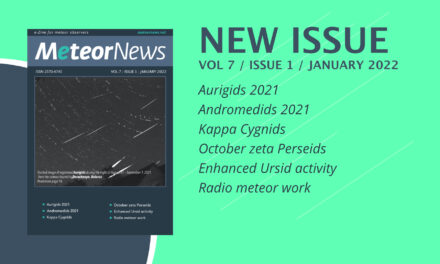