At that time in central and northern Italy the nautical twilight was already finished, the Sun was at -17° below the horizon in the north-east and at -14 ° in the north-west.  Due to the evening hour and to the brightness of the meteor, there have been many visual witnesses, mainly occasional.

The fireball was reported also visually by many people from France and Switzerland through the IMO fireball platform. 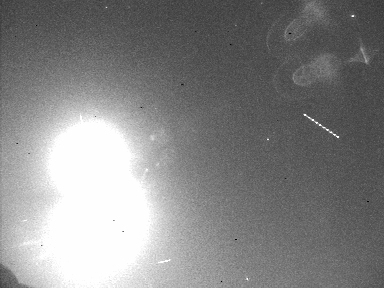 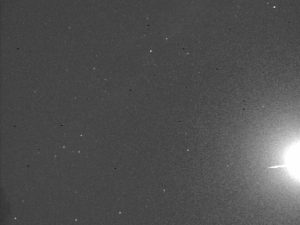 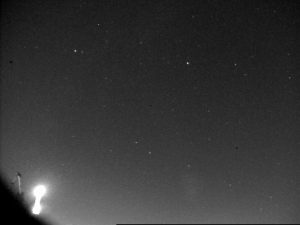 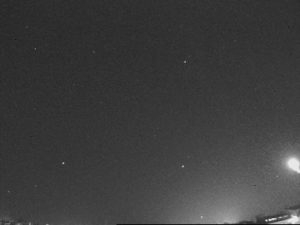 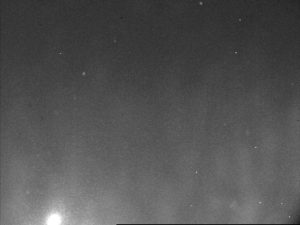 Even a photographic image (Figure 6) has been received from central Italy (from Lago Trasimeno (PG), 43.14°N 12.16°E,  obs: Milena Pieri).
Three useful observations were selected from the Italian visual reports, including informations about the firaball appearance:
–  Report from Casole d’Elsa 43.31°N 11.14°E (obs: M.Cabibbo)
–  Report from Verona 45.47°N 11.02°E (obs: M.Viviani)
–  Report from Pontedera 43.66°N 10.65°E (obs: C.Casola).
Most of the observations from France and Switzerland were not very useful, because these were  too inaccurate or affected by errors due to the large distance.

The fireball was also recorded by the radio station located in Venice Planetarium (45.416°N 12.376°E).
Figure 7 shows graphically the persistence of the radio signal transmitted on the frequency 143.05 mHz from the Graves radar. The pulses were mirrored landwards by the atmospheric layers, ionized by the meteoroid.

The map in Figure 8 shows the projection on the ground of the atmospheric path of the fireball above the Ligurian Sea and the shooting visuals from individual stations. 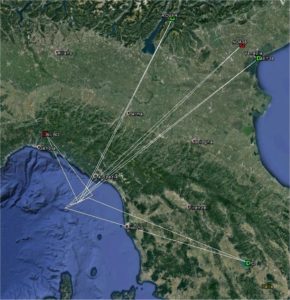 Calculations were performed with IMG team software. Only the triangulations with high convergence angles and with low speed differences have been selected.
In the images below (Figures 9-10-11-12) the geometries of the atmospheric path of the fireball as seen from the north, east, west and south are indicated. 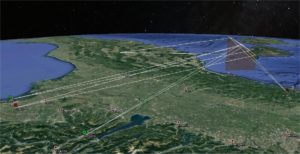 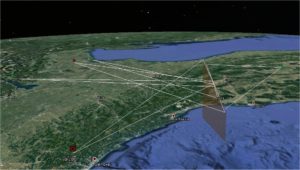 The best circumstances occurred for BILBO and STG38 cams, which were closer and with direction almost perpendicular to the plane of the meteor.
Combining the photographic data available, it appears that the meteoroid began to be visible in the atmosphere at an elevation of 92.3 km and ended at about 38 km height, after a sequence of explosions and spectacular flares, clearly visible in the video captured by BILBO [2].

Figure 13 shows some of the meteoroid orbits resulting from the better triangulations. 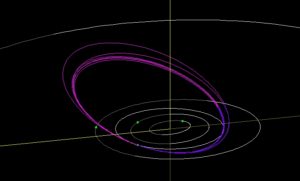