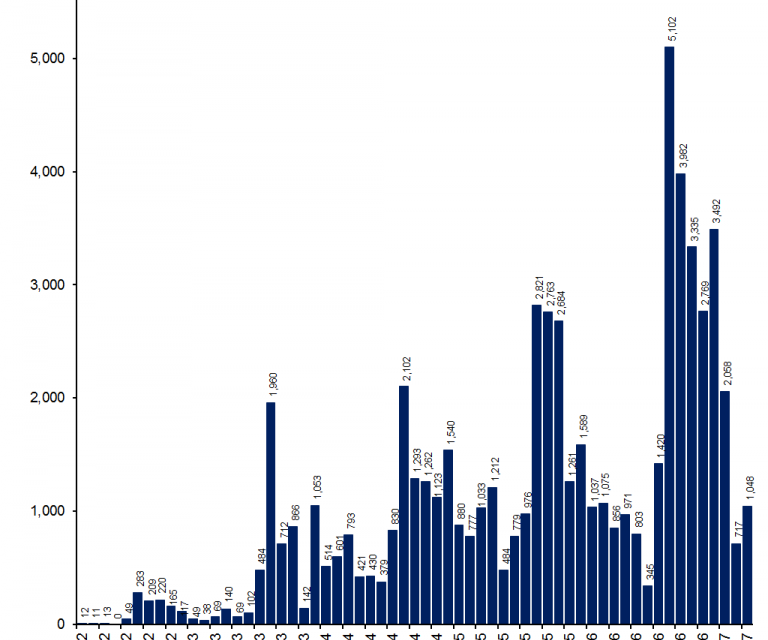 The first quarter of 2017 allowed successfully collecting orbits during 65 nights on a total of 90 nights. 3823 orbits were added to the CAMS database in this period. While a fair number of clear nights appeared in January and during the last 10 days of March, the period in between was characterized by poor weather conditions. February 2017 was in particular unfavorable for any astronomy work.

Although the nights are long during the winter months, the number of meteors collected by any camera network is much lower in the first quarter of the year. Except for the Quadrantids, no major showers are active and the overall background activity gets at its lowest level of the year towards the end of the first quarter. The low activity level makes this period of the year the least interesting for visual meteor observing. Most very active meteor observers tend to take a break in this period with as a consequence that during this part of the year Earth crosses a rather unexplored region of the solar system regarding the meteoroid population.

Permanently operated camera networks such as CAMS improved the knowledge about meteor activity in this time of the year. Although weather circumstances tend to be poor in these winter months, we still manage to collect significant numbers of orbits. 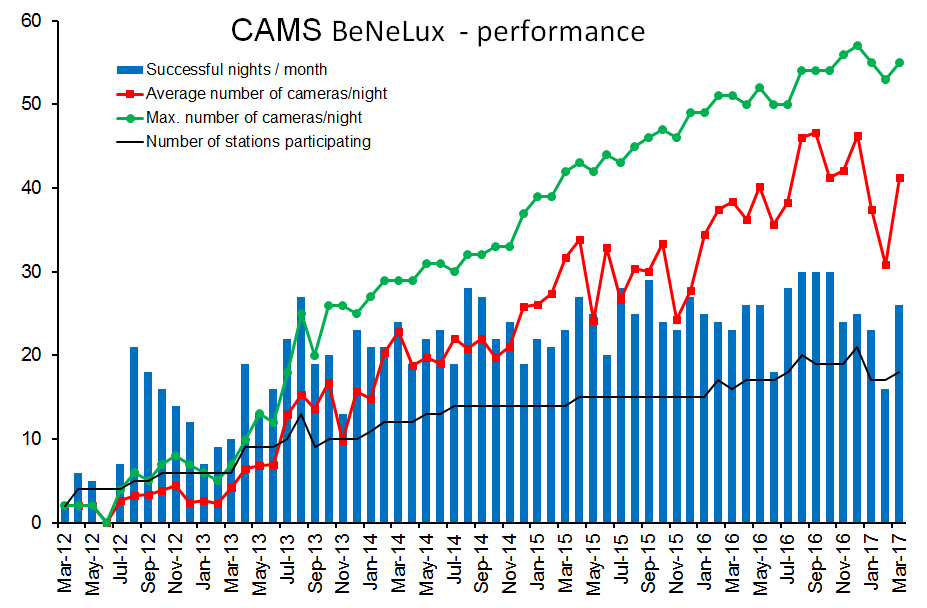 The number of nights that allowed collecting meteor orbits was comparable to January in previous 3 years, but the number of collected orbits was significantly better, about twice as many as in previous years. The Quadrantids night 3-4 January was spoiled by bad weather. The large number of orbits was obtained thanks to a number of network wide, clear nights with about 200 or more orbits a night. The night 2-3 January was very productive with 303 orbits, including a likely meteorite dropping fireball (see Roggemans, 2017).

January offers very long observing nights with a still rich overall meteor activity, to score large numbers of orbits is a matter of having network wide clear nights that allow all cameras at all stations to run simultaneously. With an average of 37.4 of the 55 available cameras capturing, January 2017 was doing less good than December 2016 when on average 46.3 cameras (on 57 operational) could capture. Reason for this is unstable weather that prevented several stations from successfully recording meteors. The bulk of the January orbits were obtained during 7 overall clear nights.

Each year of the 5 year CAMS history has a period of time with the worst possible weather circumstances. For 2017 the month of February proves a good candidate to become the worst month of 2017.

Only 16 nights allowed to collect orbits and on average 30.9 cameras of the 53 operational cameras could run. A much worse February than what we got past few years. Only one night, 13-14 February offered a network wide clear night. 717 orbits for an entire month is a rather poor result when considering the number of cameras currently available. All we need is favorable weather and that we did not get this month.

March continued the rather poor weather from February until 15-16 March when a first clear night allowed all stations to capture meteors. The last 10 nights of March brought an improvement and ended March 2017 with a better score than previous years. 41.3 cameras on average could run on a total of 55 operational cameras. As many as 26 nights produced orbits this month.

On March 12 the CAMS network had its coordination meeting in Oostkapelle, Netherlands, hosted by Klaas Jobse. See MeteorNews for the report on this meeting.

End of March a new CAMS station joined the network at Niederkruechten in Germany with CAMS 803 operated by Hans Schremmer.

The first quarter of 2017 was affected by several weeks of rather poor weather. The number of collected orbits did not reflect the increased capacity of the network with several extra cameras compared to previous years. However, weather remains what it is in our climate. Taking our climate into account it still remains amazing how many nights we manage to obtain some orbits!

The CAMS@BeNeLux team that contributed orbits for the quarter 2017Q1: