Routine CAMS BeNeLux observations during the nights of May 9–10 and May 10–11 collected 26 meteors belonging to the eta Lyrids (145 ELY), which are associated with comet IRAS-Araki-Alcock (C/1983 H1). Further searches on the nights around this peak produced another 6 candidates. Radiant positions and orbital elements are in good agreement with previous CAMS results (Jenniskens et al., 2016). A short summary of historical visual observations is also given.

1  The origin of the Eta-Lyrids

The η-Lyrids are the remainders from the long periodic comet C/1983 H1, better known as comet IRAS-Araki-Alcock with a periodicity of about 1000 years. The comet has been discovered in 1983 by the InfraRed Astronomical Satellite, a Dutch-British-American joint venture, as well as by the Japanese amateur Araki and the British amateur Alcock. Alcock discovered this comet by searching the sky with a simple binoculars, watching through his window.

Each year around May 10 some meteor activity is noted from the region Cygnus/Lyra by visual observers. Already in 1985 Peter Jenniskens wrote about possible meteor activity from this comet (Jenniskens, 1985). The maximum should occur around the night 8–9 May. 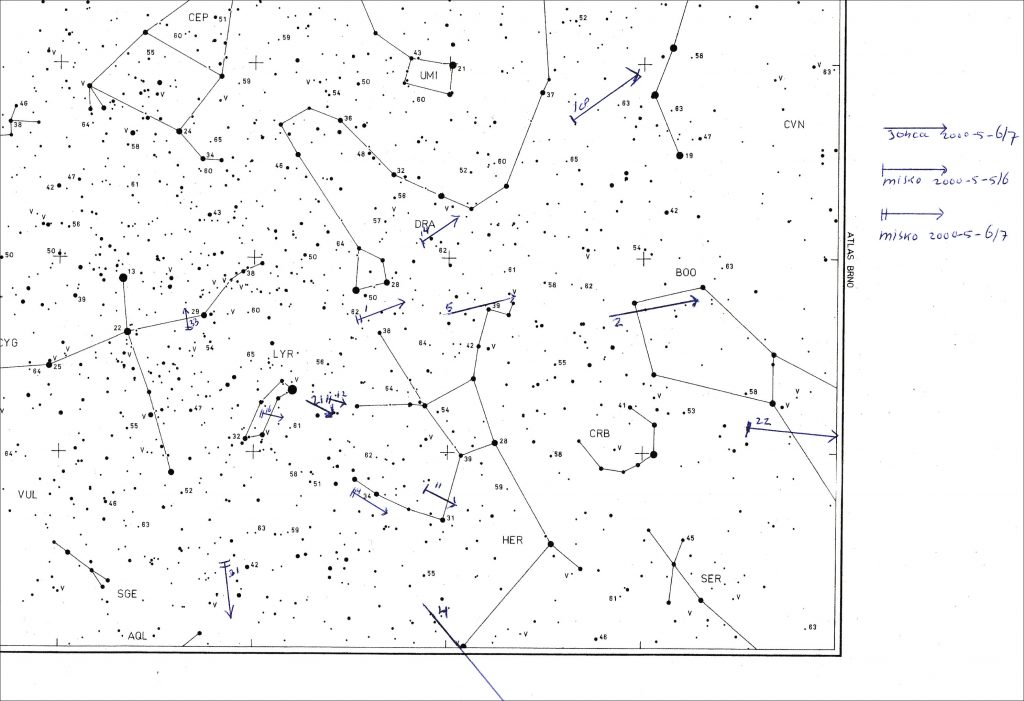 Figure 1 – Part of the plotted Eta Lyrids by Carl Johannink and Koen Miskotte. The data was obtained during the night 6–7 May 2000. Map: Atlas Brno. 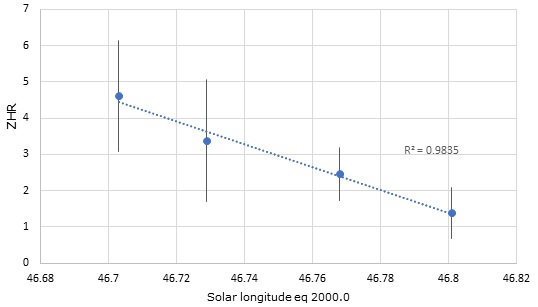 Figure 2 – ZHR profile for the night of 6–7 May 2000, based on 39 Eta Lyrids observed by Carl Johannink, Marco Langbroek and Koen Miskotte.

Peter Jenniskens mentioned in his article a basic investigation across the DMS archive of visual reports for possible observations of Eta Lyrids in 1982 and 1983. A ZHR of 2.0 was derived at 1982 May 9.052. The observations were made by Rudolf Veltman (†). Unfortunately no more attention was paid to this shower in the 1980s and 1990s. Only few shower members were recorded in this period. This situation changed in 2000. In that year a considerable number of Eta Lyrids could be observed during the nights 5–6 and especially 6–7 May at Biddinghuizen and Lattrop under very good circumstances (lm 6.6/6.7). Marco Langbroek calculated a ZHR of 7 for the night 6–7 May. It was striking that the activity was reasonable strong at the beginning of the night but declined during the night while the radiant elevation got higher during the night. Figure 2 shows a ZHR profile for that night. This ZHR profile has been calculated mid-May 2017 by Koen Miskotte. Of course we should not draw too soon conclusions from this as this is an analyses based on 39 meteors with an assumed population index of r = 2.50.

Koen Miskotte has also searched for ELY data in the DMS visual report archive. Table 1 lists the data. It is obvious that many ELYs were observed in 2000. This is also the case in 2001, 2008 and 2016. Unfortunately the data for each year is rather fragmentary. The only careful conclusion one can draw from Table 1 is that 8–9 May is not necessarily the night of maximum activity. Significant numbers of ELYs were reported as well before as after the time of maximum activity. 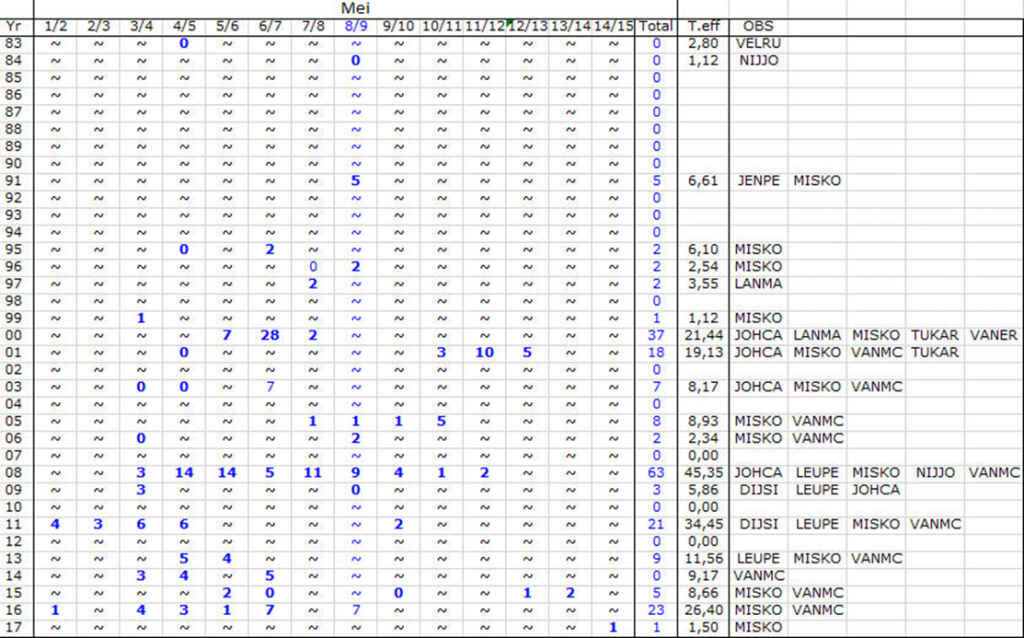 After a rather unstable first week with poor weather a period with several clear nights made observations possible for most of the BeNeLux region. As a result more than 300 double station meteors were collected by the CAMS systems during 8–9, 9–10 and 10–11 May.

While reducing the data for the night of 9–10 May a number of meteors with a radiant position near the η-Lyrids (145 ELY) caught attention. The orbits obtained for these meteors were compared to the orbit of comet C/1983 H1 (MPC 8272), using the D-criterion of Drummond (Drummond, 1981).

During the next two nights, 9–10 and 10–11 May, as many as respectively 9 and 17 meteors were captured for which the orbits fit the D-criterion to be related to the dust of the comet. Finally in the night of 13–14 May at 23h49m22s UT a last candidate was registered by the stations Ermelo (352, Koen Miskotte) and Alphen a/d Rijn (360, Robert Haas).

These numbers are remarkable when we compare these with the numbers recorded during previous years with CAMS. The smaller numbers of ELYs captured in the years 2013 – 2016 can be explained by the fact that in the early years less cameras were available. However, the favorable weather around 10 May in 2017 definitely made a big difference. In other years the weather was rather unstable, but still we feel like we cannot completely explain the higher number of ELYs in 2017 by the better weather or extra cameras alone. It looks like the annual activity of this shower is variable from one year to the other. 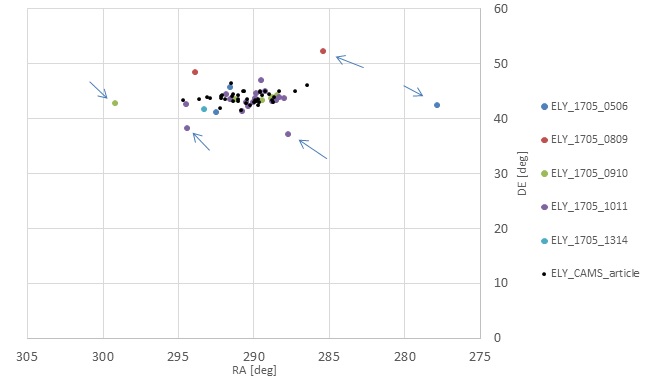 CAMS data of this shower from 2011–2012 did not enable to derive any radiant drift. No radiant drift could be derived from our 2017 data either.

Figure 4 shows the plot of Π against i for these meteors. We see a nice compact concentration of ELYs around Π ~242° (result of ω + Ω) and i ~74°. It is obvious that this is dust from comet IRAS-Araki-Alcock. 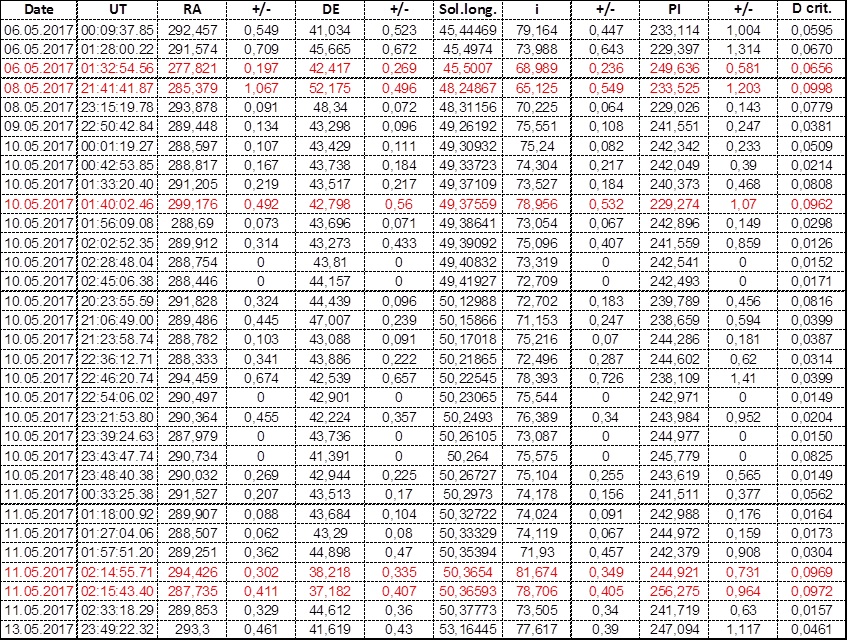 Table 2 – Radiant position and orbital elements Π and i for 32 ELYs (© CAMS BeNeLux).

Both Figure 3 as well as Figure 4 displays a rather dense cloud of dots.

The radiant positions and the values of the orbital elements Π and i for the 32 ELY meteors are listed in Table 2. A few of the double station meteors proved to be at the limit of the D-criterion of Drummond, (Dd < 0.105). These have been marked in red in Table 2. For the remaining 27 ELY-orbits the average value of the D-criterion of Drummond is Dd = 0.038, significant less. We can therefore state that we registered 27 ELYs with certainty and 5 more possible ELYs.

CAMS BeNeLux managed to register a nice activity of the Eta Lyrids. The activity seems to have been higher in 2017 than in the period 2013 until 2016. Having more cameras available and the better weather alone cannot explain the higher number of ELY orbits. It seems that Earth passed through a more dense concentration of dust this year. No radiant drift could be detected. Both radiant positions and orbital elements are in very good agreement with the predicted values.

The authors thank Reinder Bouma for the useful advices and critical proofreading of this paper. Thanks also to all CAMS stations for their efforts and prompt reduction of their data. Thanks to Paul Roggemans for translating this paper from Dutch to English. 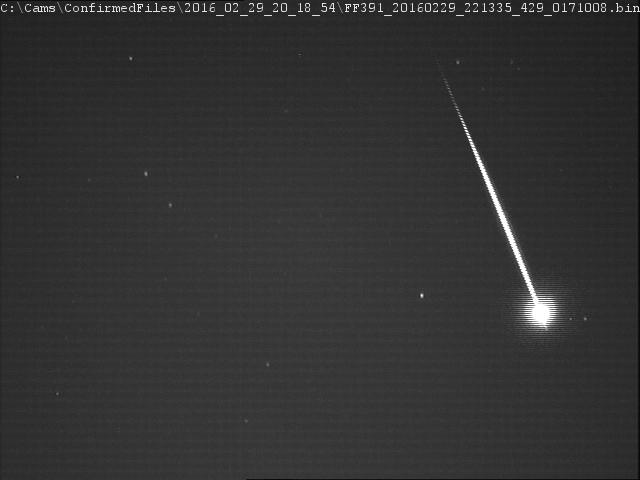