A family vacation turned into something more!

The Southern Delta Aquarids (SDA) is almost impossible to observe in the long summer nights at 60 degrees northern latitude. I therefore hoped to get at least 2 nights of observation of this swarm, during a long-planned family vacation to Morocco from July 13 to July 27. We would stay in a town called Martil situated on the north coast of Morocco, but light pollution here is too high to perform any kind of meteor observations. Due to this, I had also booked 2 nights from July 22 to July 24 for the whole family at a place called Caiat Lounge Refugee, situated at a dark site in the Rif mountains. As the time of departure from Norway approached, I was more and more troubled with the thought of leaving Morocco just before the highest activity of the SDA kicked in. I got permission from my always understanding and caring wife, called the airline, and changed the dates for my tickets back to Norway. This way I would get 5 more days of observation when the highest activity was expected!

On July 22, the whole family arrived at Caiat, and I was excited to check out the observing conditions. After rigging down some sunshields on top of the roof, I was ready for observations! The limiting magnitude turned out to be quite good, usually between 6.2 and 6.3. Some streaking headlights from the cars on a road nearby, was a bit annoying, but did not seriously affect the observations. Meteor activity was a bit on the disappointing side, with SDA and  Capricornid (CAP) rates not exceeding 2 meteors an hour. The sporadic rate was around 4 in the evening, reaching 9 in the morning hours. Perseid (PER) activity also picked up good during the night, reaching 5 in the morning hours. The highlight of the night was a -2 magnitude, intense blue, slow moving Capricornid meteor. I would have loved to have this meteor in my photographic treasure chest, but it moved in the opposite direction from where I had my camera field. Totally I photographed 5 meteors this night, with my Nikon D3100 DSLR camera, with a Samyang 16mm F2.0 lens. A total of 49 meteors were observed visually in 4,25 hours.

The next night I was observing from the roof again, and got much of the same results. SDA and CAP rates not exceeding 2 meteors an hour. Sporadic rates were around 5 in the beginning of the watch, but climbing to 13 in the morning hours. Perseid activity was around 4 when the radiant was at its highest in the morning sky. A total of 64 meteors were observed visually in 5,37 hours. I had more luck with my photographic observations this night, with 10 photographed meteors. When daylight came, I had to return to Martil for my family’s departure, but was already looking forward to return to Caiat on July 27 for more observations!

On July 27, I decided to look for a new observing site, to get a little better horizon to the south, and escape from the occasionally annoying car lights. I found a good place a 20 minutes’ walk up on a hillside nearby. And best of all, the meteor activity had picked up considerably! The SDA and the CAP started out with rates around 4 in the late evening sky, with SDA rates climbing to around 11 when the radiant was at its highest. Sporadic rates were surprisingly high this night, climbing from around 14 in the evening sky, to 24 in the morning sky! It seemed to be several centers of sporadic activity. Activity from the Gamma Draconids (GDR) was detectable, but did not exceed 2 meteors an hour. This activity is included in the sporadic count. It also seemed to be a center of sporadic activity in Cassiopeia, with many fast meteors coming from that region. Many slow moving, bright meteors were coming from the Aquila/Sagitta region, too high in the sky to be Capricornids, but with similar characteristics. I did not plot any of the meteors, but I guess video observations will reveal any activity from these possible radiants. The highlight of the night came during a break between 2 observing sessions, when a beautiful -3 magnitude Capricornid meteor, slowly moved over a large portion of the sky with an intense bluish color! A total of 173 meteors were observed visually this night, in 5,75 hours.

On the next night, the sporadic activity was fairly constant between 12 and 17 meteors the whole night. The SDA’s started out with 5 meteors between 23:00 and 00:00 UT, with the radiant still low in the sky. From midnight and onwards, rates were steady between 9 and 12, reaching 8 meteors (HR 16), the last half hour of observation between 03:15 and 03:45 UT. The Capricornids showed rates between 2 and 4, with occasionally bright shower members. 12 meteors were caught on camera, and 158 meteors were observed visually in 5,58 hours, making this night successful when it comes to both visual and photographic observations.

I had great hopes for the next night, which I considered could be the best night regarding activity from the SDA radiant. The first 2 hours of observation between 23:00 and 01:00 UT, SDA rates were around 8 to 9 meteors an hour. The sporadics made a good show of bright meteors, with a 0 mag, -2 mag and a -4 mag in the first half hour of observation. Hourly rates were between 10 and 14 for the sporadics the first 2 hours of observation. 7 Capricornid meteor were also seen in this period. From midnight, the SDA rates climbed to 15, reaching 17 at its best when the radiant culminated around 03:00 UT. This was in line with the sporadic activity for the rest of the night. A total of 141 meteors were seen in 4.5 hours of observation, and 18 meteors were caught on camera, making this another successful night of my Moroccan SDA campaign!

The next night, I went out early to take some photographs on a still moonlit sky. Camera was ready 22:30 UT, and only 3 minutes later I was rewarded with an awesome, slow mowing -3 mag Capricornid fireball, with 2 great flares right in the middle of my camera field! This meteor alone was worth all the hours with endless exposures showing nothing but satellites, or the hardly visible streak of a 2-mag meteor. Finally, I got the big one! From 23:30 to 01:00 SDA rates were around 10, similar or just below the sporadic rates. Activity was stable at around 10 to 02:35, when a sudden increase in SDA activity occurred! In the next half hour between 02:35 and 03:05, 14 SDA meteors were seen! The brightness also increased, with 3 meteors of 0 magnitude, and 1 of -2 magnitude. After this sudden burst of activity, rates declined to 9 meteors an hour for the next and final hour of observation this night. A total of 134 meteors were seen this night in 4.42 hours of observation. 11 meteors were photographed. 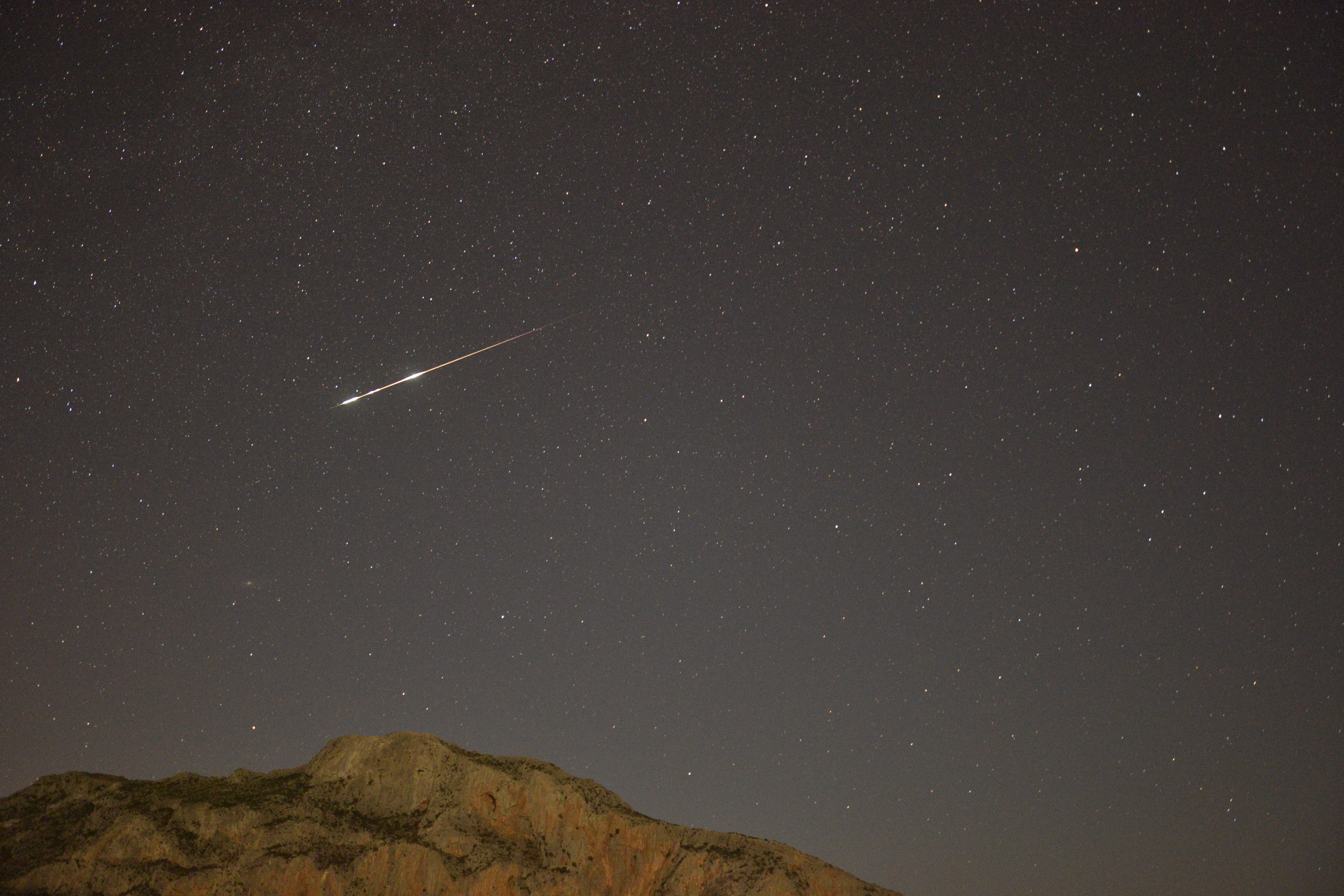 Before the final night of my stay at Caiat, I woke up to a bad weather forecast. Clouds were coming in from the south, and I was starting to prepare myself for a good night sleep! Clouds started to build up in the early evening, and the forecast for the next day was a total cloud cover. A last weather check before going to bed, was however a big surprise. Clouds had started to disappear, and at 23:45 the sky was clear, and I was ready to observe! The first hour, SDA rates was again 9 meteors and hour, and the sporadic rate was 11. The next half hour, SDA rates had climbed to 9 meteors, making a HR of 18. I also got the impression that the mean magnitude was I bit higher than the nights before. Unfortunately, the weather forecast proved right, and I had to give up observations at 01:20 when clouds came in again. This night I observed 39 meteors, in 1.58 hours, and 7 meteors were photographed.

The 2017 SDA campaign turned out to be a success due to good weather and observing conditions most of the time. It was a great experience to observe meteors in the Moroccan mountains, with all its sounds ranging from the bray of the mules calling each other over long distances, to the barking of the stray dogs and the flapping of the bats hunting insects around my sunbed! Every night around 03:30 the mosques started their calls for the morning prayer, creating a very special atmosphere during the late morning observations. The Southern Delta Aquarids was definitely a shower worth observing, and I hope I can return to a favorably latitude to observe them again in the future.  Details of the observations can be found in the Visual Meteor Database on the IMO website.