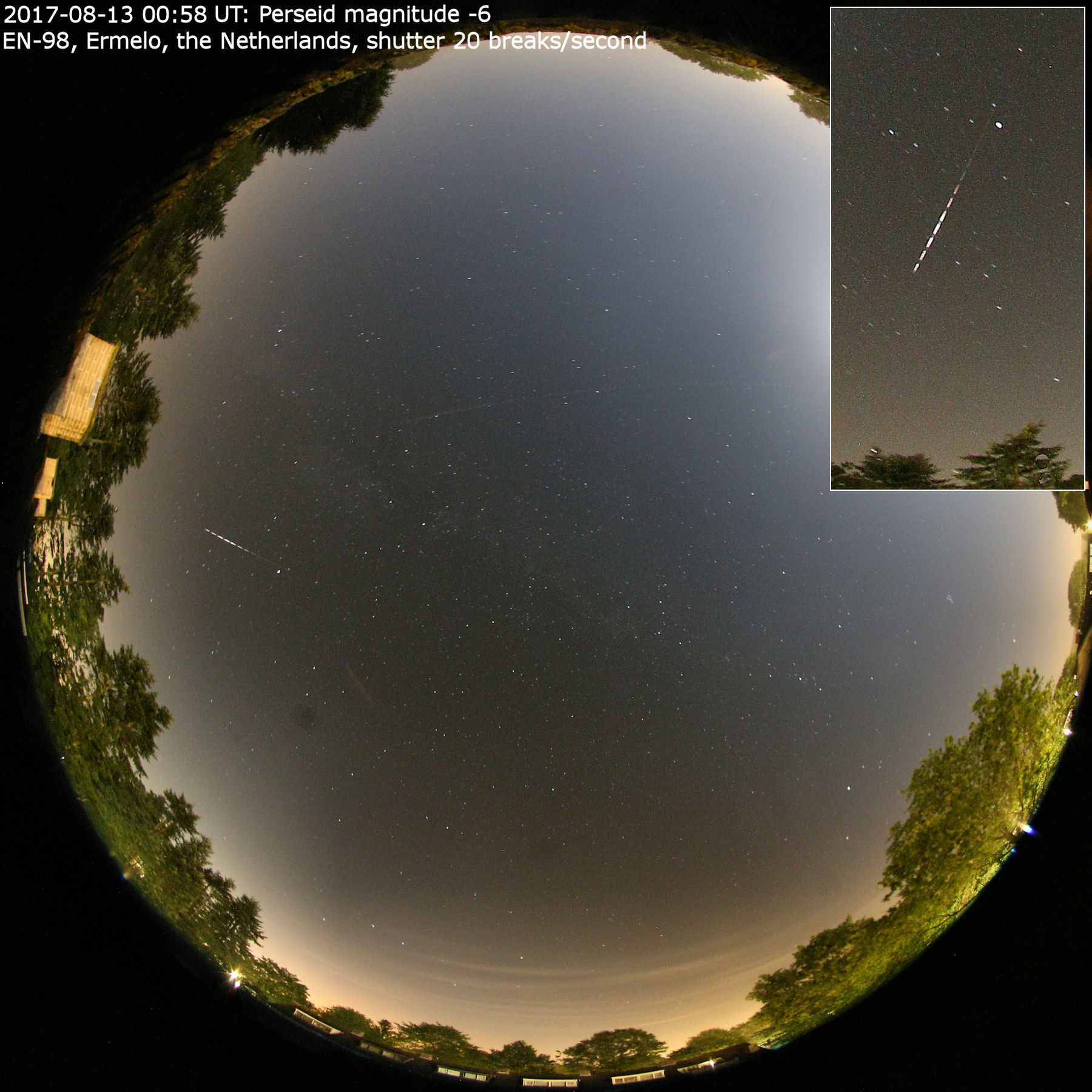 It is from 2012 that I had a (partly) clear Perseid maximum from Ermelo/The Netherlands. In t.eff. 3.23 hours I counted 119 PER, 2 SDA, 1 ANT, 2 KCG and 15 sporadic meteors. The all sky camera captured 3 Perseids of magnitudes -3, -4 and -6. The 4 CAMS systems captured 385 meteors during these three hours. I am satisfied with this result! Next year again from the Provence!

After the successful Southern Delta Aquariid campaign from southern Crete, I hoped that I could observe the Perseids for a few nights in the Netherlands. Unfortunately, the weather, like so often, wasn’t cooperative. Only the night of 5/6 August was partly clear. Between 23:27 and 02:30 UT I observed 35 meteors. The moon disturbed the observations all night, so the limiting magnitude did not exceed 5.5. Highest hourly count of the Perseids was 8. Overall, I saw 21 Perseids (PER), 2 Southern Delta Aquariids (SDA) and 12 sporadic meteors (SPO).

As mentioned, the rest of the week the Netherlands had bad weather. The night Friday to Saturday 11/12 august I was surprised by a clear sky when I came out of bed for work (at 01:30 UT). A clearing was moving from west to east over the Netherlands. I quickly started the all sky camera but after 30 minutes it was cloudy again with some rain.

Saturday during the day it was mostly cloudy, with some small clearings in the afternoon. Around 20:00 UT I looked on the internet at SAT 24, the rain radar and the weather outside. There are some clearings just before the Dutch coast. I compared the current weather situation with the prediction for 20:00 UT with the HIRLAM model. Hirlam’s prediction for 20:00 UT was in very good agreement with the current weather situation. According to HIRLAM, clouds would disappear around 23 UT in Ermelo, so the alarm clock was set just before that time. 22:55 UT: weather inspection outside. Hmm, mostly cloudy but clear at low altitude north-northwest. Indeed, the sky cleared around 23:15 UT and at 23:20 UT I can start with the visual observations.

The first meteor is immediately a beautiful one: a magnitude 0 Perseid in the Big Dipper. The limiting magnitude is despite the moon high with lm = +5.7 during the first hour (23:20-00:20 UT). The Moon was just behind the edge of my roof and chimney. That first hour I counted 40 Perseids. Some beautiful appearances next to the many Perseids of magnitude 0 and +1: 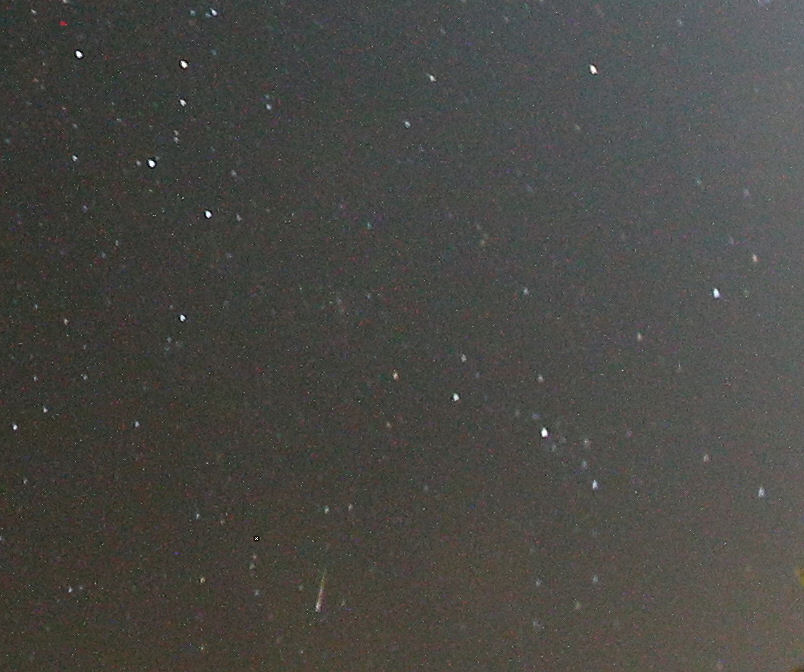 Figure 2. Perseid magnitude -3 near the radiant.

Between 00:20 and 01:21 UT there is a very short threat to the clear sky. A weak southwest wind came up. Between 01:11 and 01:12 UT I had to take a short pause for just a minute. At a few tens of meters high, low-hanging almost transparant clouds moved quickly from southwest to northeast, causing the limiting magnitude dropped to +3. As fast as they came they disappeared.

Between 01:21 and 01:30 UT I had to stop again for the very low-hanging clouds that passed very quickly. I suspect it’s the haze and/or fog on the nearby Groevenbeek Heide (a heath) that is blown away by some wind.

After 01:30 UT the clouds disappeared quickly and the sky stayed clear until dusk. However, the air has become a little bit hazy, which makes the average limiting magnitude slightly lower: +5.3. In this third period between 01:30 and 02:33 UT (t.eff. 1.033 hours) I counted 37 Perseids, 1 SDA, 1 ANT and 6 SPO. A lot of bright stuff in the +1 class, only at 02:11 UT a beautiful magnitude -2 Perseid with a broken persistent train in Pegasus. After that a couple of Perseids of magnitude 0 and +1 appeared. 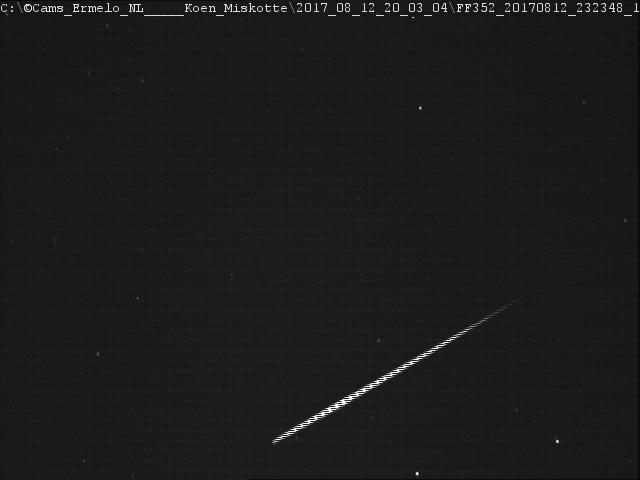 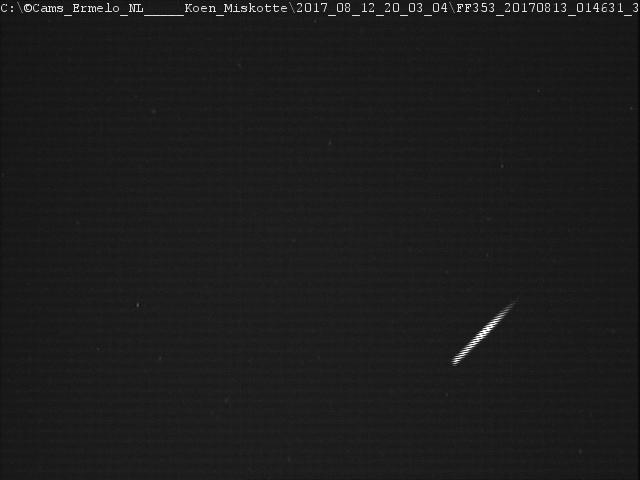 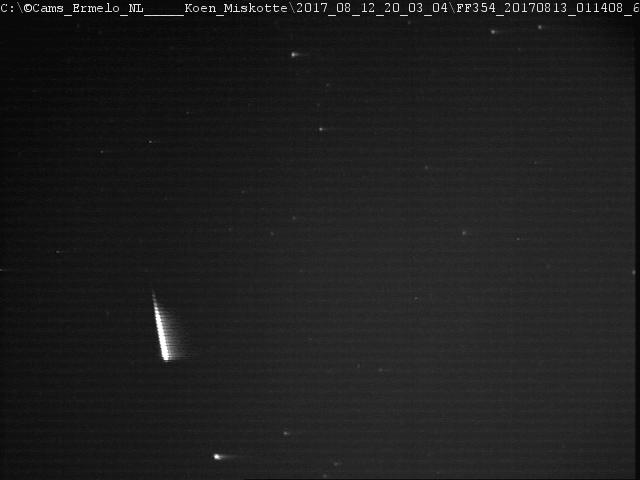 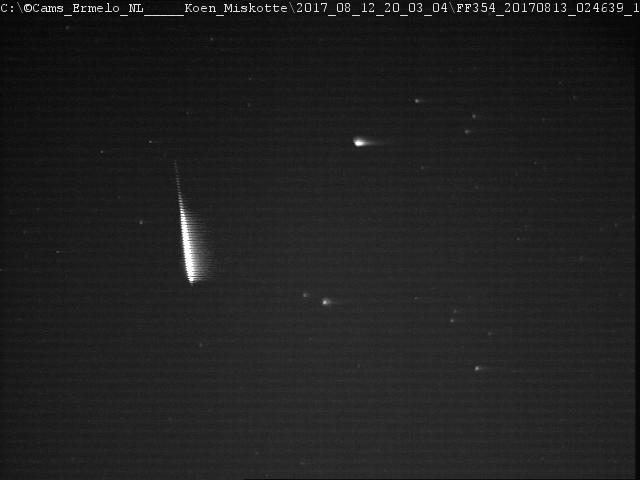