I was out for 4 hours this morning. The humidity was a little higher (44%) than during recent sessions therefore the sky was just a tad hazy. I decided to look a bit higher in the sky and more toward the east to get better skies. The move paid off as all 4 hours had an LM between +6.1 and +6.2. The exact timing I was out was 1:30-5:30 am PDT (8:30-12:30 UT). I started out looking about 20 degrees south of the Pleiades and just let the sky drift by. This would have been a great night to break out the telescope as the stars were barely twinkling. Despite the slightly hazy conditions Canopus outshone Rigel at an altitude of less than 5 degrees. The temperature was about 10 degrees cooler than my other Orionid sessions. It started at 62F (17C) and fell to 58F (14C) by the end. Now for the details:
.
I counted a total of 40 meteors during the watch, not that impressive

There were several large gaps in activity that didn’t help. The hourly counts were 10-7-13-10. A majority of the meteors were 3rd magnitude with nearly all of the remainder evenly split between 2nd and 4th magnitude. The number of 5th magnitude meteors equaled the number of +1 and brighter. The brightest meteor of the session was an orange dart that left a 1 second train. It lined up with the lambda Ursae Majoris radiant (LUM).
.
The Orionids were poor with rates of 3-2-1-2. There were no Orionids brighter than +2.
.
The Taurids were more active with the STA’s producing 1-1-3-1 and the NTA 1-0-0-1. Those rates are still poor considering the date. Nearly all of the Taurids were faint with the exception of a +1 STA. No chi Taurids (CTA) or omicron Eridanids (OER) were seen this morning.
.
I saw my first 2 nu Eridanids (NUE) this morning from a radiant just east of the Orionids. They would have been counted as Orionids except they shot southward and the radiant was definitely further east than was is expected for the Orionids.
.
The Leonis Minorids were poor this morning with only 1 shower member seen. No kappa Ursae Majorids (KUM) or Andromedids were seen. Once the moon passes full and we have a little darkness between dusk and moonrise, I plan to check the Andromedids out.
.
All the numeric details on this session can be found at: https://www.imo.net/members/imo_vmdb/view?session_id=75473
.
I’m working the next two nights so no viewing until Monday night/Tuesday morning for me. The weather forecast is not good early next week so we will have to see whether I can keep viewing or not. 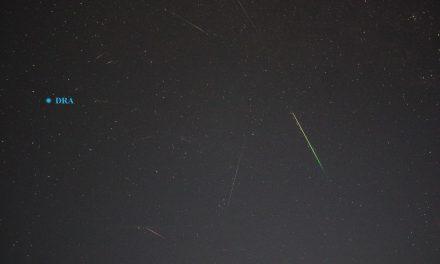