An analysis of the Geminids 2017 based on visual meteor observations is presented. A ZHR profile has been computed based on observations reported to the website of the International Meteor Organization and data from observers that were sent directly to the author.
This article provides an overview of the method, the difficulties and the final results of this analysis. The results from 2017 were also compared with old analyzes of the Geminids from 1985, 2001 and 2009.

The Geminids of 2017 have been looked forward to for years. After all, [1,2,3] the parent body of the Geminids, 3200 Phaethon, would have had its closest approach in 2017 and just around the Geminids maximum. According to Galina Ryabova and Juergen Rendtel [3] there was a very small chance of some increased activity on December 14 just after 12 UT (λ 262.45 ± 0.005). Furthermore, Galina and Juergen state in the same article that the Geminid activity has increased in the period 1985-2016.
In addition, it is true that [1,2] states that the Geminids series 1985-2001-2009 and 2017 are the best returns to see if the Geminids activity increases, remains stable or decreases.

Unfortunately, the Geminid maximum in the BeNeLux was not a success. The weather was pretty bad and again it was proven that the best opportunities for clear skies were in the southern part of the BeNeLux. Of course we also looked at data from well-known observers provided via the IMO site. However, it could also be seen that the weather in 2017 had a negative impact on the observational results. 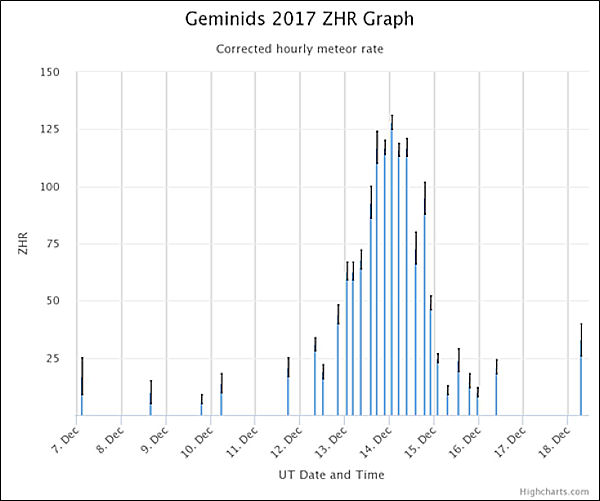 Figure 1. On the fly ZHR curve of the Geminids 2017. The curve is based on 8568 Geminids and an assumed population index r 2.6.
Furthermore, only data with a limiting magnitude of +5.0 or higher was used. 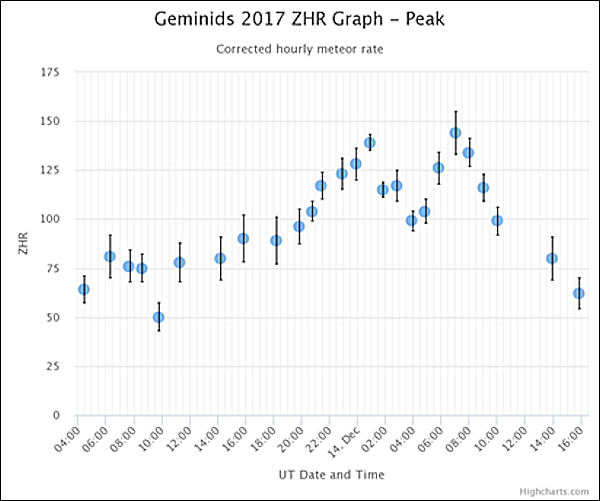 Figure 2. This ZHR curve is zoomed in on the maximum of the Geminids between 13 December 2017 4:00 UT and 14 December 2017 14:00 UT.
The curve is based on 6065 Geminids and an assumed population index r of 2.4.
Furthermore, only data with a limiting magnitude of +5.5 or higher was used. This immediately yields a better result compared to figure 1.

2 Assessment of the data

Because the weather in the BeNeLux was disappointing and because we wanted to look at the results on a global scale, we looked at the data that was reported to IMO. In addition, some observers sent their data directly to the author. Because few data were available from the observers with a reliable Cp determination, an attempt was first made to make an analysis with data from all observers with a limiting magnitude of +5.9 or higher and with an overall percentage of obstruction of no more than 10%. Also radiant heights below 25 degrees were not used. This data was then stored in the well-known ZHR spreadsheet (the interval counts) and the magnitude distribution check sheet (for the population index r determination). During the collection of the data it turned out that a large part of the observations were rather fragmented. Many observers had to deal with varying circumstances or could only observe a short period. When everything was in the spreadsheets, 6588 Geminids were used for the analysis. This is roughly 70% of all data reported to IMO.

3 Determination of the population index r

Determining a profile for the population index r turned out to be an impossible task. Only data from experienced observers is used here. The control of the magnitude distributions indicated that only 20% (!) of the submitted data of 3189 Geminids was suitable for the calculation of r-values. The rule in this spreadsheet is that the difference between the average magnitude of the Geminids and the limiting magnitude may not be greater than 4 magnitudes. This number (~ 700) of meteors is far too little for a reliable determination of the r value profile. In spite of that we tried to get a good picture of the Geminids 2017. Therefore we decided to maintain an r value of 2.5 to λ 262.2 for the ZHR calculations and to maintain a value of 2.3 after that point. This makes it possible to compare directly with the ZHR curves from the series 1985, 2001 and 2009, since in the large Geminids analysis [1] calculations were also made with those r values up to / from the same solar longitude.

In first instance, all data from all observers who submitted observations that met the requirements set out in point 2 were used for ZHR calculations. Observers with a known Cp were selected, while for observers with no known Cp, a Cp of 1.0 was maintained. As stated in 3, a population index r value of 2.5 was assumed for observations done before λ 262.2, followed after λ 262.2  by a population index r of 2.3. This resulted in figure 3. 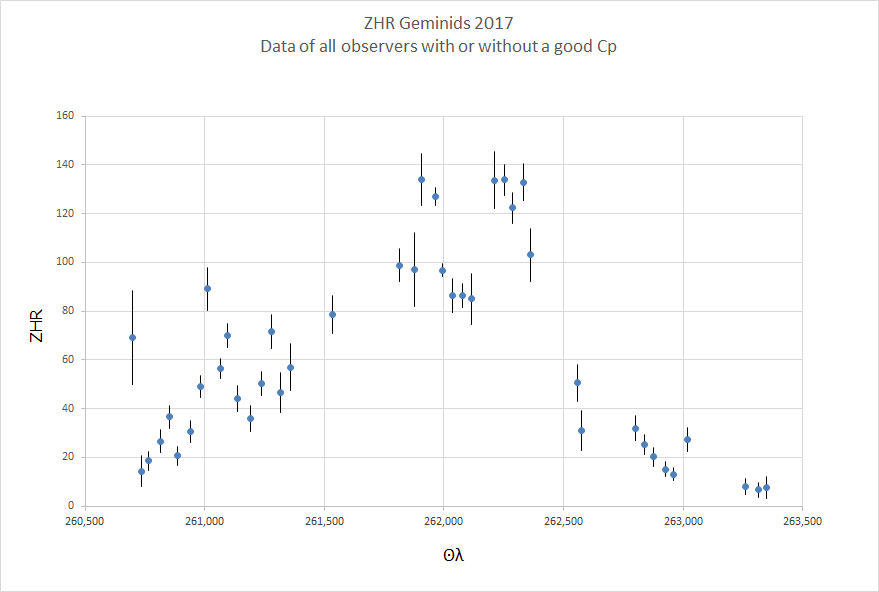 Because of the mentioned outliers, the rather messy build up in the night 12/13 December and the rather high ZHR values ​​that night the author zoomed in on the data gathered between λ 260.7 and 261.5. Usually there is a fairly regular build-up of activity around that solar longitude, with the ZHR slowly increasing. Further inspection of the observations shows that there seems to be a problem with the data of one observer, for who a good cp determination is available (surprisingly enough). This observer has very high individual ZHR values ​​for the night 12/13 December, just over 100! His Cp was once determined at 0.7 (found from the period 2014-2015). To be sure, I have recalculated his Cp and added it with data from August 2017. Indeed the cp is now a bit higher with 0.9. But even then I still found high ZHR values ​​between 70-90. The observer observed ZHR values ​​that are twice as high compared to those of other observers with a good Cp, observing at the same time.

That is why I decided to do another complete ZHR analysis in which data was used according to the following method:

Of the 6565 Geminids mentioned, 3995 then remained. From these data a new ZHR curve was made, the result is displayed in figure 4. It is immediately apparent that the structure of 12/13 December looks a lot more “stable”. The double peak remains, even though the first peak has been reduced by 1 ZHR point. Figure 5 is a combination of Figures 3 (ZHR curve of all observers) and 4 (ZHR curve based only on data of observers with a known CP) to better emphasize the differences. 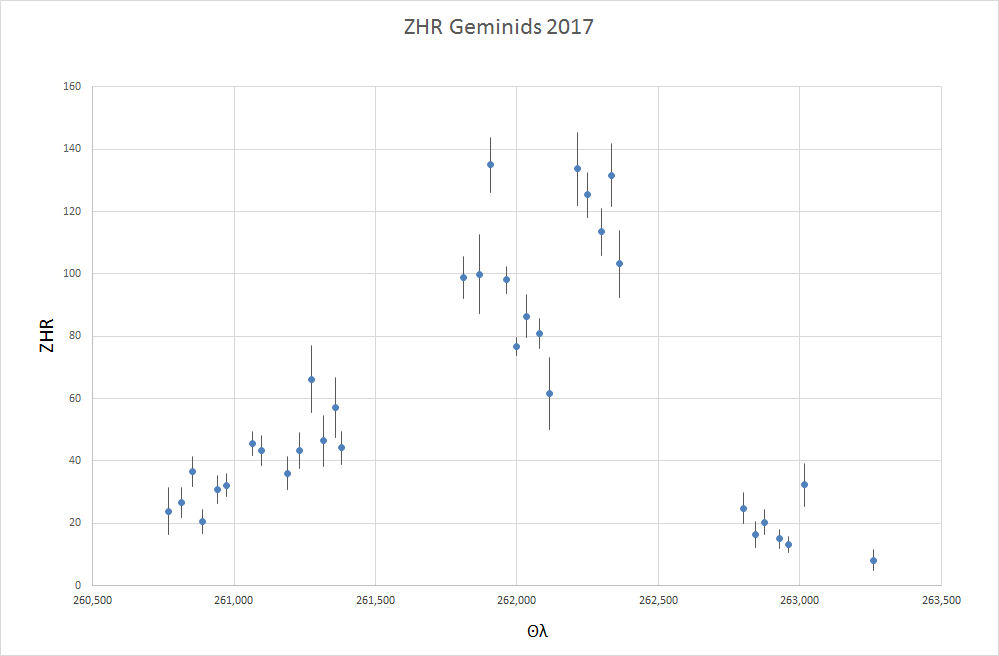 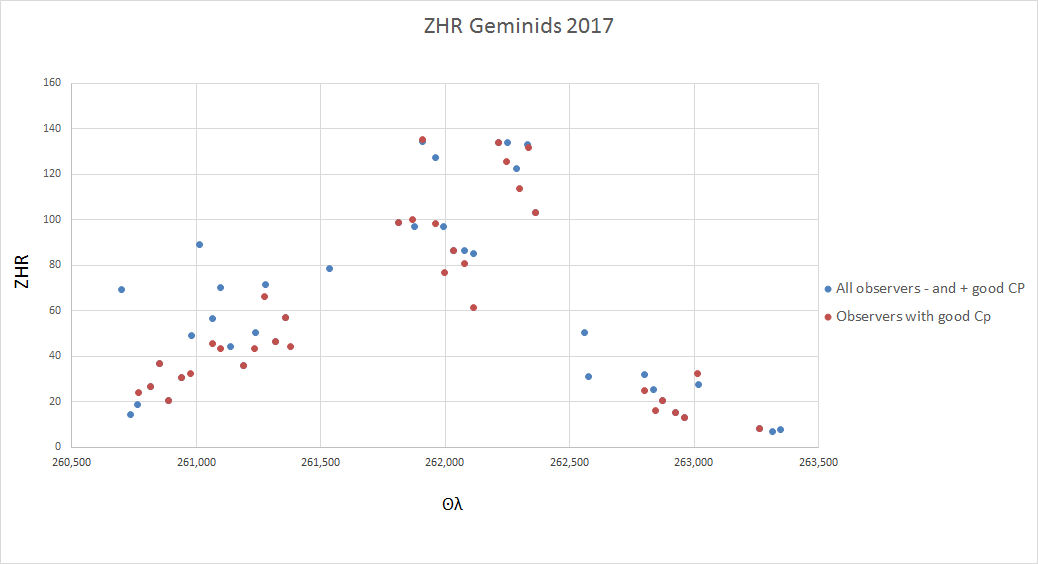 Figure 5. Comparison between ZHR profiles of figures 3 and 4.
The lower ZHRs of 12/13 December are very clearly visible; the differences in the night of 13/14 December are smaller.

Despite the fact that most observers had moderate weather conditions during the Geminids, a “reasonable” reliable ZHR curve emerged from the calculations. It remains a pity that there was not a lot of relatively good data this year to make this analysis more robust. Nevertheless, an attempt has been made to compare the ZHR curve from 2017 with older ZHR curves. This analysis is good for comparison with the years 1985, 1993, 2001 and 2009. 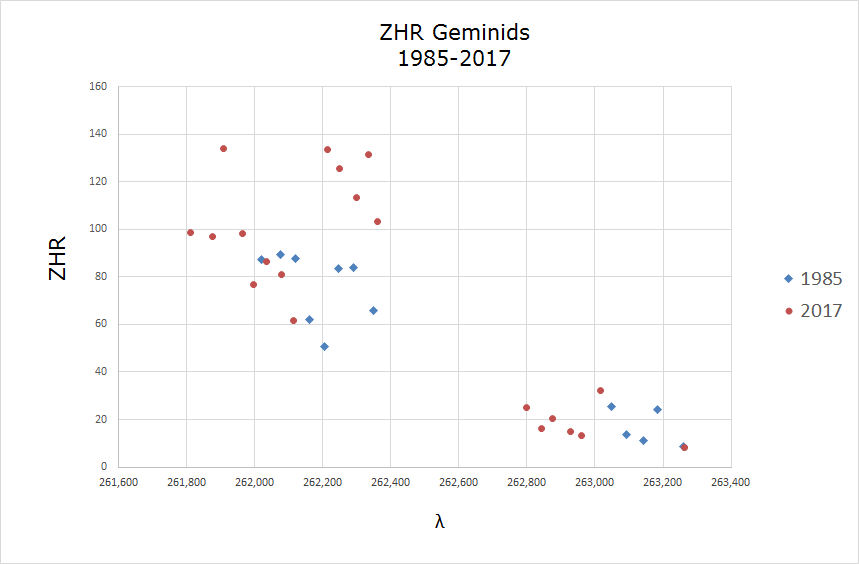 Figure 6. Comparison between the ZHR curves from 1985 and 2017. It is striking here that the ZHR in 1985 is much lower. In 1985 the author in [1,2] and Peter Jenniskens in [5] found a double peak. The ZHR curve is based on data from two good observers at one location (Puimichel, southern France), so we must also exercise caution. It would be better when more good data was available from 1985. It is also questionable to what extent the passage of a cirrus field [6] influences the “dip” between the two peaks. Furthermore, the curve seems to have shifted in solar longitude in 2017 by about 0.2 degree, earlier than in 1985. In figure 7 we have the same equation as in figure 6, but the ZHR profile for 1985 is moved forward by 0.2 degrees (= 5 hours). 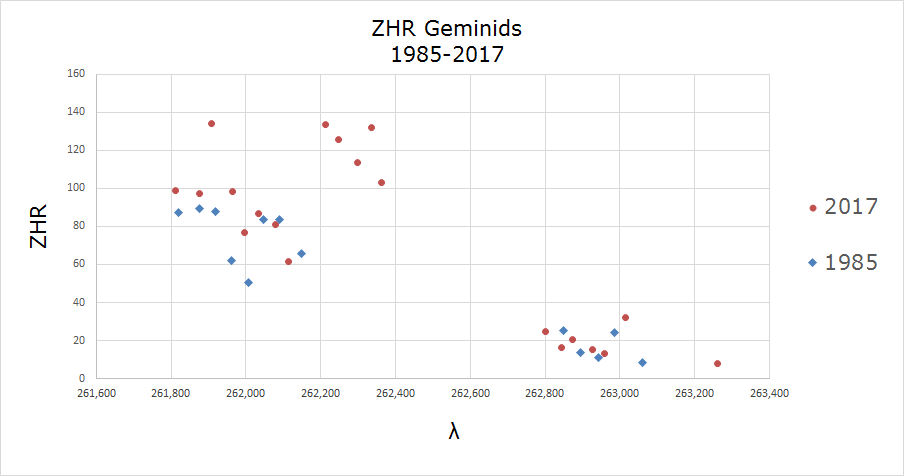 Figure 7. The same figure as figure 6, but now the ZHR profile of 1985 has been moved forward by 0.2 degrees. Really good conclusions cannot be drawn here.
The profile of 1985 is based on data from 2 observers at Puimchel (Klaas Jobse and Paul Roggemans).
No observational data is available from λ 262.2 or later on the IMO site for comparison with the peak in 2017.

Because a peak in activity above America was noticed in 2017, the author decided to look at the IMO site for observational data from known observers in the period of 14 December 2001 after 05 UT. Indeed, about seven North American observers had sent data. However, I was only able to add a limited dataset from two observers with a good Cp determination. These were Robert Lunsford (3 hours effective) and Pierre Martin (2 hours effective). Their data mutually connects nicely and is included in the figures 8 and 9 below. 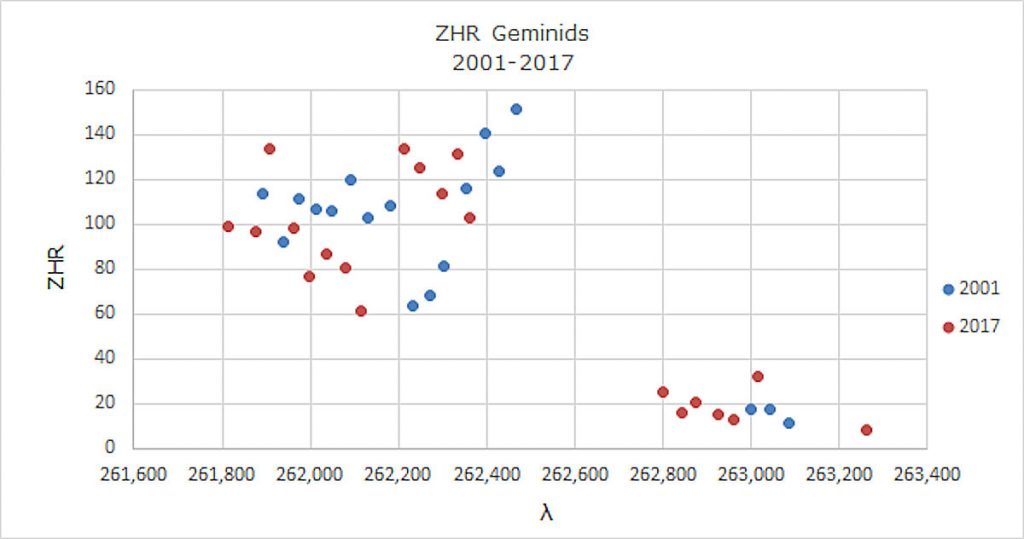 Figure 8. Comparison between the ZHR curves from 2001 and 2017. Again, the ZHR curves seem to have shifted relative to each other. M
ost of the time the ZHR from 2001 is slightly higher than 2017. Data from 2001 by Robert Lunsford and Pierre Martin has been added for comparison.
If we reset the ZHR curve from 2001 to 0.2 degrees in solar longitude, a different image is created. See figure 9 for that result. 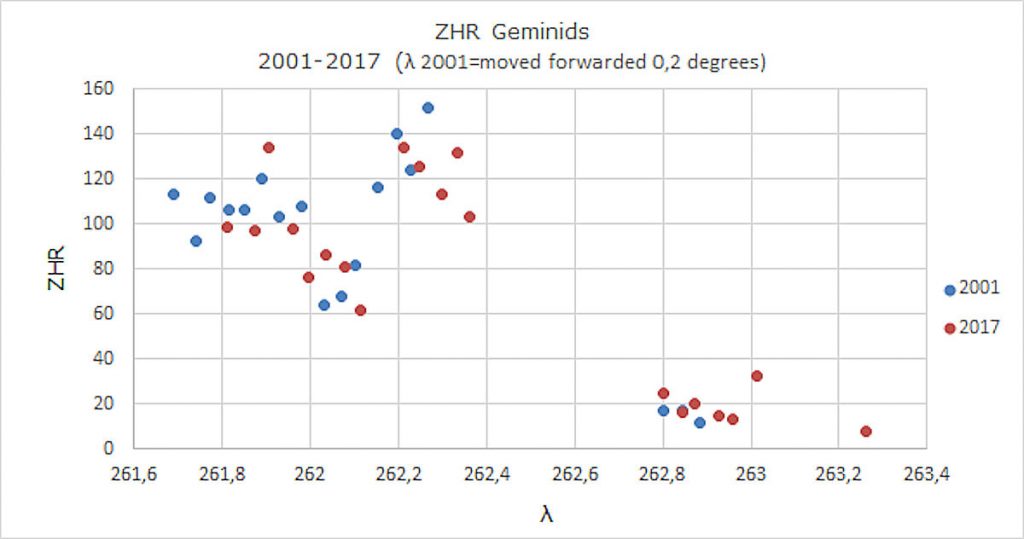 Figure 9. The same graph as figure 8, only the solar longitude of 2001 is moved forward by 0.2 degrees.
The result is remarkable; there is suddenly a reasonable agreement with each other! The second peak in 2017 was also seen in 2001 from the US.
Based on the data, we may conclude that the 2017 curve shows a slightly lower level than 2001.

Here too it was checked whether North American data could be added to the 2009 ZHR curve. It is there but it is all very brief. Only Wesley Stone has a nice set of data available, but unfortunately he had varying weather conditions, which often means that too high sky coverage percentages were reported. So his data of that night were not used. 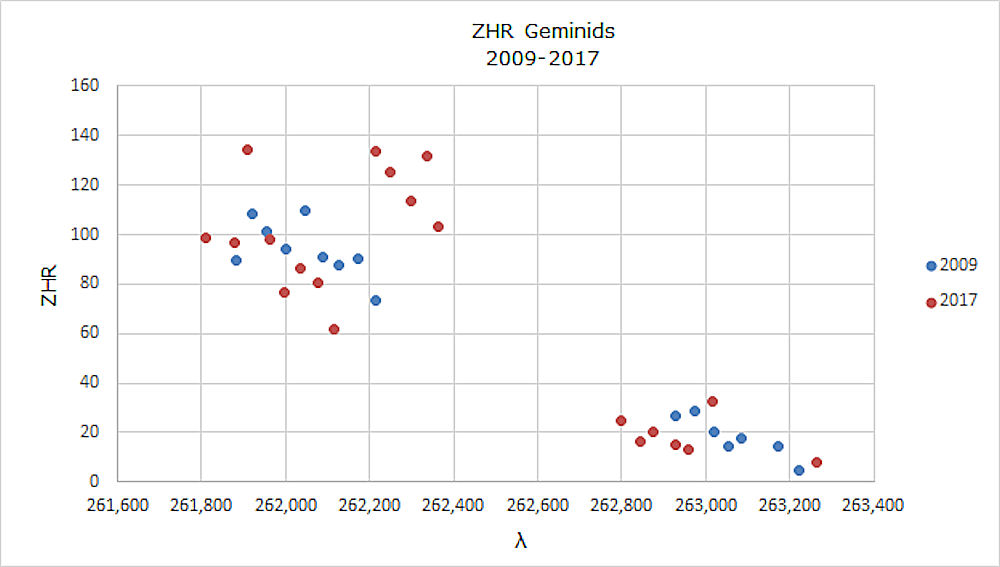 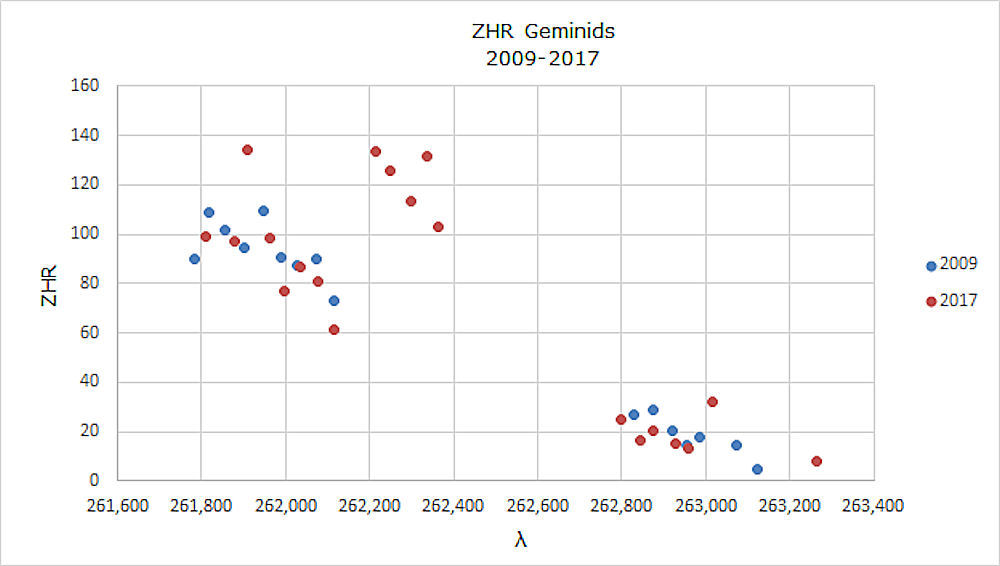 6  Some very cautious conclusions and recommendations!

The author thanks all observers who have observed the Geminids of 2017. This is not easy in cold winter conditions and therefore a lot of thanks for the commitment! In addition, the author thanks Michel Vandeputte, Paul Roggemans and Carl Johannink for their valuable contributions and suggestions. Also thanks to Paul Roggemans for checking my English.

A number of Dutch observers plan an observing expedition on the Pic du Midi in 2018. Others plan a hit & run action to clear weather such as in 2007 and 2009. In 2019, an almost Full Moon will be disturbing. In 2020 there are plans for an observing expedition in Oman. If anyone wants to be kept informed about these plans or if someone wants to take part in a hit & run action, please contact the author of this article.