An summary of the major shower events and an overview of the peculiar meteor events recorded by the French network BOAM during the period of January until May 2017 is presented.

The first half of the year is known to be rather weak for meteor activity but we were able to enjoy the first major shower of the year, the Quadrantids and the well known Lyrids, it’s also a period where we could observe bright fireballs.

Figure 1 – Overview of the number of captures for the period January to May 2017 – GraphBoam.

Quadrantids activity is very low over the period except few hours before and after the peak which occurred January 3rd to 4th.  The Zenithal Hourly Rate (ZHR) increases up to 120 meteors per hour and the shower becomes the first of the three major showers of the year.

Figure 2 – Characteristics of the Quadrantids.

Their origin is complex. Peter Jenniskens found evidence that Quadrantid meteoroids are associated with the asteroid 2003 EH1, discovered on March 6th 2003 by B. A. Skiff (Lowell Observatory-LONEOS). The radiant of this extinct comet which became an asteroid matches with the Quadrantid meteoroid stream. Quadrantids are also related to comet 96P / Machholz.

In 2017, the maximum activity of the Quadrantids was forcasted on January 03th around 14 UTC and was not favorable for European observers. The radiant was at a low elevation in the first part of the night rising at the sky until the morning, the best observing conditions for France were on January 3rd at the end of the night.

85 single detections are attributed to Quadrantids by UFOAnalyzer in the BOAM database, half of them were recorded by the stations in Normandie which had good weather during the peak. 30 orbits, radiant positions and trajectories could be calculated with the data from UKMON and FMA.

Figure 6 – 30 Quadrantid orbits : top view side view (Red=Mars, Gray=Jupiter) UFOorbit.
Rq : The semi-major axis of the calculated orbit depends a lot on the velocity of the meteor, the accuracy for the semi-major axis is rather low.

The Lyrid shower is the oldest meteor shower to be observed. First reports of hight meteor activity associated with the Lyrids was found in Zuo Zhang, China.

Figure 7 – Characteristics of the Lyrids.

The Lyrids with an average velocity of 49 km/s, are a meteor stream rich in rather bright meteors  but without leaving many persistent trails.

Last Year, observing conditions were favorable without moonlight (New Moon on April 26th), the radiant was quite high in the sky from 22h30m UT and rising all night long.

Figure 8 – Chronological distribution of the 150 single detections of Lyrids – GraphBoam.

Figure 11 – 60 Lyrid orbits in the solar system map : top view side view – UFOorbit.
Rq : The semi-major axis of the orbit calculated depends a lot on the velocity of the meteor, the accuracy is rather poor for this element. 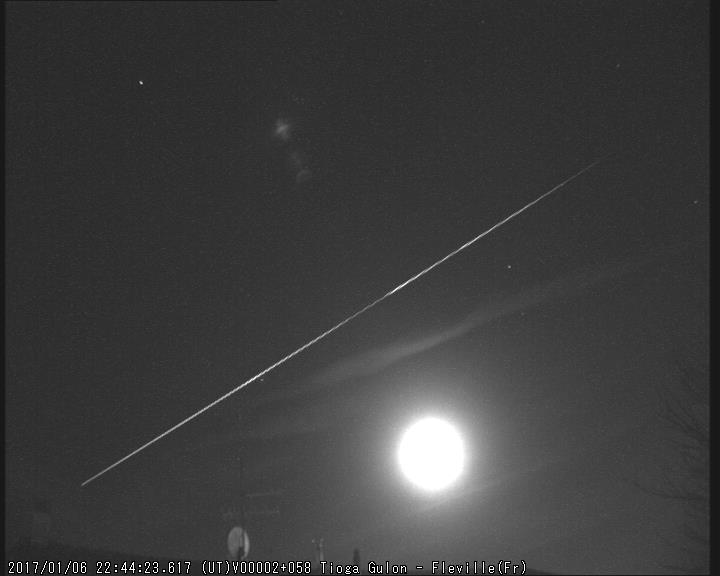 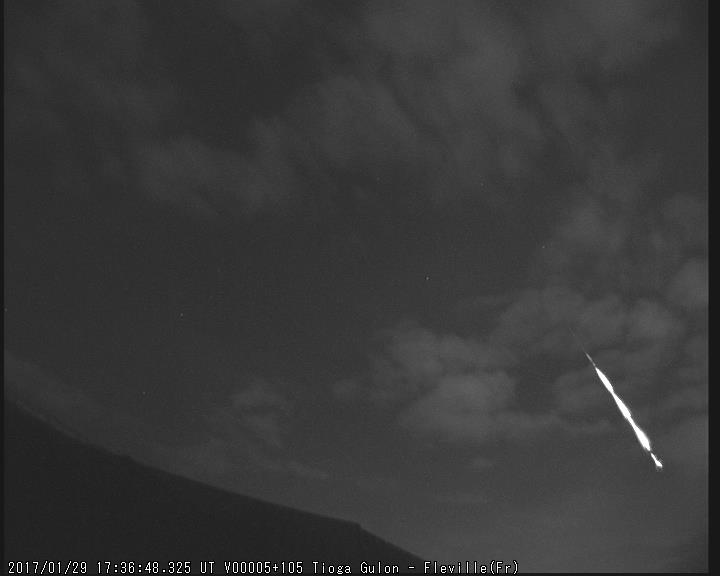 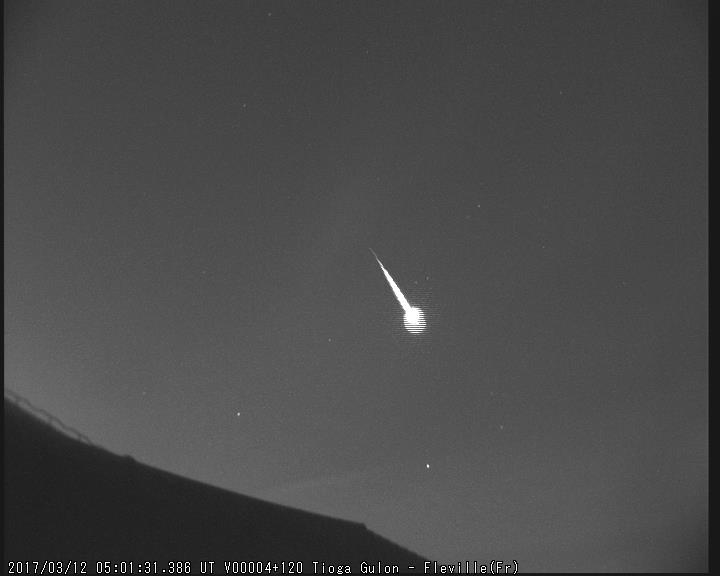 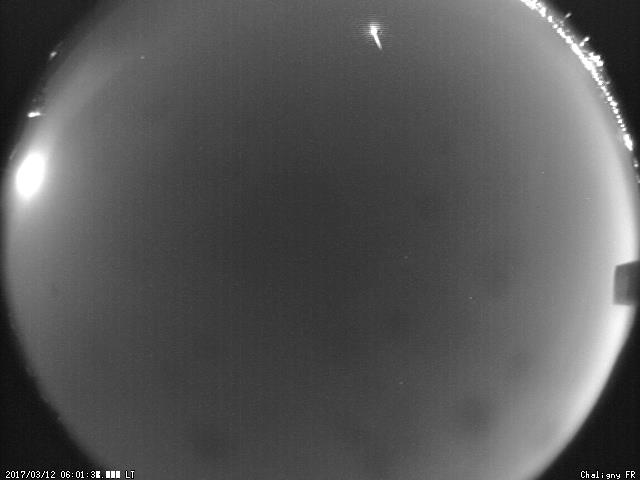 2017/03/25 00:03:35 UT : exploding fireball over The Channel
This short and bright fireball has been observed from both sides of the channel by French BOAM and British UKMON cameras and 11 visual observers from the UK, the Netherlands, France and Belgium.

You can find information on UKMON’s page for this event : https://ukmeteornetwork.co.uk/fireballs/large-meteor-over-the-channel-on-25-march-2017/

2017/03/14 23:42:51 UT : A -10 magnitude Fireball
The object crossed the sky through the zenith over AstroChinon observatory and was recorded by the camera at Chaligny, 470 km away. The duration time was 3.6 seconds and the maximum brightness was probably around -10 mag. 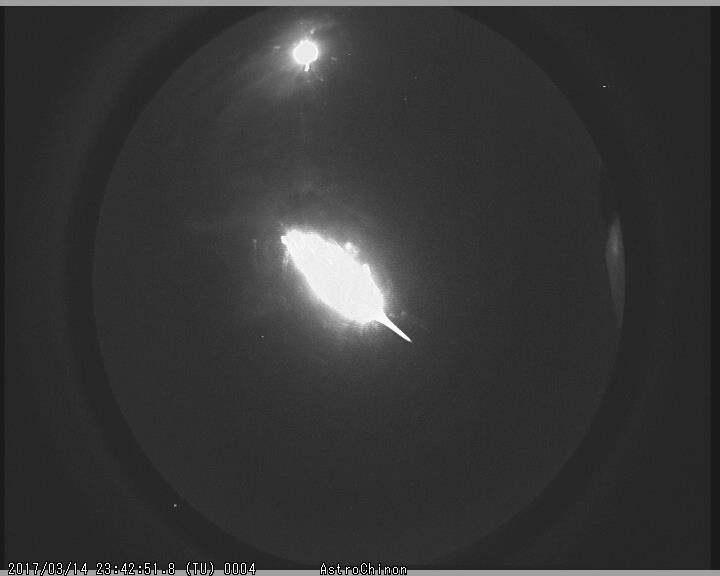 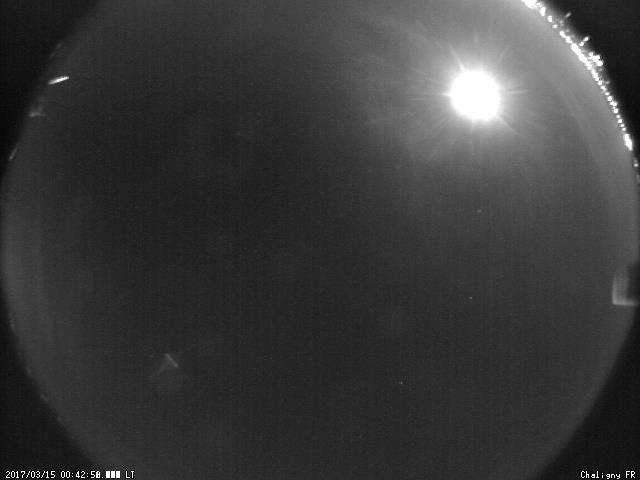 2017/03/27 20:32:23 UT : A deep and straight atmospheric entry
This fireball has gone relatively unnoticed by BOAM observers but it was reported by 16 visual testimonials and resulted in a meteorite prospection on the strewnfield by the FRIPON’s team.
No more information on their investigation except this summary http://www.vigie-ciel.org/la-recherche-de-meteorites-a-chambord/ “The meteorite remaining to be found. ”

The two captures made by BOAM cameras do not allow to calculate an accurate trajectory but just an estimation of velocities and coordinates. A very steep slope ~ 90 °, slow speed ~ 12 km/s and the end point of the fireball at an altitude below 30 km are a good clue for the survival of an object. 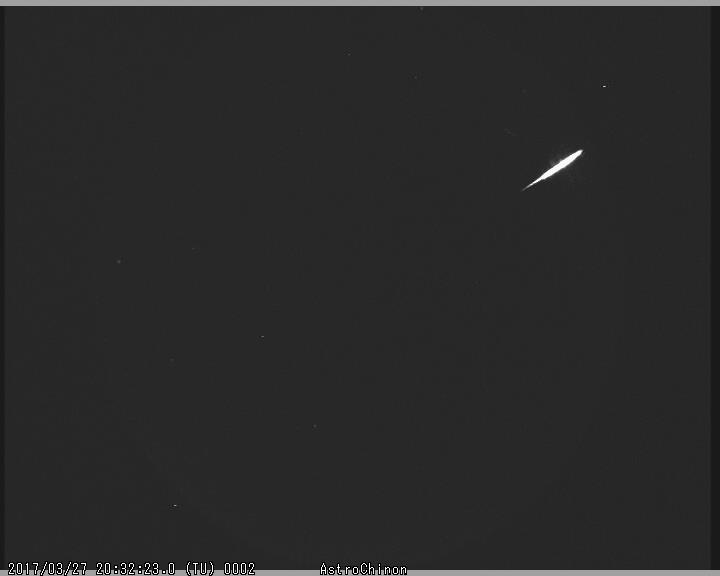 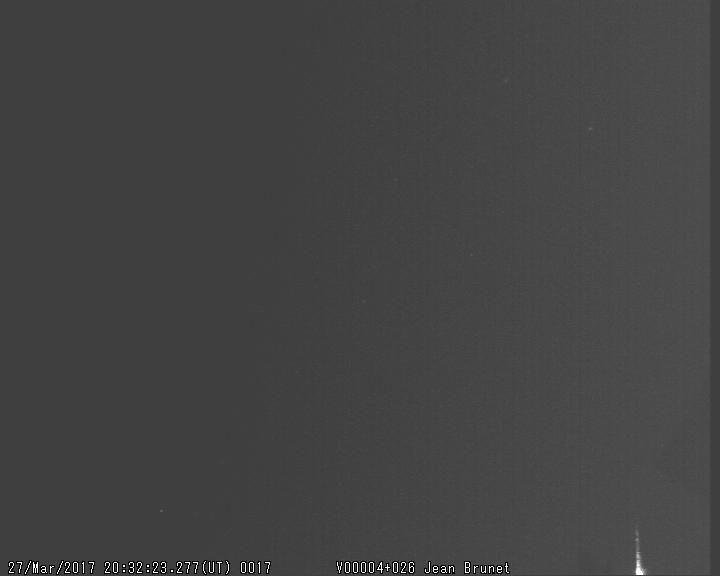 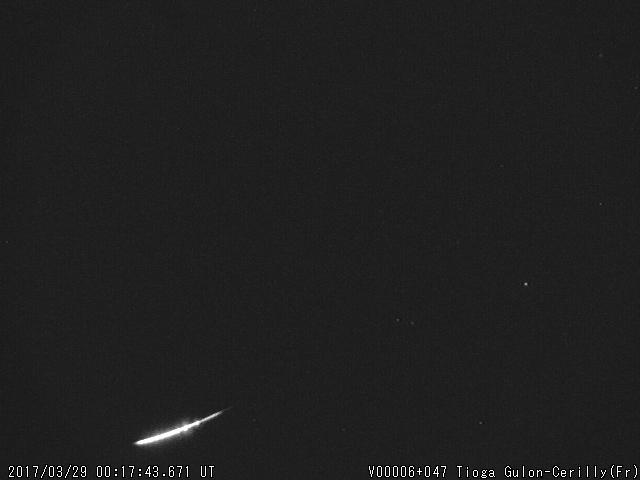 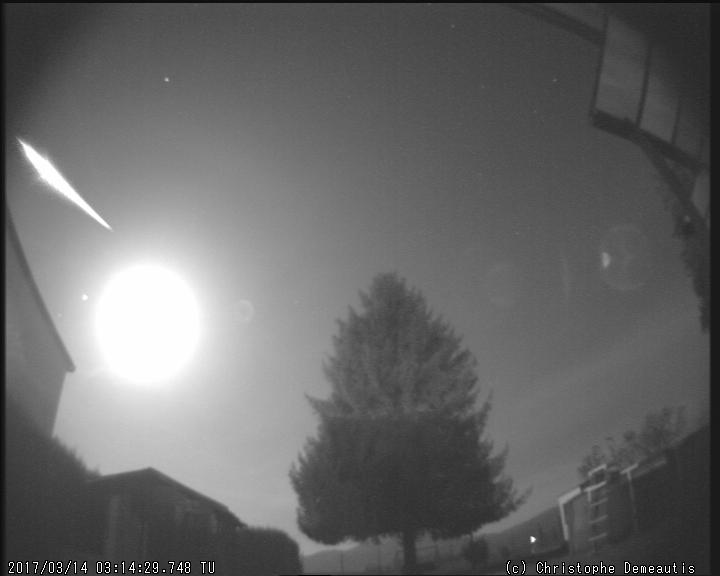 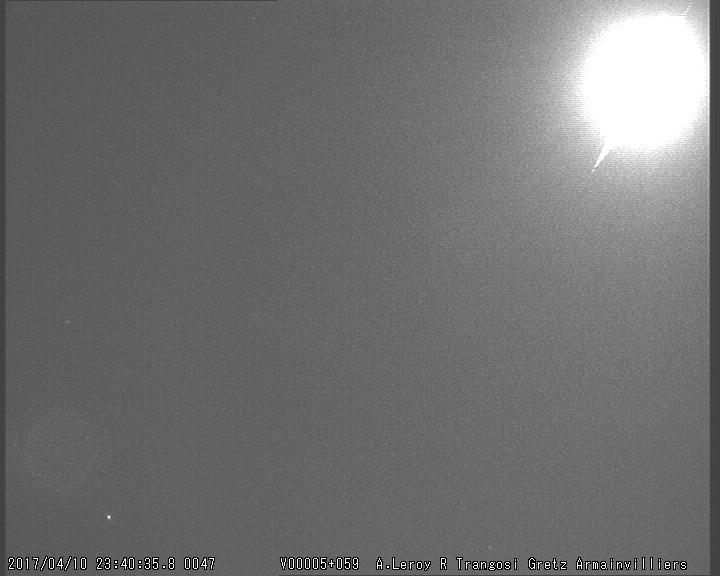 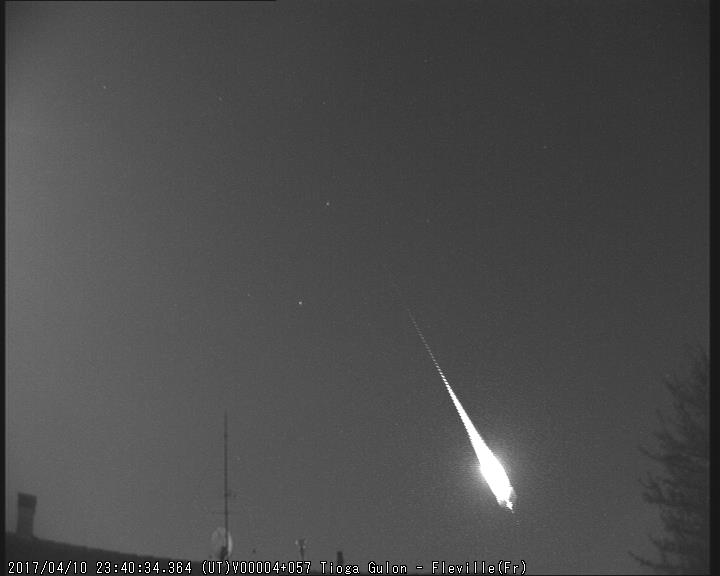 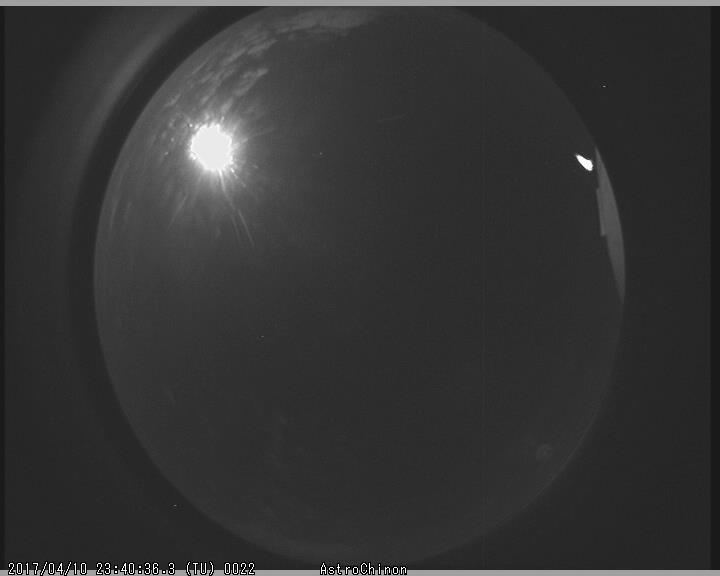 September observations of the CCY, SPE and STA from Norway.