Two years in a row the eta Lyrids (#145-ELY) caught the attention of the CAMS BeNeLux camera network with surprisingly large numbers of orbits collected for this stream. An independent search was made on the data of ~686000 public available video meteor orbits. The results confirm earlier studies with a clear activity profile between solar longitude 45° and 53° with a sharp peak at 49.5±0.2°. No mention of this shower could be found before the passage of the parent comet C/1983 H1 (IRAS-Araki-Alcock) in 1983. In recent years the shower tends to surprise observers with some low but distinct activity. Outbursts are not excluded in the future, observers are recommended to keep an eye on this shower.

Last year, the CAMS BeNeLux network had clear nights 9–10–11 May 2017.  On the nights 26 orbits were identified as η-Lyrids (#145 ELY) which was sufficient to warrant an analysis (Johannink and Miskotte, 2017). The question arose whether or not the shower displayed greater than usual activity in 2017, or that the strong ELY presence was just the result of favorable weather around 10 May? Also in May 2018, the weather was very favorable and the η-Lyrids (#145 ELY) caught again the attention of the observers. This shower requires attention.

A search for historic records from this shower proved negative, this stream was not identified in any old meteor shower list. Gary Kronk did not mention this shower in his book (Kronk, 1988) and nowhere anything indicates that the shower was noticed by anyone.

Jack Drummond (1983) mentioned possible meteor activity on May 10.0 (λʘ  = 49.1°) from a radiant at α = 289° and  δ = +44° (Marsden, 1983a) associated with comet C/1983 H1 (IRAS-Araki-Alcock). His own observations confirmed a definite minor meteor shower associated with the comet, with hourly rates of 2 to 5 meteors per hour on nights of May 9-10-11 (Marsden, 1983b). A call if anyone noticed meteor activity from comet IRAS-Araki-Alcock (1983d) in WGN (Roggemans, 1983) remained without response. This comet is actually the parent comet of the η-Lyrids. The IAU working list of meteor showers does not mention any parent body for the shower at this moment. The orbit of the parent comet is listed in Table 3.

Johannink and Miskotte (2017) recall that Peter Jenniskens drew attention in an article in Radiant in 1985 to possible meteors from C/1983 H1 (IRAS-Araki-Alcock), expected to occur around 9 May (Jenniskens, 1985). A search for visual observations of this shower in the archives of the Dutch Meteor Society resulted in visual data for this shower for 1982 and 1983. The shower caught attention again in 2000, 2001 and 2008 when favorable weather allowed more visual observations. The successful CAMS registrations in May 2017 and now again in May 2018 indicate that this shower may bring nice surprises to the observers. 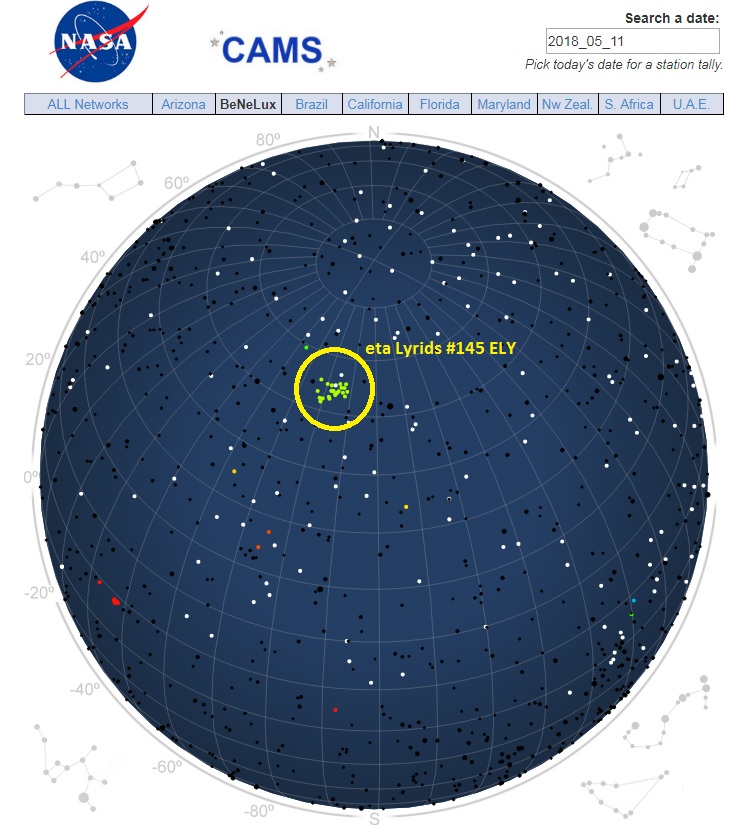 Figure 1 – Screenshot of the CAMS radiant plot for the night of 2018 May 11 with the remarkable concentration of radiants identified as #145 ELY orbits.

Having no solid evidence for the activity of the η-Lyrids before the passage of its parent comet, the question arises if we are observing dust particles from this very long (970 years) periodic comet that have spread behind the comet and which may sooner or later produce enhanced activity when Earth passes through some denser dust trails left by this comet?

At this point it is useful to take a look at the available orbital data collected in past 10 years.

With two major orbit datasets being recently updated, it was worthwhile to check if and what we can detect about the #145 ELY or η-Lyrids meteor shower. We have the following data, status as until May 2018, available for our search:

Altogether we can search among 686073 video meteor orbits.

All orbits within the following intervals were selected:

Table 1 – The median values for each sub-set of orbits, CAMS, SonotaCo and EDMOND, all combined orbits and the final parent orbit derived for DD < 0.04.

We apply three discrimination criteria to evaluate the similarity between the individual orbits and the final parent orbit from Table 1. The D-criteria used are these of Southworth and Hawkins (1963), Drummond (1981) and Jopek (1993). We consider four different threshold levels of similarity:

Table 2 – The median values for the selected orbits with four different threshold levels on the D-criteria, compared to the reference orbit from literature (Jenniskens et al., 2018). 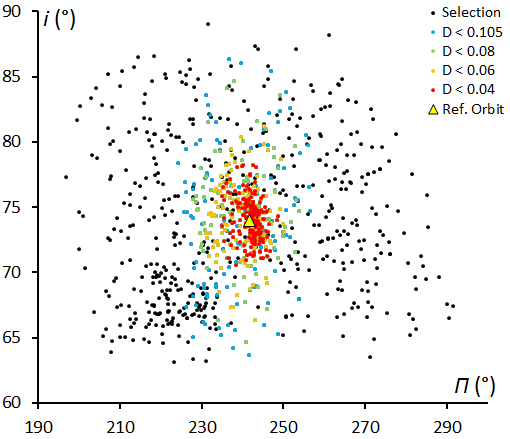 Figure 2 – The plot of inclination i (°) against the length of perihelion П (°) for the 1038 preselected possible ELY-orbits. The colors mark the different threshold levels of the D-criteria relative to the final parent orbit listed in Table 1.

In Table 2 we compare the median values of the orbits according to the four levels of the D-criteria threshold. The resulting orbits for each of the levels of similarity show very little variation. The results are in perfect agreement with the most recent values from literature (Jenniskens et al., 2018).

Table 2 shows the percentage (S) of orbits of the sample that fail to fulfill the D-criteria and must be considered as sporadic contamination of the radiant area. The presence of a cluster of very similar orbits in the dataset becomes very obvious in the graph of the inclination i (°) against the length of perihelion П (°) (Figure 2).

The final sample of 543 probable ELY-orbits represents 52% of the preselected orbits that fulfill the minimal threshold. With other words, one on two meteors that look like an ELY meteor for an observer has an orbit that is similar to the eta Lyrids shower while the other is a sporadic lookalike. It is no surprise that meteors from this minor shower catch the attention of visual meteor observers around the shower maximum.

The activity period and profile

There is no indication for any annual variation in ELY activity. The variation in number of orbits collected year by year reflects the total amount of orbits contributed by all the camera networks (see Figure 3). On average 2.3% of the total available orbits in the interval 38° < λʘ < 62° have an orbit similar to the eta Lyrids meteor shower. The variations from year to year can be explained as statistical fluctuations. 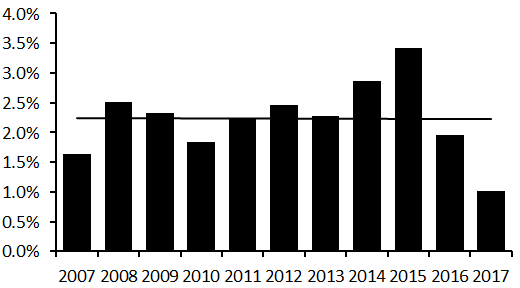 Figure 3 – The percentage of ELY orbits per year (DD < 0.105) relative to the total number of orbits obtained.

The first #145 ELY orbit was registered at λʘ = 38.3°, the last at λʘ = 61.6° with the lowest threshold D-Criteria. The main activity takes place in the time interval 45° < λʘ < 53°, or 6 May until 14 May, with the peak ELY activity on 10 May at λʘ = 49.5±0.2° (Figure 4) This is in good agreement with single station video camera work by Molau & Rendtel (2009) who obtained an activity interval of 45° to 52° with a peak at 50°, confirmed later in 2013 by the same camera network of IMO (Molau et al., 2013). Since it is difficult to obtain hourly rates for this kind of minor showers, the number of orbits collected for each degree in solar longitude provides an indication of the activity profile, showing the activity period as well as the solar longitude at which the largest number of orbits has been collected. The small number of similar orbits detected before λʘ = 46° and after λʘ = 54°, may be real eta Lyrids that got dispersed from the main dust trail but may be also unrelated sporadics that fulfill the low threshold D-criteria by pure chance. 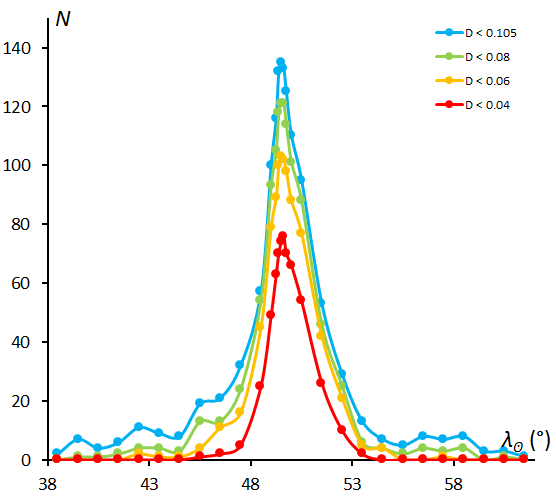 The radiant position, drift and diameter

This compares well to the values found in Jenniskens et al. (2016).

In order to get an idea of the size of the radiant we apply the radiant drift correction to get a plot of the radiant positions corrected for the daily motion (Figure 8). This shows a compact radiant slightly elongated in declination. Compared to the original, uncorrected radiant positions (Figure 7) the scatter of the radiants that failed to fulfill the D criteria increases considerably. Some radiants for orbits with a weak similarity get more diffused and may indicate that these orbits are sporadics that fit within the low threshold by pure chance. The higher the threshold level the more concentrated the radiant drift corrected positions become. Another way to consider the radiant size is to plot the ecliptic coordinates as the ecliptic latitude β against the Sun centered longitude λ – λʘ. Also here the radiant size appears to be rather compact. 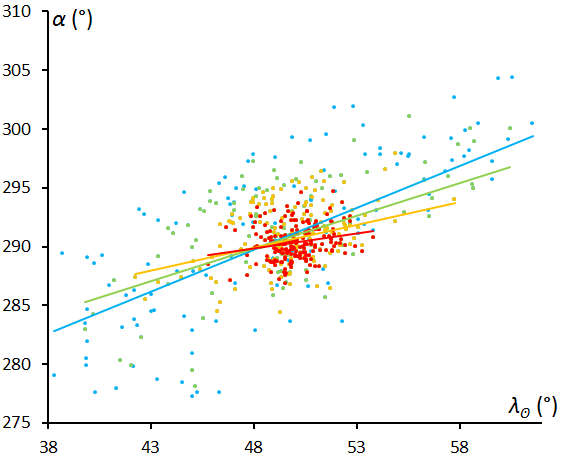 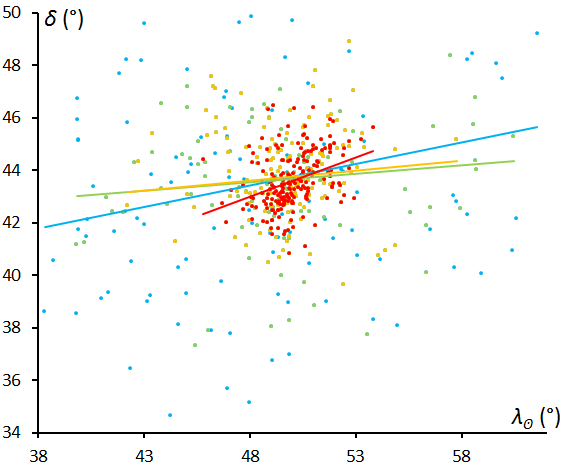 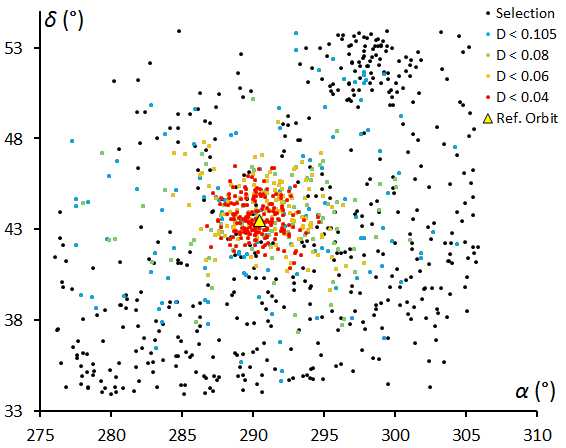 Figure 7 – Plot of the 377 radiant positions as selected. The different colors represent the 4 different levels of similarity according to different threshold levels in the D-criteria. 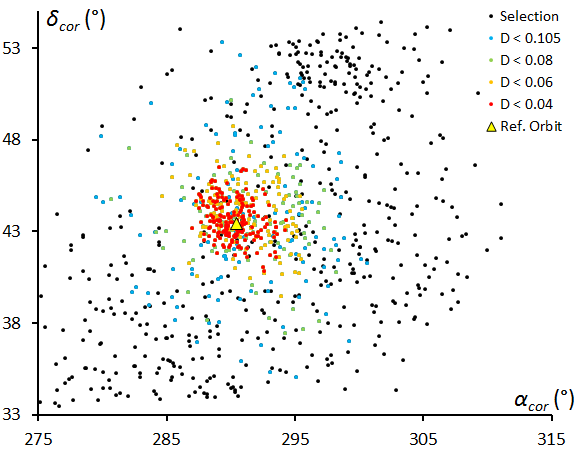 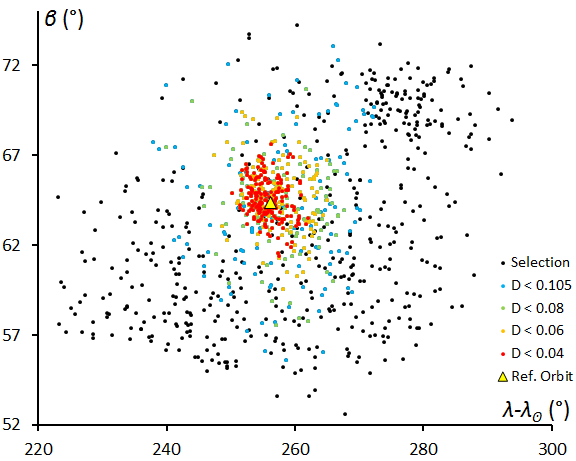 Figure 9 – Plot of the ecliptic latitude β against the Sun centered longitude λ – λʘ. The different colors represent the 4 different levels of similarity.

Dr. Peter Jenniskens (Jenniskens et al., 2016) classified this shower with the established long-period comet showers. This type of meteor shower tend to display activity during a limited period of time, during 10° or less degrees of solar longitude and have a rather compact radiant, characteristics that prove valid for the eta Lyrids and appear from Figures 4, 8 and 9. Unexpected outbursts happened for various other meteor streams of this type, but not yet for the η-Lyrids (ELY-145) so far. Figure 10 shows the different orbits listed in Table 3 in a 3D view. The eta Lyrids are produced by dust trails that were left behind by the parent comet, inside the comet orbit.

A search on the orbital data from the major video camera networks worldwide, good for ~686000 orbits (status May 2018), resulted in 543 candidate ELY-orbits. 199 orbits fulfill the high threshold D-criteria of DD < 0.04. An analysis of the available orbits proved the presence of a distinct cluster of similar orbits independently from previous stream searches. The resulting reference orbit compares very well with the previously published orbits.

Members of this shower have been detected every year since 2007 in a time span between 45° and 53° in solar longitude with a rather sharp maximum at about λʘ = 49.5±0.2°. There is no indication of any periodicity in the stream activity. This minor shower displays an activity with statistical relevant hourly rates around its maximum to be observed by experienced visual observers. This type of shower associated with long periodic comets may sooner or later surprise observers with an outburst when Earth encounters a more dense dust trail released by this comet. Alertness around 10 May for eta Lyrid activity is highly recommended.

The authors are very grateful to Jakub Koukal for updating the dataset of EDMOND with the most recent data, to SonotaCo Network (Simultaneously Observed Meteor Data Sets SNM2007–SNM2017), to CAMS (2010–2013) and to all camera operators involved in these camera networks.

Molau S. and Rendtel J. (2009). “A comprehensive list of meteor showers obtained from 10 years of observations with the IMO Video Meteor network”. WGN, Journal of the International Meteor Organization, 37, 98–121.