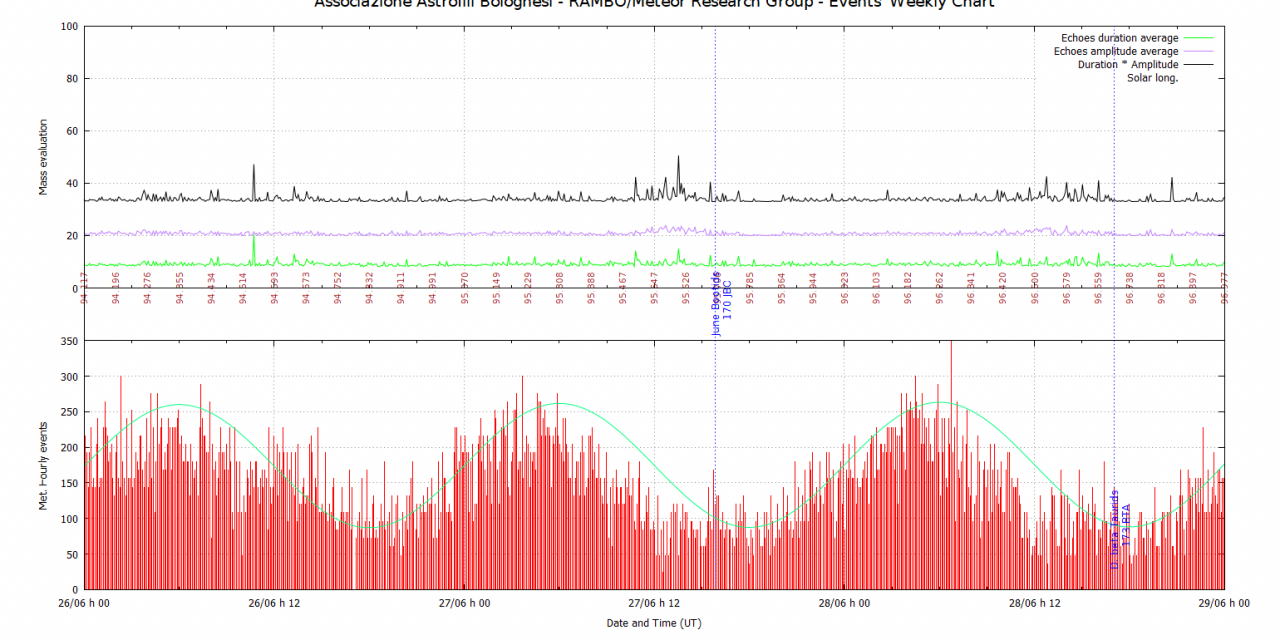 The meteorological radar RAMBo detected a sudden increase in meteor activity on June 27, 2018. It was possibly caused by a small outburst of the June Bootids stream.

On June 27th, around 16h00m UT our meteor radar RAMBo recorded a peak in meteor activity, associated with an increase in the measured meteor masses.

Day light measurements obviously do not allow visual feedback and therefore these make it difficult to identify which stream is responsible for the recorded outburst.

However, a clue comes from the fact that the timetable perfectly coincides with the International Astronomical Union (IAU) meteor showers forecast, which provides a maximum activity for the June Bootids at 15h49m on 27 June 2018. At that time the radiant height of the stream for Bologna, was 50° above the horizon.

The June Bootids (#170–JBO) are usually a very weak stream, with a radiant in the constellation of Bootes at Right Ascension 220° and declination +48°; these are very slow, (14 km/sec) and therefore very spectacular. Their velocity is at the lower limit in the range of meteor velocities. The parent body is the comet 7P/ Pons-Winnecke which orbits the Sun in 6.37 years on an orbit confined within the orbit of Jupiter. Its last passage to perihelion was in January 2015. The meteor stream generated by its activity, the June Bootids, is considered by astronomers to be completely unpredictable, having generated outbursts in the years: 1916, 1921, 1927, 1998 and 2004. In 1998 the outburst was very intense and lasted seven hours.

The lower part of Figure 1 (in red) represents the HR (Hourly Rate). You can see that the event lasted about 20 minutes (the measure represented in each column lasts 5 minutes). You can also note that it was preceded (upper part of the graph) for at least three hours in which both the duration and the amplitude of the detected meteor echoes show a more massive than usual bombardment of meteors (black line). This could suggest that we are seeing a shower in which a more rarefied but more massive component proceeds the most numerous but less massive component of 16h UT. The solar longitude of the event is 95.700°. Furthermore, in the same graph, we can see that even the Beta Taurids shower, another daylight shower, although much lower on the horizon (10°), exactly 24 hours later, seems to have left a small trace on our recordings. 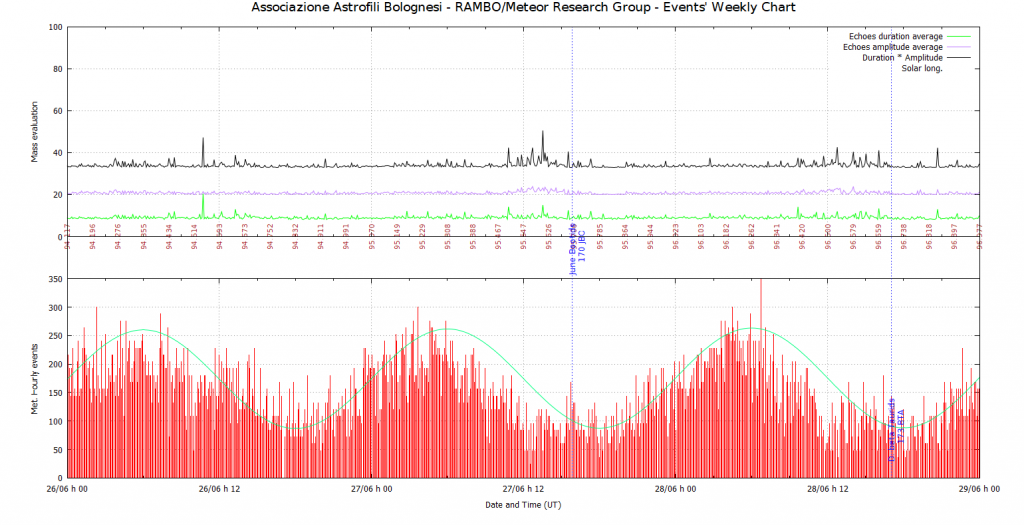