Introduction
In 2018 the Lyrids would not be very favorable. A New Moon on April 14 means in the pre-nights after April 20 some moonlight. The nights 21/22 and 22/23 April would still be more than respectively 2 hours and 1 hour of moonless dark skies in the Netherlands. Fortunately, the weather cooperated very well in that period and I could observe the Lyrids during many nights. I made the following observing report:

April 16/17
The night of Monday on Tuesday was almost entirely clear. As the weather was expected clear all week, I decided to keep a bit of a steady rhythm so that I could keep observing in a normal way because I had a regular working week. That meant getting to bed early at 17 UT in the evening and setting the alarm at 23 UT.
When I arrived at the Groevenbeek Heide (a heath), there were some fog banks, but these soon dissolved. The observations started at 23:33 UT. The sky was nice and dark and very transparent. The Milky Way was visible from Cassiopeia to the Sagittarius. There was surprisingly little air traffic and also little road traffic. Only the last half hour more traffic was audible.
The meteor activity was somewhat disappointing, given the beautiful starry sky. In total, 29 meteors were seen during 3 hours and 19 minutes with a lm of 6.4. SQM (Sky Quality Meter) values ​​rose to 20.42 maximum. Amongst those 29 meteors there were 2 Antihelions and 6 Lyrids. The most beautiful was a magnitude +2 Lyrid with a flare near the radiant in Hercules. A +2 ANT a few minutes later in Cassiopeia was also worth the watch. The Lyrid hourly counts were resp. 2.2, and 2. At 2:10 UT I saw, somewhat surprised, thick plucks of cirrus hanging in the west, which gradually shifted eastwards. From 2:35 UT the cirrus moved into my field of view. At 2:52 UT I ended the observations. The twilight had already made its appearance. I still enjoyed the view: Jupiter in the southwest, Antares in the south and in the east the planets Saturn and Mars in the constellation of Sagittarius. The temperature had dropped to -2 degrees Celsius.

During the evenings heavy cirrus clouds were moving over the Netherlands, but they were dissolved when I started the observations at 23:57 UT. Because of my job during the day I took this time a shorter session.  The Groevenbeek Heath was us as location again. In the first hour there were some very thin remnants of the cirrus clouds, the sky looked a little light and the transparency was a bit less. After half an hour this was all past and the weather was nice and clear. The lm improved to 6.4, the SQM rose to 20.43. The temperature dropped from +3 to +1 degree Celsius. Furthermore, it was striking that there was a lot of (air) traffic this night.
During these 2.55 hours I counted 27 meteors of which 7 were Lyrids. There was also some more beautiful stuff. A +2 ANT in Hercules, as well as a +1 sporadic meteor both in Hercules were beautiful. At 1:53 UT a +1 Lyrid in Cassiopeia and while I reported the data on my Dictaphone, I saw something “bright” moving low in the northeast. I also saw a persistent train that was visible for 5 seconds. It was a beautiful -2 sporadic meteor.

This night I observed again from the Groevenbeek Heide between 23:52 and 02:30 UT. The conditions were now clearly less. The sky background was lighter and here and there some patches of very thin cirrus were visible. Low in the southeast below 5 degrees thicker cirrus was visible, Antares was barely visible. The planets Saturn and Mars were also barely visible at first. Later it did improve somewhat when the cirrus had disappeared in the southeast. However, new cirrus was emerging from the southwest, but this only reached my FOV (field of view) after the end of the observations. The limiting magnitude was 6.3.  The SQM meter did not go beyond 20.35. The temperature rose from 11 to 13 degrees during the night. This was due to an increasing southeastern wind.

The moderate sky affected the number of meteors I observed, I counted 22 meteors including 7 Lyrids and 2 Antihelions. A +2 Lyrid and especially the magnitude 0 Antihelion were the highlight of this session. The bluish Antihelion was nice to see with some fragmentation. The time was 01:34 UT.

Furthermore, it was worth noting that I could once again observe a NOSS duo. The wax was visible around 23:59 UT and moved from Boötes to Draco, each magnitude +4, roughly 1 degree apart.

Because I had to start a bit earlier today at my job, I went again for a shorter session. Location: Groevenbeek Heide. I could observe between 23:46 and 02:00 UT. The sky had deteriorated a bit compared to the previous night. The lm initially was +6.3 but gradually declined to 6.2. The SQM meter gave values from 20.34 decreasing to 20.26. Nevertheless, 24 meteors were still seen. A nice blue +1 APEX meteor rose from the south-eastern horizon with a persistent train of 3 seconds.

This night was clear in the evening, but it was very hazy. And a weather check just after 23 UT taught me that it was still very hazy: lm 5.8. When I left for work more than two hours later, it was mostly cloudy. So no observations were done from Ermelo that night.

Since the Lyrid maximum was expected on 22 April 2018 around 20 UT, this and the next nights were the important ones. The weather forecasts were not good for this night. For several days, Dutch weather institution KNMI indicated that the cloud cover would increase during the course of the night. However, on Saturday the 21st, clearings were predicted. During the day plenty of cirrus, but in the evening it seemed to dissolve. I did a short 2-hour-long nap in the evening. In that period the all sky camera recorded a long Lyrid of magnitude -4 with final flare. When I was awake the sky was clear. When I biked to the heath, the Moon was low in the west and there were some small patches of cirrus visible here and there. Only low in the west there was thicker cirrus visible.

I started at 23:34 UT with a lm of 5.8 obtained in area 11 (Boötes). After 00:26 UT the Moon was no longer visible, it was already low in the west behind the thicker cirrus clouds. Sky conditions had lm 6.2 at that time. The lm improved even further to 6.4 and then decreased again due to the upcoming dusk. After 2:10 UT the sky deteriorated: a kind of haze moved in from the southwest, causing the lm to drop to 6.2, while thicker cirrus was approaching from the same direction.

After 02:30 UT, the lm continued to drop as a result of the advancing twilight. 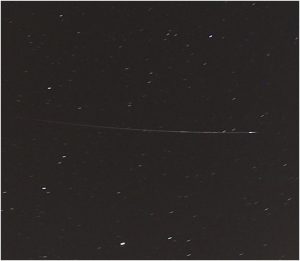 The activity of the Lyrids was rather flat this night. Half-hour counts of 3 to 4 were the norm. Most Lyrids were weak. A pair of +1 that appeared right behind each other were the most beautiful ones. In total I observed 45 meteors between 23:34 and 02:50 UT, with 23 Lyrids and 2 Antihelions. Despite the slightly lesser observing circumstances, it was a good result. It was more than I expected based on the weather forecast.

In the evening we got a bright clear sky but this was soon followed by increasing cirrus and a passage of high clouds, then came middle level clouds and finally it was clearing up again and clear from 1:34 to 2:35. In that last period I did a short session, but the sky was very hazy with lm variable between 5.9 and 6.1. Because of the weather I decided this time to observe on the flat roof of my dormer.

I was not disappointed: the first meteor I observed was a -2 Lyrid in Cepheus which was also nicely recorded with CAMS 353. During a break because of some passing clouds, I saw another magn. 0 Lyrid between the clouds and at 2:20 UT a very beautiful -3 Lyrid in Draco with a persistent train of 5 seconds. In addition, a number of +1 Lyrids were seen. During this short period of 0.933 hour I counted 11 Lyrids, 1 Antihelion and 5 sporadic meteors. In total I had 17 meteors. This was visually the final observation night for the Lyrids 2018. For me this Lyrid year was very successful. 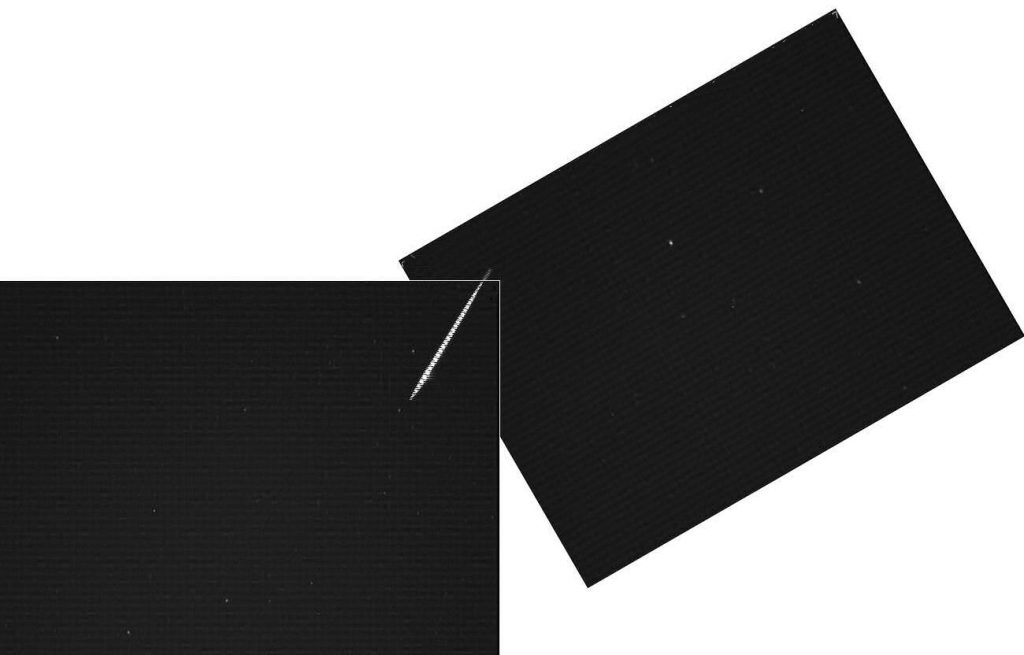 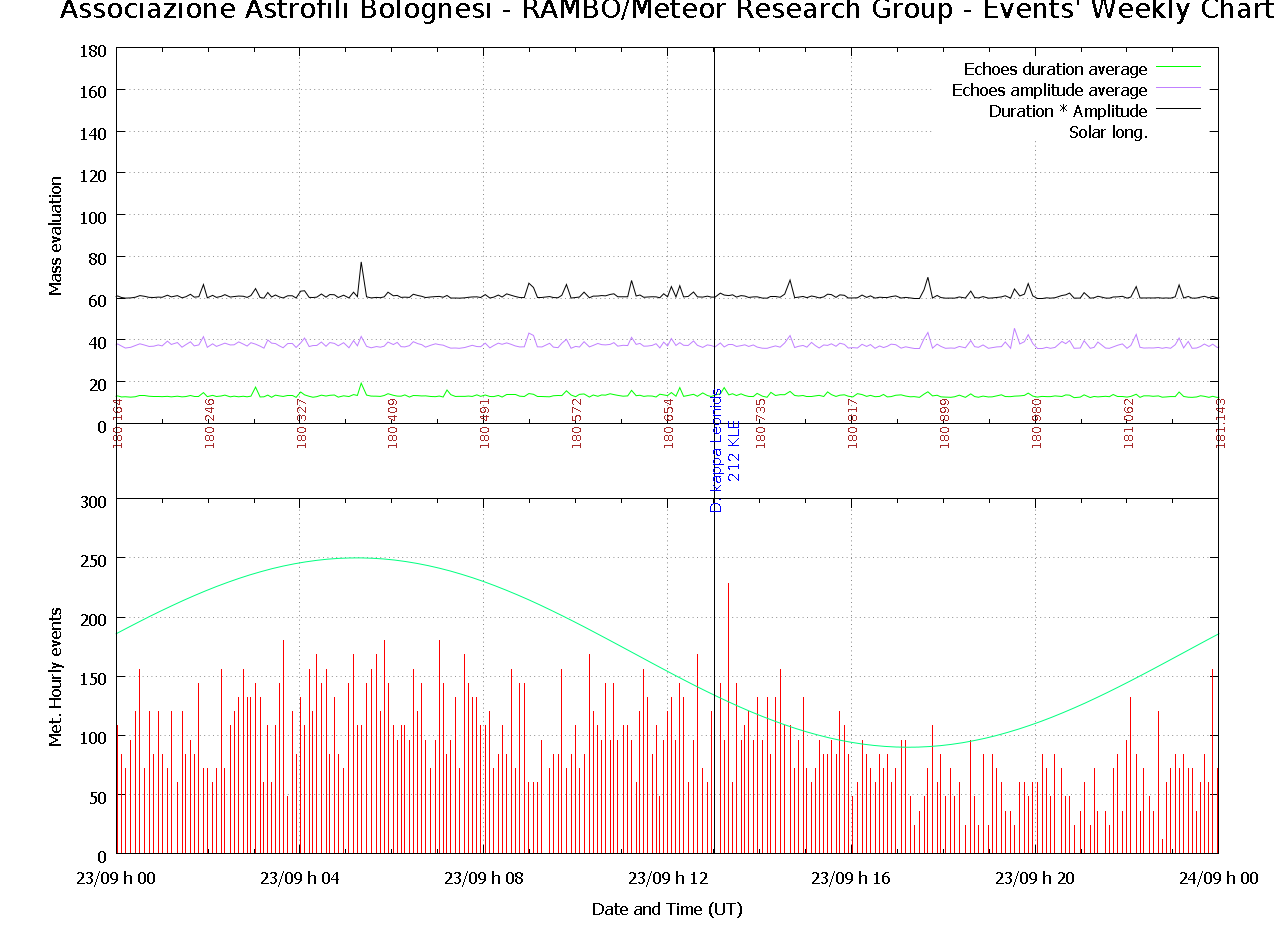 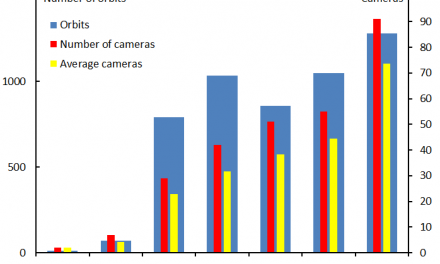