Gosh! I wrote in the Orionids report of 2017 about the enormous lack of Scandinavian high pressure areas in recent years. These weather systems often cause an offshore wind with many clear nights in the Netherlands as a result. Since April 2018 it is a coming and going of these high pressure areas in those parts, a situation that already lasts until the moment of writing this report (end of July). After the successful Lyrid campaign, I was eagerly awaiting the next moonless period. But even during the moonlight period, observations were made to see some eta Aquariids (ETA’s).

Observing the ETA’s in the Netherlands is a “sport”. A serious analysis of Dutch ETA observations is not possible because the radiant level in the Netherlands remains low to 10-12 degrees. The twilight begins at the same time as the radiant rises (around 01:10 UT). For the Dutch meteor-observer there is a short time frame of 1.0 or 1.5 hours in which you could see one, two or sometimes three ETA’s during dusk. But often nothing is seen. The emerging radiant is always acting versus the increasing twilight. Here is my report.

This night the diminishing half-full moon would still disturb during the period when the ETA’s are visible. But because the transparency was very good, visual observations were made. I observed from the flat roof of my dormer, looking in northern direction. The observations started at 00:45 and ended at 02:00 UT. In that period I counted 10 meteors. Two minutes after the start I immediately saw the most beautiful meteor from this session: a beautiful earth grazer moving from Cygnus to Draco with all ETA characteristics: bluish in color, the right speed and a 3 second persistent train. However, the ETA radiant is still under the horizon at that moment. Several CAMS stations have recorded this meteor and it was as expected not an ETA.

Again a very clear night but there was still a lot of moonlight during the ETA observations. I could observe from 00:25 and 01:55 UT, limiting magnitude dropped from 6.0 to 5.4 in this period. I counted 9 meteors including a +3 ANT and a +2 ETA. This was also in Cassiopeia again, just like the ETA from the previous night. Unfortunately   just outside the field of view of my CAMS 354 camera. However, despite the meteor as seen from Ermelo having the right ETA characteristics (speed, radiant), CAMS data from Texel and Terschelling showed that it was not an ETA. So no ETA‘s were seen this night.

It was weekend and a clear night on the way! Also a quite night, there were hardly any cars or planes to hear. Between 23:25 and 02:43 UT I could observe. Moonrise was around 00:15 UT, but only after 00:43 UT the Moon appeared above the edge of the trees. What an incredibly clear night this was with the highest SQM (Sky Quality Meter) ever achieved on the Groevenbeek Heide: 20.60. Normally, under well-clear conditions, 20.40-20.45 is the norm. The Lm dropped from 6.4 to 4.9 during this session.

It was also an atmospheric night, first there was the planet Jupiter, the constellation of Scorpio and later in the night the trio: Moon, Saturn and Mars close together. At 23:30 UT I saw a bright magnitude -6 Iridium flare from the Iridium 10 satellite under Boötes. A few times I was accompanied by an owl and a few times a cuckoo was heard.

Many satellites were seen. At 00:31 UT, two satellites close together, forming an inverted trapezium with the stars delta and epsilon OPH and moving from north to south. Both +3 of which the right one lit up to +1 and then extinguished to +4. Further at 2:14 UT a very fast fluctuating satellite (maximum magn. +1) was seen moving from Polaris to the south.

During this session I observed two ETA’s.  Damn: I actually wanted to continue observing until 2:50 UT, but decided to stop at 02:34 UT. What do you think: a beautiful -1 ETA was caught with CAMS 354 one minute after I stopped, right in my field of view…. In total I counted 27 meteors of which 2 ETA and 5 ANT. 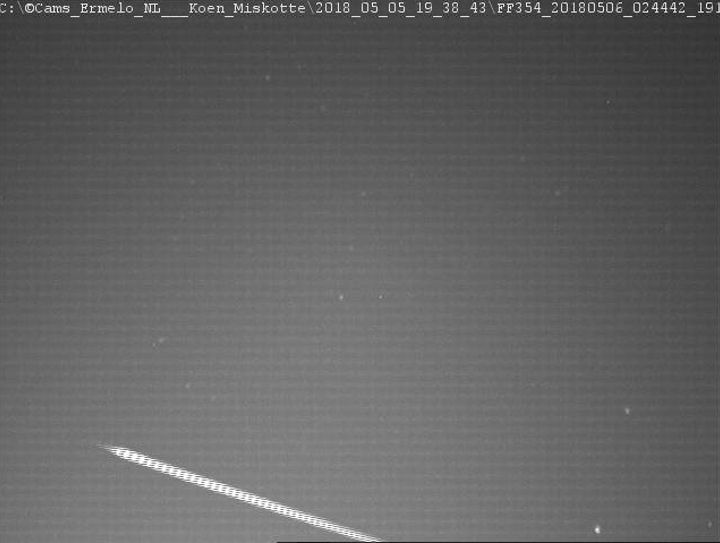 A long three hours session was held on the heath during this night and again with very good observing conditions, SQM 20,45-20,49 until moonrise. Despite the fact that the meteor activity was very mediocre, it was still very enjoying. The sounds of a cuckoo from the forest, an owl or a fox in combination with the beautiful starry sky, the Milky Way, Mars, Saturn, Jupiter and moonlight was amazing. The rapidly increasing chirping of the skylarks at the end of the session completed this symphony of nature.

In total I counted 28 meteors between 23:35 and 02:50 UT, including 6 possible ELY (eta Lyrids), 5 ANT and 1 ETA. This night I observed a little longer than yesterday with the -1 ETA I missed in the back of my head. That was rewarded, because at about the same time a beautiful white magnitude 0 ETA was seen with a persistent train in Cepheus. It turned out that this meteor was also captured by CAMS 354! An ETA of +4 around 2:26 UT in Cepheus was not seen, as well as a +3 in Pegasus at 2:45:57 UT. The sky might have been already too bright to make these meteors visible to the naked eye, but CAMS captured it without problems. 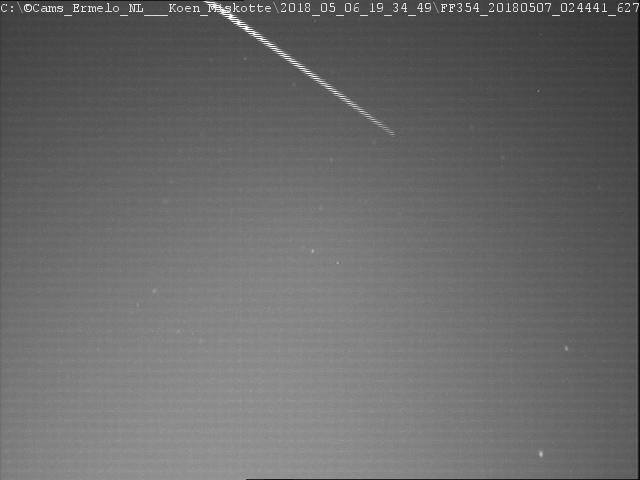 This night I observed from the flat roof of my dormer. Again a transparent sky (Lm 6.28), but the SQM measurements were far behind of what you would expect with a maximum of just 20.23. This session I have been observing between 00:00 and 02:30 UT. In total I counted 18 meteors of which 3 ANT, 3 ELY and 1 ETA. The latter was also recorded by several CAMS systems. At 1:47 UT a +1 SPO was seen, also recorded with CAMS 352.

Again a clear night with good transparency (Lm 6.3) but again the SQM measurements (20.27 and decreasing) were slightly disappointing. I observed between 23:45 and 01:17 UT. At 01:17 UT the sky became cloudy, so no ETA’s were seen during this session. A total of 14 meteors were observed, 3 of which were ELY and 2 ANT.

One of the last moonless nights in this period was 20-21 May. With a setting Moon at 0:25 UT (40%) there was one hour of darkness. This session I was observing from the Groevenbeek Heide between 23:00 and 01:34 UT. It was again a very nice clear night! The SQM increased from 20.32 (with moonlight!) to 20.47 and then descending again. Limiting magnitude was 6.3.
A beautiful +1 SPO in Serpens and a yellow magnitude 0 in Delphinus were the most beautiful meteors. In total I counted 24 meteors, amongst them 5 ANT. No ETA’s were seen during this session.
Many satellites were also visible, at 00:03 UT a -6 Iridium flare caused by Iridium 98, a passage of ISS at 00:27 UT and at 00:17 UT the bright NOSS duo appeared in the southern part of Ophiuchus. According to Marco Langbroek, this was the NOSS 3-8 duo.

A big thank you for Paul Roggemans for checking my English!