A summary of the activity of the CAMS BeNeLux network during the month of May 2018 is presented. The month started with exceptional dry weather and clear nights just in time to cover the Eta Aquariid activity period. 13630 meteors were recorded, 7310 of which proved multiple station, or 54%. In total 2426 orbits were collected during this month, including many Eta Aquariid orbits.

After the final few nights of April suffering from unstable cloudy sky, a period with exceptional stable weather offered excellent observing circumstances during the first 10 nights of May, providing excellent coverage of the Eta Aquariid activity. A record number of orbits for the month of May were collected, mainly during these first 10 nights.

CAMS BeNeLux collected 13630 meteors of which 7310 or 54% were multi-station, good for 2426 orbits. This was the best month of May since 2012 without any single night with zero orbits. The statistics of May 2018 are compared in Figure 1 and Table 1 with the same month in previous years since the start of CAMS BeNeLux in 2012.

Less bad luck with technical problems than previous months and the general favorable weather explain the success of May 2018 with a very good coverage of the Eta Aquariids activity. The best nights occurred during the first 10 nights of May, while the next 3 weeks offered only partial clear nights as well as several nights with mostly cloudy skies. During the best nights up to 84 cameras were operational. Thanks to AutoCAMS 64 cameras were all nights operational, more than ever before. On average 91.2% of the available cameras were active, the best efficiency rate ever. This explains the high ratio of multiple station events; as many as 54% of all detected meteors were multiple station with a good orbit solution. The ratio of multiple station coincidences depends on the number of stations with clear sky during the same time span. The more stable the weather conditions are network wide and the less technical problems, the better the chances to catch a meteor from at least two stations. The exceptional dry weather in May, blessed with a lot of clear sky got close to February 2018 which had similar circumstances combined with much longer nights (Roggemans, 2018). 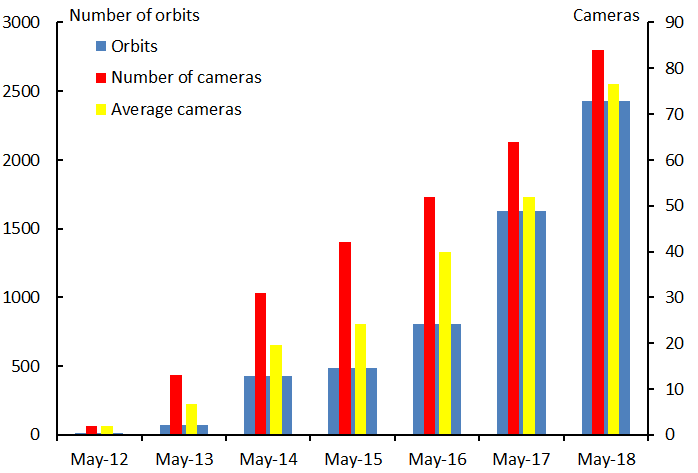 May made a brilliant start with overall very good nights during the first 10 nights, a perfect timing for an optimal coverage of the Eta Aquariids. May 2018 will likely remain the best month of May in the history of the BeNeLux CAMS network, unless mother nature has more pleasant surprises to offer in future years.

Many thanks to all participants in the CAMS BeNeLux network for their dedicated efforts. Thanks to Carl Johannink for providing all the data on which this report is based. The CAMS BeNeLux team was operated by the following volunteers during the month of May 2018: 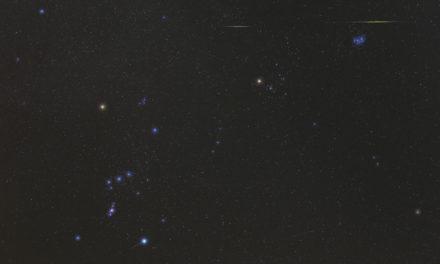