A summary of the activity of the CAMS BeNeLux network during the month of June 2018 is presented. The month was characterized by many cloudy nights and rather few nights with clear sky. 8218 meteors were captured, 3864 of which proved multiple station, or 47%. A total of 1425 orbits were collected during this month.

After the rather poor last two weeks of May, June continued with the same kind of weather pattern, dry but mostly cloudy sky. The shortest nights of the year are a challenge to collect orbits at the latitudes of the CAMS BeNeLux network, also because the overall meteor activity is about at its minimum level first weeks of June. Could June 2018 offer better results than previous years?

CAMS BeNeLux collected 8218 meteors of which 3864 or 47% were multi-station, good for 1425 orbits. June is the most difficult month for CAMS BeNeLux because of the short observing window of barely 5 hours dark sky each night. June 2018 brought mediocre weather conditions although the lack of rain caused serious problems of drought for agriculture, the sky remained cloudy on many nights resulting in rather low numbers of orbits for most nights. Two nights remained without any double station meteors. Only 5–6 June and the last week of June brought clear nights. The statistics of June 2018 are compared in Figure 1 and Table 1 with the same month in previous years since the start of CAMS BeNeLux in 2012.

A great catastrophe happened at Ooltgenplaat on 6–7 June as an overheated PC caused a fire in the observatory of CAMS member Piet Neels, destroying all the electronic and optical equipment. Since then CAMS station Ooltgenplaat with its 10 cameras could no longer function. A tragedy for Piet Neels but also a huge loss for the CAMS BeNeLux network as a whole. Piet Neels and his CAMS station was one of the first two stations to start with the CAMS BeNeLux network and was one of the cornerstones of the network providing coverage to about three quarter of all cameras at other stations. The disaster at Ooltgenplaat happened while the nearby CAMS station Oostkapelle with 8 cameras, another cornerstone of the CAMS network, remained out of service for ongoing renovation work. As a result, the coverage of the atmosphere over the entire South-western region of the network and Belgium in particular became very thin, reducing the chances to get double station meteors for many other cameras.

To make things worse several other stations encountered technical problems, mainly failing dongles that had to wait for replacement Cameras 347 and 348 at Heesch went down for a series of nights, the 822 at Burlage had to be switched off for a long time, the 394 and 395 in Dourbes remained out of service for a week while almost no double station meteors were recorded on other nights by these cameras. 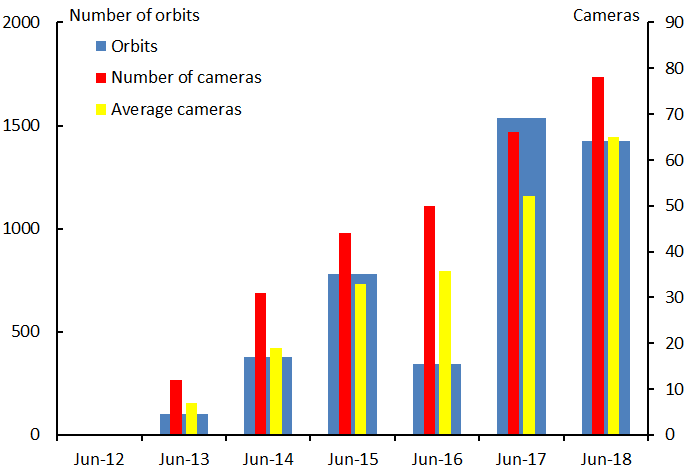 These technical problems and the rather poor weather explain the rather modest results of June 2018. During the best nights up to 78 cameras were operational. Thanks to AutoCAMS 52 cameras were all nights operational. On average 83% of the available cameras were active. As many as 47% of all detected meteors were multiple station with a good orbit solution. The ratio of multiple station coincidences depends on the number of stations with clear sky during the same time span. The more stable the weather conditions are network wide and the less technical problems, the better the chances to catch a meteor from at least two stations.

June 2018 was a month of bad luck for the CAMS BeNeLux network, with the fire at Piet Neels observatory in Ooltgenplaat destroying one of the most important CAMS stations and several less problematic technical issues at other stations. Since the weather was not favorable at all, we hope for a better month of June next year.

Many thanks to all participants in the CAMS BeNeLux network for their dedicated efforts. Thanks to Martin Breukers for providing all the data on which this report is based. The CAMS BeNeLux team was operated by the following volunteers during the month of June 2018: 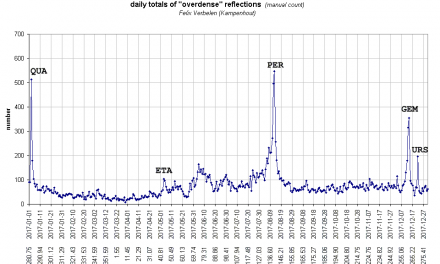