A summary of the activity of the CAMS BeNeLux network during the month of July 2018 is presented. July 2018 offered exceptional many clear nights resulting in 21446 meteors being recorded;11717 of which proved multiple station, or 55%. A total of 4098 orbits were collected during this month.

People associate July with nice good weather because it is a summer month, but for astronomical observations July proves often rather disappointing with few clear nights. Nighttime is still the shortest of the year, the number of hours to capture video meteors is limited to 5 up to 6 hours. The total meteor activity increases significantly in July compared with the low activity period in May and June. Some major showers such as Perseids, Delta Aquariids South and Alpha Capricornids display many extra meteors on top of the minor shower activity and rich sporadic background activity. Weather circumstances were unfavorable during July in past years, except for 2017 when 2644 orbits could be collected. What would July 2018 bring?

July 2018 offered more nights and hours with clear sky than any previous month of July since 2012. About half of all July nights were almost completely clear nights for the network, with most of the other nights offering reasonable chances to collect multiple station meteors under partial clear sky. All nights allowed to register meteors and only 9–10 July was too bad to have any single orbit. With only 9 orbits on 20–21 July and 13 orbits on 29–30 as poorest nights all other nights performed better. 22 nights had more than 100 orbits, 5 nights had more than 200 orbits. This way July 2018 was a most successful month for the network. The statistics of July 2018 are compared in Figure 1 and Table 1 with the same month in previous years since the start of CAMS BeNeLux in 2012. In 7 years, 161 July nights allowed to obtain orbits with a grand total of 10501 orbits collected during July in all these years.

The success of July 2018 masks the fact that the CAMS BeNeLux functioned, missing two of its major cornerstones, Ooltgenplaat with its 10 cameras and Oostkapelle with 8 cameras. The non-availability of these two strategic important camera stations had a major impact on the coverage of the meteor layer in the atmosphere for many other cameras at other CAMS stations. Hardware problems at some other stations also reduced the chances to get multiple station meteors. The cameras 394 and 395 at Dourbes recorded remarkable few multiple station events since weeks and were shut down on 2 July. Camera 822 in Burlage, Germany remained unavailable due to technical problems. Martin Breukers added a 10th camera at his CAMS station in Hengelo, the Netherlands.

Altogether at best 72 cameras were available in July, 59 of which functioned all nights thanks to AutoCams. On average 94% of all operational cameras were active, a record efficiency of the functional hardware. 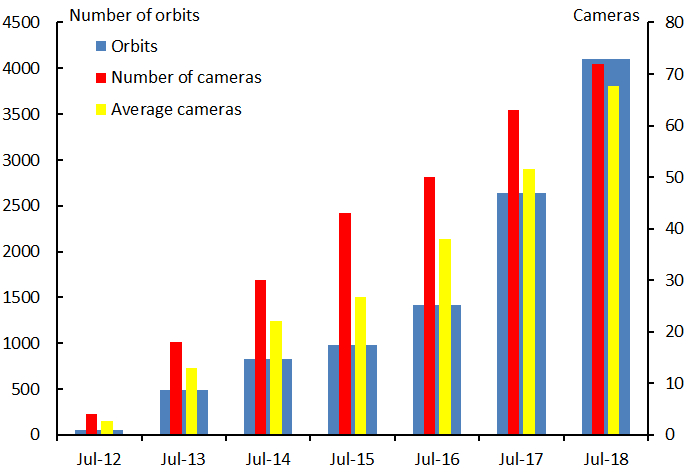 July 2018 became the most successful month of July in the CAMS BeNeLux history because of an exceptional large number of completely clear nights and many hours of clear sky during partial cloudy nights.

Many thanks to all participants in the CAMS BeNeLux network for their dedicated efforts. Thanks to Martin Breukers for providing all the data on which this report is based. The CAMS BeNeLux team was operated by the following volunteers during the month of July 2018: