A summary of the activity of the CAMS BeNeLux network during the month of August 2018 is presented. The time around the Perseid maximum had rather poor weather. 27917 meteors were recorded,15286 of which proved multiple station, or 55%. A total of 5403 orbits were collected during this month.

August is the most popular month among meteor observers because of the Perseid meteor shower that contributes many meteors on top of several other shower activities and a strong sporadic background. A good month of August often makes the year. August 2017 had a record number of orbits, a challenge to do better. What did August 2018 bring us?

CAMS BeNeLux collected 27917 meteors of which 15286 or 55% were multi-station, good for 5403 orbits. This is significant less than previous year when a record number of 8738 orbits were recorded. The main reason for the modest number of orbits is the poor weather during the best Perseid nights.

August 2018 started with several clear nights in the first week but weather deteriorated and most of the Perseid activity was lost due to poor observing conditions. The second half of August continued with variable sky conditions. Meteorologically August 2018 was exceptional dry, with a lot of sunshine and high temperatures, but clouds interfered during many nights limiting the number of double station meteors. The statistics of August 2018 are compared in Figure 1 and Table 1 with the same month in previous years since the start of CAMS BeNeLux in 2012. In 7 years, 189 August nights allowed to obtain orbits with a grand total of 26409 orbits collected during August during all these years together.

Apart from the weather the scores for August 2018 also suffered from the unavailability of several CAMS stations. The two major CAMS stations Ooltgenplaat and Oostkapelle remained out of service as well as Dourbes with its two cameras. Camera 386 at Langemark stopped functioning on 20 August. Both Gronau with 8 cameras and Ermelo with 4 cameras remained non-active for two weeks because of the summer holidays. Most camera operators use AutoCams with remote control to keep their cameras functioning during the summer holidays which is a great help to keep sufficient coverage of the atmosphere. While August 2017 had a maximum of 82 cameras, 69.9 on average available, August 2018 had to do with a maximum of 72 cameras, 62.4 on average. With less cameras and less favorable weather during the richest Perseid nights, the score of 5403 orbits is still a very nice result mainly thanks to the generalized use of AutoCAMS at most CAMS stations. It was the first time that the CAMS BeNeLux network had less cameras available than one year earlier.

For the first time in a while the CAMS BeNeLux network could welcome a new participant, Marco Van der weide in Hengelo with CAMS 3110. 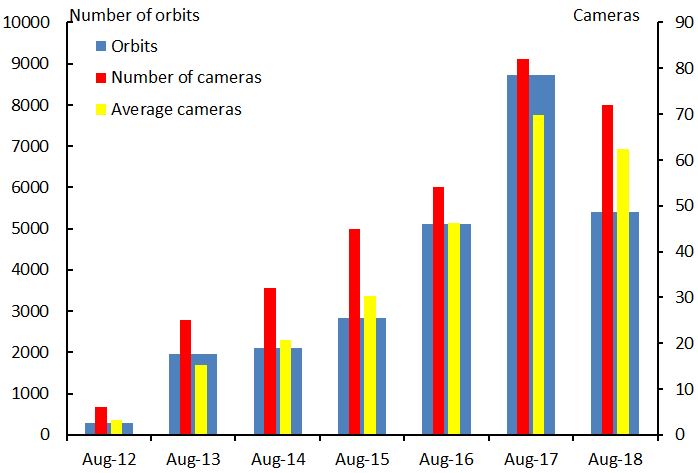 August 2018 ended with a nice new collection of orbits in spite of less favorable weather during the Perseid maximum and the unavailability of a significant number of cameras. Auto CAMs proved to be a great help to insure the availability of cameras during the summer holidays while the camera owners enjoy their vacation.

Many thanks to all participants in the CAMS BeNeLux network for their dedicated efforts. Thanks to Martin Breukers for providing all the data on which this report is based. The CAMS BeNeLux team was operated by the following volunteers during the month of August 2018: 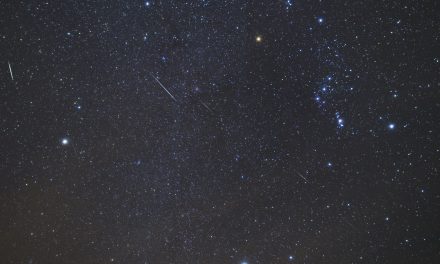