A summary of the activity of the CAMS BeNeLux network during the month of September 2018 is presented. September 2018 counted many clear nights. 29160 meteors were recorded,15833 of which proved multiple station, or 54%. A total of 5606 orbits were collected during this month.

September is a month with the richest meteor activity without any major shower contributing. Nights get longer and allow easily up to eight and more hours of capture. Most years September has stable and in general favorable weather for astronomy in the BeNeLux region. Past few years the network obtained impressive numbers of orbits during this month. Would 2018 confirm the reputation of the month September?

CAMS BeNeLux collected 29160 meteors of which 15833 or 54% were multi-station, good for 5606 orbits. This is a new record for the month of September. The exceptional dry weather that dominated 2018 since mid-April continued in September. This month counted as many as 19 nights with more than 100 orbits. The best September night was 28–29 with as many as 498 orbits in a single night. Only two nights remained without any orbits. The statistics of September 2018 are compared in Figure 1 and Table 1 with the same month in previous years since the start of CAMS BeNeLux in 2012. In 7 years, 180 September nights allowed to obtain orbits with a grand total of 19404 orbits collected during September during all these years together.

The strategic important CAMS station Oostkapelle was back operational end September after about 6 months of renovation work. Another cornerstone of the network, Ooltgenplaat, remained non-active as well as Dourbes and Langemark. Technical problems with some cameras at different stations could be solved within few days. While September 2017 had a maximum of 83 cameras, 70.2 on average available, September 2018 had 80 cameras at best and 65.4 on average. The record number of orbits was the result of the exceptional number of clear nights combined with the use of AutoCams at almost all stations.

On 4 September camera 3900 had its first orbits. This new camera operated by Tioga Gulon is installed in Nancy, France and has a large overlap with many other cameras. Whenever Nancy has clear sky, impressive numbers of orbits are obtained. During its first few weeks as many as 446 orbits were obtained, the highest score of all cameras. 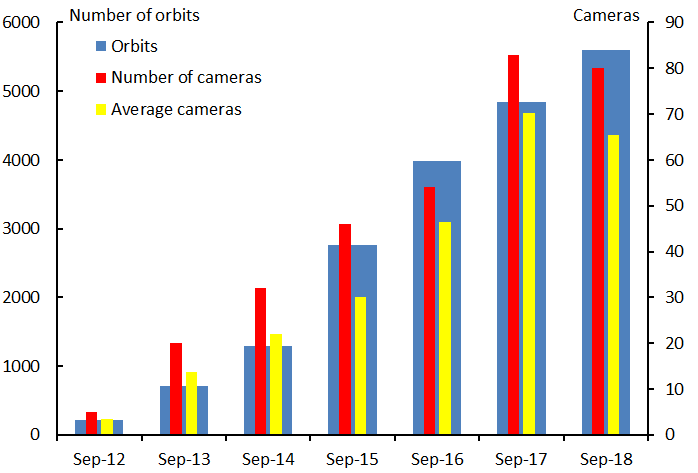 September 2018 confirmed the reputation of this month with a very rich background meteor activity and favorable weather. Even with less cameras more orbits were collected than in 2017.

Many thanks to all participants in the CAMS BeNeLux network for their dedicated efforts. Thanks to Martin Breukers for providing all the data on which this report is based. The CAMS BeNeLux team was operated by the following volunteers during the month of September 2018: