The month of November is characterized by frequent bad weather with a lot of clouds and humidity. Clear nights tend to be rather exceptional this period of the year, reason why the CAMS BeNeLux network scored rather modest numbers of orbits this time of the year. The long winter months with 13 to 14 hours of dark sky often cover variable weather circumstances with short periods with clear sky, while predictions and the situation at the start of the night appear hopeless. For such circumstances the use of AutoCams proves the best tool. Instead to keep the cameras switched off, expecting no clear sky, practice proves that it is recommended to keep cameras running in order not to miss the unpredictable changes in the weather pattern.

CAMS BeNeLux collected 38556 meteors of which 20535 or 53% were multi-station, good for 6916 orbits. This is again a new record for the month of November. The exceptional dry weather that dominated 2018 since mid-April remained during much of November until about the Leonid activity. This month counted as many as 16 nights with more than 100 orbits. Six nights produced more than 500 orbits in a single night. The best November night was 17–18 with as many as 4038 meteors registered, 2464 of which were multi-station, good for 790 orbits in this single night. Only two nights remained without any orbits. Weather deteriorated after this record night and we got into the usual typical poor autumn weather with a lot of clouds and rain.  The statistics of November 2018 are compared in Figure 1 and Table 1 with the same month in previous years since the start of CAMS BeNeLux in 2012. In 7 years, 152 November nights allowed to obtain orbits with a grand total of 16558 orbits collected during November during all these years together.

Three CAMS-stations, Ooltgenplaat, Dourbes and Langemark remained non-active this month. While November 2017 had a maximum of 88 cameras, 74.2 on average available, November 2018 had 85 cameras at best and 75.3 on average.

Never in the CAMS-BeNeLux history November offered such favorable opportunity to cover the rich meteor activity this period of the year. Especially the Leonid activity produced many Leonid orbits in 2018. Although most nights of November 2018 allowed observations, remarkable few fireballs were recorded, while previous years with less favorable weather had several bright fireball events. 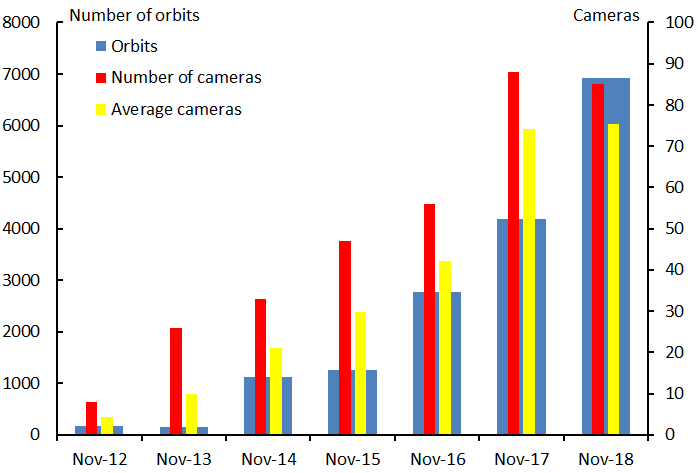 November 2018 was the best month of November in the history of the CAMS-BeNeLux network. The large number of orbits collected in 2018 confirms the exceptional rich meteor activity level during this month.

Many thanks to all participants in the CAMS BeNeLux network for their dedicated efforts. Thanks to Carl Johannink for providing all the data on which this report is based. The CAMS BeNeLux team was operated by the following volunteers during the month of November 2018: 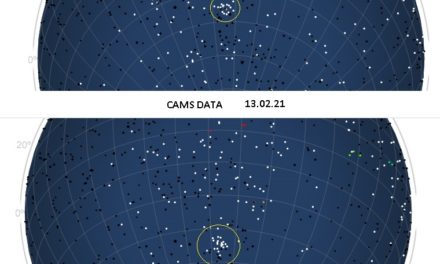