A summary of the activity of the CAMS BeNeLux network during the month of December 2018 is presented. December 2018 ended as the poorest month of 2018. 25912 meteors were recorded, 13220 of which proved multiple station, or 51%. Weather turned into the worst-case scenario with just a bit luck for good coverage of the best Geminid activity nights.

December is one of the winter months with the worst weather circumstances for astronomy in BeNeLux. While the nighttime allows for more than 14 hours of astronomical observing and meteor activity is very rich this month, results are often very disappointing. Any clear night yields large numbers of orbits, question is if we will be lucky and get some clear nights and if so, how many?

CAMS BeNeLux collected 25912 meteors of which 13220 or 51% were multi-station, good for 4908 orbits. This is a record for the month of December. The exceptional favorable weather we got most of 2018 was over and December suffered the usual poor weather pattern for this time of the year. This month counted 9 nights with more than 100 orbits but also as many as 8 nights without any orbits. For 3 nights not any single meteor could be recorded. The nice score in orbits for this month comes mainly from a lucky coincidence that some of the very few clear nights happened during the best Geminid activity nights. The best night was December 12–13 when as many as 6949 meteors were recorded, 4037 of which were multiple station and produced 1396 orbits in this single night. Without this little luck during the Geminid activity, the score in number of orbits would have been significantly less than in previous couple of years.

The statistics of December 2018 are compared in Figure 1 and Table 1 with the same month in previous years since the start of CAMS BeNeLux in 2012. In 7 years, 154 December nights allowed to obtain orbits with a grand total of 15503 orbits collected during December during all these years together.

Unfortunately, Ooltgenplaat, remained non-active as well as Ermelo and Langemark. Camera 395 could be restarted in Dourbes while the 394 waits for a next maintenance mission at the remote-controlled station to get focused. While December 2017 had a maximum of 86 cameras, 68.9 on average available, December 2018 had 78 cameras at best and 69.8 on average. 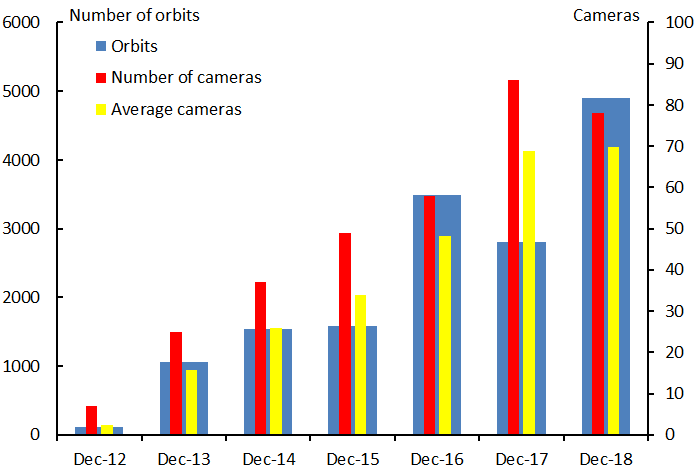 December 2018 in general was the worst month for CAMS BeNeLux of the entire year 2018. A little luck during the Geminid nights saved the month with a new record number of orbits for December.

Many thanks to all participants in the CAMS BeNeLux network for their dedicated efforts. Thanks to Carl Johannink for providing all the data on which this report is based. The CAMS BeNeLux team was operated by the following volunteers during the month of December 2018: