Abstract: The orbital distributions of dust particles in interplanetary space are inferred from several meteoroid data sets under the constraints imposed by the orbital evolution of the particles due to the planetary gravity and Poynting-Robertson effect. Infrared observations of the zodiacal cloud by the COBE DIRBE instrument, flux measurements by the dust detectors on board Galileo and Ulysses spacecraft, and the crater size distributions on lunar rock samples retrieved by the Apollo missions are fused into a single model. Within the model, the orbital distributions are expanded into a sum of contributions due to a number of known sources, including the asteroid belt with the emphasis on the prominent families Themis, Koronis, Eos and Veritas, as well as comets on Jupiter-encountering orbits. An attempt to incorporate the meteor orbit database acquired by the AMOR radar is also discussed.

This paper will be published in GERBERTVS: “Lunar impacts during eclipses separated by a Metonic cycle on Jan 21, 2000 and 2019: a possible origin from daytime Sagittarids/Capriconids meteor shower.” by Costantino Sigismondi.

Abstract: The lunar impact claimed by Zuluaga et al. (2019) during the total eclipse of 21 January has been discussed widely by his research group, introducing some results from the technique of gravitational ray-tracing. A similar event of magnitude 6 was observed visually by the author during the eclipse of 19 years before, that was published under the name of “Padua event” (Sigismondi and Imponente, 2000a,b) and a video was obtained independently by Gary Emerson (Cudnik, 2002) in the US at the same time. The remarkable repetition of such a phenomenon after 19 years deserves some investigation about known active meteor shower on Jan 21 with radiant comprised between the solar longitude 300.7° of January 21 and +/- 60° and declination also departing no more than 60° from the solar one. The amount of 60° is the FWHM of a simple modulated probability model on the visibility of a lunar meteor impact with the cosine of the angle comprised between the line of sight and the normal to the lunar surface. The candidate of this search is the daytime shower Sgr/Cap DSC115 with meteoroid velocities around 26 km/s.

May 5/6 2016 ETA observation from North Florida 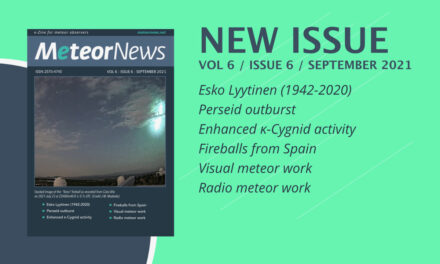