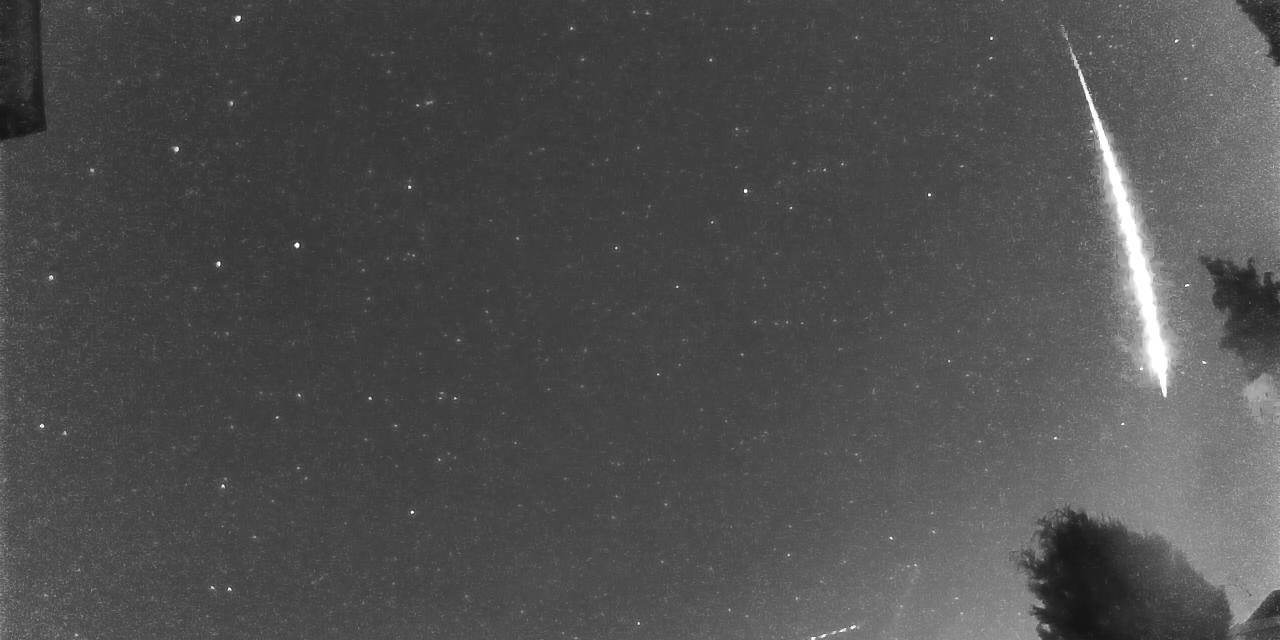 The first triangulation results of the Global Meteor Network Cameras in Belgium, Germany and the Netherlands are described. Between 2019 February 11 and 16, 28 trajectories and orbits were obtained. A particular fireball was associated with the DSE#034 meteor shower, removed from the IAU meteor shower working list. This requires further investigation if any meteor source is active at this position.

Some years ago, the Croatian team presented at the meteor conference in Austria the developments of a low costs video meteor camera to allow a wide coverage of the atmosphere (Zubović et al., 2015). Contrary to many other similar presentations at such conference these efforts were not idle talk and were developed further on (Vida et al., 2016). When the first results were published, the project caught wide attention among the meteor community (Vida et al., 2018a, 2018b).

When one of the authors was invited in March 2018 to participate in the project, the answer was immediately yes! 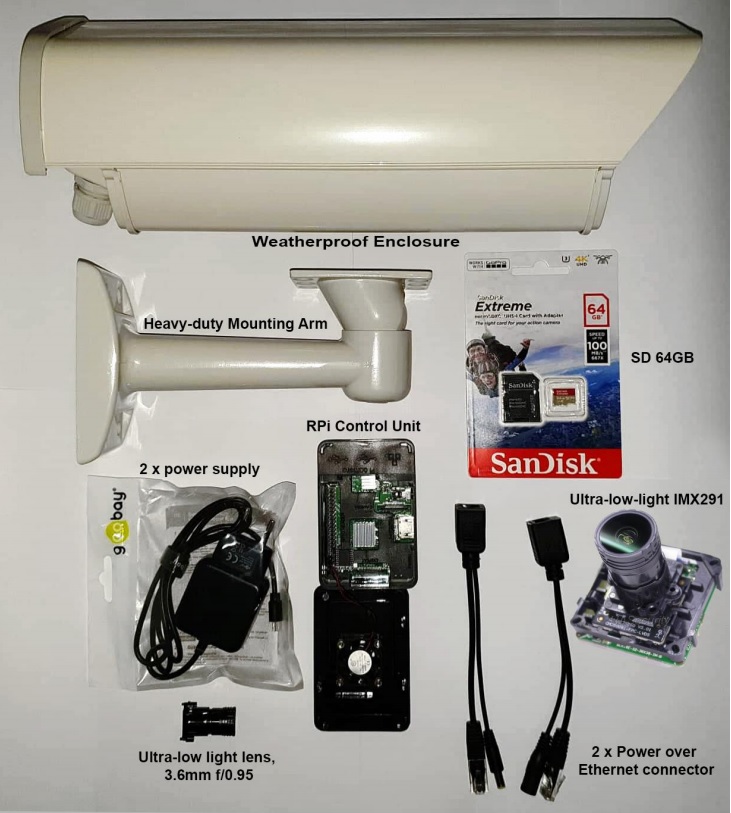 Figure 1 – The components of the RPi camera.

To be of interest to amateur astronomers any meteor video camera system should be easy to use and affordable since amateurs have only a limited amount of free time and budget to spend on a hobby. The advantage of the system is that this has been developed for amateurs, well aware of the typical concerns for the amateur community. All software is open source and user-friendly tutorials are provided online (https://globalmeteornetwork.org/?p=452).

The first camera for Belgium, BE0001 arrived in November 2018 completely assembled and configured. It only needed to be mounted on the wall and get connected to the control unit, power supply and internet. The components shown in Figure 1 were already assembled so that first light was just a matter of plug and play. Once the system was installed a number of software updates and modification were applied remotely by Denis Vida to get access to the RPi via the home network. Clear sky during the nights 9–10, 10–11, 11–12, 12–13 and 13–14 December with the Geminid activity, provided an excellent opportunity to test the system.

The mission statement of the project is well covered by its name: as many as possible cameras pointed at the sky to get a global coverage of the atmosphere. Too often in recent history meteor events such as outbursts or short-lived activity escaped from any visual coverage. The Global Meteor Network should help to avoid such sad loss of data about unique meteor shower happenings.

Developing the hardware and setting up such network requires huge efforts, lots of time and a great expertise. We strongly recommend to read the background history of this project, documented on the GMN website https://globalmeteornetwork.org/?p=363.

The scientific mission statement of the Global Meteor Network according to the GMN website https://globalmeteornetwork.org:

Soon after the start of BE0001 at Mechelen Belgium, NL0006 and NL0008 were installed and tested at Hengelo, the Netherlands as well as DE0001 at Langenfeld, Germany. Three GMN locations at a suitable distance for multiple station work inspired the three authors to point the cameras in such a way that meteors could be registered from the three locations. The weather was not very cooperative but a major improvement in the weather pattern brought several clear nights in February.

Between 2019 February 11 and 16, the authors started with simultaneous observations of meteors. In about one week of time 28 trajectories were obtained by Martin Breukers, using the Ufo Orbit software from Sonotaco.com to process the observations. The trajectory plots are shown in Figure 2, the radiant distribution in Figure 5. This is a nice and encouraging first result. 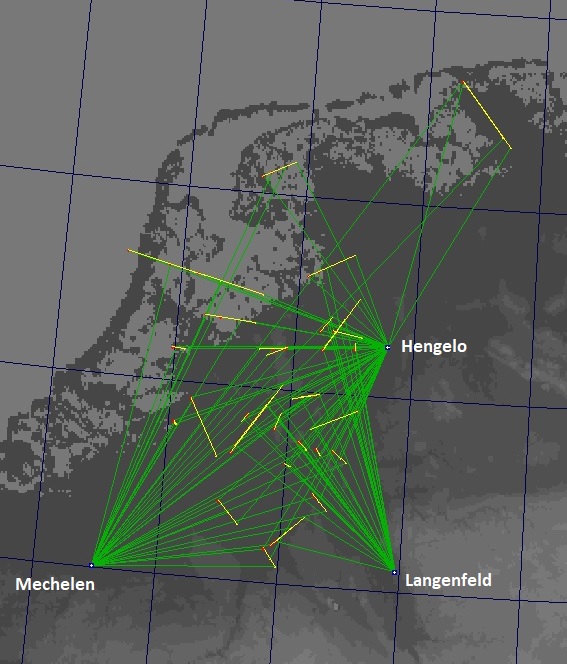 Figure 2 – The first 28 trajectories obtained by the GMN cameras in Hengelo, Langenfeld and Mechelen. 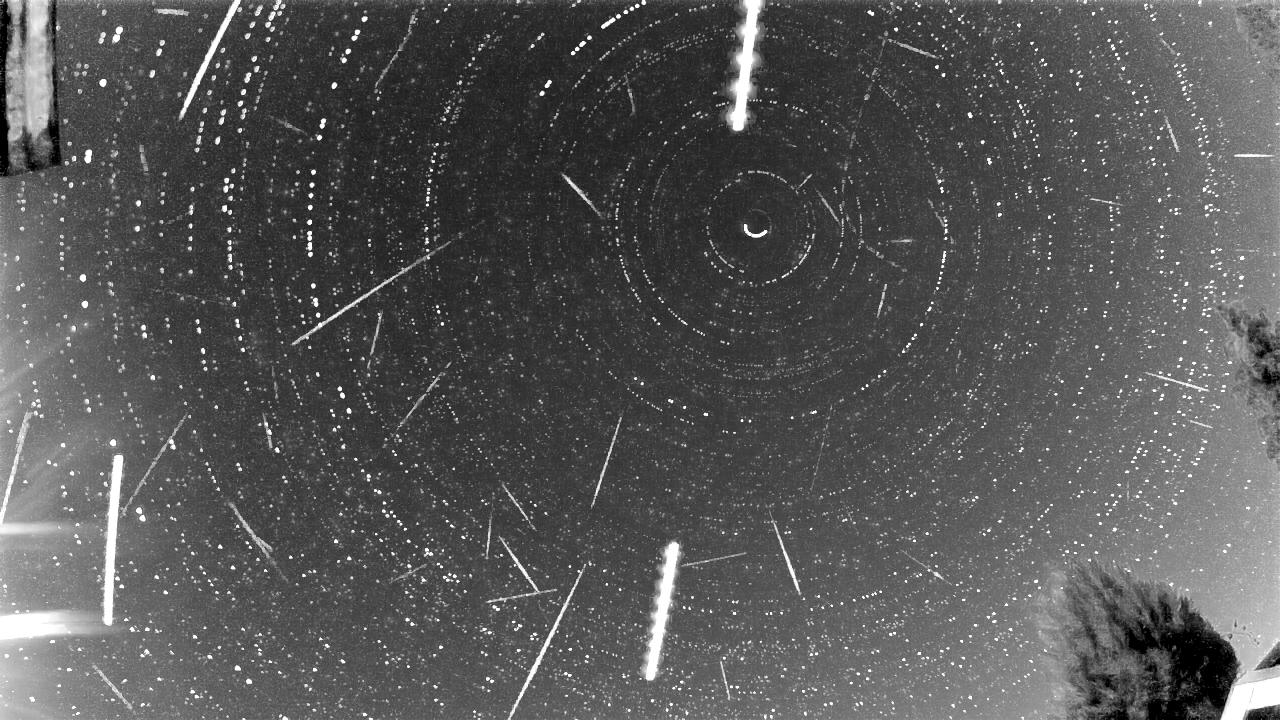 Figure 3 – Stacked image with 47 meteors and some planes registered by camera NL0008 at Hengelo the Netherlands in the night of 14–15 February 2019.

5 One of the first hits: a fireball!

The second simultaneous meteor was a –4 fireball that appeared on 2019 February 11 at 4h33m37s UT, recorded on NL0008 at Hengelo and BE0001 at Mechelen where it appeared very low above the horizon. The trajectory of the fireball was above Northern Germany, the most northern path plotted on the map shown in Figure 2. Figure 7 and 8 show the images as recorded by both cameras. 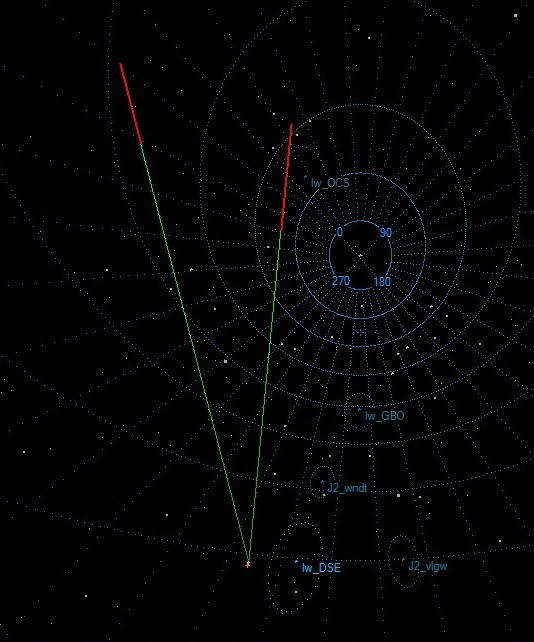 The UFOCapture software associates our fireball with the minor shower δ-Serpentids (DSE#34), however this shower has meanwhile been removed from the IAU Meteor Data Center for reason of lack of evidence. Also, our own tool to verify orbit similarity rejects the shower association, using all three discrimination criteria of Southworth and Hawkins (1963), Drummond (1981) and Jopek (1993). 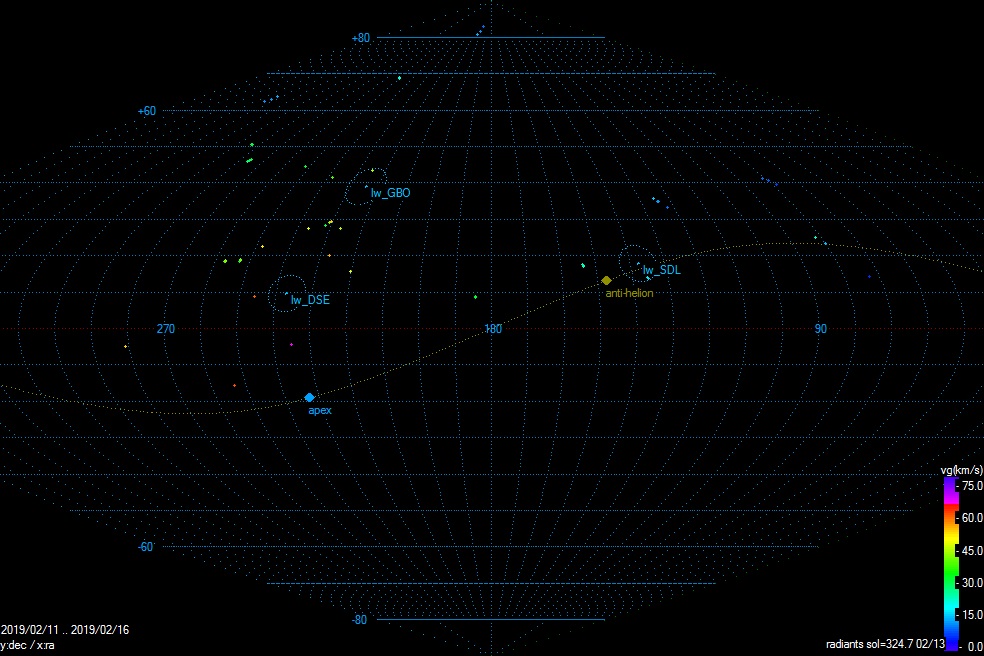 Figure 5 – The radiant plot for all 28 GMN multiple station meteors.

Table 1 – The orbital elements of the fireball of 2019 February 11 at 4h33m37s UT compared to the meteor shower DSE#034 that was removed from the IAU working list of meteor showers.

It is not clear how the shower DSE#034 got into the IAU meteor working list as the reference is missing. A parent body is mentioned as 1947 F2 (Becvar), but without any references. Figure 6 shows the orbit plot, Table 1 compares these with the data for DSE#034. That D-criteria fail on a similarity check is no surprise when the large difference in argument of perihelion ω is considered. Meteor orbits change with time and ω may have changed until a point that similarity criteria fail to indicate possible associations unless the evolution of the orbit can be reconstructed. This erroneous shower association by the SonotaCo software proves once more how tricky it is to associate meteors with showers looking no further than radiant and velocity. This case also proves the need to invest in multiple station work in order to obtain orbits and not just single station meteor trails. Making statistics based on single station meteor work for showers with activity levels below a certain detection level will always result in some numbers, but the results will vary randomly within the statistical flutter. 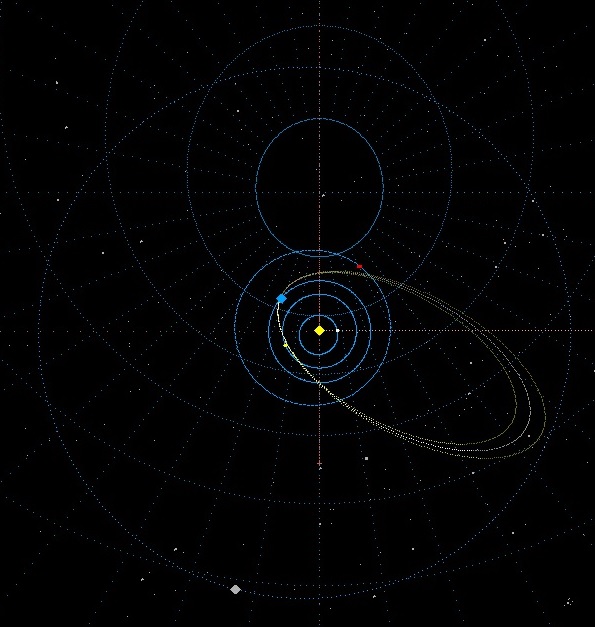 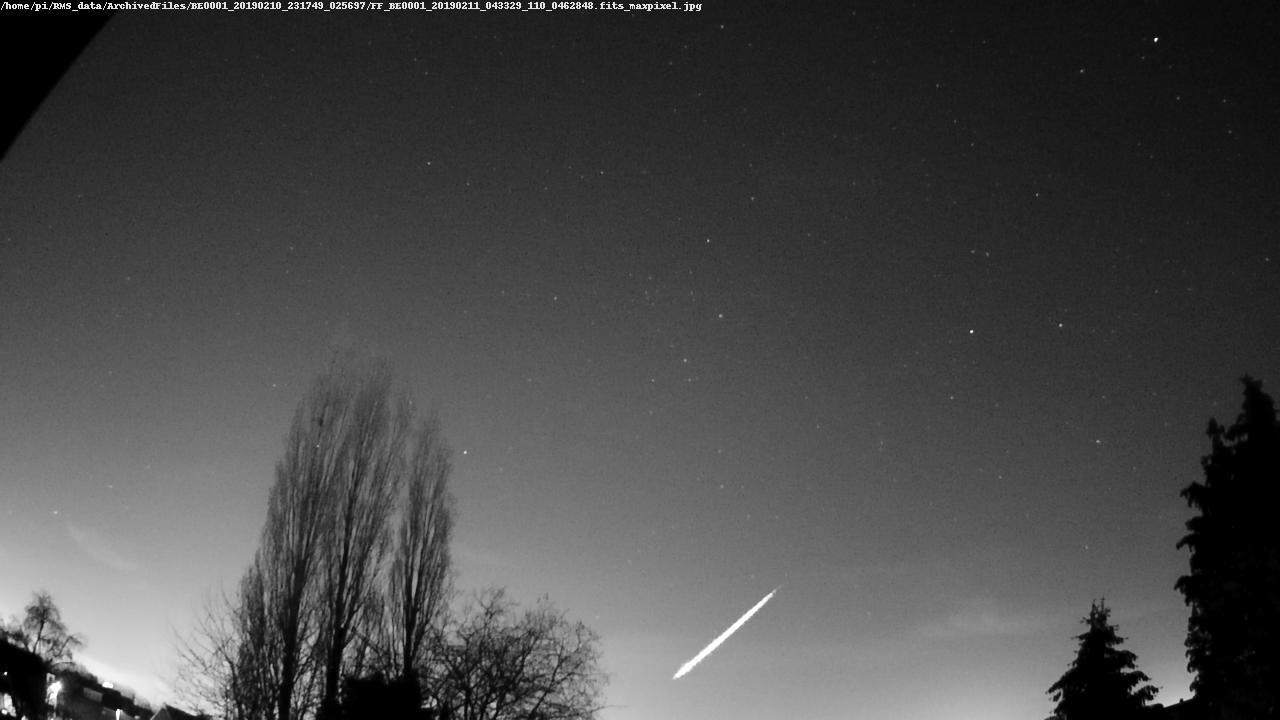 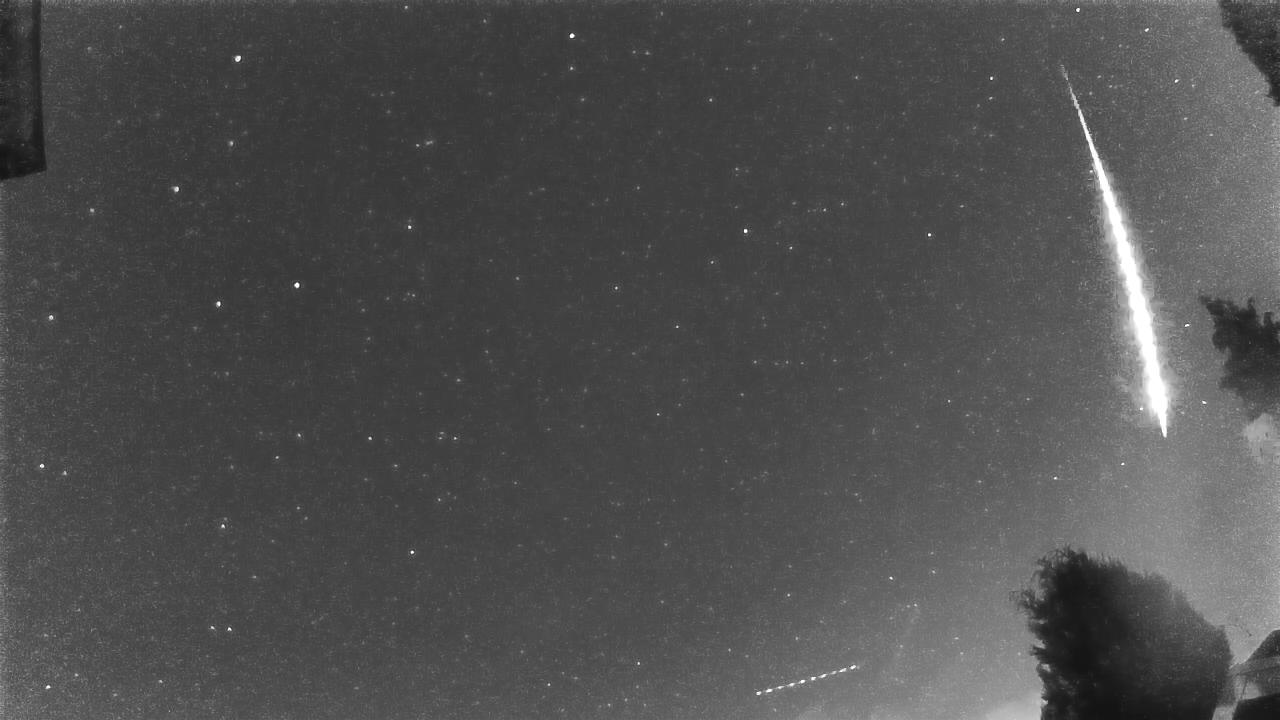 May be some source may be active as minor shower at this position. This may be a nice target for a minor shower case study on the large datasets of meteor orbits available, if we can find the time for this.

The Global Meteor Network’s goal is to have a yearly average of 1000 orbits per night. To achieve this there are still some hundreds of extra cameras required spread across our planet. A project like this is a life time project comparable to missions to explore the outer regions of our Solar System, but nevertheless just concerns our own planet. The dust and bigger fragments that bomb our atmosphere causing shooting stars, dropping meteorites and hurting our dear planet with craters, needs monitoring.

The modest contribution of the authors is to run our cameras. The BE0001 will be moved to the south-east of Belgium near the French-Luxembourg border under perfect dark skies. A new GMN camera will be installed in Mechelen to be directed at optimal overlap with NL0008 and DE0001.

If there are other RPI users in France, Germany or the UK who want to join us, please contact us.

We would also like to encourage other stations to find a partner for data collection. Multiple station work has so much more to offer. It is worth it! Never before amateurs had such an opportunity to make their contribution to the understanding of the dust in our Solar System, the remnants of disintegrated comets that our ancestors failed to detect, famous known comets and yet to discover comets, but also all these near-Earth objects that dump debris into an orbit that sooner or later hits our planet.

There is so much to discover, to verify and to document, if you feel like ready to make a real contribution, then join us and set-up your meteor video camera!