Weather offered very good observing conditions around the traditional Lyrid maximum. More than 2500 orbits were collected in 29 (partial) clear nights. 322 orbits could be identified as members of the Lyrid stream. The drift in R.A. was +0.92 degrees per day and –0.22 degrees per day in declination, based upon the 149 Lyrid orbits fulfilling the similarity criterium of Drummond with D < 0.04 obtained in the period between April 18–19 and April 23–24.

The month of April was extremely sunny. In De Bilt it was even the fourth-sunniest April month since 1901. No surprise that many orbits could be added by our network during almost all the April nights.

The nights around the traditional Lyrids maximum were mostly clear, which resulted in a nice collection of Lyrid orbits.

Only the night of 5–6 April remained without multiple station meteors during the. month of April. In total more than 2500 orbits were recorded by our network, again a new record for this spring month. The nights in the period 18 to 23 April in particular were very clear.

Therefore, it is no surprise that most multistation meteors were captured in the nights around the Lyrid maximum. In Figure 1 we see the radiant positions for all the orbits obtained in the period from 15–16 to 23–24 April. The large concentration around R.A. = 270 and decl. = +30 degrees, already indicates the Lyrids. 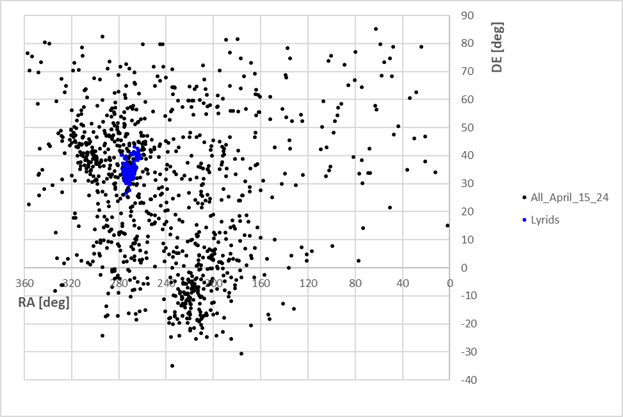 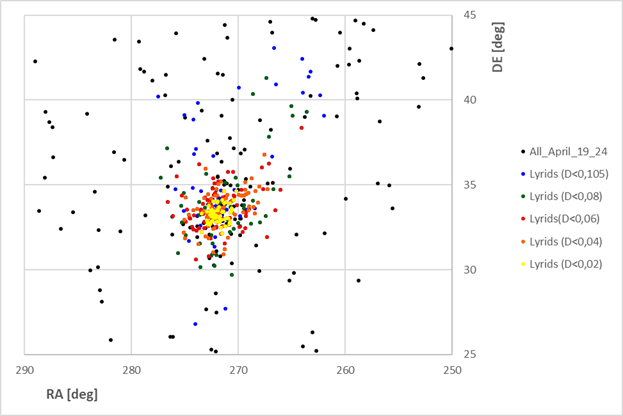 Figure 2 – The area of the Lyrid radiant with sporadic meteors (black) and Lyrids split into different steps of the Drummond criterion.

For the 149 Lyrid orbits with the discrimination criterion DD < 0.04, the median of the radiant position and of the orbital elements was determined. The results are listed in Table 1. The results are compared with the values published by Jenniskens (2018).

Table 1 – Median values for the radiant position and the orbital elements for 149 Lyrids with DD < 0.04 determined by CAMS BeNeLux compared with Jenniskens (2018).

The similarities are good. Of course, it must be kept in mind that we have only used data from our network, so we have only taken “snapshots” from the entire activity period.

Figure 4 shows for each of the nights 15–16 to 23–24 April the percentage of Lyrids from the above set in relation to the number of other meteors from the same night. We see a nice activity profile, which, just like in 2018, corresponds well with the known profile with a maximum activity around solar longitude of 32 degrees. 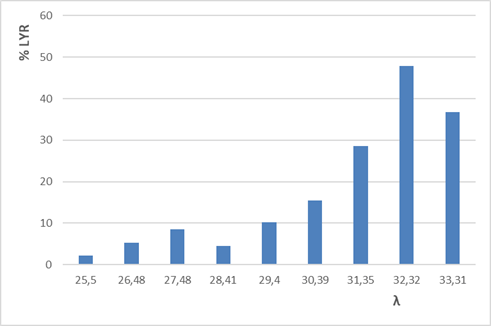