A summary of the activity of the CAMS BeNeLux network during the month of May 2019 is presented. 1825 orbits were collected during 29 nights with a maximum of 84 operational cameras at 20 different CAMS stations.

The first weeks of May offer nice levels of meteor activity with the eta Aquariids in the early morning hours. The last couple of weeks get shorter nights while the meteor activity decreases to the lowest level of the year. With short nights, low activity and often poor weather this time of the year remains a challenge to collect orbits.

May 2019 was a reasonably good month although the first week with the Eta Aquariids activity had less luck with the weather. As many as 7 nights resulted in 100 or more orbits, not bad at all considering the limited number of dark hours at the BeNeLux latitudes this month. Only two nights remained without any orbits.

The statistics for May 2019 are compared in Table 1 with all previous months of May since the start of the CAMS BeNeLux network. The maximum number of operational cameras remained stable at 84 but the number of cameras that remained operational all nights with AutoCAMS dropped from 64 in May 2018 to 53 in May 2019, also the average number of operational cameras decreased a bit. As many as 5886 of the detected meteors proved multiple station, good for 1825 orbits. This is still a very nice result although less than what the record month of May in 2018 offered with exceptional favorable weather.

A new RMS camera of the Global Meteor Network had been installed in Grapfontaine, Belgium and when all technical issues got solved, the camera got fully operational from May 15 onwards. The larger field of view combined with a much higher resolution results in 3.8 arc/pixel against 2.8 arc/pixel for an ordinary Watec camera with a 1.2/12mm lens. Pointed low to the NNW, this single camera intersects with as many as 62 other cameras at many other stations. The yield in multiple station meteors is impressive, outnumbering all other cameras except for the 003830 in Mechelen, also an RMS camera.

Since the start of CAMS BeNeLux 175 nights in May allowed to collect as many as 7677 orbits in May. 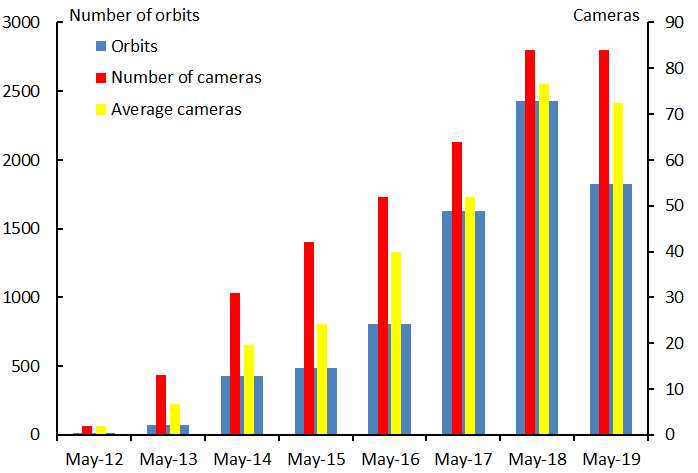 Figure 1 shows the decline in average operational cameras compared to 2018. The multiple station coverage of the atmosphere was slightly worse than in 2018 due to the loss of the CAMS station at Ooltgenplaat where 8 cameras were used 7/7 with AutoCams.