A summary of the activity of the CAMS BeNeLux network during the month of June 2019 is presented. The month was characterized by many clear nights and in general very favorable circumstances. 7817 multiple station meteors were captured which allowed to calculate 2457 orbits which is a new record for the month of June.

The shortest nights of the year are a challenge to collect orbits at the latitudes of the CAMS BeNeLux network, also because the overall meteor activity is about at its minimum level first weeks of June. Would 2019 offer us a better month of June than previous years?

June is the most difficult month for CAMS BeNeLux because of the short observing window of barely 5 hours dark sky each night. June 2019 brought better weather conditions than usually this time of the year. Only two nights remained without any double station meteors. As many as 13 nights resulted in more than 100 orbits in spite of the short duration of these nights, two nights got over 200 orbits each! The statistics for June 2019 are compared in Figure 1 and Table 1 with the same month in previous years since the start of CAMS BeNeLux in 2012.

This month it is one year ago that a disaster ruined the CAMS station of Piet Neels at Ooltgenplaat, the Netherlands. A great personal loss for Piet but also a huge drawback for the entire CAMS BeNeLux network. The role of Ooltgenplaat in the network became obvious once the station ceased functioning. Large areas covered by the CAMS BeNeLux network suddenly suffered poor coverage especially below 90 km altitude in the atmosphere over the western and southern areas of the network. Ooltgenplaat had 8 cameras functioning 7/7 with AutoCams. While all CAMS stations in Belgium operate 7/7 with AutoCams, Ooltgenplaat was the only station North of Belgium which provided 7/7 coverage on most of the southern part of the network. The impact of the reduced coverage has been masked by the overall better than usual observing circumstances. The loss of Ooltgenplaat illustrates well what a difference that 7/7 AutoCams makes for a meteor camera network. 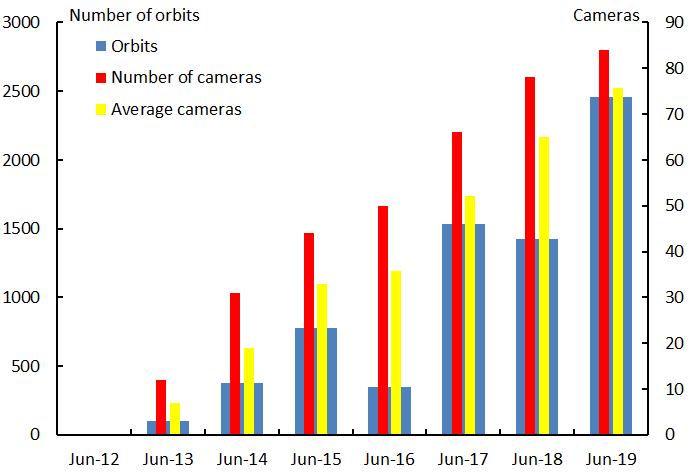 Compared to one year ago less technical failures occurred keeping more cameras operational. During the best nights up to 84 cameras were operational (78 in June 2018). Thanks to AutoCAMS at least 63 cameras were all nights operational (52 in June 2018). On average 90% of the available cameras were active. One issue remains a problem at some stations: shuttered meteors caused by an interruption with dropped frames that make the duration uncertain and affects the velocity determination making the registration unusable for orbit determination. The ratio of multiple station coincidences depends on the number of stations with clear sky during the same time span. The more stable the weather conditions are network wide and the less technical problems, the better the chances to catch a meteor from at least two stations.

Two RMS cameras produced the best scores in terms of orbits of all cameras in the CAMS BeNeLux network. There is no competition to nominate any most successful camera in the network, but in this case, it is interesting to see how the RMS performs compared to the Watecs. Certain cameras are pointed at regions where the chances for multiple station events is simply significant less, for instance towards the borders of the camera network coverage. However, to illustrate the order of difference for these RMS cameras, it is necessary to compare these numbers with what the most successful Watecs obtained.

Table 2 – The ten cameras of the CAMS BeNeLux network with the best score in terms of orbits during June 2019.

June 2019 was the best month of June ever in the 8 years since 2012. The total number of orbits for the month of June rose to 7023 in 159 June nights that allowed to collect orbits. This way the month of March becomes the poorest covered month of the year for CAMS BeNeLux with ‘only’ 6308 orbits collected during 162 usable nights since 2012. 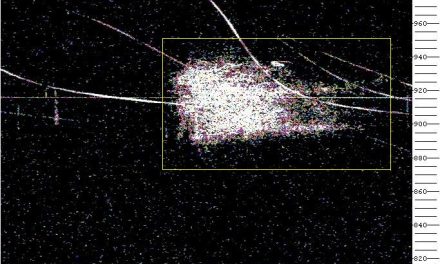