Introduction
In 2019 most of the maxima of many meteor showers will suffer from moonlight. This was not different for the Lyrids. A Full Moon on April 19 meant moonlight all night long around the Lyrid maximum. Because the maximum was over the Easter weekend and despite the Moon, I decided to do observations during two nights: 21/22 and 22/23 April.
According to IMO, the maximum was expected around λʘ 32.32, which corresponds to the date of April 23, 2019 just after 00:00 UT (02:00 hour local time). That is a good thing, because fairly soon after the maximum some brighter Lyrids appear. Therefore, also the choice for 21/22 and 22/23 April, this to see the difference between these two nights (the weak Lyrids versus the bright Lyrids).
I decided to observe from the meteor roof of my dormer. The advantage there is that the Moon (which is low in the south around Full Moon during this time of the year) remains hidden behind the eaves. In addition, a bike ride to the nearby Groevenbeekse Heide (a heath) will not lead to a darker sky just because of the Moon.

April 21/22, 2019
A start was made under a moonlit sky at 0h09m UT. The brightest stars of the constellation Ursa Minor were clearly visible and in star count area 1 I got no further than 10 stars (lm 5.25). The sky background was quite bright, SQM 18.98 and this remained so the whole session. Unfortunately, there was little to be seen, so little that I stopped after 90 minutes. In those 90 minutes I counted 4 Lyrids and 3 sporadic meteors. Only weak meteors as expected, the brightest meteor was a +2 Lyrid in the “Big Dipper”.

April 22/23, 2019
A clear night was predicted by the Dutch meteorological institute KNMI, but with occasional fields of cirrus passing by: deadly for observations in combination with moonlight. An alarm clock was set at 23h35m UT just in case…. A look outside: bright clear skies but also some patches of cirrus. A glance at SAT24: Ok, after an hour the cirrus might disappear temporarily. I decide to go outside despite the cirrus.
Start of observations at 23h57m UT. I worked in 15-minute count periods and determine every period the limiting magnitude, SQM and if necessary the cloud percentage.

Period 00h27m-00h42m UT, Lm 5.49, t.eff. 0.25 hours, F 1.15
Yes activity was increasing! Some beautiful meteors in this quarter! The first one appeared at 00:33 UT (in the corner of my field of view): a beautiful magnitude -2 meteor that appeared to come from the Lyrid radiant and shot through Cygnus. However, I almost immediately doubted whether this could be a Lyrid. The meteor seemed a bit too slow and started almost in the Lyrid radiant. I therefore classified it as a sporadic meteor and that turned out to be the right choice: the CAMS BeNeLux network also recorded this meteor and indeed it turned out to be a sporadic meteor. 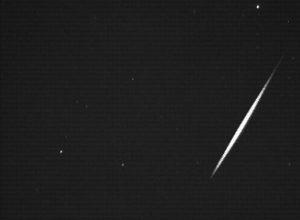 Shortly after this meteor a beautiful long blue +2 sporadic meteor appeared moving from Draco to Cygnus with a short persistent train. At 00h41m I saw something bright in the corner of my eye: a -4 Lyrid near Arcturus! Well, that was quite an underestimate: the all sky recording showed a -6 Lyride. A -3 Lyride was also recorded on the same recording: WOW! I had not seen the latter visually. Sometimes it happens to me that I estimate meteors that appear in the edge of my field of view too conservative… So, in total I counted 2 Lyrids and 2 sporadic meteors this quarter. 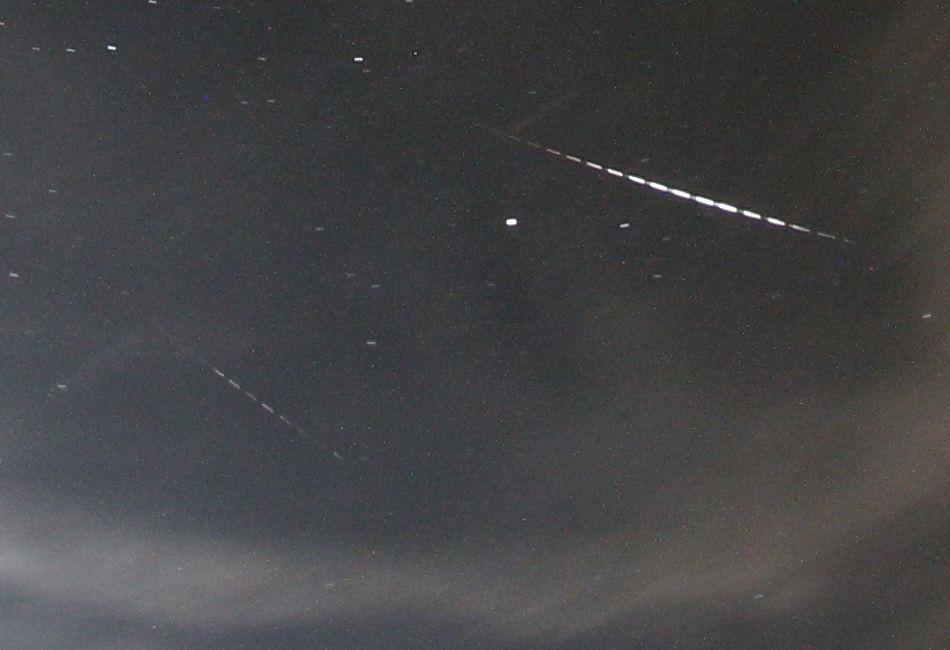 Period 01h12m-01h27m UT, Lm 5.72, t.eff. 0.25 hours, F 1.15
The sky was now improving visibly, only a band with cirrus was slowly moving from south to north through my field of view, but beyond that the limiting magnitude was getting better. No less than 5 Lyrids were seen in this period: respectively magnitudes +4, +3, +1, +2 and +1. Some of these were also recorded by CAMS. In addition to these 5 Lyrids, a sporadic meteor was also seen, so a total of 6 meteors during this quarter. 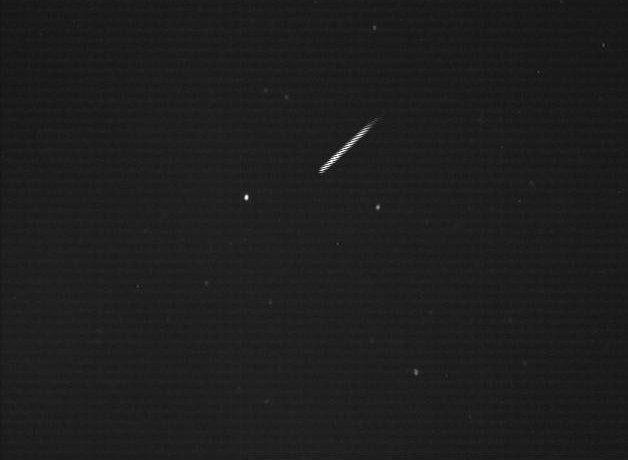 Figure 4. CAMS 354 camera captured this bright Lyrid in the constellation of Cygnus.

Period 02h12m-02h27m UT, Lm 5.66, t.eff. 0.25 hours, F 1.00
The first signs of twilight were visible in the east. Unfortunately, this would be my last fifteen minute count, because I had to go to work very soon. 4 Lyrids were seen: a nice -1 at 02h18m UT and a +1 at 02h26m UT. The CAMS observations showed that a -2 and a -4 Lyrid appeared quite soon after the visual observations were stopped ….
All in all, a very nice session. Observing with moonlight can be fun when you look at the right moment! The atmosphere in such a night is also completely different from a moonless night. The all sky camera captured 5 meteors that night, 4 Lyrids and 1 sporadic meteor. 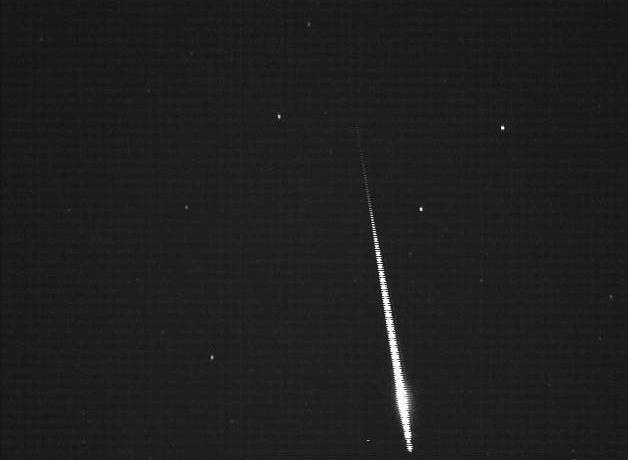