Abstract: A case study was dedicated to the earlier discovered fireball shower, the December alpha Aurigids, listed in the IAU working list of meteor showers as DAR#258. A first search to establish the range in time, radiant and velocity resulted in a very unlikely wide range in time and radiant area. Further tests made it understood that the discrimination criteria associated mainly sporadic and other shower orbits. A second search within a narrower range in time, radiant and velocity resulted in a dataset of possible December alpha Aurigids orbits representing very weak activity and a diffuse radiant with no indication for any periodicity and no dominant presence of fireballs or bright meteors. There is no conclusive evidence for the existence of this shower.

Terentjeva (1990) analyzed fireball orbits and defined 78 fireball streams. A similar search was made on over 1000 photographic orbits with meteors brighter than magnitude –3 (Porubčan and Gavajdová, 1994). One of the showers that were identified in both studies were the December alpha Aurigids (DAR#258). The orbital data has been listed in Table 1.

On December 12–13, 1996, Russian observers witnessed a meteor outburst from a radiant at αg = 78.8° and δg = +43°. A possible association with the December alpha Aurigids (DAR#258) was suggested (Terentjeva, 1998). However, checking through CAMS orbit data of recent years, the DAR#258 meteor stream remains remarkable absent. On request of Dr. A.K. Terentjeva, I made a search for this stream based on our orbit dataset.

We have the following orbit data collected over 12 years, status as until July 2019, available for our search:

In total 712489 video meteor orbits are publicly available. Our methodology to detect associated orbits has been explained in a previous case study (Roggemans et al., 2019).

To locate the position where December alpha Aurigids can be found we take the orbital elements given by Porubčan and Gavajdová (1994) as reference (see Table 1).

The D-criteria that we use are these of Southworth and Hawkins (1963), Drummond (1981) and Jopek (1993) combined. We define five different classes with specific threshold levels of similarity:

This first test results in as many as 1867 orbits that fulfil the low threshold criteria class with DD < 0.105. Unfortunately, the spread on the orbits is too large to represent a realistic range where December alpha Aurigids may be found:

Most of these orbits are sporadics or were previously classified belonging to other meteor streams. The similarity criteria indicate only a degree of geometric similarity. Using for instance a single discrimination criterion with a low threshold will almost certainly result in pure chance orbit associations that physically have absolutely nothing in common.

Also, the medium low and medium high threshold criteria are too weak to detect a reasonable compact shower. The type of orbit in this region near the ecliptic with a large concentration of sporadic meteoroids with similar orbits makes it rather tricky to define any average orbits based on D-criteria only. To limit the contamination with pure chance similar orbits, the range found for the high threshold similarity class (DD < 0.04) of the preliminary search is taken to make a selection of orbits in which December alpha Aurigids orbits can be found, adding 3° in solar longitude extra margin at either side of the activity interval:

In total we have 92368 of the 712489 orbits in this time interval and only 139 fit with the limits set for radiant area and velocity range. After 3 iteration an average orbit is found for 134 orbits. Table 2 lists the averaged orbit for each threshold level. The high threshold class has the most representative orbit. 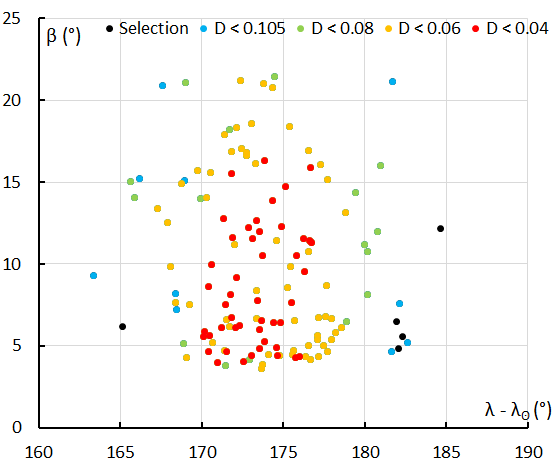 Plotting the ecliptic latitude β against the Sun centered longitude λ – λʘ neutralizes the radiant drift due to the movement of the Earth around the Sun. The resulting radiant distribution is rather diffuse and there is no indication of any concentration in Figure 1. The same image appears in the plot of inclination against the length of perihelion Π (Figure 2), no real concentration of orbits is displayed.

Table 2 – The average orbits for the four different threshold levels of the D-criteria obtained for the DAR#258 meteor stream. 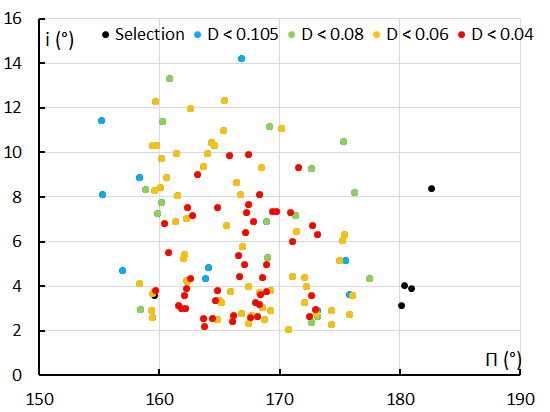 Figure 2 – The plot of inclination i (°) against the length of perihelion П (°) for the 139 selected possible DAR-orbits. The colors mark the different threshold levels of the D-criteria for the reference orbit listed in Table 2.

The December alpha Aurigids were discovered using fireball orbits, meteors brighter than magnitude –3. Looking at our sample of similar orbits, there is no indication for any dominant presence of bright meteors, the brightest having MagAbs = –4.5, the faintest MagAbs = +3.0, with an average of MagAbs = –0.2 and only 7 cases brighter than MagAbs –3.0. This is nothing like a fireball stream.

The previously identified fireball stream (Porubčan and Gavajdová, 1994) was found from a much smaller dataset with photographic orbits of meteors. It is strange that our much bigger dataset of video meteor orbits obtained during a period of 12 years does not confirm this. It is not clear how the photographic meteor orbits were identified as possible DAR#258 orbits, unless that a stream search was used based on the Southworth-Hawkins D discriminant only. This could explain the discrepancy in both results. These short period orbits close to the ecliptic are part of a very rich dust population. The initial attempt to detect the range to search for possible DAR#258 orbits using three different discrimination criteria combined resulted in a huge number of orbits that all fulfilled the discrimination criteria, with a huge radiant area with a northern and southern branch either side of the ecliptic. This sample included orbits that were previously identified as late Taurids and associated meteor showers and even Geminids. The explanation is very simple that the D-criteria indicate the similarity between orbits but prove no physical relationship. Short period orbits such as the DAR#258 orbit are very tricky when analyzed by D criteria.

If previous stream searches were based on the Southworth-Hawkins criteria only, it is very likely that relationships were assumed between unrelated orbits, perhaps including orbits that could also be successfully identified as Geminids, Taurids or associated showers. The question remains if it was checked that the D criterion used could also result in a positive match with other better-established meteor streams?

In order to minimize the risk of pure chance orbit association we limited the range on our selection in time, radiant position and velocity speed. The resulting sample of possible DAR#258 orbits is rather small and diffuse and leaves the doubt whether or not this sufficiently proves that this shower exists? Are there enough similar but unrelated sporadic orbits that could explain the discovery of this shower?

The orbits we identified as DAR#258 orbits were sampled in all years between 2007 and 2018, there is no indication for any periodicity. The outburst mentioned in 1996 happened near the Geminid maximum. We find no indication that this could be related to the DAR#258 shower like identified in the IAU Shower list.

This case study did not result in any conclusive evidence for the existence of the DAR#258 meteor shower. This type of short period orbits near the ecliptic is problematic to make shower associations using similarity discrimination criteria. Too optimistic assumptions to interpret orbit associations based on these D-criteria may result in selections of similar orbits by pure chance and risk to end up with spurious meteor showers.

The author is very grateful to Jakub Koukal for updating the dataset of EDMOND, to SonotaCo Network (Simultaneously Observed Meteor Data Sets SNM2007–SNM2018), to CAMS (2010–2013) and to all camera operators involved in these camera networks. 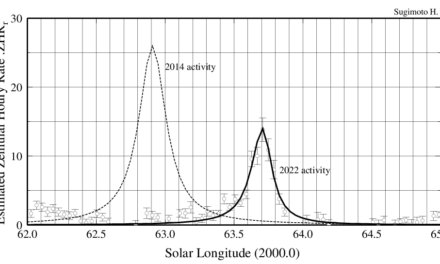