Abstract: A summary of the activity of the CAMS BeNeLux network during the month of September 2019 is presented. September 2019 counted many clear nights. 30389 meteors were recorded,14826 of which proved multiple station, or 49%. A total of 4609 orbits were collected during this month.

In general September tends to be a very favorable month for meteor observations with a rich activity although no major showers are active this month. The only uncertainty remains the weather which has been favorable in recent years during this month. What would September 2019 bring?

CAMS BeNeLux collected 30389 meteors of which 14826 or 49% were multi-station, good for 4609 orbits. This is about 20% less than previous year. This month counted as many as 15 nights with more than 100 orbits. The best September night was 20–21 with as many as 456 orbits in a single night. Only one night remained without any orbits. The statistics of September 2019 are compared in Figure 1 and Table 1 with the same month in previous years since the start of CAMS BeNeLux in 2012. In 8 years, 209 September nights allowed to obtain orbits with a grand total of 24013 orbits collected during September during all these years together.

The weather was very favorable and September 2019 allowed to register more than 1000 meteors extra compared to September 2018. However, the return in number of orbits was finally almost 1000 orbits less than what we got during the 2018 record month for September. The northern part of the CAMS BeNeLux network suffered less good coverage as some of the CAMS stations were temporarily inactive or unable to contribute for various reasons. While the first three weeks of September had favorable weather, from September 22 onwards the BeNeLux got rather very poor weather circumstances.

The volume of atmosphere monitored by the CAMS BeNeLux cameras is huge. If all or most cameras are kept operational, most of the meteors registered will help to obtain an orbit. However as soon as several cameras, or some stations drop out for whatever reason, the remaining cameras have less chance to get multi-station results. The difference in number of orbits between 2019 compared to 2018 shows how much the success of a camera network depends on a common effort by the different stations. 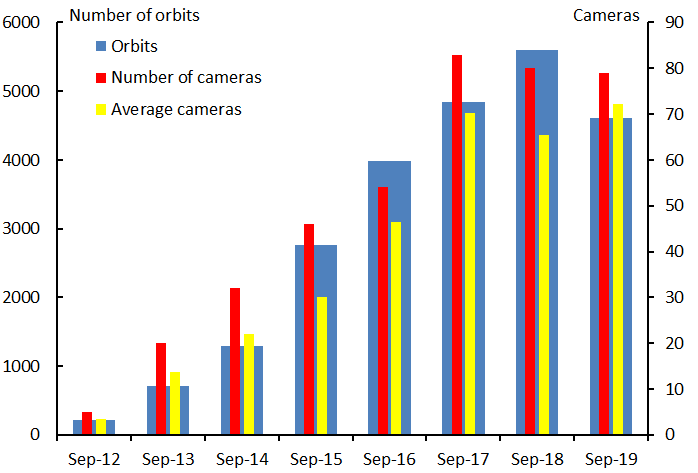 September 2019 confirmed the reputation of this month with a very rich background meteor activity and favorable weather. The smaller number of orbits compared to September 2018 can be explained by the fact that a few camera stations were not available for different reasons.

Many thanks to all participants in the CAMS BeNeLux network for their dedicated efforts. Thanks to Martin Breukers for providing all the data on which this report is based. The CAMS BeNeLux team was operated by the following volunteers during the month of September 2019: