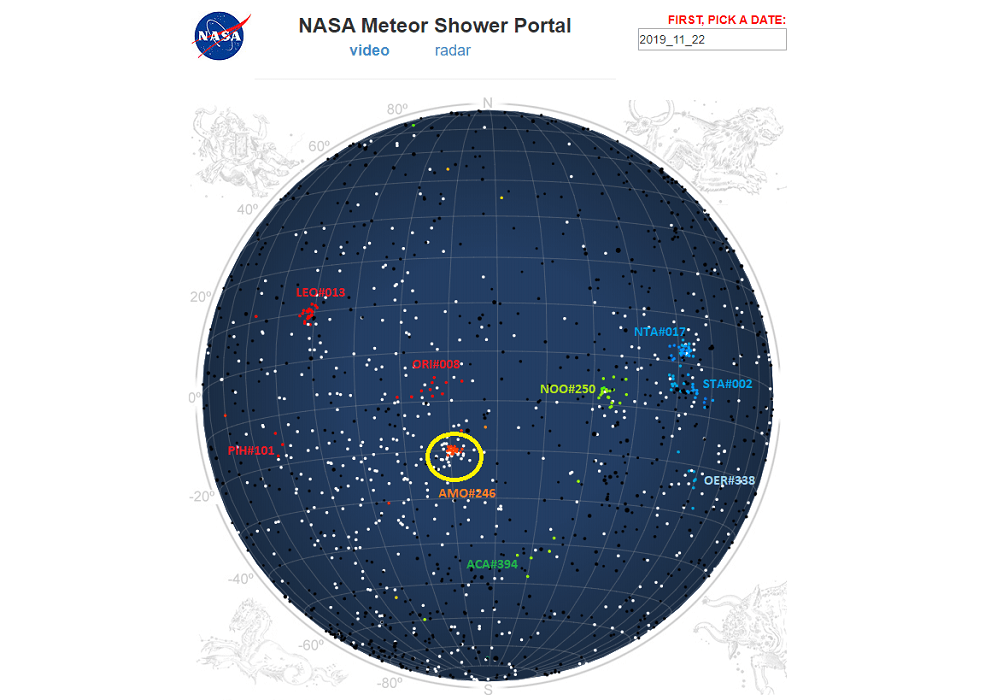 Abstract: The predicted alpha Monocerotids outburst did materialize. Although early visual and radio reports indicated only ‘some’ weak activity, several video cameras under good sky conditions recorded a significant number of alpha Monocerotids in a short time interval, exactly as predicted by Peter Jenniskens and Esko Lyytinen. Although the level of activity cannot be compared to the 1995 return and definitely no meteor storm took place like announced in some sensation media,  CAMS leading scientist Peter Jenniskens concludes that this was not just ‘some activity’ but a real shower outburst. The outburst is also clearly shown by the results of the Global Meteor Network coordinated by Denis Vida. The lack of bright meteors explains why visual observers saw very few AMO-meteors, especially where a low elevation of the radiant, moonlight and twilight hampered observations.

Predictions suggested a fair chance to observe a short-lived outburst of the alpha Monocerotids in the morning of the night 2019 November 21–22. Any activity was expected to be centered around 4h50m UT and the duration of the event would be limited to 15 up to 40 minutes maximum. Read also https://www.meteornews.net/2019/11/06/likely-alpha-monocerotids-amo246-outburst-on-the-morning-of-november-22-2019/.

The predictions got wide attention in the media worldwide. Some journalists did not pay attention to the details in the original publication and announced a spectacular meteor storm with 1000+ of shooting stars to be seen while no scientist ever predicted such spectacular event. Even if a strong outburst would have occurred, the actual numbers of meteors seen would not be so impressive because of the very short duration of the Earth transit through the dust trail. For a majority of casual watchers with poor sky conditions, light pollution, moonlight and twilight, the number of meteors visible would be only a fraction of the actual number and certainly disappoint observers with too high expectations. The low radiant elevation at some location reduced the visible number of meteors to a fraction of what could be seen in perfect circumstances with the radiant at the zenith.

The reduction of the observational data is going on and will take several days or weeks to get done.

The most substantial report so far comes from Denis Vida:  “The Global Meteor Network stations in Croatia and Russia (perhaps elsewhere as well) saw many AMOs, but it definitely was not a meteor storm. The width of the shower was indeed very small. A short analysis results in the following graph (Figure 1), based on single-station data from La Palma (ES0002). From the time lapse it looks like Musk’s Starlink is becoming a serious problem.  AMO’s start around 4:30, and starlink sats start around 6:00 in this time lapse video.” 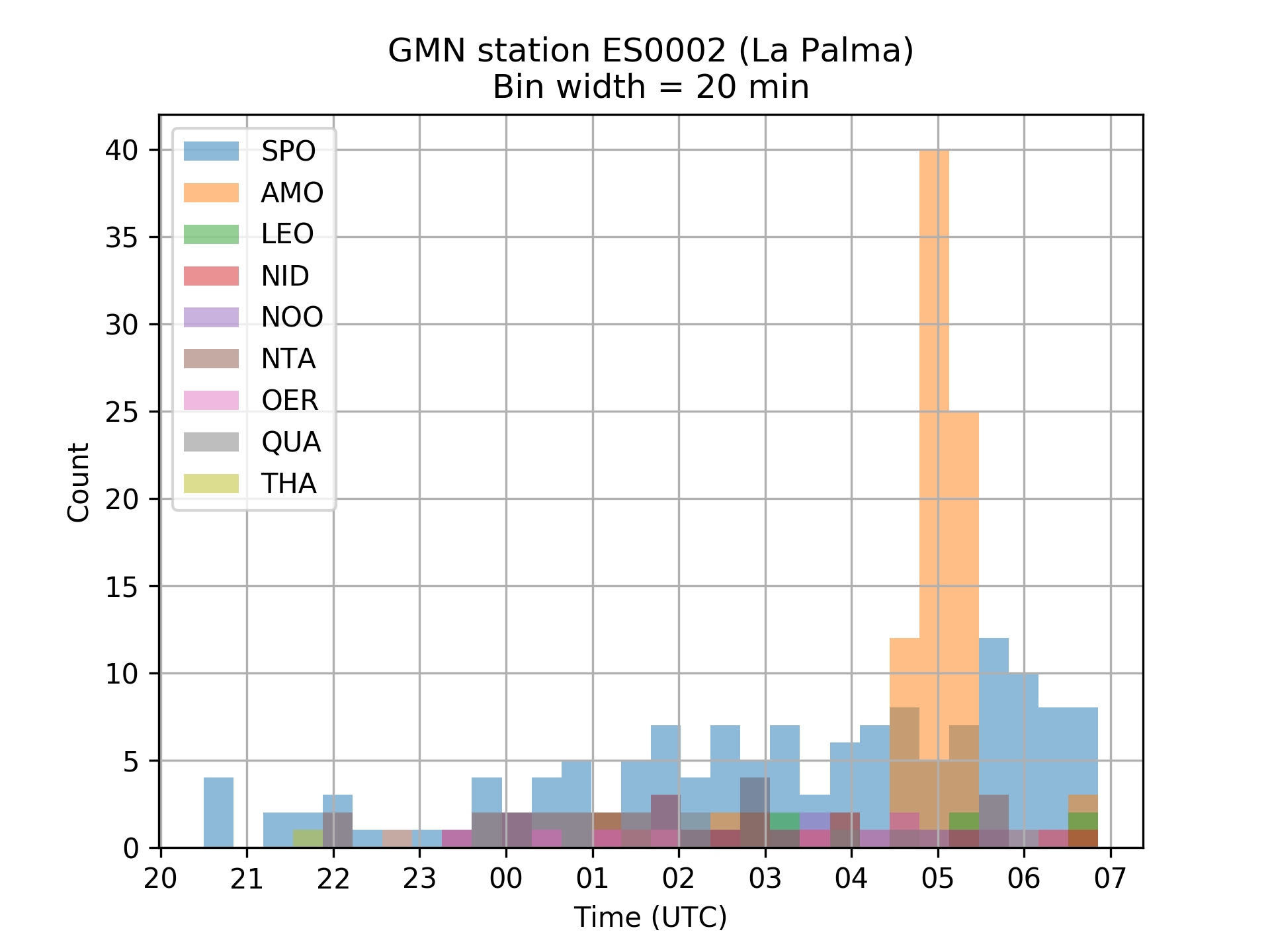 Meanwhile Denis Vida shared the preliminary orbits. Denis writes: “The shower meteors were fast and small, so there weren’t many data points per meteor. The average meteor duration was around 0.3 s, which translates to only 7 points per station at 25 FPS. This makes the trajectories quite uncertain, but a tight cluster of radiants with small uncertainties around Lg-Lsun = 239.8 and Bg = -20.25 can be seen on the radiant map (Figures 2, 3 and 4)”. 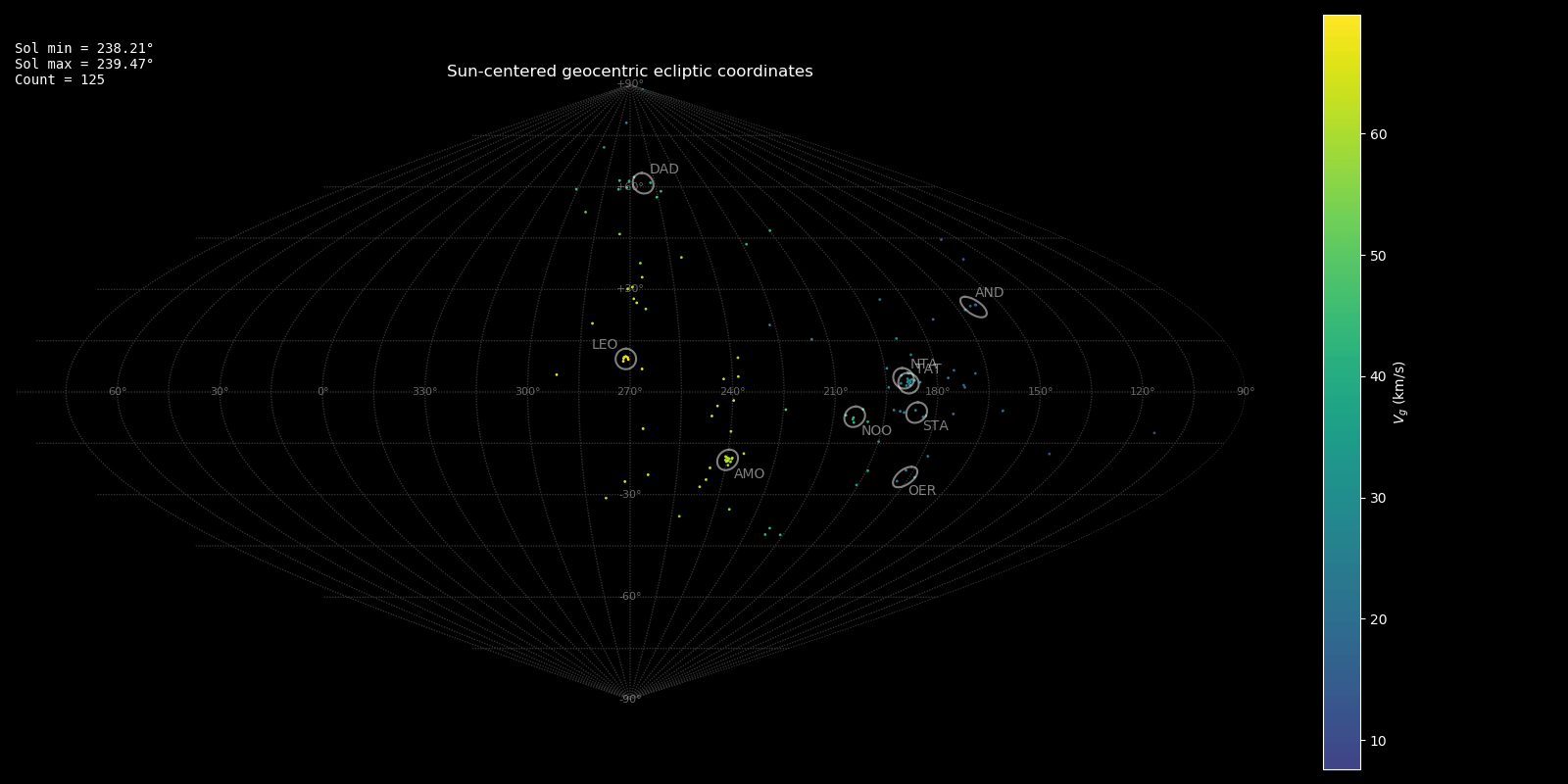 Figure 2 – The solar centered ecliptic coordinates in the s.l. range 238.0 to 240.0 with color gradiant in function of the geocentric velocity vg. 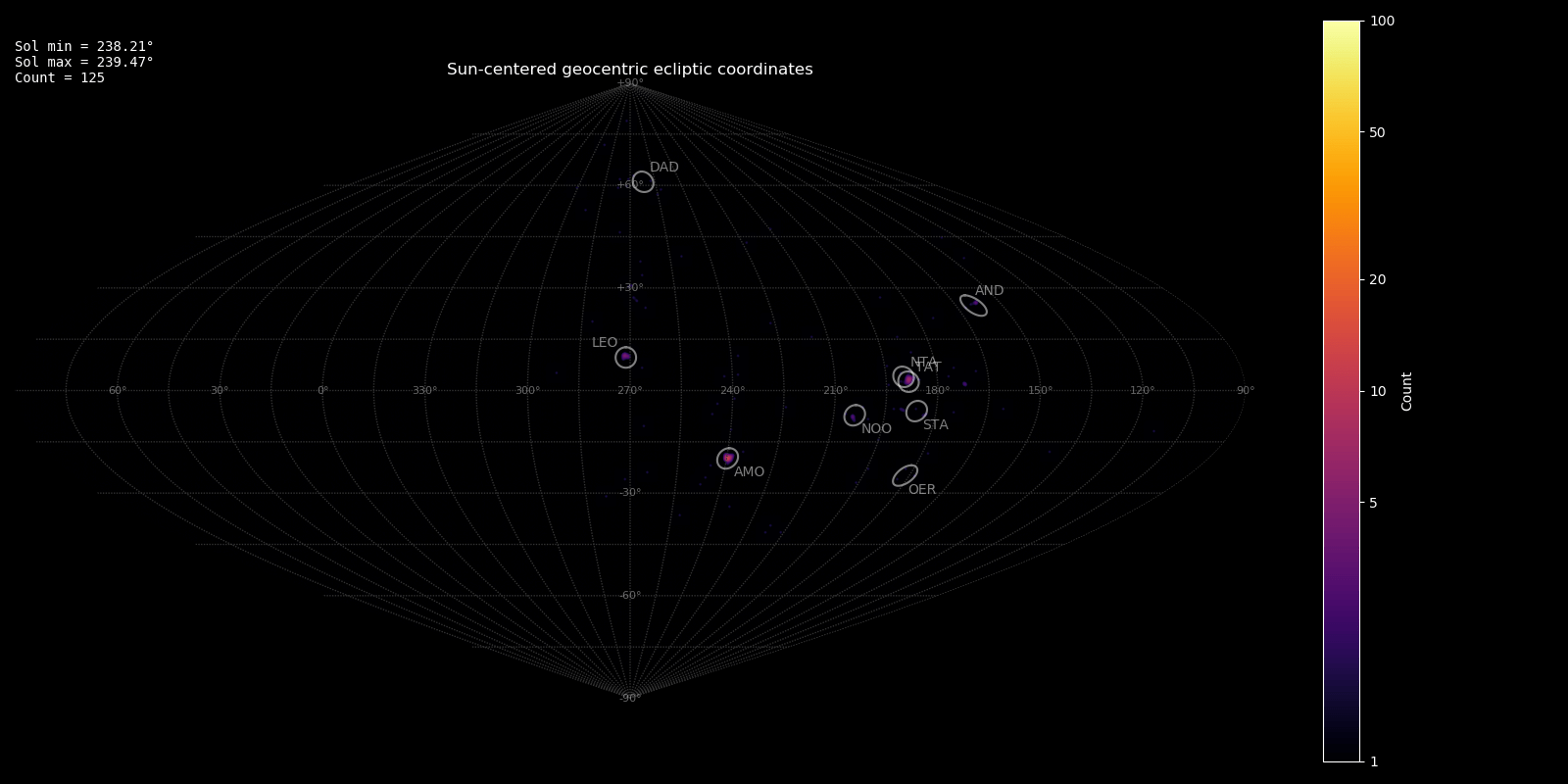 Figure 3 – The solar centered ecliptic coordinates in the s.l. range 238.0 to 240.0 with color gradiant in function of the density. 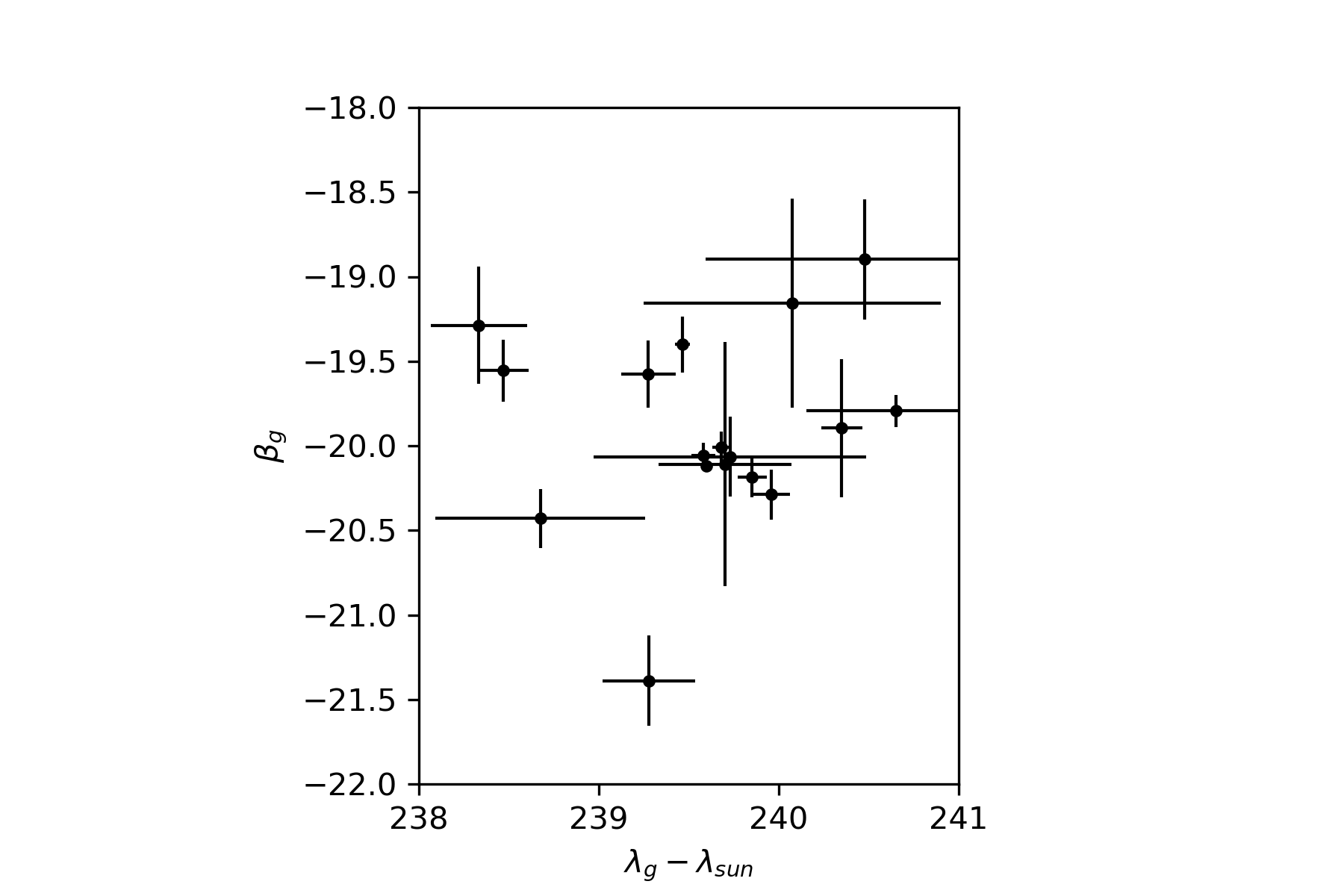 Figure 4 – The solar centered ecliptic coordinates in the s.l. range 238.0 to 240.0. Note the very compact nature of the radiant.

Peter Jenniskens (http://cams.seti.org/) reports that the alpha Monocerotids outbursts has been confirmed by the Brazilian CAMS-EXOSS network (Figure 5). Meanwhile, Chile recorded 20 and Florida 49 triangulated alpha Monocerotid orbits during the outburst, as well as some that were not so precisely measured and that are not captured by the lookup table (Jenniskens, 2019). Chile reported clouds in La Serena. Detected meteors were in +4 to +1 magnitude range, most +3 and +2. The shower clearly peaked in a short period. There was not just “activity”, it was clearly an outburst. 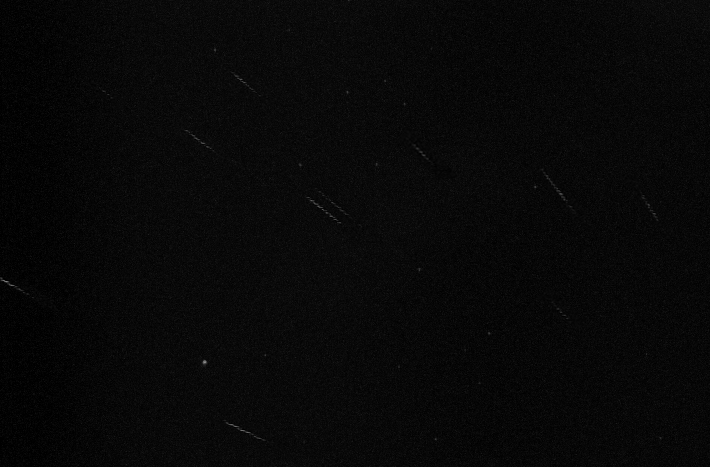 Figure 5 – A composite image, made by Peter Jenniskens, of alpha Monocerotids captured at one of the CAMS-EXOSS cameras (nr. 9999) in Brazil between 04:49 and 05:14 UTC, November 22, (Courtesy of Marcelo De Cicco).

The CAMS networks picked up some orbits that were identified as AMO#246 members in the night of November 21, the night before the expected enhanced activity. Figure 6 shows the position of the AMO#246 radiants, with some other active sources marked as well. This means that some dust of this shower got already well dispersed. Figure 7 displays the map of November 22 which includes the orbits captured during the outburst. 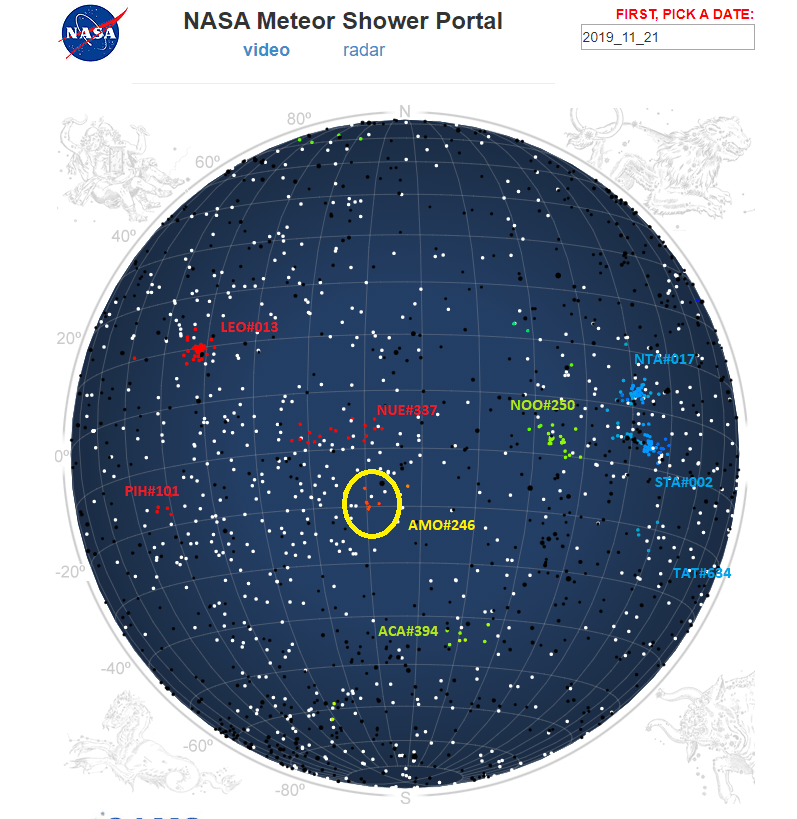 Figure 6 – The radiants of the orbits collected by the CAMS networks during the night before the predicted outburst, November 20-21. The alpha Monocerotids radiants are marked with a yellow circle. 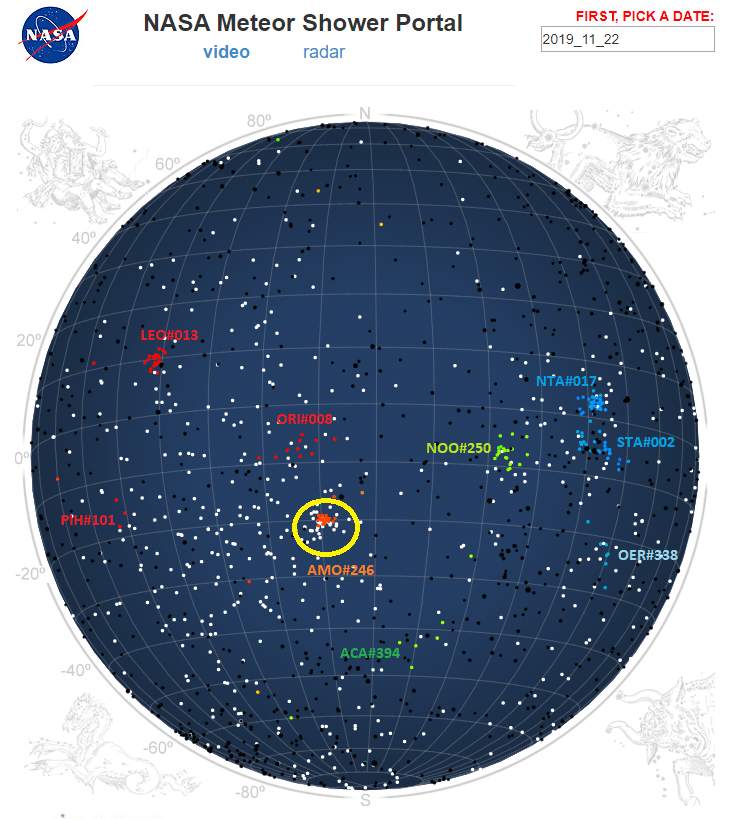 Figure 7 – The 46 radiants of the AMO#246 orbits collected by the CAMS networks during the predicted outburst, November 22. The alpha Monocerotids radiants are marked with a yellow circle.

J. Andreas (Andy) Howell reports: “CAMS-Florida collected coincidences of 49 meteors from the alpha Monocerotid meteor shower during the evening of Nov 21/22. The radiant was 35 degrees above the eastern horizon, and skies were mostly clear. Activity spanned the time interval 04:38 to 05:37 UT with a lone meteor from this shower detected later in the night at 07:55 UT. The mid-point of activity occurred at 05:02 UT on Nov 22. The majority of detected meteors were magnitude 1 or 2.  Figure 8 is a video composite from CAMS 5001 which is located in Gainesville, Florida. Figure 9 shows the time distribution of coincidences.” 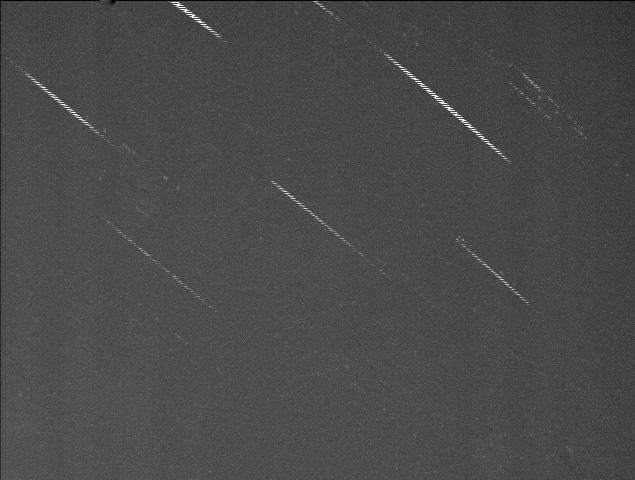 Tioga Gulon reported: “An overview of my registrations with a RMS camera installed in central France where the sky was very clear from 23h until 6h UTC. I recorded 25 meteors identified as AMO by my camera FR000A installed at Cerilly, France. 23 of my 25 AMO meteors appeared between 4h32m and 5h18m UTC. Figure 10 shows a stacked image of my 23 AMO meteors and Figure 11 displays a time distribution. 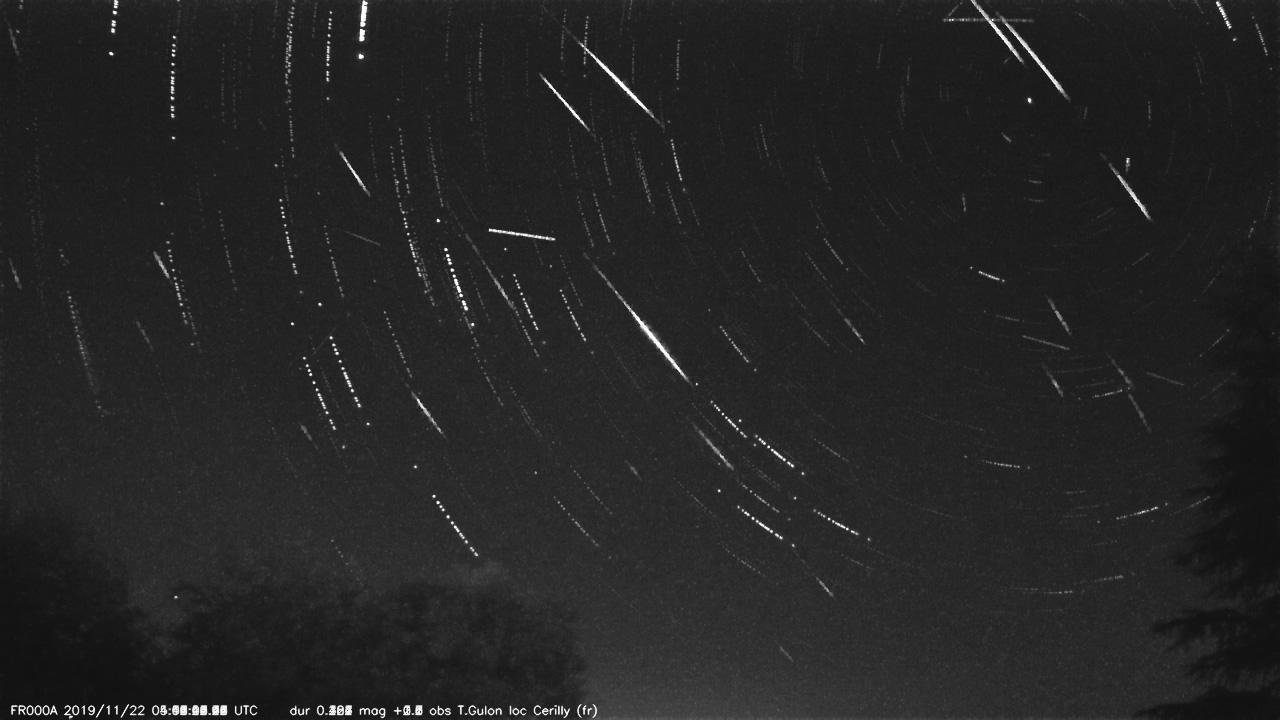 Figure 10 – A stack of the 23 AMO meteors captured by the RMS FR000A at Cerilly, France (courtesy: Tioga Gulon). 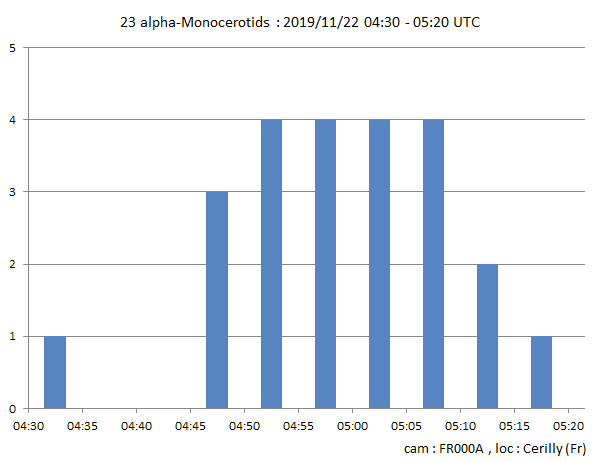 Figure 11 – Time distribution of the appearance of the AMO meteors.

Enrico Stomeo reports the observations he made during the night of 21-22 November with three cameras at his observatory near Venice. Unfortunately the sky was
almost always largely covered with clouds. It was totally cloudy when the peak of the alpha Monocerotids was supposed to happen. The observations were as follows:

John W. Briggs reports to the Global Meteor Network: “My family and I observed at FOAH Observatory (IAU code V23) near Magdalena, New Mexico, USA, for about 25 minutes through the maximum predicted for the alpha Monocerotids (i.e., centered on about 10:55 Mountain Time here in USA), and we saw two unusual meteors that I believe were associated with the shower.  Both were about 3rd magnitude and travelled on very long arcs rising up from low in our eastern sky — one of them travelling nearly to zenith.  Although we saw no meteor “storm” here, seeing these rather unusual meteors was well worth the effort!  We were lucky to have a clear sky briefly through this period after a very rainy day.” 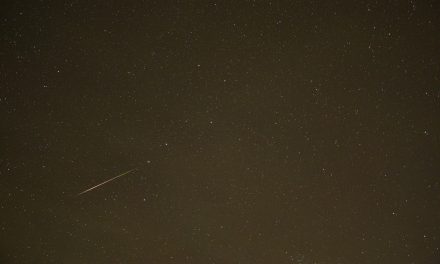 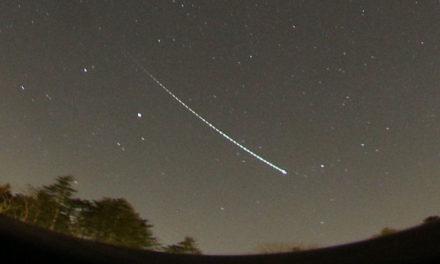