The Perseids 2019 from Ermelo, the Netherlands 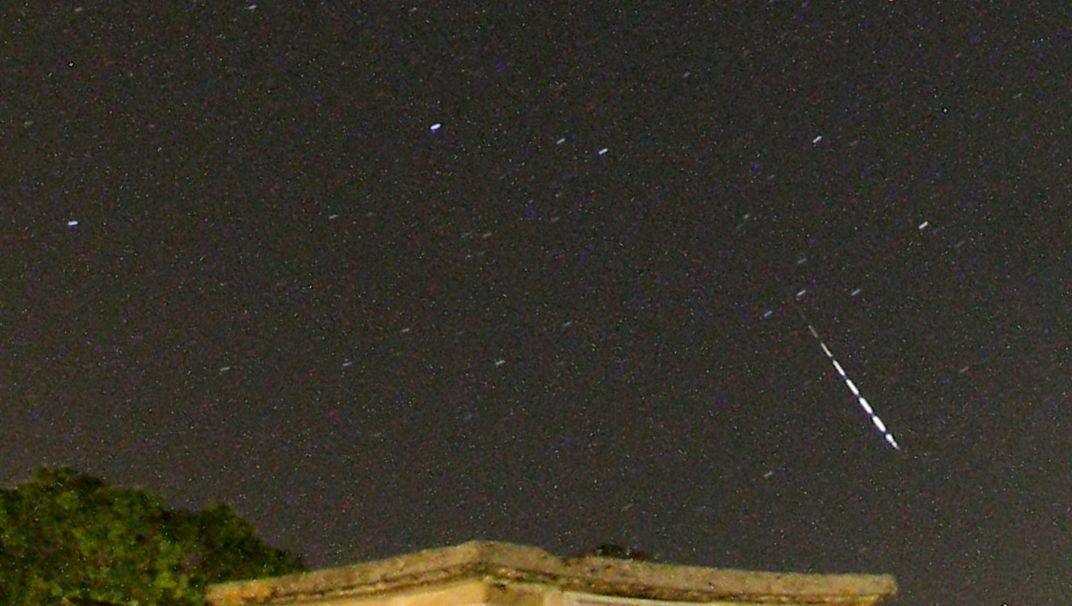 The Perseids of 2019 were very unfavorable in terms of moonlight. During the nights of 11/12 and 12/13 August, the moon would considerably disturb the observations with respectively a 2- and 1-hour period of moonless conditions in the late night. I regularly travel to southern locations such as France or Crete at the end of July and August to observe the southern delta Aquariids. For some reasons this year I was not able to go to southern locations and therefore I observed the Perseids from my home country.

29/30 July, 2019
A short session this night. The sky was very hazy and after an hour I stopped. In 1.067 hours, I only counted 7 meteors, including 1 Capricornid, 1 Perseid, 1 gamma Draconid and 4 sporadic meteors. All this with a limiting magnitude of 6.1 and SQM 20.11 .
At the end of July I got a surgical operation at my hand and started a long way of recovery and physio. As a result, I could not observe the first week of August. There were a number of clear nights during that period. The CAMS video cameras and all sky work continued. During the night of 8/9 August the all sky camera captured three meteors.

As time went by it turned out that there were chances for one or more clear nights in the period 10-14 August. Sky cleared on Saturday 10 August.

10/11 August 2019
After a walk to the Groevenbeek Heide (a heath), this session started at 23:10 UT. The sky was beautifully clear and transparent, but it was not a top sky. There was too much moisture in the atmosphere for that. The last hour some thin cirrus also appeared in the southeast, but it moved almost outside the field of vision to the east.
At the start of the observations, the Moon was still above the southwestern horizon. One hour later the Moon set. The observations started with a limiting magnitude of 5.9, which rose to 6.3 after moonset. I did 30-minute counts this session. The number of Perseids rose from 7 to 16 per half hour this night. So, I was enjoying myself with the Perseids and also the peace and surroundings. And there were also a couple of bright Perseids:
01:21 UT: -2 Perseid from the Pisces to Pegasus.
02:22 UT: -2 Perseid in Perseus
02:42 UT: a few seconds before the end of the watch, a nice -3 Perseid in the south was seen through the thin cirrus. A nice ending! Also a number of Perseids of -1 and 0 were also seen.
In total, this night provided 3.47 hours of effective observation time resulting in 81 Perseids, 2 southern delta Aquariids, 1 Capricornid, 1 kappa Cygnid, 4 Antihelions and 26 sporadic meteors. So, in total 115 meteors. A I have good feeling about this night.
CAMS recorded 249 meteors this night, the all sky camera captured nothing.

11/12 August 2019
During the day clouds came in again but in the course of the evening it cleared up completely again. The same scenario as the previous night followed. The observations started at 23:30 UT. The almost Full Moon remained visible until 00:50 UT so only two hours left without moonlight. The limiting magnitude rose from 5.8 to 6.3 and then dropped somewhat again. The circumstances were slightly less than the previous night. The sky was a bit hazy.
The Perseids were only a little bit more active than in the previous night. I worked with 15-minute counts and counted between 5 and 9 Perseids each period. Observing meteors was a pleasure again, with a quiet Groevenbeekse Heide with the owl and lots of bats.
Less bright Perseids than the night before. A -2 Perseid at 02:20 UT appeared in Perseus and it was the brightest meteor of this night.
In total I observed 85 Perseids, 4 southern delta Aquariids, 3 Antihelions and 2 kappa Cygnids in a total of 3.12 hours. Together with 17 sporadic meteors, a total of 111 meteors. The all sky camera captured two Perseids, the CAMS systems recorded 247 meteors. The fact that CAMS scored less than the previous night was due to the fact that during the first 1.5 hours of the night there were still many clouds moving over Ermelo.

Unfortunately, 12/13 august was clouded out. The weather forecast for 13/14 August was a complete clear night, but the sky was mostly covered with clouds…

After August 21 the Moon would disturb less night after night. And so, thanks to high pressure areas, I was able to observe 5 nights in a row at the end of August.
But before that, the all sky camera captured a nice sporadic fireball of magnitude -6 low in the northwest on August 18, 2019 at 23:36:08 UT (timing from Klaas Jobse at Oostkapelle, NL).

21/22 August, 2019
I did a short session from the meteor roof at home because only an hour would be moonless. It was possible to observe between 20:30 and 21:40 UT under hazy conditions. SQM maximum 19.98 and limiting magnitude reached 6.1. During 1.167 hours, I counted 11 meteors of which 1 Perseid, 1 kappa Cygnid and 1 Antihelion. The Perseid was a real beauty!! At the end of this session a nice -2 Perseid moved from Draco to Hercules with a persistent train of 3 seconds. It was also captured by the all sky camera.

22/23 August, 2019
Every night after September 22, the Moon was rising later and later, allowing me to observe longer. This session was between 20:25 and 22:11 UT (1.75 hours effective) from the meteor roof again and under slightly hazy conditions (limit magnitude 6.2 and SQM 20.07). This resulted in 19 meteors of which 1 Perseid, 2 kappa Cygnids and 1 Antihelion. The most beautiful meteors were a Perseid of +1 and a sporadic meteor of magnitude 0.

23/24 August, 2019
3rd clear night in a row, again from the meteor roof. I was able to observe between 20:23 and 22:32 UT (2.15 hours effectively). Unfortunately, the sky was slightly hazier than the previous night, so the limiting magnitude did not exceed 6.1 and the SQM did not exceed 20.03.
A total of 20 meteors were counted. Striking was the number of Perseids despite a low radiant position and so late in the period: 4 Perseids (with magnitudes +1, +3, +3 and +4). There may of course occasional “pollution” between Perseids and sporadic meteors coming from the same area of the sky. The sporadic meteors stole the show this session with two meteors of magnitude +1 and 0, both with long persistent trains.

24/25 August 2019
4th clear night in a row. The sky was again a bit hazy but better than August 23/24. This night, I decided to observe from the Groevenbeekse Heide (a heath). It was possible to observe between 20:23 and 23:04 UT (2.58 hours effectively). The limiting magnitude increased to 6.3 at most and the SQM reached 20.30 (at a location where I once measured 20.65).
A total of 25 meteors were seen, so this number was a bit disappointing compared to the previous nights. Of those 25 there were 3 Perseids, 1 Aurigid, 3 kappa Cygnids and 3 Antihelions. Surprisingly, no bright meteors were seen. That is unusual, because the end of August is known for the beautiful meteors that often appear. Yet one interesting meteor: a beautiful Aurigid (?) Earthgrazer was seen from +2 moving from Cepheus to Scutum.
25/26 August 2019
The 5th night in a row and finally a really nice night. Although the limiting magnitude was at the same level as the previous night (6.3), the transparency was much better, especially at a lower altitude. The SQM now reached a maximum of 20.31. Observations were done between 20:28 and 23:51 UT (3.32 hours effectively). A total of 34 meteors were counted, including 1 Aurigid, 1 Perseid, 3 kappa Cygnids and 3 Antihelions. This time beautiful meteors, two kappa Cygnids of magnitude -1 and 0 were seen. It should be noted that the -1 kappa Cygnid had a rather long path in relation to the distance of the radiant. This white meteor did show a flickering appearance with a wake.
The highlight was of course the beautiful sporadic fireball of 21:44 UT. I was just recording a SQM measurement when a fast green fireball of magnitude -6 was seen near the “mercedes” of Aquarius. WOW: what a bright persistent train (starting at magnitude +1), which unfortunately weakened very quickly. After 10 seconds there was nothing left to see. The all sky camera has also caught this meteor. Friend and fellow observer Michel Vandeputte, observing from Ronse, Belgium, had also seen this fireball. This was the last night of 5 clear nights in a row, the second heat wave in the Netherlands was coming to an end, which would be accompanied by clouds, rain and thunder.

29/30 August, 2019
Trying to catch some Aurigids! After the alarm went off, the sky was clear. When I arrived at the heath at 23:20 UT I am shocked: a number of enormous blue light beams were spinning around and a large part of it was lit up. I soon realized that these were the preparations for the Classical Groevenbeekse outdoor concert that always takes place at the end of August. On all sky pictures made during earlier edditions I saw that it usually ends around 23:30 PM UT. Indeed, after fifteen minutes the light beams went out and started the session at 23:38 UT.
However, there was also a lot of fog, there was no wind, so gradually the sky became foggy. After more than an hour I had to stop, because the limiting magnitude dropped to 6.1 with a rapid decline towards the horizon. In total I saw 10 meteors in 1.1 hours effectively, of which 1 Aurigid, 1 kappa Cygnid and 1 Antihelion.

30/31 August, 2019
Fortunately, this night was very clear. This session started at 00:00 UT and ended at 03:03 UT with the limiting magnitude increasing to 6.4 and the SQM reached 20.41. In the low east there was some cirrus visible, and also some cirrus was coming from the west, but it dissolved completely before entering my field of vision. This was also visible on sat24 which I consulted before I left for the heath. An extremely spheric night with the owl, bats and fog benches almost all the time lower on the heath.
During 3.00 hours effectively I counted 39 meteors of which 4 Aurigids, 1 September Perseid, 2 kappa Cygnids and 4 Antihelions. Most of them were weak. Only three meteors of +1 being an Aurigid, kappa Cygnid and a sporadic meteor were the highlights this session. Despite the lack of bright meteors, this was a beautiful night thanks to the dark starry sky. 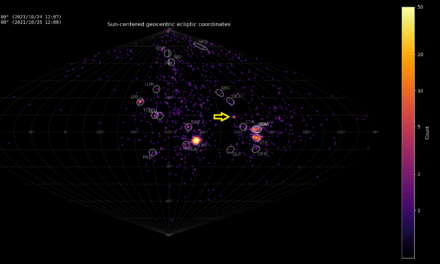