January is best known for the Quadrantids, which have the potential of being the best shower of the year. Unfortunately this shower is short lived and occurs during some of the worst weather in the northern hemisphere. Due to the high northern declination (celestial latitude) and short summer nights, little of this activity can be seen south of the equator. There are many very minor showers active throughout the month. Unfortunately most of these produce less than 1 shower member per hour and do not add much to the overall activity total. Activity gets interesting as seen from the southern hemisphere as ill-defined radiants in Vela, Carina, and Crux become active this month. This activity occurs during the entire first quarter of the year and moves eastward into Centaurus in February and ends in March with activity in Norma and Lupus. Sporadic rates are generally similar in both hemispheres this month. Sporadic rates are falling though for observers in the northern hemisphere and rising as seen from the southern hemisphere.

During this period the moon waxes from a half-illuminated phase to nearly full. This weekend the waxing gibbous moon will set during the early morning, allowing a few hours of viewing under dark skies. The estimated total hourly meteor rates for evening observers this week is near 3 for those viewing from the northern hemisphere and 2 for those located south of the equator. For morning observers the estimated total hourly rates should be near 17 as seen from mid-northern latitudes (45N) and 10 as seen from tropical southern locations (25S). The actual rates will also depend on factors such as personal light and motion perception, local weather conditions, alertness and experience in watching meteor activity. Evening rates are reduced due to moonlight. Note that the hourly rates listed below are estimates as viewed from dark sky sites away from urban light sources. Observers viewing from urban areas will see less activity as only the brightest meteors will be visible from such locations.

The radiant (the area of the sky where meteors appear to shoot from) positions and rates listed below are exact for Saturday night/Sunday morning January 4/5. These positions do not change greatly day to day so the listed coordinates may be used during this entire period. Most star atlases (available at science stores and planetariums) will provide maps with grid lines of the celestial coordinates so that you may find out exactly where these positions are located in the sky. A planisphere or computer planetarium program is also useful in showing the sky at any time of night on any date of the year. Activity from each radiant is best seen when it is positioned highest in the sky, either due north or south along the meridian, depending on your latitude. It must be remembered that meteor activity is rarely seen at the radiant position. Rather they shoot outwards from the radiant so it is best to center your field of view so that the radiant lies at the edge and not the center. Viewing there will allow you to easily trace the path of each meteor back to the radiant (if it is a shower member) or in another direction if it is a sporadic. Meteor activity is not seen from radiants that are located below the horizon. The positions below are listed in a west to east manner in order of right ascension (celestial longitude). The positions listed first are located further west therefore are accessible earlier in the night while those listed further down the list rise later in the night. Now that the activity from particles produced by comet 2P/Encke have ceased encountering the Earth, the Taurid showers are over and we resume reporting activity from the Anthelion (ANT) radiant. This is not a true radiant but rather activity caused by the Earth’s motion through space. As the Earth revolves around the sun it encounters particles orbiting in a pro-grade motion that are approaching their perihelion point. They all appear to be radiating from an area near the opposition point of the sun, hence the name Anthelion. These were once recorded as separate showers throughout the year but it is now suggested to bin them into their category separate from true showers and sporadics. There are several lists that have the delta Cancrids currently active, but we include them with the Anthelions as the celestial positions overlap. This radiant is a very large oval some thirty degrees wide by fifteen degrees high. Activity from this radiant can appear from more than one constellation. The position listed here is for the center of the radiant which is currently located at 07:48 (117) +21. This position lies in eastern Gemini, 8 degrees south of the 1st magnitude star known as Pollux (beta Geminorum). Since the radiant is so large, Anthelion activity may also appear from Cancer as well as Gemini. This radiant is best placed near 02:00 local summer time (LST) when it lies on the meridian and is highest in the sky. Rates at this time should be near 3 per hour as seen from the northern hemisphere and 2 per hour as seen from south of the equator. With an entry velocity of 30 km/sec., the average Anthelion meteor would be of slow velocity.

The alpha Hydrids (AHY) were discovered by Dr. Peter Brown and are mentioned in his article “A meteoroid stream survey using the Canadian Meteor Orbit Radar”. This shower is active from December 17 through January 17 with maximum activity occurring on January 3rd. The radiant is currently located at 08:32 (128) -09. This position lies in the western Hydra, 12 degrees west of the 2nd magnitude star known as Alphard (alpha Hydrae). These meteors are best seen near 0300 LST when the radiant lies highest above the horizon. At 43 km/sec. the alpha Hydrids produce meteors of medium velocity. Expected rates this week are near 1 per hour no matter your location.

The kappa Cancrids (KCA) are not normally mentioned as a target for visual observers but during 2015 and 2016, activity has been noticed on video cameras that could be viewed by visual observers. These meteors are expected to be most active on January 10, near 09:49 Universal Time. This is during the early morning hours for observers in North America. At that time the radiant will be located in the western sky near the position of 09:12 (138) +09. This area of the sky lies approximately 5 degrees northeast of the “head” of Hydra. Nothing extraordinary is expected but any activity would be newsworthy. These meteors would most likely have a velocity of near 50 km/sec. and produce medium-fast meteors. The full moon will lie in central Gemini, only 15-20 degrees away. Therefore it will extremely difficult to detect any of these meteors. Video cameras are less affected by moonlight therefore those with these instruments may be able to detect some activity from this source.

The January Leonids (JLE) were also discovered by Dr. Peter Brown and are mentioned in the same source as the Alpha Hydrids. This shower is active from December 30 through January 7 with maximum activity occurring on January 4th. The radiant is currently located at 09:55 (149) +24. This position lies in northwestern Leo, 1 degree east of the 3rd magnitude star known as Algenubi (epsilon Leonis). These meteors are best seen near 0400 LST when the radiant lies highest above the horizon. At 59 km/sec. the January Leonids produce meteors of swift velocity. Expected rates this week are near 1 per hour as seen from mid-northern latitudes and less than 1 as seen from the southern hemisphere.

The December Leonis Minorids (DLM) are a shower of long duration active from December 6th through January 18th. Maximum occurred near December 21st . The radiant is currently located at 11:34 (174) +24. This position lies in northeastern Leo, 6 degrees northeast of the 3rd magnitude star known as Zosma (delta Leonis). These meteors are best seen near 0600 LST when the radiant lies highest above the horizon. Current hourly rates are expected to be less than 1 no matter your location. At 63 km/sec. the December Leonis Minorids produce mostly swift meteors.

The lambda Bootids (LBO) are another discovery by Dr. Peter Brown and his team at the University of Western Ontario, London, Ontario, Canada. They were using radio means to discover new streams. These meteors are active from December 31 through January 17 with maximum activity occurring on the 16th. The radiant currently lies at 14:00 (210) +51. This position lies 3 degrees northeast of the 2nd magnitude star known as Alkaid (eta Ursae Majoris). These meteors are best seen during the last dark hour before dawn. Current rates are expected to be less than 1 per hour no matter your location. At 41 km/sec. these meteors are of medium velocity.

The gamma Ursae Minorids (GUM) were also discovered by Dr. Peter Brown and associates. These meteors are active from January 09-20, with maximum occurring on the 18th. The radiant is currently located at 15:06 (227) +73, which places it southern Ursa Minor between the bright stars in the base of the Little Dipper known as Pherkad (gamma Ursae Minoris) and Kochab (beta Ursae Minoris). These meteors are best seen during the last few hours before dawn, when the radiant lies highest in a dark sky. Expected rates are less than 1 per hour during this period no matter your location. These meteors encounter the atmosphere at 30 km/sec., which would produce meteors of medium-slow velocity.

The Quadrantids (QUA) are active from December 22nd through January 17th. Maximum occurs on January 4 when rates may reach 100 an hour from dark sky sites over the Atlantic area and eastern North America. The radiant is currently located at 15:23 (231) +49. This position lies in northern Bootes , roughly between 3rd magnitude Edasich (iota Draconis) and Nekkar (beta Boötis). 2nd magnitude Alkaid (eta Ursae Majoris), the bright star at the end of the Big Dipper’s handle, lies 25 degrees to the west. These meteors are best seen during the last hour before dawn when the radiant lies highest above the horizon in a dark sky. At 41 km/sec. the Quadrantids produce meteors of moderate velocity. These meteors are visible from the southern tropics but not seen from the deep southern hemisphere. 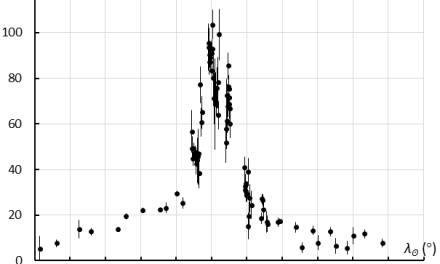 The Perseids in 2018 Analysis of the visual data