A summary of the activity of the CAMS BeNeLux network during the month of December 2019 is presented. 22591 meteors were recorded, 12329 of which proved multiple station, or 55%. Weather remained relative favorable, 28 nights allowed to collect some orbits with as many as 13 nights with more than 100 orbits. In total 4124 orbits were added to the CAMS BeNeLux database.

With more than 14 hours observing time to capture meteors each night, December could be the most rewarding meteor month of the year. The richest annual shower, the Geminids has a broad maximum on December 13–14 while also 12–13 and even 14–15 December produce large numbers of meteors. However, the reason why December in generally disappoints is the most unfavorable weather this time of the year. What would 2019 bring?

CAMS BeNeLux collected 22591 meteors of which 12329 or 55% were multi-station, good for 4124 orbits (compared to 25912 meteors, 13220 or 51% multi-station and 4908 orbits in December 2018). This month counted 13 nights with more than 100 orbits and only 3 nights without any orbits. Not any night remained without some meteors being recorded at some stations. The weather circumstances were definitely better this year than in December 2018. The main raison why less meteors and less orbits were collected in 2019 is the bad luck during the main Geminid activity nights, 12–13 and 13–14. The nice score in orbits in December 2018 was thanks to a lucky coincidence that some of the very few clear nights happened during the best Geminid activity nights. During most nights of December 2019, the network had to function with less cameras since two cornerstone CAMS stations, Gronau and Terschelling, were not available and some other stations suffered technical problems.

The statistics of December 2019 are compared in Figure 1 and Table 1 with the same month in previous years since the start of CAMS BeNeLux in 2012. In 8 years, 182 December nights allowed to obtain orbits with a grand total of 19627 orbits collected during December during all these years together.

While December 2017 had a maximum of 86 cameras, 68.9 on average available, December 2018 had 78 cameras at best and 69.8 on average, in 2019 the network had 82 cameras operational on some nights, 72.8 on average. The role of AutoCams is essential to take advantage of the unpredictable nature of the weather during the long winter nights. In spite of what most amateurs expect with our very mediocre weather circumstances, there are rather few nights without any clear spans. It is often remarkable how many meteors can be registered during unpredicted moments with some clear sky. The chances to have multi-station events are modest with such variable cloud cover, but the more stations that function 7/7 with AutoCams, the better the chances to obtain more orbits. 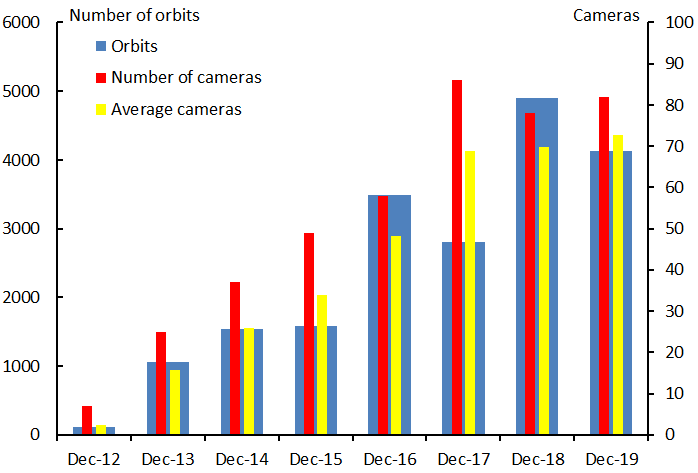 December 2019 brought relatively good observing conditions, but no luck with the best Geminid nights this year. All in all, the harvest in number of orbits is an excellent result.

Many thanks to all participants in the CAMS BeNeLux network for their dedicated efforts. Thanks to Carl Johannink for providing all the data on which this report is based. The CAMS BeNeLux team was operated by the following volunteers during the month of December 2019:

The interesting case of a slow meteor Aten’s orbit type