Abstract: The origin of the Taurid complex is still debated. In addition to comet 2P/Encke, various asteroids were proposed to be members of the complex and thus possible parent bodies of Taurid meteoroids. Studies of physical properties of Taurid meteoroids can provide constrains on their source. We used a well defined orbital sample of 16 Taurid fireballs with detailed radiometric light curves. The sample represented meteoroids of initial masses from 8 grams to 650 kg (diameters 1 – 70 cm). The semi-empirical fragmentation model was used to study their atmospheric fragmentation and derive strength distribution within the meteoroids. It was found that small meteoroids are stronger than large ones. When considering Taurid material as a whole, the majority has a very low strength of less than 0.01 MPa and a density less than 1000 kg m^−3. The low strength material exists mostly as large bodies (> 10 cm). If encountered in smaller bodies, it forms only a minor part. Stronger materials up to 0.3 MPa exist in Taurids as well, but the stronger material the rarer it is. Strong material forms small inclusions in large bodies or exists as small (cm-sized) separate bodies. These properties strongly suggest cometary origin of Taurids. 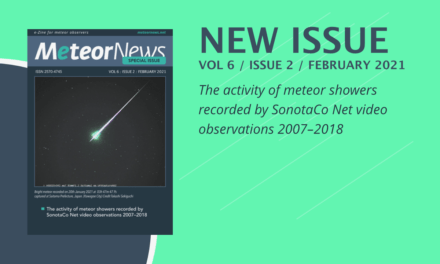 News from the meteor library: Chinese Fireball of December 22, 2020