The MeteorNews article dated 6 Nov 2019 by Esko Lyytinen and Peter Jenniskens alerted meteor observers to the possibility of a “short-lived outburst” of the alpha Monocertid (AMO#246) meteor shower on the night of November 21-22. The prediction was for the outburst to last from 15-40 minutes, centered on 22 Nov 04:50 UT with a zenithal hourly rate (ZHR) ranging from “about a hundred to even storm level (with a ZHR of more than 1,000).” The last outburst of this meteor shower occurred in 1995, and the prospect of another one generated much interest in the meteor community. [https://www.meteornews.net/2019/11/06/likely-alpha-monocerotids-amo246-outburst-on-the-morning-of-november-22-2019/.]

The CAMS-Florida network monitors an annulus about

CAMS-Florida consists of twenty-nine video cameras at five locations. The network employs an array of cameras based on the 1/2 inch chip (Watec 902H2 Ultimate) and 1/3 inch chip (Sony ICX 672 and ICX 810). Using 12mm f/1.2 lenses, the Watec cameras have a limiting meteor magnitude of +4, while the other cameras use 8mm f/1.0 lenses to achieve a meteor limiting magnitude of +3.5. Fields of view are

for the Watec cameras, and

for all others. For time-keeping, each CAMS-Florida station uses either a GPS time server or Network Time Protocol (NTP). 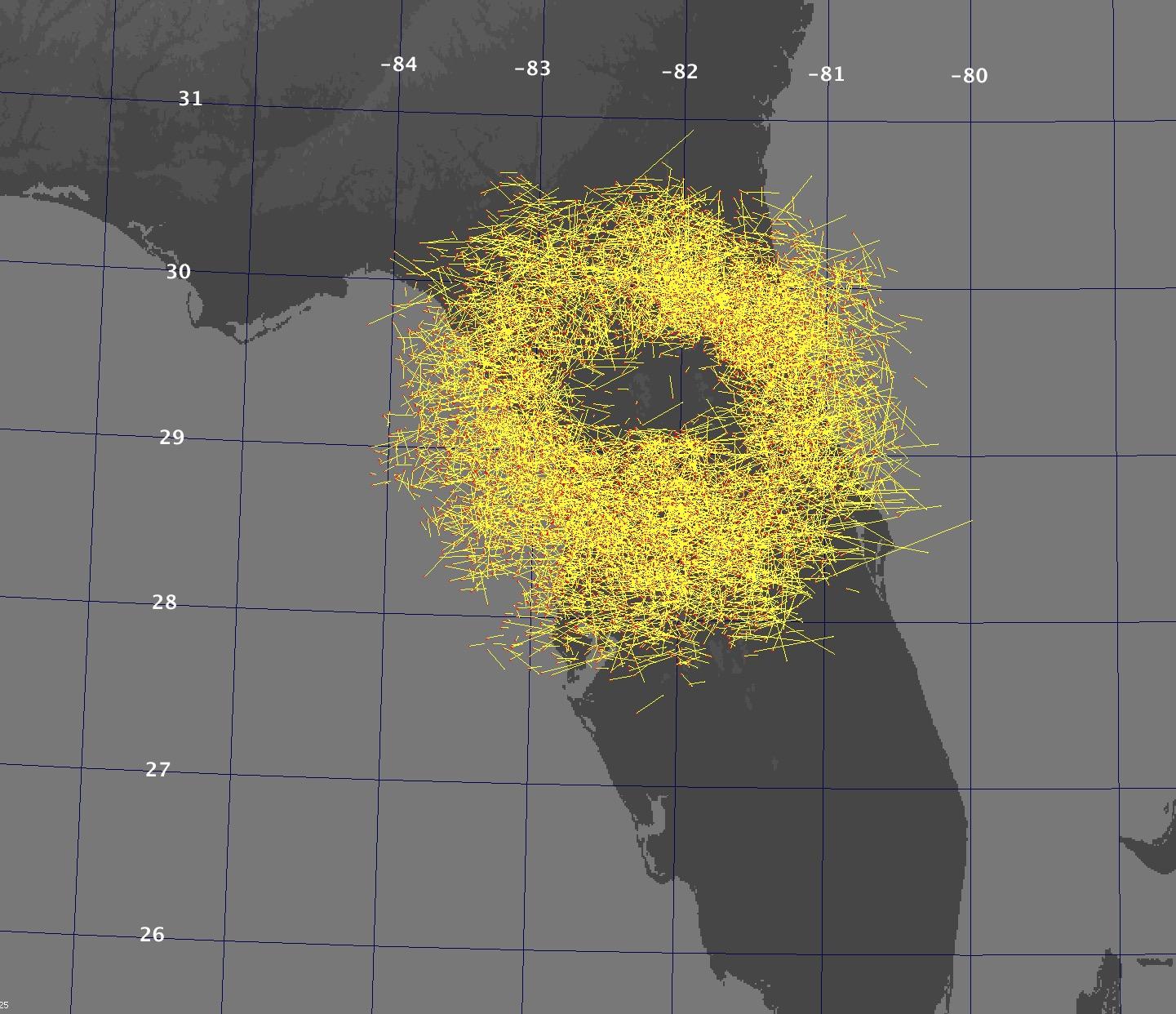 As the sky darkened above Florida on the evening of Nov 21-22, skies were mostly clear. Ten minutes before local midnight (21 Nov 23:50 EST  = 22 Nov 04:50 UT), when the outburst was predicted to reach its peak, the radiant would be between 21 and 23 degrees above the eastern horizon. CAMS-Florida cameras operated without interruption during the night. UFOOrbit software [http://sonotaco.com/soft/e_index.html#ufoo] was used the next morning to calculate radiants and orbital parameters. The results showed that CAMS-Florida had detected forty-four alpha Monocerotid meteors.

Table 2 lists the times, in order of appearance, of the forty-four coincident meteors. The outburst’s first coincident meteor was spotted at 4:38:27.746 UT, and the next-to-last was detected at 5:36:57.258 UT. A lone straggler came into view 2 1/2 hours later at 7:55:40.143 UT, yielding the night’s final total of 44 confirmed meteors from the AMO outburst. Each meteor was seen by a minimum of two geographically separated sites.

Interarrival time and the arrival rate of meteors

is the UT time of the i-th meteor, and

is the number of meteors seen.

with a precision of 30-40 milliseconds. The utility of interarrival times is that they give a nearly instantaneous reading of the level of meteor activity.

An intuitive method to estimate the meteor arrival rate,

, is to take the reciprocal of interarrival time,

second, equivalent to a rate of 360 meteors per hour.

is the statistical estimator of the parameter,

, which is the “true” (but unknown) arrival rate of meteors. It can be shown that

is the maximum likelihood estimator of the arrival rate. (Ross, p. 267)]

, is a point estimate. By itself, it gives no information about the precision of the estimate. For this reason, it is desirable to calculate upper and lower bounds that constrain, with a specified level of confidence, the likely range of

Confidence interval of the arrival rate of meteors

The number of meteors seen during a specified time interval is often modeled as a Poisson process. The Poisson model has just one parameter,

, the rate parameter. Three conditions are necessary for the Poisson model to apply: (1) Events are indpendent of one each other; (2) The average rate (events per time period) is constant; (3) Two events cannot happen at the same time. [https://towardsdatascience.com/the-poisson-distribution-and-poisson-process-explained-4e2cb17d459.]

The Poisson model  has a close connection with interarrival times. If the occurrence of meteors conforms to a Poisson process with parameter

The exponential distribution has the important property that it is “memoryless.” That is, prior history does not affect the time until the next event (i.e., meteor arrival). The probability of seeing a meteor during the next period of time is the same regardless of how long one has already been waiting.

Suppose one has n observations of meteor interarrival time, whose sample mean is  is

. The reciprocal of this statistic yields the maximum likelihood estimator of the meteor arrival rate,

. From this, one constructs a

is the “miss rate” of the confidence interval:

When analyzing a meteor shower’s outburst, it’s desirable to get the highest possible time resolution. For this purpose, set n=1, which yields the confidence interval of meteor arrival rate from a single observation of meteor interarrival time:

, where T is the measured interarrival time. The chosen value of miss rate,

, determines the width of the confidence interval. A smaller

of a normal distribution.

Simulations of interarrival time in an Excel spreadsheet show that the confidence interval calculated this way works as expected. The simulations tested meteor arrival rates

= 1, 10, 100, and 1000 per hour. In each of these trials, the calculated confidence intervals correctly captured the population parameter,

, very nearly equal to the theoretical expectation of

. When the confidence interval did not include

, the parameter landed with nearly equal frequency on both sides of the confidence interval.

Table 3 presents the list of forty-four alpha Monocerotid meteors observed by CAMS-Florida. A minimum of two cameras at two different sites observed each meteor. The start time of each meteor’s track varied slightly between cameras. For one-half (50%) of the observed meteors, the start times agreed within 38 milliseconds, and the average time difference was 78 milliseconds. The largest recorded time difference in start time was 324 milliseconds, which is explained by the time delay to enter a camera’s field of view, whenever a meteor first appeared outside the field of view. The arrival time of each meteor was set equal to the time of earliest detection by the ensemble of cameras.

Timeline of the alpha Monocerotid outburst

This report gives a statistical method to estimate meteor arrival rate using interarrival times. Each new arrival of a meteor gives another measurement of the rate of a meteor shower. Measurements are inherently more powerful than the counting data that meteor observers have historically used.

The analysis of interarrival times of the AMO outburst shows that CAMS-Florida observed a peak hourly rate of 100-200 per hour, with possible short-lived spikes up to 1000 per hour. The duration of peak rate was short, lasting no more than 10-15 minutes.

The results reported by CAMS-Florida are apparent rates, not zenithal hourly rates (ZHR). Further work is needed to convert the observed rates to ZHR, accounting for such factors as (1) radiant elevation; (2) population index; (3) camera limiting magnitude; and (4) areal coverage of CAMS-Florida. Put another way, calibration of the measurement system is necessary before definitive conclusions can be made regarding zenithal hourly rate. 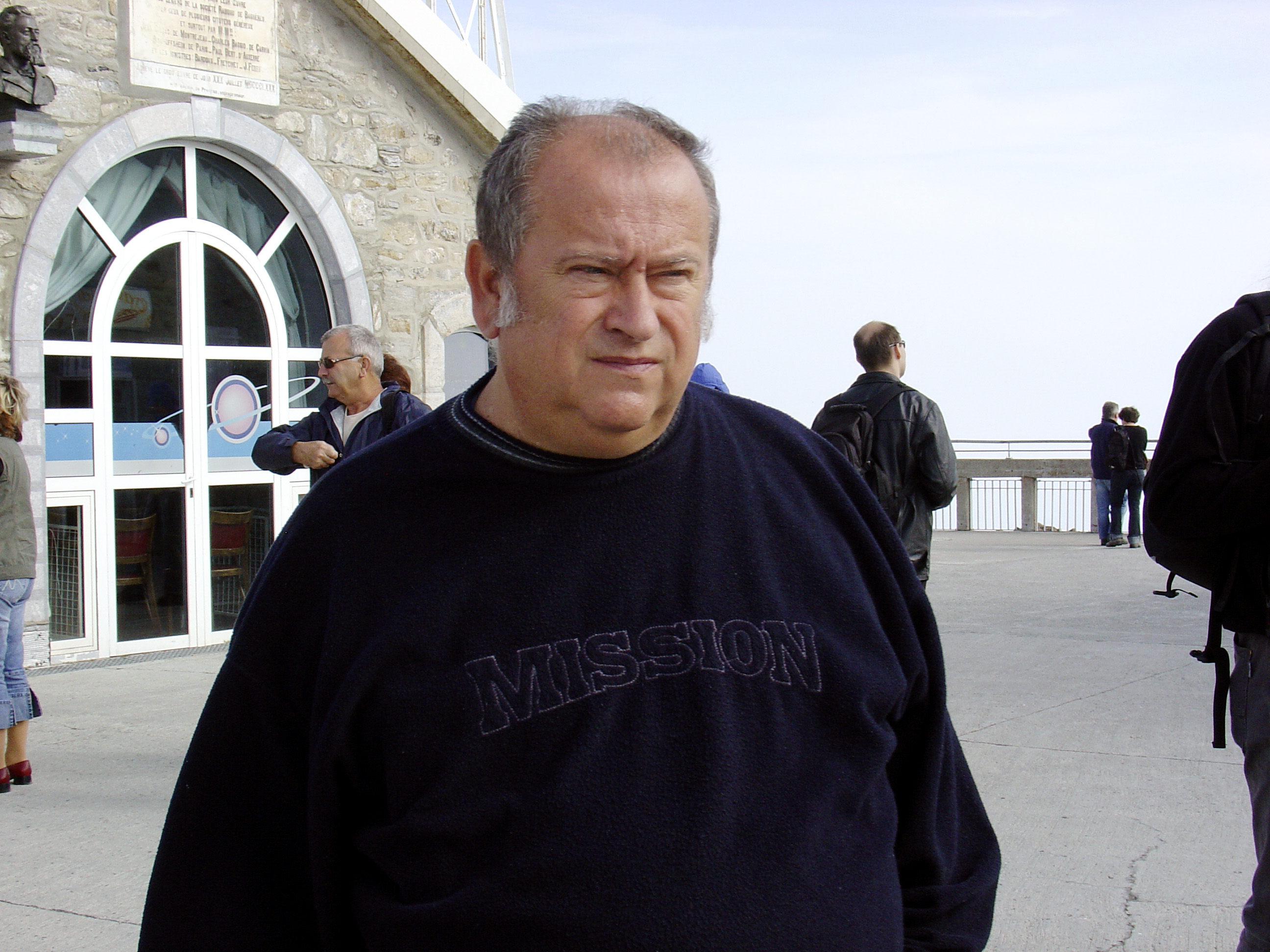 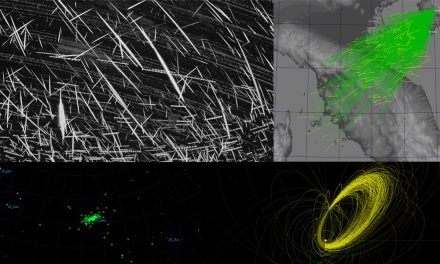