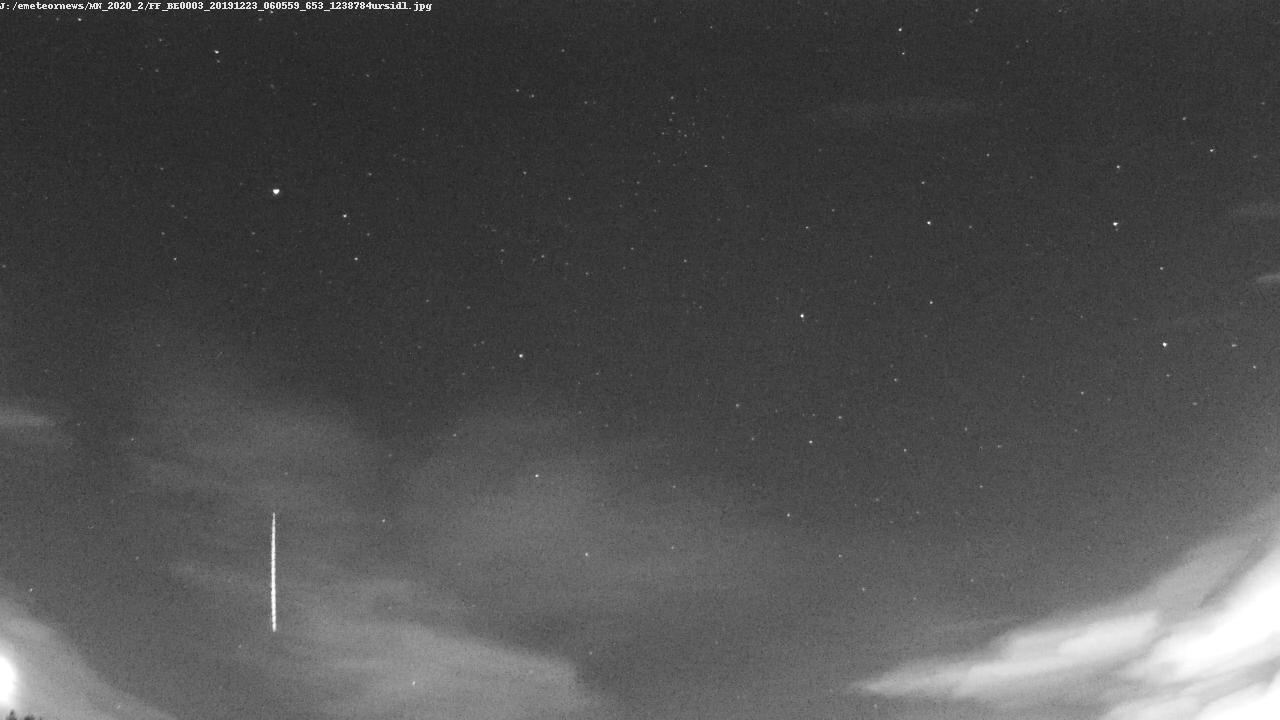 Abstract: The United Arab Emirates Camera Network, UACN, registered a significant number of Ursid orbits during the night of 22-23 December 2019 between 20h00m and 02h00m UT. The CAMS-BeneLux network struggled with poor weather circumstances but still registered three Ursid orbits, when the sky conditions improved after 2h UT, the number of Ursid orbits had decreased. The question arises if the Ursids should remain on the short list of annual major showers since the activity is comparable or inferior to several established minor showers. A -1 Ursid meteor recorded with RMS cameras allowed to calculate its orbit with three different orbit software solutions which resulted in three similar but nevertheless not identical orbits.

The Ursid meteor stream is being listed since long time as one of the annual major showers. However, anyone who made attempts to observe this shower has been disappointed unless being lucky to observe during one of the outbursts of the Ursids. Most of the time low numbers of Ursid meteors are registered, not at all at the level of any of the major showers. The question arises if the Ursids should be rather qualified as a minor shower that may produce outbursts? Listing the Ursids as an annual major shower raises expectations that are most of the time not fulfilled. This is a good topic for a future case study.

The numbers of Ursid orbits depend upon the weather circumstances across the camera networks, but these numbers are very low. In Table 1 we list the number of Ursid orbits registered by all CAMS networks together for each night. The first Ursid orbit was registered during the night December 11–12, the last one December 24–25, the sharp maximum occurred in the night of December 22–23 at about λʘ = 270.52°.

Table 1 also lists the number of orbits registered for three established minor showers: the sigma Hydrids (HYD#016), the December Monocerotids (MON#019) and the December Comae Berenicids (COM#020). If these are typical minor showers, then what are the Ursids?

Unfortunately, the CAMS BeNeLux region remained overcast at most places in the evening hours that night. Only three meteors, all Ursids, were collected before 2h UT: one at 20h14m UT, one at 21h13m UT and another at 00h24m UT. No dust trails were expected to produce any enhanced activity in 2019.

Between 2h00m–3h00m UT two orbits were registered, once again both Ursids (02h29m and 02h46m UT). After 03h00m UT more and more regions in the BeNeLux got clear sky, but unfortunately the Ursid activity seemed to have weakened. Until twilight, another 31 meteor orbits were collected, including only 5 Ursids, even though the radiant was located higher in the sky.

The orbital elements for all ten Ursids are listed in Table 3. The mean orbit (Jopek et al., 2006) was calculated using all these orbits except the Ursid registered at 06h24m which has a too high geocentric velocity. The result is shown in Table 2 and compared with a reference from literature.

The Ursid of December 23, 06h06m UT was recorded by two RMS cameras (see Figure 2 and 3). The orbits calculated by CAMS software are marked with ‘C’ in Table 3. The RMS camera data has also been analyzed by Denis Vida for the Global Meteor Network and since the RMS cameras provide also the detection info in UFO Capture format, Takashi Sekiguchi could compute the orbit with the UFO_orbit software of SonotaCo. This offers a unique possibility to compare the computational result for the orbit obtained by three different software solutions, based on identical measured positional data.

The results can be compared in Table 3 with the three last mentioned orbits obtained for the same Ursid meteor, computed by Carl Johannink (C), by Denis Vida (G) and by Takashi Sekiguchi (S). The CAMS software and the SonotaCo software are well established, while the Global Meteor Network software is still being finetuned. SonotaCo uses only the position of the begin and end points of the meteor to compute the trajectory solution and the orbit. CAMS and GMN use all the measured positions on the meteor trail and take the deceleration into account.

The three solutions result in three similar orbits, but these orbits are not identical. CAMS gives the highest geocentric velocity vg, eccentricity e, inclination i, and the lowest argument of perihelion ω. The GMN solution has the begin point He more than a kilometer lower in the atmosphere than CAMS, although the measured position used is identical.

These results provide us with an idea to which extent the method used to compute the orbit produces a slightly different result. The differences are larger than the error margins given and should be explained somehow. When the orbits depend so much on the method used to compute them, the resulting mean orbits that serve as references will also be different from each other. Another question arises as how many digits behind the comma are relevant to be listed for orbital elements?

The Ursids displayed a fair level of activity during about 6 hours in the night of 2019 December 22–23, 20h to 2h UT, but the number of orbits recorded for the Ursids remains rather modest compared to the numbers recorded for some minor showers that are active at the same time. The question arises if the Ursids should remain listed as an annual major shower, or be rather considered as a minor shower with periodic outbursts?

Computation of the orbit for an identical Ursid meteor using the CAMS software, the GMN software and the SonotaCo software results in similar but not identical orbits. The question if and to which extent orbits may differ depending on the software used requires further investigation.

The authors wish to thank Denis Vida for providing the GMN results and the Py program to compute average orbits according to the method of Jopek et al. (2006). We thank Takashi Sekiguchi for his computations with the SonotaCo software and Masahiro Koseki for his mediation. 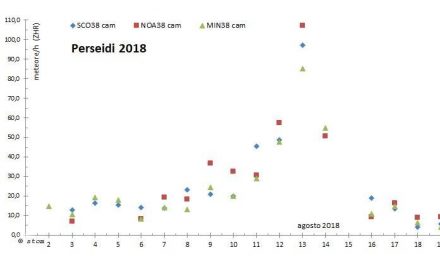