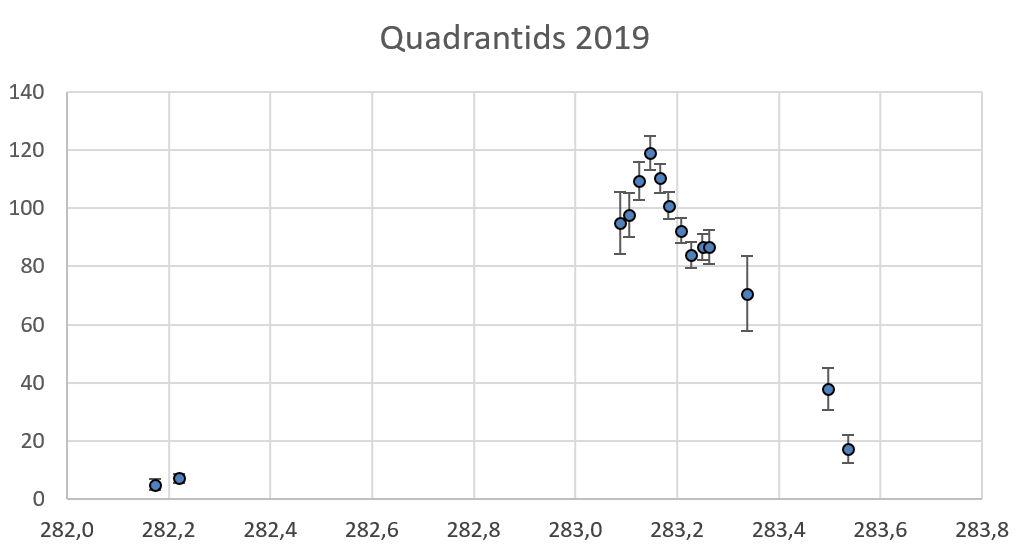 Introduction
The Quadrantids are always the first active meteor shower of the year. The Quadrantids show a sharp maximum around January 4, which unfortunately only lasts a short time. As a result, the numbers of Quadrantids that are visible each year are very variable. If the maximum falls during the day, you will see much less in the nights before and after it than when the maximum falls in the second part of the night. And that can make a big difference in the numbers of observed meteors.
Furthermore, the Quadrantids also show varying maximum activity due to planetary disturbances. The Quadrantids usually peak with a ZHR of 80, but there have also been years when the ZHR was much higher. During the ice-cold and crystal-clear night 3/4 January 1995, the ZHR reached around 140 with the ZHR above 100 until dawn [1, 2, 3]. The legendary DMS visual and photographic campaign from 1995 also produced a clue for the parent body of the Quadrantids [4] 2003 EH1 .
Also in 2009, a ZHR of 140 was observed, this time above America [6] and the period before that above Europe it was obvious that the Quadrantids were more active than what you normally would expect [5].
The astronomical circumstances for the Quadrantids in 2019 were particularly good for Europe with a predicted maximum on January 4 around 02:00 UT.
Unfortunately, the weather in January rarely cooperates. So, from the BeNeLux it was only possible to observe for a few hours in the evening when the radiant was still low in the north-west and north. Sky got cloudy after 23:00 UT due to an incoming front.
According to the live ZHR graph on the IMO website the Quadrantids in 2019 had a maximum ZHR of 116 on 4 January 2019 at 02:20 UT. After that the Quadrantids showed declining activity with a ZHR of 80 at 06:00 UT. A total of 35 observers reported 1993 Quadrantids to IMO. Enough for a comprehensive analysis!

Collecting the visual data
The data was collected via the IMO site and immediately checked for limiting magnitude (at least 5.9) and whether a good CP determination was available from the relevant observer. After entering all data, 1761 Quadrantids were used for the analysis. Once in the spreadsheet all data with lower radiant positions than rounded off 25 degrees were deleted. Fortunately, just a few meteors fell off. A total of 1749 Quadrantides remained available for the final analysis.
For both the population index r and ZHR, the data is checked on different criteria. That is also the reason why fewer meteors were used for the population index r than in the final ZHR calculations.

ZHR
The final ZHR calculation were made with population index r = 2.73 for the night 3/4 January and for the night 2/3 January an assumed population index r = 3.00 was used. A total of 1530 Quadrantids were used to calculate the ZHR. For the calculations 15 – 20-minute counts were used. Some observers sent in shorter counting periods, these were merged. The results of the calculations can be seen in Table 3 and Figure 2.

Conclusion
2019 was a good Quadrantid year, with a maximum ZHR of around 120. The time of the maximum was almost at the predicted time of January 4, 2019 around 02:00 UT. It is recommended for the Quadrantids during their maximum to observe in counting periods of 5 minutes.