A summary of the activity of the CAMS BeNeLux network during the month February 2020 is presented. This month was severely hampered by bad weather and remained without any single complete clear night. In total 7665 meteors were recorded, 3141 of which proved multiple station, or 41%. In total 1215 orbits were collected during this month. The number of available cameras increased from 74 in 2019 to 84 in 2020.

Winter months, in general, are very unfavorable for astronomy in the BeNeLux and so is February. However, both February in 2018 and in 2019 were exceptional favorable months for CAMS. As January 2020 ended as a really disappointing month for the network, the question was if we would be lucky again with February 2020?

Unfortunately, weather got worse instead of better compared to January. Storms dominated the weather week after week with mainly overcast sky with some clear spells at best. Most CAMS stations did not have any single complete clear night. Only three nights had over 100 orbits, while February 2019 had eight nights with more than 200 orbits, 2018 even had eleven nights with over 200 orbits. February 2020 became one of the worst months for CAMS BeNeLux.

CAMS BeNeLux managed to collect 7665 meteors (against 17784 in 2019 and 23439 in 2018) with a maximum of 84 cameras capturing at 22 participating stations. 3141 or 41% of these meteors were multi-station meteors, good for 1215 orbits (against 3485 in 2019 and 4147 in 2018). With the 2020 results the total number of orbits for February obtained by CAMS BeNeLux is 12055 orbits collected in 164 successful nights. The statistics for February 2020 are compared in Table 1 with all previous February months since the start of the CAMS BeNeLux network. Although more cameras were available than in 2019, the harvest in orbits remained far less due to the hopeless poor weather.

On average 72.6 of the available 84 cameras were capturing per night (68.8 of 74 in 2019). Especially in the first years, before AutoCams was available in the BeNeLux, many cameras remained switched off when the weather did not look good in the evening. This way the chances to obtain double station meteors for those cameras that remained active were rather small. Luckily, almost all camera stations function 7 on 7 now. This way only five nights remained without any orbit registered and not a single night remained without any meteor recording. AutoCAMS kept a minimum of 62 cameras active on all nights, even on completely overcast nights. On as many as 24 nights orbits have been collected. Figure 1 shows the camera capacity got restored compared to 2019, but the network did not yet get back at its strength of February 2018. 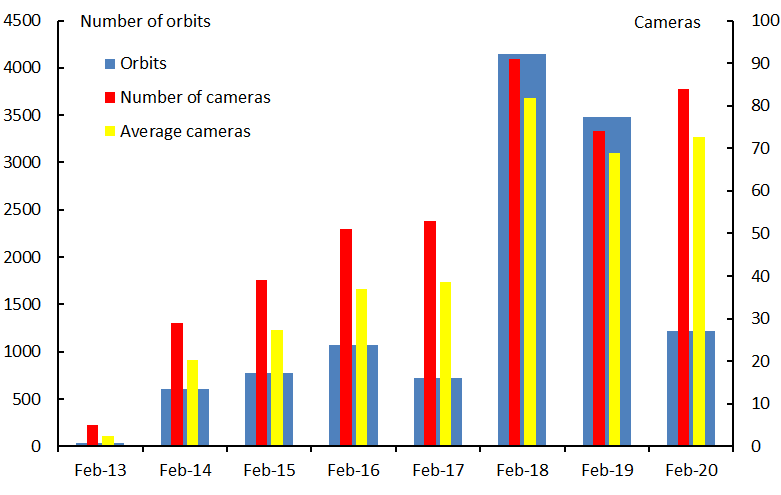 February 2020 was a month without any single complete clear night. It is a huge achievement that still 1215 orbits were collected under such poor weather conditions. 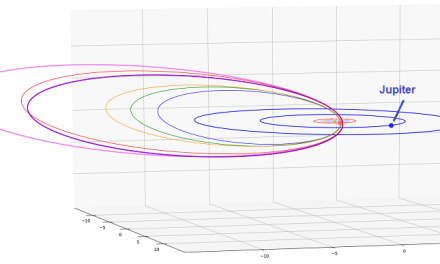 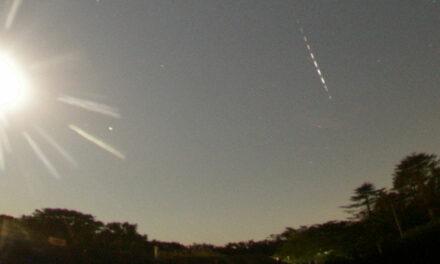