A description is given of the observing method and the different applications of the radio observations made at the Venice Planetarium in Italy.

Radio observations of meteors entering the atmosphere can offer a lot of useful information, but a certain amount of theoretical knowledge is necessary to correctly interpret the recorded data. The following is a briefly illustrated approach that our association has taken in this regard.

Since 2013 the local association of amateur astronomers has installed a radio station for the reception of meteor echoes in the atmosphere at the Planetarium of Venice with satisfactory results.  This choice was motivated by the interest to expand the study of meteors already widely developed for years in the video domain by many members.

The station, activated thanks also to the help of some amateur radio operators, consists of a Yaesu FT 817 receiver, a Yagi 6 element antenna and the Spectrum Lab software installed on a Pentium PC with Windows XP.  The signals transmitted on the frequency 143.050 MHz by the French radar Graves (Tx) at a distance of 573 km from the receiving station (Rx) in the Planetarium, are received when they are reflected on the ionized layers left by the meteors.

After a period of testing and experimenting with different software (Hrofft, SpectrumLab), the most appropriate configuration for the system used was established with Spectrum Lab. This software analyzes in real time the audio input of all events, selecting those apparently of meteoric origin. The listening frequency of the radio receiver was tuned just outside the carrier frequency to obtain a tone instead of the mute carrier signal.

A nice example of reception is shown in the spectrogram (Figure 1) where some meteor events are visible: the yellow red color is an indication for the signal strength at a given frequency and the echo amplitude (meteoric “ping”) shows the doppler displacement of the signal sent by the radar.

For each event, not only the statistical information (intensity, timing, frequency, duration, etc.) is saved, but also the audio input from which the software derives the spectrogram.

A correct reception obviously shows that the frequency of events varies according to the season and time of the day with a maximum in the early morning and a minimum in the afternoon (Figure 2). 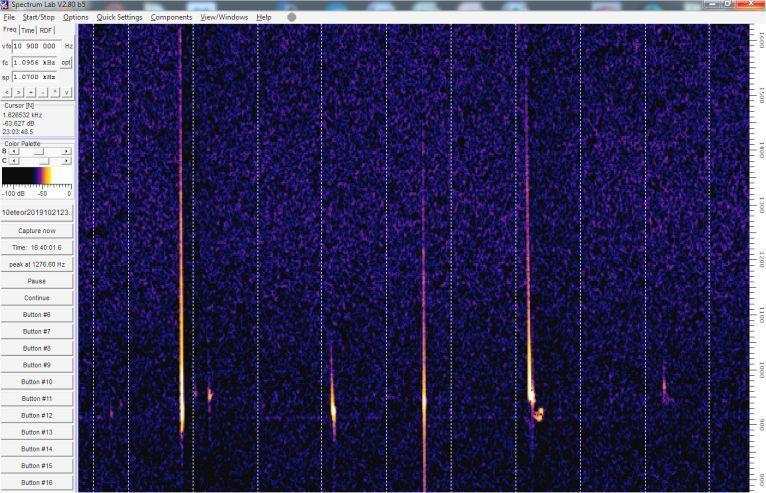 Figure 1 – Radio Spectrogram with some meteor events. The almost vertical lines correspond to the reflected echoes of the mobile plasma surrounding the meteor. 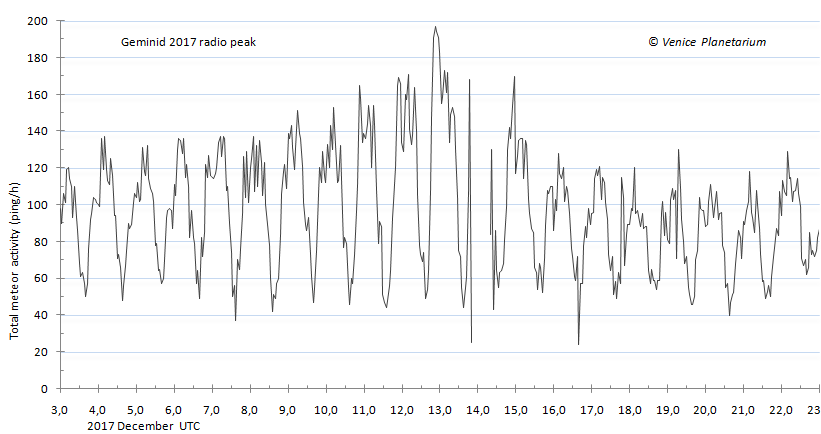 It must be kept in mind that the registered signals are not only due to meteors, but also to the passage of satellites, planes, as well as thunderstorms and disturbances of various kinds (solar radiation, discharges, etc.). The collected data also shows that in some cases a statistical count is not possible, for instance in cases with significant meteoric activity (outburst), because the detection software may show saturation problems when recording too many received signals. In order to obtain reliable meteor data, an attempt was made to manually filter out all false detections as far as possible, primarily by setting a precise frequency scan interval in order to limit the count to a precise range.

All statistical observing data are shared on the network almost instantly and made public via the Radio Meteor Observing Bulletin (http://www.rmob.org).

Figure 3 shows the graph of all hourly echo rates recorded over a period of about 20 days. When analyzing the events, it is not possible to discriminate shower meteors and sporadics, as the count shows all meteors as a total, i.e. those of all active meteor streams and sporadic meteors together.  Some radio echoes are also not physically recorded when they fail to emerge from the background noise or if there are persistent, overlapping disturbances in the reception. In order to obtain information on the actual meteor flux of a given shower at a given time it is therefore necessary to evaluate the data singularly and then to subtract the hourly rate of the non-shower meteors, obtained the days before and after when only the sporadic background was active.  To detect the real activity of the shower, it is necessary to take into account the variation of the observability function, which depends on various factors including, above all, the transmitter-meteor-receiver geometry (only meteors perpendicular to the Tx-Rx line are detected) and the height of the radiant. In this way it is possible to accurately determine the moment of maximum frequency, while the number of echoes will depend on the equipment used (Figure 4). 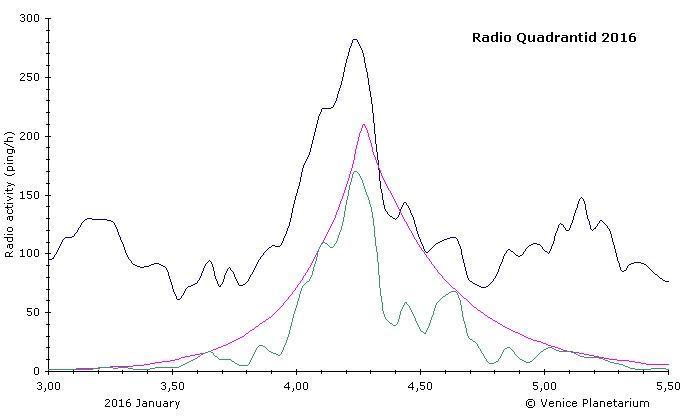 Figure 4 – Profiles of observed data, shower (without background) and the real shower curve. If the echo count is cleaned of the background and corrected for the observability function, a reliable measurement of the meteoric flux is obtained.

Figure 5 – Evidence for the outburst of the epsilon Perseids on 10 September 2013 using hourly rate data of persistence duration meteors.

The meteor activity has also been analyzed using the different durations of radio echoes which depend on the persistence of ionized meteoric trails in the atmosphere. (Figure 5).

Signal duration is more important than signal intensity, because it is related to the magnitude of the meteor and the population index of the meteor shower. Obviously in such a case, a preliminary careful check of the records to eliminate all false detections due to disturbances was a prerequisite to obtain a good result (Figure 6). 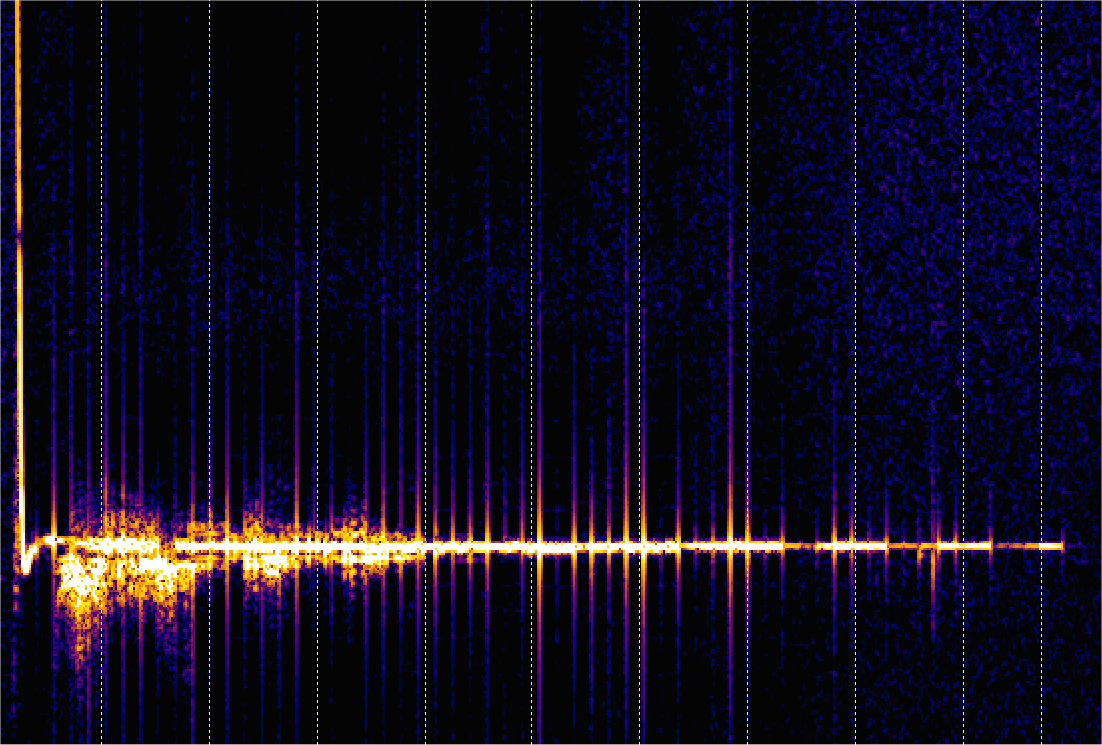 Figure 6 – Radio spectrogram of a hyperdense meteor with head echo. The mobile plasma echo is followed by the diffuse part of the trail turbulence. In this case a strong spurious disturbance signal is superimposed on the persistence of the trail.

In addition to this, one of the objectives that radio observation and video observation of meteors have in common is the search for simultaneous events (Figure 7).  In order to reach this study objective, we tried to involve other Italian radio stations and the video stations of the Italian Meteor Group (http://meteore.uai.it/), in order to create a database from which the events observed in common could be identified.

Lastly, it happened every now and then that passages of satellites, or rather sections of their path, are detected when the reflection geometry of the signals becomes possible for the receiving station (Figure 8 left) and this with the same system with which the meteor echoes are recorded. A further interesting application of the radio meteor detection was the study of the transits of satellites during the re-entry phase (http://www.astrovenezia.net/radio_meteore/2018/20180325_0124_soyuz_reentry.htm), in order to obtain information on the flight speed and their status (Figure 8 right). 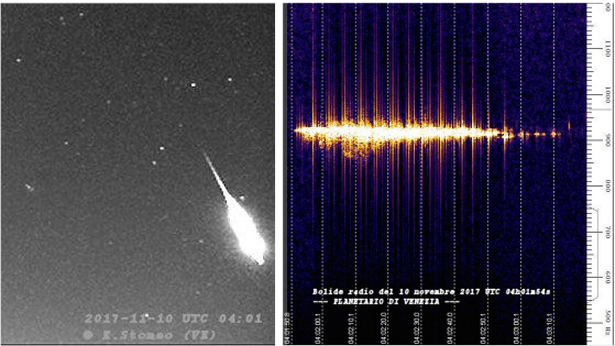 Figure 7 – Bolide recorded on November 10, 2017, resulting in a radio echo persisting for several seconds in the atmosphere. 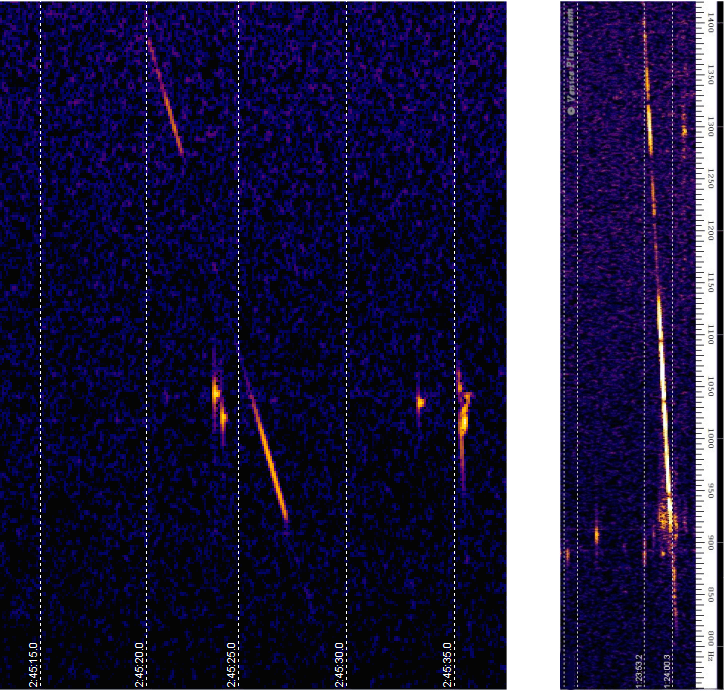