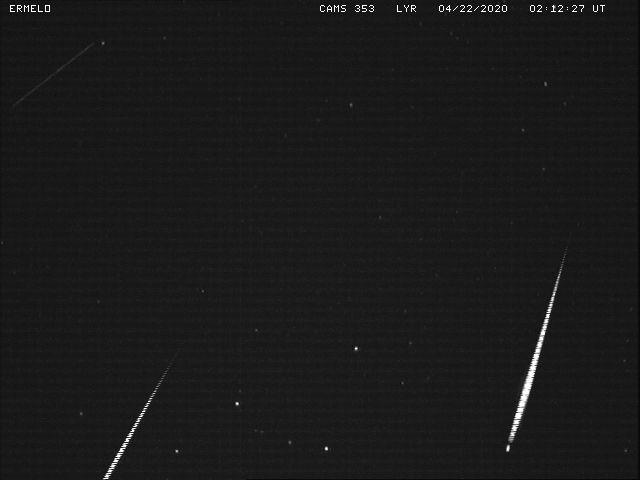 Introduction
Due to climate change, winters in western Europe are becoming softer, wetter and cloudier, while spring has become drier and sunnier in recent years. As in 2018, April in 2020 excelled in many clear nights with record numbers of hours of sunshine during the day. The author was able to observe for 7 nights. For the Lyrids, the maximum was expected to take place around 08:00 UT on April 22, 2020. But this could also be many hours earlier or later [1]. I made a report of all observing activities.
Air traffic has decreased considerably thanks to the covid-19 lockdown imposed in the Netherlands and much of the rest of the world. This was also noticeable at the starry sky by the low numbers of aircrafts that were visible, but also there was by much less cirrus and dust in the atmosphere. The nights in which it was clear were therefore very transparent! The first clear moonless night was Wednesday/Thursday night 15/16 April.

The featured image above this article is a composition of two bright Lyrids captured with one of the four CAMS systems at my home. The brightest one was captured on April 22, 2020 at 02:16 UT, the other one at 02:12 UT with the CAMS 353 camera.

15/16 April 2020
This night I was observing from the meteor roof at home and observed between 00:22 and 02:53 UT. A cold night: the temperature on the roof dropped down to 3 degrees Celsius. Initially beautiful transparent sky, but from 02:05 UT onwards thin cirrus moved through the field of view from the south, causing the limiting magnitude to drop from 6.3 to 6.1 (SQM decreased from 20.16 to 20.08). In April, there is usually not much meteor activity, except for the Lyrids, of course. Thanks to the very clean and dry air now some more meteors visible, in 2.50 hours effective observation time I counted 23 meteors, including my first two Lyrids (+3 and +1 respectively) of this year. The most beautiful meteors were the +1 Lyrid and a bright red +1 Antihelion with a long wake. Furthermore, a double satellite of the type NOSS or its Chinese clone was seen.
Nights 16/17, 17/18 and 18/19 April were clear, but there was often haze or cirrus passing over. However, in the predictions of the KNMI (our Dutch weather institute) we could get a series of beautiful clear nights in the week of the Lyrids maximum. In other words, comparable to 2018. Indeed, it cleared up nicely on Sunday 19th April. I also decided to take one day off from work on Wednesday April 22 so that I could observe the Lyrids extensively that night.

April 19/20, 2020
During the coming nights I would observe from the Groevenbeekse Heide. When I cycled to the heath around 23 UT, I saw that the sky was crystal clear. A relatively large number of stars could also be seen low on the horizon. The session started at 23:12 UT and continued until dusk until 02:50 UT. The limiting magnitude was 6.4. That was a top value for this location, the SQM was around 20.47. The hourly counts were good with 8 (1.00 hours), 13 (1.00 hours) and 11 (1.383 hours) meteors. The Lyrids were only very sparingly present, only three were noticed. Also, few bright meteors, at 1:44 UT a sporadic +1 in Cepheus with a short persistent train was the brightest meteor. So, in total 32 meteors, of which 4 ANT, 3 LYR and 25 SPO. This night was also a bit chilly; the temperature went down to 3 degrees Celsius at clog height.
From 01:13 UT onwards, satellites regularly appeared low in the southeast, which followed roughly the same track. These were the starlink satellites I imagined; I saw them for the first-time during observations. First there was one satellite every 3 or 4 minutes, but from 01:56 UT entire groups became visible. Sometimes 6 were visible at a time with a distance of 5 or more degrees. Brightness around magnitude +2 a +3. It was also clearly visible how the satellites floated out of the Earth’s shadow and that this happened increasingly earlier as a result of the rising sun. From 2:15 UT they also rose and moved through my field of view. Fortunately, now again in smaller numbers.

Again a very dark clear night with Lm 6.4 and a SQM that even went up to 20.55! That was almost the record of this location from 2018, when I reached 20.65 once. A bit shorter session because I still had to work that day. In the evening, two meteors were captured by the all sky camera.

Figure 1. Part of the fish eye image of the Earth grazer captured in twilight with the all sky camera on April 20, 2020 at 19:55 UT. The image has been heavily edited to make the meteor more visible. Camera: Canon 6d with Sigma 8 mm F 3.5. The shutter was set to 16 breaks per second.

Between 00:13 and 02:50 UT I counted 31 meteors. The Lyrids finally gained some strength this session with resp. 3 (Teff 0.867 hours), 5 (Teff 0.917 hours) and 6 meteors (Teff 0.817 hours). So, in total 14 LYR, 1 ANT, 1 ETA and 15 SPO. For several years, observers such as Michel Vandeputte and Jurgen Rendtel have sometimes observed eta Aquariids around the Lyrid maximum. That is why I keep going a little longer during the twilight. This time it worked: a +3 ETA shot through Bootes.

Fortunately I also saw some beautiful meteors this night:
01:18 UT: a nice magnitude 0 orange Antihelion in Bootes.
01:45 UT: +1 Lyrid with a short persistent train in the Big Dipper.
02:12 UT: +1 Lyrid in Cassiopeia.
During the second hour, occasional Starlink satellites (I call them Mosquitos) were seen low in the southeast. However, during the third hour, a stretched starlink train passed right through my field high in the southeast. The satellites were very bright, approximately magnitude +1 a +2. Sometimes 6 were visible at the same time, I saw 25 in total. If you followed the satellites with your eyes, this combined with the dark and clear starry sky gave a sort of 3D effect. However, it is also a significant concentration-breaker for the observation. I cannot rule out missing some (weak) meteors because of these satellites.
But, all in all a nice night. Thanks to the fairly strong east wind, the temperature remained around 6 degrees.

April 21/22 2020
Yes! The Lyrids have their maximum this night and the sky was clear and I was free from work the 22nd and 23rd of April! That meant a long session from the heath. I could observe from 22:30 to 02:50 UT. The quality of the sky was slightly less than the 2 previous nights. This was mainly due to the somewhat lighter sky background. Limiting magnitude again 6.4 and a SQM that sometimes reached at 20.45. Only after fifteen minutes I saw my first Lyrid, but quickly after that more Lyrids followed. The Lyrid counts went up from 8 to 17 an hour, so everything went very well. This time also a bit more bright meteors appeared:

A total of 83 meteors are actually seen in 4.20 hours, of which 47 LYR, 5 ANT, 1 ETA (Mv +2 with persistent train) and 30 sporadic meteors. Also this night a Starlink train was visible. This time they moved through the zenith reaching magnitude 0 a +1! And by temporarily keeping my field of view a little lower I largely kept them outside the FOV.

It was very nice on the heath, especially at the end of the sessions. Jupiter, Saturn and Mars were low in the southeast, Scorpius in the south-southwest. The Milky Way was beautifully visible between Cepheus and Sagittarius. The first bird sounds were audible. Nature awakened, always a beautiful moment! The wind blew through and ensured that the temperature did not dip below 7 degrees. Nevertheless, the author was quite cold after this session!

April 22/23, 2020
During the day the sky was bright blue again. I was curious what the Lyrids would deliver. After all, the maximum was expected on April 22 during the day. So, this night a bit more bright meteors and declining activity were expected. Due to fatigue, I decided to start a little later at 23:00 UT. Again, a dark sky (and better than the previous night!), Lm 6.4 and SQM 20.50. The wind blew a little less hard. The Lyrids indeed showed less activity, but relatively more bright ones. During the night of April 21/22 I estimated most Lyrids were magnitude +4, now that was the magnitude +3 class. The Lyrid hourly counts were as follows:

So, after 1:00 UT decreasing activity. The brightest meteors appeared at:

A total of 59 meteors were seen, of which 28 LYR, 5 ANT, 0 ETA and 26 SPO. The average magnitude of the Lyrids was 0.6 magnitude lower this night than in the previous night. This was another beautiful session. This was followed by 2 nights with a lot of cirrus and clouds.

April 25/26, 2020
This night however, the sky was clear again! I had overslept, so I started an hour later than planned. Lm was 6.4 again and SQM rose again to 20.50. Transparency was excellent and because the wind had disappeared, the temperature could drop to -7 degrees Celsius at clog height! Few Lyrids this time, only 2 meteors. In total, 19 meteors were seen in 2.25 hours effective, of which 2 LYR, 3 ANT and 14 SPO. In the last hour low fog banks appeared here and there.

April 26/27, 2020
This was the last night in a beautiful series of clear nights. The Moon would soon be disturbing but the weather would also become more changeable after 6 dry weeks. I could observe 3.2 hours. Lm 6.4 and SQM 20.46 at maximum. Only 1 Lyrid was seen. Two ANT meteors were striking. The first one moved on the Virgo / Bootes border and seemed to come more from the Spica area. But because the ANT radiant is very large, I keep it on an ANT. Shortly afterwards, a slow 0 ANT appears just above Scorpius. A rather long track. In retrospect, it appeared that these two meteors belong to the h-Virginids which radiant is to the left of Spica. In total I see 24 meteors this night, 1 LYR and 3 ANT (2x h-VIR). This source of meteors was more active than in previous years according to CAMS observations.

The Leonids in the off-season part 2. 2018: two small outbursts?