News from the meteor library: dust trail of a major bolide

Satellite observation of the dust trail of a major bolide event over the Bering Sea on December 18, 2018

This article has been submitted and accepted for publication in Astronomy & Astrophysics by J. Borovička, M. Setvák, H. Roesli, and J. K. Kerkmann.

Abstract: Context. One of the most energetic bolide events in recent decades was detected by the US Government sensors (USGS) over remote areas of the Bering Sea on December 18, 2018, 23:48 UT. No ground-based optical observations exist.
Aims. Using the satellite imagery of the dust trail left behind by the bolide, we tried to reconstruct the bolide trajectory. In combination with the bolide speed reported by the USGS, we computed the pre-atmospheric orbit. Observations in various spectral bands from 0.4 µm to 13.3 µm enabled us to study the dust properties.
Methods. Images of the dust trail and its shadow obtained from various angles by the Multi-angle Imaging SpectroRadiometer (MISR) on board the Terra polar satellite and geostationary satellites Himawari-8 and Geostationary Operational Environmental Satellite 17 (GOES-17) were used. The initial position and orientation of the trail was varied, and its projections into the geoid coordinate grid were computed and compared with real data. Trail motion due to atmospheric wind was taken into account. Radiances and reflectances of selected parts of the dust trail were taken from the Moderate-resolution Imaging Spectroradiometer (MODIS) on board Terra. Reflectance spectra were compared with asteroid spectra.
Results. The bolide radiant was found to be 13° ± 9° from that reported by the USGS, at azimuth 130° (from south to west) and zenith distance 14°. The bolide position was confirmed, including the height of maximum dust deposition around 25 km. The incoming asteroid had to be quite strong to maintain a high speed down to this height. The speed of 32 km/s, reported by the USGS, was found to be plausible. The orbit had a high inclination of about 50° and a perihelion distance between 0.95–1 AU. The semimajor axis could not be restricted well but was most probably between 1–3 AU. The dust reflectance was much lower in the blue than in the red, consistent with the material of A- or L-type asteroid. The absorption at 11 µm confirms the presence of crystalline silicates in the dust. 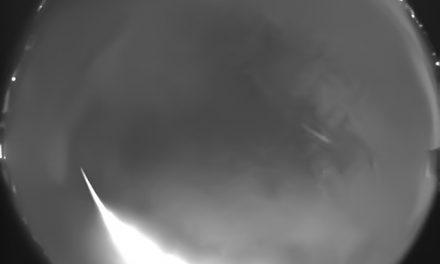