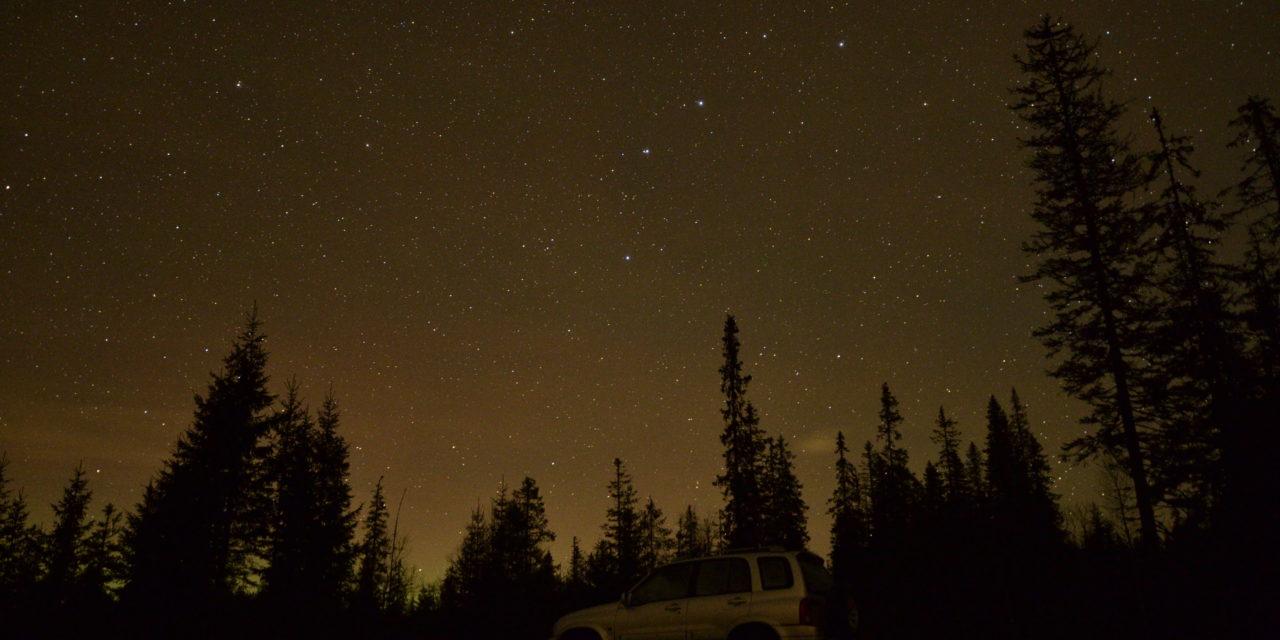 November is usually a month dominated by clouds and fog at my homeplace in eastern Norway. So also this year, but the author was able to conduct 3 observing sessions during the Leonid shower. A total of 9,10 hours of effective observing time was yielding a total of 117 visual meteors, and 21 meteors photographed with my DSLR camera. An overview of my observation each night is given.

The one-week weather forecast for the maximum of the Leonids did not look good this year. As maximum approached it became clear that the night of November 16/17 would be clouded out. The same story was seemingly about to happen to November 17/18, when a short possible clearing around midnight appeared in the weather charts. The clearing came as predicted, but fog created by lakes in the lowlands, was pushing up against my observing site at 460 meters altitude. I decided to jump in my car and drive to an alternative observing site at 630 meters altitude. This proved to be a right decision, and I was able to start observing at 21:35 UT, with the Leonid radiant very low in the eastern sky.

I had no expectations for the Leonids this first hour, due to the low radiant position. Anyway, I was hoping that good sporadic rates, and maybe some Taurids would be possible under the good sky conditions at this observing site. In the second minute of observation a +2 magnitude NTA lit up just west of the Pleiades. 4 minutes later a +6 mag SPO confirmed the good observing conditions, before a 5 mag NTA was slowly gliding towards Beta Tauri. Satisfied with the start, I suddenly became aware of a long pathed, 0 mag meteor streaking quite slowly from the eastern horizon through Ursa Major. No doubt this was an earth grazing Leonid, and it left a smoke train hanging in the sky for about 3 seconds!

The sporadics continued in a steady flow, and at 22:01 a nice slow moving 0 mag SPO appeared in the outskirts of my observing field. 15 minutes later an even brighter -1 mag SPO started out in Ursa Major and glided slowly into Draco. At the end of the period, two weak Southern Taurids of mag 4 and 5, added to the activity from the Taurid complex.

The clearing was supposed to last for 2 to 3 hours, so I was hoping for at least one more hour of clear skies. Another exciting factor was whether the rising Leonid radiant would lead to more activity from this source. I had to wait just 5 minutes before the Leonids proved to be alive and kicking! At 22:40 a yellow -2 mag Leonid was streaking from Leo Minor all the way into Cassiopeia, leaving a clear smoke train for at least 5 seconds! Then a quiet period followed with no meteors seen the next 15 minutes. Some dispersed lower clouds also appeared near the horizon, together with a thin layer of higher clouds in parts of the sky, making a slight deterioration of the observing conditions.

Despite this, a more active period started just before 23:00 with a couple of sporadics, a +6 mag NTA and 2 Leonids of mag 3 and 4 in just 5 minutes! A +2 mag November Orionid glided through Gemini at 23:08, followed by some more sporadics towards the end of the period. At this time clouds had moved in, making serious meteor observations difficult. While packing down my observation gear, I still saw a couple of Leonid meteors through gaps in the clouds, giving a testimony of higher activity towards the morning. 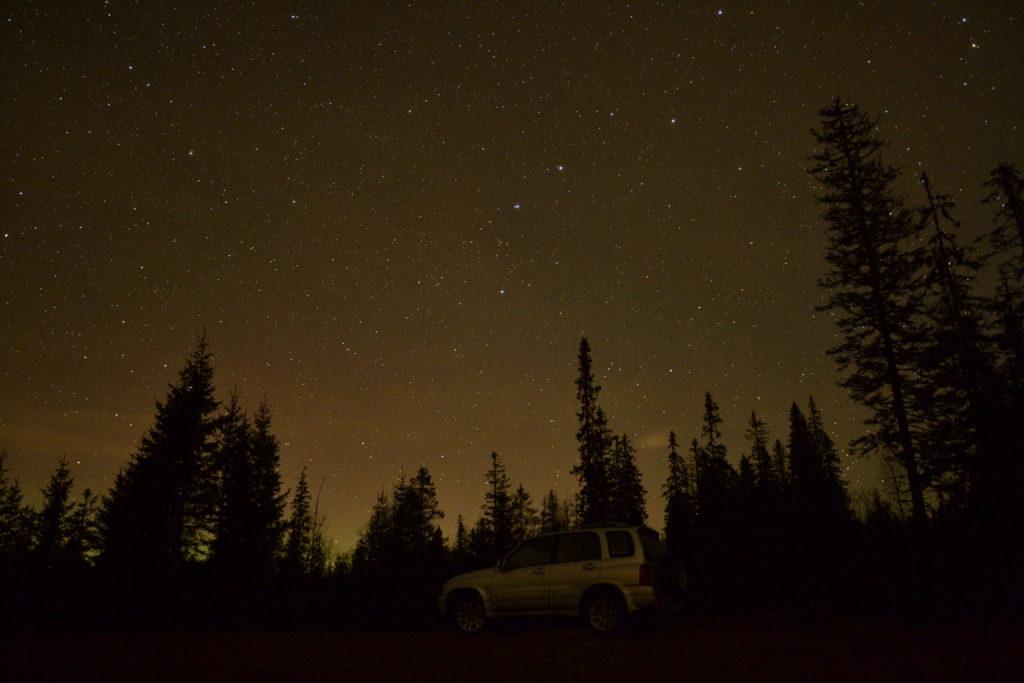 Picture taken from the observation site at 630 metres height at Gullenhaugen after ending observations on November 18. Skies still clear in the northern horizon, but clouds quickly moving in from south-west.

A small but elusive high pressure system was suddenly appearing over the southern parts of Norway on November 19. The uplifting weather forecast made me go to bed early, planning to get some early morning observations before going to work the next day. After some hours of good sleep, I was out in the observation field and ready to start observing at 01:25 UT. The session was initiated with a couple of sporadic meteors, before a nice +1 mag November Orionid lit up in Auriga eight minutes into the period. Another eight minutes went by before the first Leonid of the night, a +3 mag in Ursa Major appeared. This was followed by a nice +2 mag Northern Taurid the next minute, before a beautiful yellow +1 Mag Leonid streaked into Auriga six minutes later.

This ignited a really active period with a lot of bright meteors! At 01:52 a white +2 mag Leonid shot into Ursa Major. Two minutes later two sporadic meteors of mag +1 appeared nearly simultaneous, one in Ursa Major and one in Gemini. Then it was time for the Leonids to show some muscles! At 01:56 a yellow -2 mag Leonid lit up in Ursa Major, leaving a smoke train for several seconds! This was the fourth Leonid of the hour, showing that the Leonids still is able to produce decent activity two nights after maximum. The hour was rounded off with some weaker sporadics and a +5 mag NTA, leaving the sporadic rate of the hour at 12 meteors.

The next hour started with a nice +2 mag Leonid two minutes into the period. After a flying start, activity started to decline. The action with bright meteors from the first hour was over, but the Leonids still produced two more meteors of mag +3 and +5. Also, the Taurid complex and the November Orionids went into hibernation this hour, with no meteors seen. The sporadic activity was still decent but declining to 9 meteors of mostly weaker magnitudes.

First out this hour was a white, slow moving, +2 mag NTA in Leo. Second later a yellow, fast moving sporadic of mag +1 appeared in Ursa Major. Two minutes later the Leonids had a final show of force, with a beautiful, yellow, -1 mag meteor in Draco. The hour continued with two nice +1 mag meteors from the NTA and NOO respectively. The Leonids produced two more +3 mag meteors during the hour, and the sporadic rate ended at 8 meteors. A successful 3 hour session had come to and end, showing that the Leonids were still quite active and able to produce some really bright meteors! A total of 45 meteors were seen in 3.03 hours of observation, and 8 meteors were photographed with my DSLR camera.

Another clear night was predicted in the weather forecast, and I was eager to see if the Leonids still could have some surprises. Arriving at the observation field, I became aware of some drifting clouds and a weak northern light making the sky conditions a little worse. I was anyway able to start observing 23:45, but it soon became evident that meteor activity was weak. Only 4 sporadic meteors were seen this first hour, all in the magnitude range +2 to +4. No meteors were seen from the Leonids, but the radiant was still quite low in the sky. Two meteors were seen from the Taurid complex, together with one AMO of mag +5. This sums up a rather dull first hour, where the drifting clouds alone can not explain the low sporadic activity. 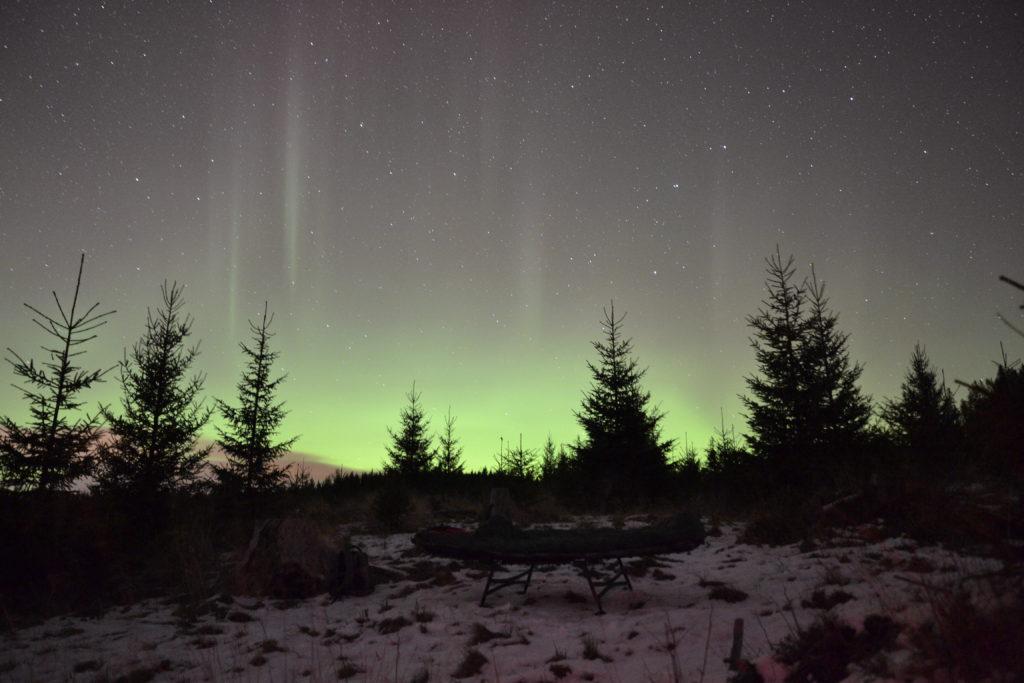 Picture taken at the start of my observing session on November 21, showing the Northern lights and some clouds threathening in the horizon.

At the start of the second period the drifting clouds had disappeared from the observation field, and I was hoping the activity would pick up a bit. After a while it was clear that activity was still on the dull side with mainly faint meteors. The two Taurid branches produced one meteor each, and the AMO and NOO showers also came in with one +4 mag meteor each. The climbing Leonid radiant resulted in two meteors of mag +4 and +5. The hour was rounded off with the highlight of the hour, a beautiful, yellow, slow moving, 0 mag sporadic meteor in Ursa Major.

In the third hour some drifting clouds were back again, but not more than that useful observations could be carried out. First out was a nice +1 mag NTA in Ursa Major, followed by some weaker sporadics and a +5 mag STA. Half an hour into the period the first +4 mag Leonid appeared, with another +4 mag following 20 minutes later. The Northern Taurids made a good impression this hour with 3 meteors, and the sporadic activity ended at a more decent number of 8 meteors.

The last hour confirmed the general low sporadic activity of the night with 5 meteors. The Leonids made a decent appearance with 3 meteors, with the highlight being a yellow -1 mag near Procyon. Despite some frustrating periods with clouds and low meteor activity, another successful session had come to an end. A total of 42 meteors were observed in 4.07 hours of observation, and 11 meteors were photographed with my DSLR camera.