Abstract: The IAUMDC meteor shower database (SD) is confusing for several of the meteor showers (Koseki, 2020).  This paper presents the catalogue of clearly recognized meteor showers recorded by SonotaCo net video observations in the period 2009–2018 (SonotaCo, 2009).

The most important cause of the existence of undetectable meteor showers in the SD is the difference in definition of what is a meteor shower.  There is no common and clear conception and that is why the list includes many false meteor showers. It is not possible to make an absolute distinction between meteor shower activities and the sporadic background.

Radiant points are described in equatorial coordinates usually and their radiant drifts are given as Δα and Δδ as well.  But, if we use ‘Sun-centered ecliptic coordinates’ to plot radiant points, we can almost eliminate the radiant drift during a week.

Figure 1 shows the star map in equatorial coordinates plotted in Hammer projection centered at (α, δ) = (0°, 0°).  The equator is on the x-axis and the ecliptic is shown with a yellow line.  Figure 2 shows the star map in ecliptic coordinates centered at the equinox, that is, (λ, β) = (α, δ) = (0°, 0°) and the ecliptic plane is now on the x-axis in turn.  The position of the Sun at the time of the Orionids maximum is drawn in Figure 2 as a red circle; a black circle for ANT and a black cross the APEX are added.  The Earth moves around the Sun and we see the Sun moving along the ecliptic; the ANT and the APEX also move and the meteor shower radiants drift as well.  If we set the position of the Sun as the origin, then the ANT, the APEX and the radiants become fixed.

Figure 1 – An equatorial star chart plotted in Hammer projection centered at (α, δ) = (0°, 0°). The red line is the equator, the yellow line is the ecliptic.

Figure 3 shows such star map at the time of the Orionid maximum with the position of the Sun as the origin, which is called Sun centered ecliptic coordinates (λ–λʘ, β).  The reason why the center of Figure 3 is centered at
(λ–λʘ, β) = (270°, 0°) is the distribution of the meteor shower radiants; Figure 4 shows all the SD radiants.

The movement of the Earth around the Sun plays an important role in the distribution of the meteor shower radiants. It is very common to set the center of such figures at (λ–λʘ, β) = (270°, 0°).  We can easily point the major showers which include several entries in the SD as the crowded marks in Figure 4.  It is very clear that the Sun-centered ecliptic coordinates plot centered at (λ–λʘ, β) = (270°, 0°) is very suitable to show the radiant distribution over the entire sky. These coordinates correspond with the observed radiant distribution for the center of each meteor stream activity as shown in the meteor shower datasheets.

DR = 1 means that the radiant density is flat, with other words, no shower activity.  We can assume there may be some activity suggested when DR > 2.  The author has searched every line of the SD by using DR and selected several shower activities with DR > 5 at their maximum.

4.1 Selection of the proper radiant position and the solar longitude of the activity

It is logic to select the entry in the SD which gives the highest density ratio DR value, as the candidate for the start of the calculation, but the SD has no information on the activity period.  The author has drawn the meteor activity profiles according to the value of DR and got the required period for the calculation.  It seems to be good to explain the process by showing KCG as an example; we select 0012KCG04 in this case.

4.2 Calculation of the distance from the selected point (center): Radiant distribution and the profile

We calculate the distance from the selected point expressed in (λ–λʘ, β) and draw the radiant distribution between 12 degrees earlier and later from the selected solar longitude of the activity in the case of KCG (see Section 6 ‘Explanation of the meteor shower datasheets’ as well as the datasheet for the KCG).  Figure 6 shows the same KCG data in the Sun-centered ecliptic coordinates centered at
(λ–λʘ, β) = (161.5°, 71.9°) and then the elliptic shaped distribution becomes smaller.  We should represent the radiant point in Sun-centered ecliptic coordinates (λ–λʘ, β) not in equatorial coordinates (α, δ). The y-axis runs through the selected λ–λʘ value, which is, 161.5°. The scale is in degrees.

We could move on to ‘4.4 Calculation of the linear regression of λ–λʘ and β on λʘ’ for the usual cases but the situation with the KCG is special; it is better to explain the process for such a special case.

4.3 Calculation of the radiant distribution around the estimated center

The radiant distribution in Figure 7 appears still elongated which is often the case.  This ellipse shape means that the radiant shifts during the activity period of Δλʘ = 12°, although the elliptic shape of the radiant distribution can be natural in some cases.  We test whether the radiant drift is real by calculating the preliminary linear regression of x and y in function of λʘ, in the case of the kappa Cygnids (KCG) and some others we use x’ and y’ instead of x and y.  Because the radiants are dispersed by the drift itself and because the selected radiant point is tentative, we select the radiant data within a distance of 3 degrees from the center, Δr < 3° is most common for the usual cases.  We calculate the linear regression for the period of Δλʘ earlier or later than the selected λʘ. Both values Δr and Δλʘ are shown in each meteor shower datasheet. If we would calculate it for a longer time span, the results might be dispersed by the uncertainty of the tentative data.  Figures 8, 9 and 10 show the linear regressions of x’, y’ and vg for KCG at the first step of the iterative approach.

Figure 8 – The linear regression of x’ in function of λʘ.

Figure 10 – The linear regression of vg in function of λʘ.

4.4 Calculation of the radiant drift

We use the first linear regression described in point 4.3 to estimate the radiant drift and to calculate the distance from the estimated radiant drift for every radiant as shown in Figure 7.  We continue to regenerate similar regressions as shown in Figures 8, 9 and 10 by adding and removing radiant points until the regression results for x and y (x’ and y’ in case of KCG) converge in this iterative approach. We ignore the result for vg, because it has no significant effect on the final result.  Figures 11, 12 and 13 show the result of the 10th and final regression for the kappa Cygnids (KCG).  The radiant distribution becomes more compact (for an example see Figure 14) and we can easily convert the radiant drift (x, y) or (x’, y’) into (λ–λʘ, β) and (α, δ) coordinates (see also the KCG sheet).

Figure 11 – The linear regression of x’ in function of λʘ.

Figure 12 – The linear regression of y’ in function of λʘ.

Figure 13 – The linear regression of vg in function of λʘ.

We can select the possible shower members using two conditions:

The selected radiant points show a change in time, expressed in solar longitude λʘ.  In order to include more candidate shower radiants, the iterative procedure with linear regressions is applied until the iteration converges.  We calculate the linear regression of (λʘ, x) and (λʘ, y) where (x, y) are the coordinates of the radiant distribution centered at the shower radiant which is the origin shown in Table 3 and explained in Appendix 1. The y-axis runs through the origin λ−λʘ (scales are in degrees).

Table 1 lists the basic results of this survey. The column headings of this table are as follows:

Table 1 – The list of 82 meteor showers presented in the datasheets; column headers see above. Click on the code or name of the shower to view the datasheet for this shower.

Appendix 1: Calculation of radiant drift by using the regression data

It is useful for the readers to show an example of the EXCEL program to get the radiant coordinates from the radiant drift analysis.  The Excel sheet is shown in Figure 15. First you must copy the regression parameters from Table 3 in the input cells marked in red in Figure 15.  The Excel formulae for the computed cells are as follows:

6  Explanation for the meteor shower datasheets

The first lines describe the initial data for the iterative search like given in Table 3, not the final results listed in Tables 1 and 2. For some meteor showers there is an extra comment added. The shower code in the shower database is mentioned with its number between parentheses.

Figure 16 – An example of a meteor shower datasheet, in this case for the c Andromedids (CAN#0411).

It has been said we cannot get a general view of a meteor shower until we have completed twelve years of observations. The Moon moves twelve and one third times a year around the Earth and we can observe a meteor shower without lunar obstruction once in three years. The Earth moves around the Sun in 365 and one quarter days so that we encounter a different part of the meteoroid stream every quarter of a day and we need to wait four years until we can observe the same part of the shower activity. 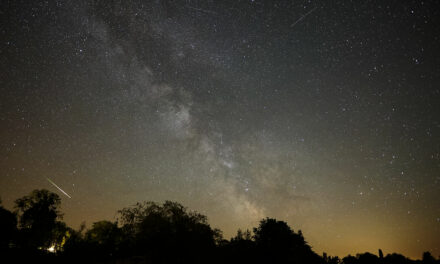 Spring 2021 observations from Ermelo (the Netherlands) and Any Martin Rieux (France). 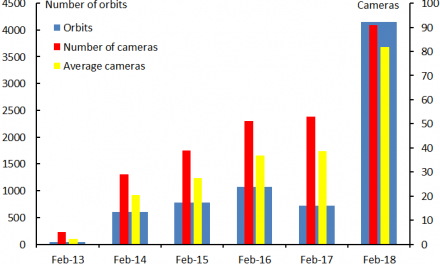