Abstract: On March 22, 2021, CAMS networks again detected the zeta Pavonid meteor shower (ZPA, #853), now demonstrating that it has an unusually short duration. The full-width-at-half-maximum duration is only 0.46 degrees in solar longitude. The peak was at median solar longitude 1.41 degrees in 2021, 1.25 degrees in 2020 and 1.15 degrees in 2016 (equinox J2000.0). The short duration of the shower and the long-period orbital elements of the meteoroids suggest they originated from a long-period comet that passed close to Earth’s orbit in the past.

Short lived activity of the zeta Pavonids (ZPA, IAU shower number 853) was recorded by CAMS networks in 2021 (Figure 1). Because such brief showers can give approximate orbital elements of a yet-to-be-discovered potentially hazardous long-period comet, a CBET was published (Jenniskens, 2021). The shower was first detected in 2016, when CAMS New Zealand triangulated 5 meteors with this radiant (Jenniskens et al., 2018).  Weather prevented observations in 2017-2019. 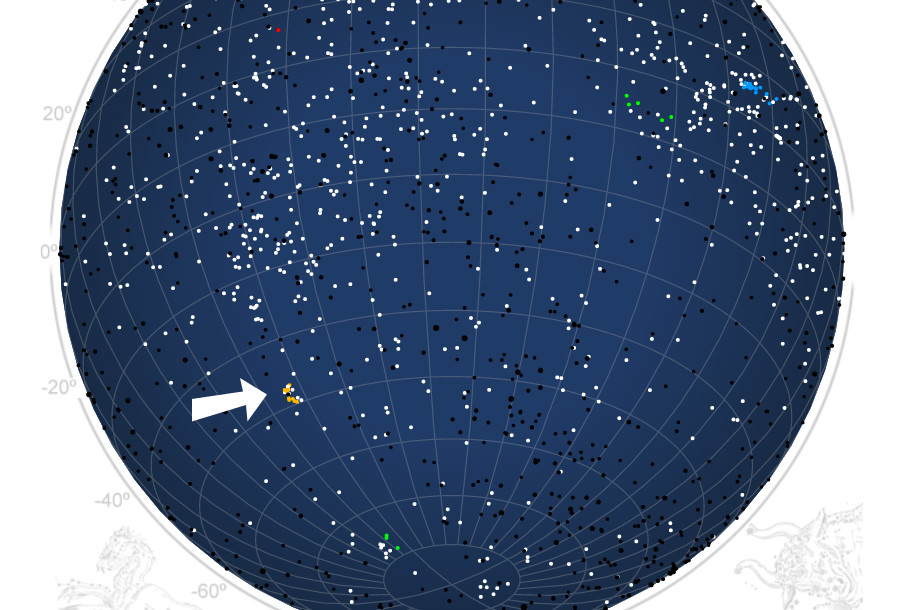 CAMS networks in the southern hemisphere were expanded in mid 2019, so that a more continuous monitoring of southern hemisphere meteor showers has become possible since. In 2021, six zeta Pavonids were triangulated by CAMS Namibia (T. Hanke, E. Fahl, and R. van Wyk, involved with the H.E.S.S. Collaboration), six by CAMS Chile (S. Heathcote and T. Abbott, AURA/Cerro Tololo, and E. Jehin, University of Liege), three by CAMS Australia (M. Towner, Curtin University, with support of Linda Toms and Carol Redford), and two by CAMS South Africa (T. Cooper, Astronomical Society of  Southern Africa, and P. Mey, South African Radio Astronomy Observatory). No zeta Pavonids were triangulated the night before or after.

The shower was detected between 2021 March 21, 19h, and March 22, 11h UTC, corresponding to solar longitudes 1.11 to 1.73 degrees (equinox J2000.0). Based on the median value and dispersion of the solar longitude of 17 triangulated meteors, the shower’s activity profile had a full- width-at-half-maximum duration of only 0.46 degrees centered on 1.41 deg solar longitude. This is one of the first meteor showers to peak in the new Solar Longitude year.

Orbital elements are those of a long-period comet with semi-major axis close to the parabolic limit. The median orbit is slightly hyperbolic, but spread over bound and unbound orbits, with orbital elements a strong function of the measured entry speed. The orbit becomes parabolic for an entry speed of Vg = 55.6 km/s. The best-fit parabolic orbit is compared with the previously known orbit from 2016 in Table 1. There is no known parent body.

It is unclear at present if the activity itself is unusual or returns annually. The shower was also detected by the same networks in 2020, when 10 meteors were triangulated centered on 1.25 degrees solar longitude. In addition, one meteor occurred in the night before the peak, one meteor in the night after in 2020. In 2016, the 5 observed meteors centered on 1.15 degrees solar longitude (Jenniskens et al., 2018). Planetary perturbations are expected to move the peak activity slightly from year to year.

Note: †) Parabolic orbit that is a best match to the observations.

The duration of the shower is interesting, because it is wider than that of the 1-revolution dust trail encounters with dust from comet Kiess, for example, but narrower than most known annual long-period comet showers like that of the April Lyrids (Jenniskens, 2006).

The long orbital period of the meteoroids suggests this meteoroid stream might have originated from a new comet that fragmented during a past return to the inner solar system. The meteoroids may have completed more than one orbit or we are passing the center of the stream at a large miss-distance. If so, this shower should be monitored for possible meteor outbursts from passing the 1-revolution dust trail. If there is a 1-revolution dust trail on top of this activity, then the comet parent body might still exist and return to the inner solar system on an orbit that passes close enough to Earth’s orbit to intersect. Such outbursts are expected to happen only once or twice every 60 years.