Abstract: Low-light video observations show a compact but weakly active meteor shower with a radiant situated in the constellation of Corvus around February 16 in recent years. This newly identified shower has been listed in the IAU Working List of Meteor Showers as the February alpha Corvids (FAC #1101). The meteoroid stream responsible is in the orbit of an unknown long-period comet that passed close to Earth’s orbit in a prior return to the inner solar system.

A weak but unusually compact meteor shower (Figure 1) was added to the IAU Working List of Meteor Showers, now called the February alpha Corvids, and given the code FAC and the number 1101 (Jenniskens, 2021). The shower is significant because it marks the orbit of an unknown long-period comet that passed close to Earth’s orbit in a prior return. If part of the nucleus survived when the stream was created, it might now be a potentially hazardous comet when it returns to the inner solar system. 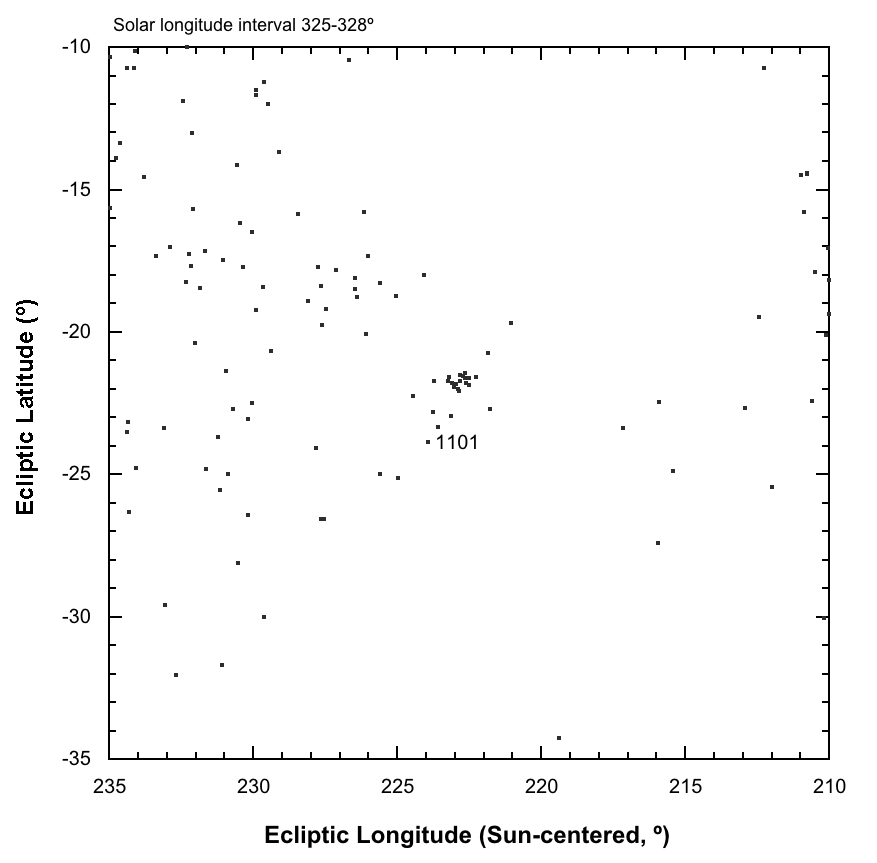 Because the radiant is so compact, this weak shower can be recognized also in other low-light video data back to 2011.  Using the parabolic orbit above, Paul Roggemans searched in a dataset with 191,393 orbits collected by the Global Meteor Network and a dataset with 630,402 UFO-software orbits (EDMOND and SonotaCo). This search resulted in 20 similar orbits registered during the time interval λʘ [318.8°, 331.6°] or February 7–20 from a Sun-centered radiant in geocentric ecliptic coordinates at λg-λʘ [221.7°, 226.9°] and βg [–23.9°, –18.1°] within a geocentric velocity range vg = [51.6 km/s, 57.6 km/s]. Omitting 4 outliers the mean orbits for UFO software and for Global Meteor Network orbits were calculated using the method described by Jopek et al. (2006). The results are compared in Table 1 and are in good agreement with the CAMS data.