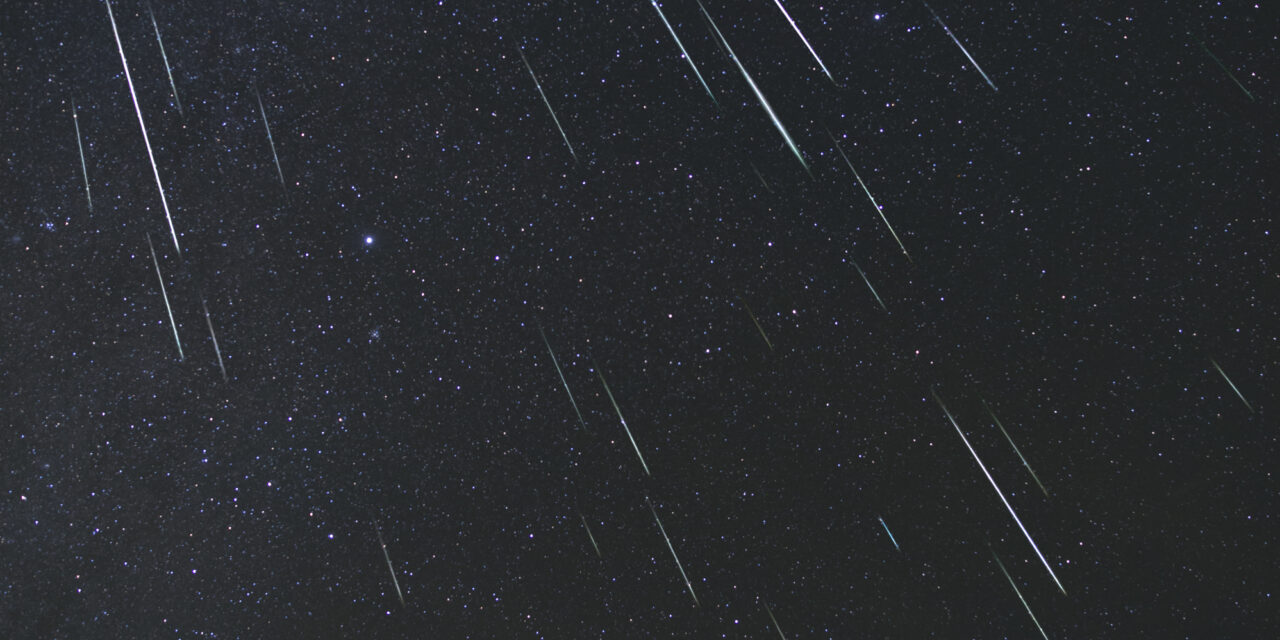 An analysis of visual observations of the Geminids in 2020 is presented. The maximum activity was expected to take place above Europe. Indeed, there was a peak in activity around solar longitude 262.14 degrees, but with a ZHR of 90 ± 4 it was remarkably low.

The 2020 Geminid observational campaign was long awaited. Not only was the maximum was predicted for Europe, but 2020 also fell nicely in the comparison series 1996–2004 and 2012. Unfortunately, the Corona pandemic also severely hit Europe, making all kinds of large-scale movements almost impossible. Borders were closed, planes grounded and so the options to move to clear weather slowly but surely dried up. For the author and a number of Dutch observers, this meant waiting to see whether it would become clear in the Netherlands or not. Unfortunately, as so often in December, the weather did not cooperate. Almost nothing has been seen from the Benelux around the Geminid maximum. But the weather conditions were also poor in the rest of Europe, here and there people could benefit from small-scale clear sky periods. The observers in Israel were better off in that regard and were able to observe extensively on the nights of December 12–13 and December 13–14. There hasn’t been much observed on the American continent either. So, there was not much hope for a good analysis. Fortunately, it turned out that the latter was not so bad and that nice results were still achieved.

On the IMO website, 7445 Geminids were reported by 50 observers. The author of this article received another observation with 169 Geminids. See Table 1 with all the observers who observed the Geminids in 2020.

All data was pre-checked on the following points:

To determine the population index r you must have enough meteors available per time unit. For the nights before December 12, it is therefore only possible to determine a population index r per night. For 12–13 December periods of a few hours could be used and around the maximum there was enough data for every hour.

To calculate the population index r, the observation data must meet two criteria:

The Geminids are also known for short-lived periods with many fireballs. This can be quite spectacular for an observer. For example, in 2007 the author and some observers saw 22 Geminid fireballs with magnitudes between –3 to –8 within hours (Miskotte et al., 2010; 2011; Vandeputte, 2008)!

Table 1 – List of observers who observed the Geminids in 2020. 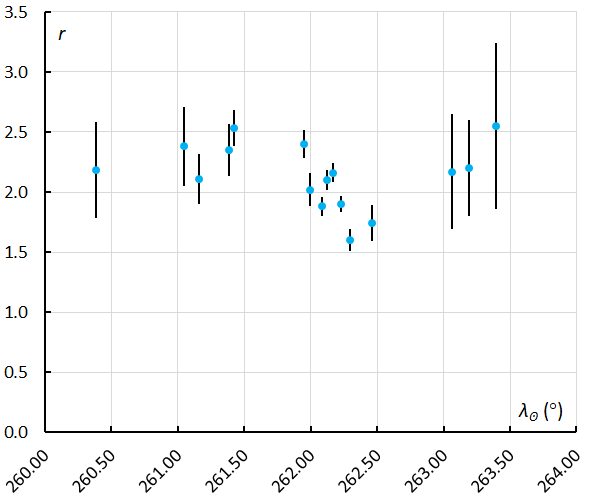 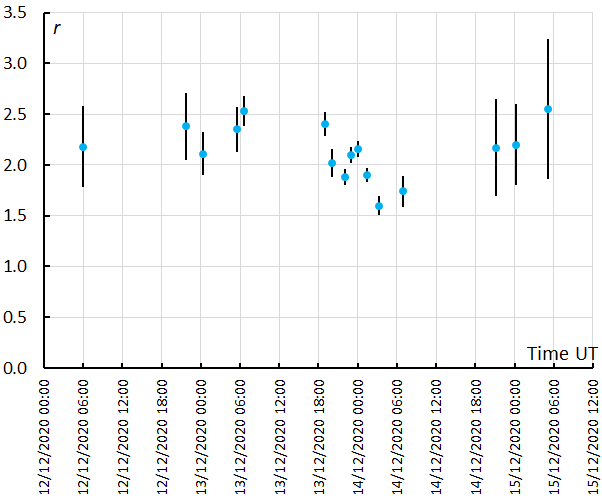 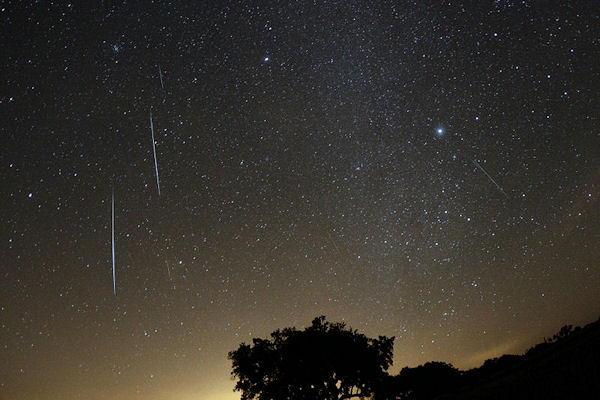 Figure 3 – Composition with 7 Geminids, captured at a location near Evora, Portugal, during the night 2007 December 14–15.
Photo and composition made by the author.

Table 3 – Overview of observations of many Geminid fireballs in a short time.

It is striking that the fireball observations from 2007, 2017 and 2020 partly overlap in solar longitude. The 2012 observation is an outlier that fell much earlier in solar longitude. It also seems that this phenomenon did not occur every year. The author will investigate this in a larger study of the Geminids in a future publication. 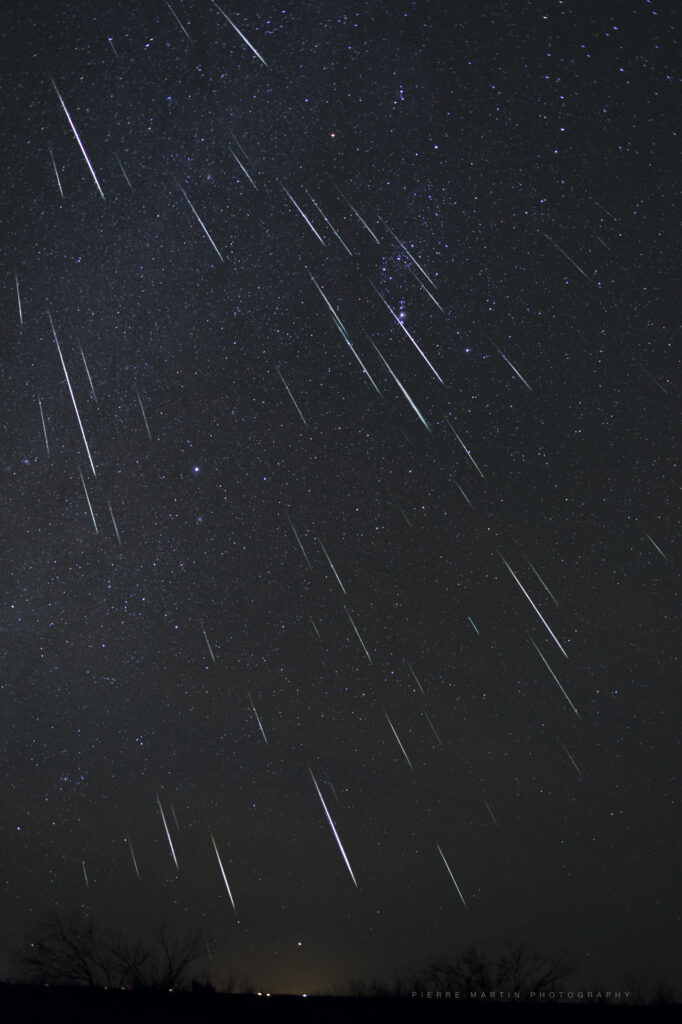 The ZHR could also be determined with the calculated population index r. In total, of the 7445 Geminids reported to IMO, 4808 were used for the ZHR analysis. The results of the calculations are shown in Table 4 and Figure 5.

During the maximum night (13–14 December 2020) we see indeed a peak around solar longitude 262.14° in Europe. However, this is a very low peak with a ZHR of 90 ± 4 followed by a declining ZHR. The question is whether this is the real peak or rather a sub-peak. However, the decreasing population index r (more brighter Geminids) after 2020 December 14, after 00h00m UT seems to confirm that this was the main peak. If this is really the case, the maximum ZHR value found is very low. The problem in this story is the higher ZHR values that are found at the end of the night and above the USA. Unfortunately, this data from only a few observers is based on relatively low Geminid numbers. It is also quite a late time for a major peak, but it has sometimes happened before in previous years.

Figure 5 – The ZHR of the Geminidsin 2020 (variable population index r, γ = 1,0). As usual, only Europe is well represented in the observational data.

Every eight years we can observe at almost the same solar longitude and almost the same phases of the moon. In the article about 30 years of Geminid observations (Miskotte et al., 2010; 2011) we looked at whether we could find something of a trend in activity over a period of 30 years. It was concluded that the maximum Geminid ZHR increased from 1983 to 1996/2004 (from 80–100 to 120–140) and then remained stable or decreased slightly to 100–120. There are good data sets from 1996, 2004 and 2012, so we can (cautiously) compare the data from 2020 with these years. The ZHR graphs from previous years have been determined in an exactly identical manner. Hourly counts were used, and an assumed r value was used with the population index r = 2.2 to solar longitude 262.2°, after that r = 2.00. The 2020 data was also calculated in this way. The ZHR values found hardly deviate from the curve with the r values calculated in this article. Figures 6, 7, 8 and 9 are results from these comparisons. 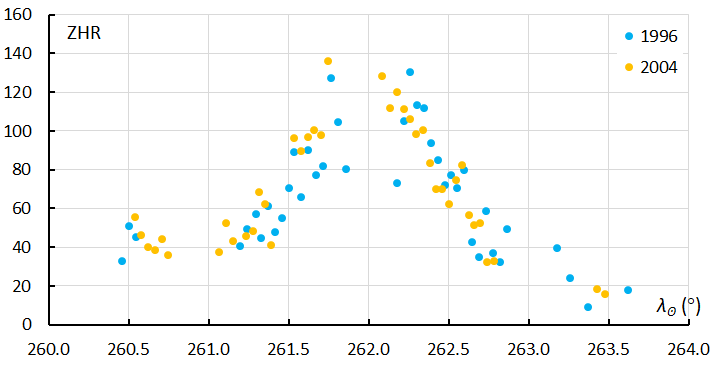 It is very well visible in Figure 6 that the activity and curves are comparable to each other. However, the graph of 2004 seems to have shifted slightly earlier in solar longitude compared to 1996. Both curves are of good quality based on 7531 Geminids from 1996 and 8340 Geminids from 2004. 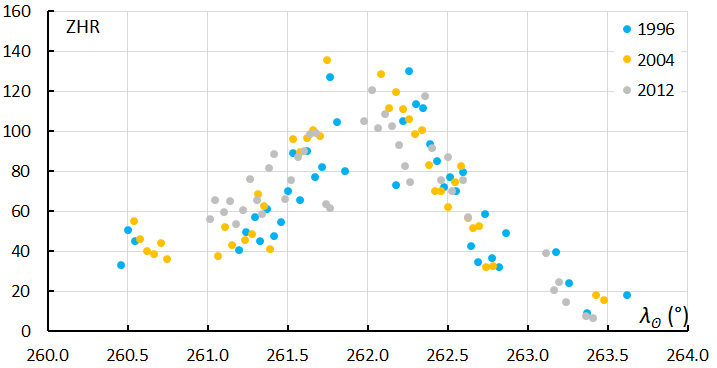 Some details require attention in Figure 7. In the period before the maximum (12–13 December), activity appears to be considerably higher in 2012 compared to 1996 and 2004, while the activity appears to be somewhat lower around the maximum. In 2012 there seems to be a dip in the activity profile that was also seen in 1996 (but not seen in 2004) around solar longitude 261.8°. The 2012 curve is also of a very reliable quality, based on 6650 Geminids. 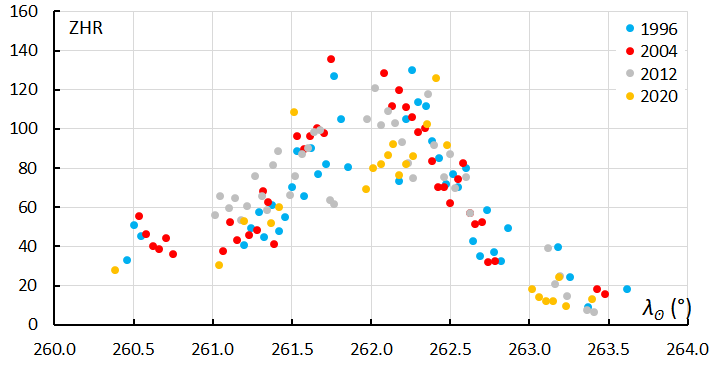 In Figure 8 it really looks like, with the exception of a few points, that the ZHR was visible lower in 2020. It seems a trend that confirms that we have had the most beautiful Geminid years in the past (1996–2004). The 2020 curve is based on 4733 Geminids. 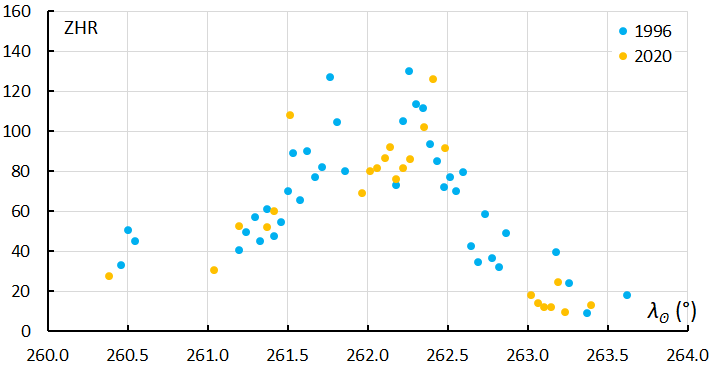 Figure 9 shows another comparison between 1996 and 2020, because this is the longest period (24 years). This clearly reflects the problem of a comparison between the 1996 and 2020 activity profiles. Part of the night 13–14 December 2020 observed from Europe has too few points to be compared with 1996. This is partly because we do not look exactly at the same solar longitude every eight years. And if we then look at the ZHR points of 1996 and 2004 at solar longitude 262.2°, then there is indeed some similarity between the two years, also in terms of activity. More research with overlapping years from other series will certainly follow in a future article.

The Geminids could hardly be observed from the BeNeLux, and it was also only moderately well observed in Europe. Nevertheless, a good result could ultimately be achieved. The expected maximum above Europe was weak. However, it is still not 100% certain that the best Geminids years are behind us. At best, there are some indications that this may be the case. It is clear, however, that the Geminid activity does not increase further compared to 1996–2004. This is in contrast to what is written in the article by Galina Ryabova and Jürgen Rendtel (Ryabova and Rendtel, 2018). The author hopes that good Geminid analyzes can be performed even more often in the future.

For the observers, it is highly recommended to observe in dark locations. The darker the starry sky, the (much) more you see! Observers are also advised to make a minimum of 10–15 hours observations in August so that Cp values can be calculated using hourly counts of the sporadic meteors. With these recommendations, both observations and analyzes will become much more reliable!

Many thanks to Carl Johannink, Michel Vandeputte and Thomas Weiland for their valuable comments. Also thank to Paul Roggemans for checking the English version of this article.