March is a rather difficult month for astronomy in the BeNeLux area. It is no surprise that March remains about the poorest month of the year for the network. Without any relevant activity from any of the major or minor meteor showers, hourly rates remain low. March 2021 marked the 9th anniversary of the CAMS BeNeLux network as the first stations of the network collected the first orbits in the night of 14–15 March 2012. What would March 2021 bring for the network?

The weather continued the same pattern we got end of February, the first week of March 2021 had some clear nights and longer periods with clear sky. The next ten nights were dominated by cloudy skies. The last period of March had variable circumstances with each night some clear skies, sometimes with almost complete clear nights. Only three nights in March 2021 remained without any single orbit (4 in March 2020). The best night was 5–6 March when 222 orbits were collected.

Figure 1 and Table 1 allow to compare the statistics for this month for all previous years. In 10 years, 217 nights in March allowed to collect orbits, good for 11330 orbits in total. Apart from few technical issues, motivation remains an important factor to keep camera operators continue their efforts after many years. A typical requirement for a successful video network is that there are enough stations and cameras available 7/7. This is one of the reasons why RMS cameras score very well. 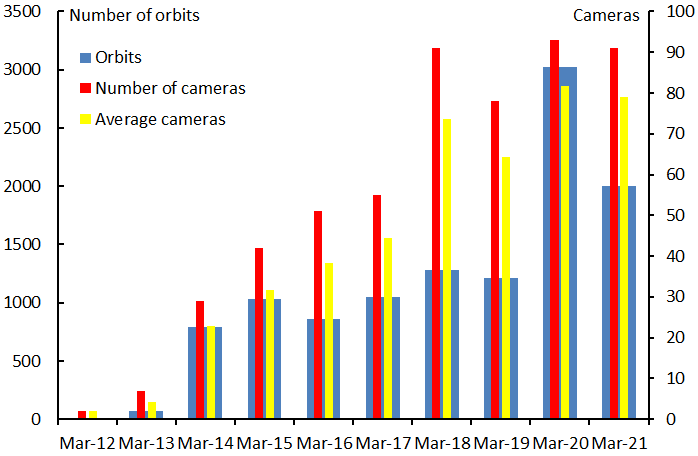 As many as 27 different camera stations contributed to the network, a new record. The network could welcome Ludger Boergerding as new participant with his RMS DE000B, alias CAMS 003801 at Holdorf, Germany. Contributing CAMS data since 15–16 March, this new camera helped to determine 56 orbits in its first successful nights.

March 2021 became a favorable month of March for the network with a nice number of orbits as result, the second-best result for this month in 10 years.