Abstract: A summary of the activity of the CAMS BeNeLux network during the month of April 2021 is presented. 3061 orbits were collected during 28 nights with a maximum of 91 operational cameras at 27 different CAMS stations. Favorable weather circumstances during the Lyrid activity allowed to monitor the April Lyrid activity for a fourth year in a row.

April is often a better month for astronomical observations after a general unfavorable first three months of the year. April also brings the Lyrids, a major annual shower with modest activity apart from some outbursts. CAMS BeNeLux got exceptional favorable observing conditions during the Lyrids 2018, 2019 and 2020, three years on a row. It seemed a bit unlikely to be lucky another year. What would April 2021 bring us?

The month started with one clear night followed by 9 mostly cloudy nights. Luckily the weather improved and remained stable until almost the end of the month. As many as 16 nights had more than 100 orbits (same as in 2020, 8 in 2019), 2 nights counted more than 200 orbits (4 in 2020 and 3 in 2019) and the best night was April 22–23 with 339 orbits, still much less than the record night April 21–22 in 2020 with as many as 460 orbits in a single night. Only two nights, April 09–10–11 remained without any orbit. For the fourth year in a row, the CAMS BeNeLux network enjoyed clear sky during much of the Lyrid activity. It would definitely be worthwhile to analyze the data collected about this shower by the network.

In total CAMS BeNeLux collected 15646 orbits during 238 April nights accumulated during the past 10 years. The statistics for April 2021 are compared in Table 1 with all previous months of April since the start of the CAMS BeNeLux network. Figure 1 shows the changes in number of orbits and operational cameras compared to previous years. 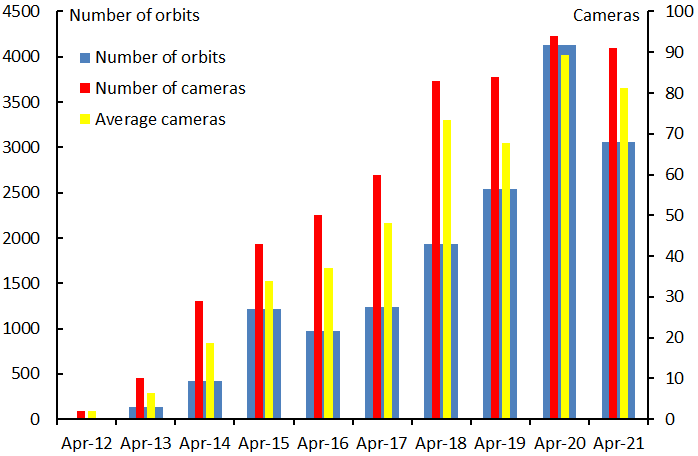 2021 brought another month of April with in general favorable weather for the CAMS BeNeLux network. Just like in 2018, 2019 and 2020 clear nights during much of the Lyrid activity period resulted in large numbers of Lyrid orbits.

Grazing meteor over Belarus and Poland on November 1, 2020